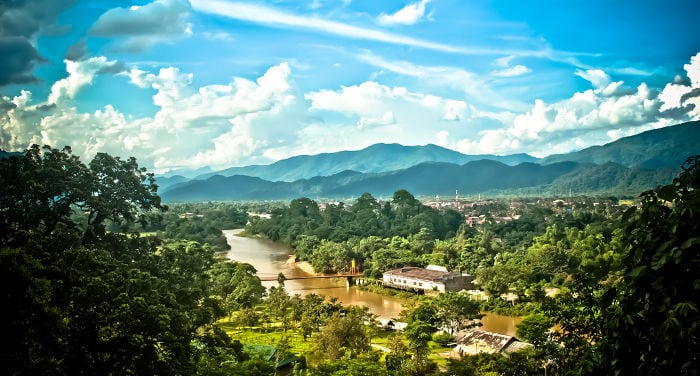 What was considered to be the favorite pastime during the tourist boom in Vang Vieng, was so-called “tubing”. Tubing is nothing more than a truck tire put into the water like a doughnut, which you sit on and get taken by the river’s current.

In addition, along the river there were bars where you could “dock” your doughnut and sit and drink beer or take some drugs.

Today the town is visited by many tourists each year, especially for its natural beauty like the Song River and the high mountains, a popular destination for international tourists into climbing.

The practice of tubing has instead lost its charm; and the bars and restaurants along the river near it are deserted other than happy hour when the sun goes down and you can enjoy a fantastic sunset on the river.

The perfect season for visiting Vang Vieng is from November to March, when it’s dry and rainy days are rare. Despite an average temperature of 25 degrees, I recommend that you bring a sweatshirt with you for the evening.

I was in Vang Vieng in March and the nights were rather cool; such as in the early morning, especially when it has rained the night before.

Some important things to remember before going:

How to get to Vang Vieng

By air (via Vientiane)

Unlike cities like Vientiane or Luang Prabang, Vang Vieng does not have an airport. So if you want to get to Laos by air I recommend that you take a flight to Bangkok, and from there take a flight to Vientiane.

Depending if you decide to go directly to Laos, and are therefore looking for a connecting flight from the airport in Bangkok (Suvarnabhumi), or if you decide to spend a few days in the Thai capital before continuing with your trip, you can choose between airlines such as Thai Airways, or the Asian low cost airline: Air Asia.

There are essentially three differences between the two airlines:

Once you get to Vientiane you can take a direct bus for Vang Vieng. However, there’s not connection from the airport that will take you directly to Vang Vieng from the airport; you’ll have to take a taxi and have them take you to the north bus station in Vientiane.

Usually, if you book with a minivan, they’ll bring you directly to from hotel; if instead you go by bus you’ll be told where to go (most of the time in front of the agency where you bought your ticket).

From Vang Vieng you can also get to other Lao destinations:

When it comes to international destinations we have:

Where to stay in Vang Vieng

Vang Vieng has some sixty accommodations, between hotels, guest houses, and hostels. Prices can vary a lot depending on their location (buildings on the river cost more) and type of lodging (hostels are very cheap).

The lowest prices are probably the hostel Vang Vieng Rock Backpackers, where you’ll pay about 8 USD a night. The highest are at the Riverside Boutique Resort: 150 USD a night per room.

A good compromise is Khamphone Guesthouse. It’s not all that great a place but it has all you need, breakfast included. The location is excellent, since it’s close to the center and near various restaurants. On the left you’ll find various garages that rent bikes for just a few Dollars a day.

Click here for reviews of the best hotels and hostels in Vang Vieng.

Where to eat in Vang Vieng

There’s no lack of places to eat in Vang Vieng. In the middle of town you can find Lao restaurants where you can have pancakes for breakfast and vegetarian noodles for dinner. The majority of restaurants are open air and have couches where you can even watch television, which is mostly TV series from the 90’s such as Friends.

Prices are low, especially if you buy street food and go for one of the baguette or crepe vendors. A sandwich will cost between 1 and 2 USD depending on the ingredients.

Unlike Thailand, where cheese and bread are not that great, in Laos (thanks to the French influence during the Indochina kingdom) you can try excellent goat cheese, or actual European style sandwiches.

What to see in Vang Vieng

The city is small enough to be easily covered on foot or by bike. In the center there’s practically nothing to see. It is interesting though to watch the sunset in one of the little restaurants that face the river and admire the city taking on a red-orange hue.

Just a few kilometers outside of Vang Vieng you’ll fin lots of things to do and many places to see.

Tham Jang Cave and the Lusi and Pha Poak Caves, are caves located a few kilometers from the city center. You can get there both on bike or by tuk-tuk.

Tham Jang is the more famous one, and is located north of the center of Vang Vieng. You can visit the cave by following a path built for that reason and admire its walls illuminated with colored lights (which call to mind the caves found in one of the islands of Hua Long Bay, Vietnam).

Pha Poak caves are reachable on foot in about twenty minutes. The entrance price is 10,000 Kip, and once inside you can even climb the rocks for 20 minutes until you reach the top, where you can enjoy a great view of Vang Vieng.

The best place to visit in my opinion is the Blue Lagoon. To get there you can rent a bike in the middle of town and pedal for about a half hour amid the little roads that cross typical Lao villages.

If sports aren’t your thing, you can also get to the lagoon by tuk-tuk, or rent a scooter. Pay attention though to the fact that the roads aren’t paved.

Regardless of your choice of transport for getting to the lagoon, you can admire almost untouched nature where cows graze freely during the trip.

Entrance to the lagoon costs about 2 USD a person. Inside you’ll find a meadow where you can lay out in the sun; a small restaurant where you can eat some local food (nothing special!); and obviously the lagoon, where you can find refreshment after a long pedal.

The ticket also includes entrance to the Tham Phu Khave Cave, also called the Golden Cave (in Italian: grotta dorata). This is an enormous cave, inside of which you’ll find a reclining Buddha statue covered in gold.

Moreover, in the city you can also participate in organized tours of all sorts, such as tubing: a tuk-tuk will bring you 3 kilometers north to Vang Vieng, and from there you can go down the river in your inflatable doughnut.

A more interesting choice is to do a canoe tour visiting the Tham Nam caves. This activity lasts a full day, from 8:30 to about 16:30; the price is 20 USD a person, and the minivan will take you directly to your hotel.

The first thing you’ll do is enter the Tham Nam caves. Since they’re filled with water, you’ll have to sit on a tube identical to the one used for tubing, and hang onto a cord that will serve as a handrail for your trip through the cave. This activity is done as a group so you’ll be asked to leave all your personal effects in the minivan.

I don’t recommend that you bring valuable objects like cameras or your passport, because despite what your guide might tell you, the minivan will be unattended for some time. Remember too to bring a change of clothes because once you get out of the cave (you’ll be in the water for more or less an hour and a half), they’ll arrange for a lunch on stone tables located at the entrance of the caves.

After eating you’ll be accompanied along with your group to the banks of the Song River and from here, two by two, you’ll go down the river in a canoe. The water is really low and there’s lots of rocks at the surface and lots of eddies as well. It’s still a nice activity to do, if only for admiring nature.

During this descent you’ll certainly see people tubing, and notice the bars (almost totally empty!) along the banks of the river, where at a certain point your group guide will have you stop to rest and drink something.

Besides tubing, the canoe, and the caves, you can also find tours that offer tours like mountain climbing, yoga or pilates, and even ziplining (going between trees thanks to metal “vines”). This last activity has become very popular in Asia, especially in places like Thailand (especially Chiang Mai) and Huay Xai (in the north of Laos), thanks too Gibbon Experience.

An activity for the more daring is a hot air balloon tour. You can hover over Vang Vieng for about 40 minutes, for the price of 90 USD a person.

Hot air balloon tours leave twice a day: at sunrise and sunset. If you’re a morning person you can choose the first option and enjoy the sunrise. A tuk-tuk will take you from your hotel at 5:40. For the sunset, the tuk-tuk will get you at your hotel at 16:40.

Vang Vieng is a relaxing and peaceful place to spend a few days during your stay in Southeast Asia. Personally I wouldn’t put it on the same level of places like Luang Prabang, neither for the atmosphere or beauty or charm.

A major problem is that Vang Vieng has undergone (especially since before 2012) an enormous influx of Western tourists. The local population was and still is very concerned about the negative impact that low cost tourism (the so-called backpackers) is having on the city.

Because of the continuing deaths of drunken and drugged out tourist in the Song River, the population of Vang Vieng has decided to avoid carrying out any daily activities, like bathing or washing clothes, in the river. The belief is that due to so many deaths, the water of the river is infested by evil spirits.

The concerns of the local people has moved the Lao government and the department of tourism to begin an awareness campaign to teach tourists (especially Australians and Koreans) how to respect the local customs in Vang Vieng. It’s not for nothing that the newspaper “The New Zealand Herald” wrote that “if teenagers ruled the world, it would look like Vang Vieng”.