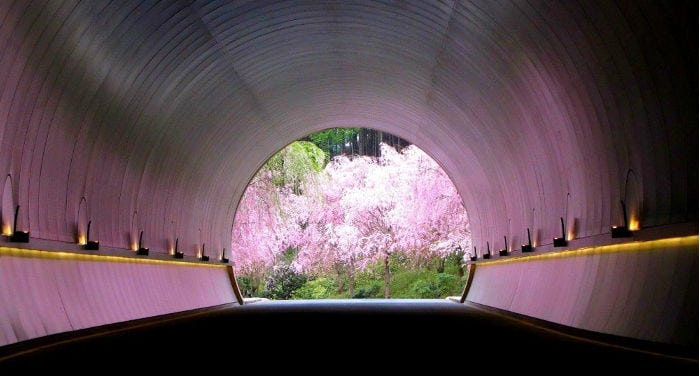 Last month I visited the Miho Museum, in Japan.

It’s an exhibition building located to the southeast of Kyoto, near the city of Shigaraki.

This article is not however a tourist guide, there’s no train prices, schedules, detailed road directions or things like that.

For that sort of information there are already many sites, like this one.

I wish to instead tell you of a travel experience in a place deeply permeated by Asian culture.

In this way, if I’ve inspired you to visit here, you can perceive and understand each detail of this place.

The Miho Museum is a building completed in 1996 by the Chinese naturalized American Ieoh Ming Pei, famous also for his other works such as the pyramids of the Louvre Museum in Paris.

It is a building totally immersed in nature and far from civilization, since it is located on the side of a mountain in Ishigaki Prefecture, near Kyoto.

Getting to this place is rather complicated, you’ll need to take the train from Kyoto and stop in Ishiyama.

Next you’ll have to take a local bus for about an hour of travel.

Inside you’ll find a selection from the private collection of Mihoko Koyama (1910–2003), one of the richest women of Japan and heir of an important Japanese textile firm.

The collection has works of art from ancient Europe, mainly Greek, Etruscan and Roman. 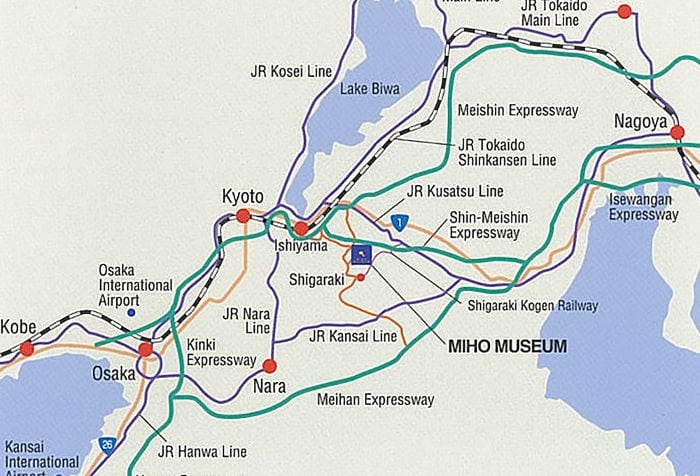 But what does this building have to do with China?

Not just the origins of its architect, obviously.

This is an ancient fairy tale of a poet named 陶渊明 (Tao Yuanming) who narrates, in a utopian way, the lives of men in contact with nature.

The fairy tale tells of a fisherman who along with his boat arrives at a river in a forest made up completely of peach trees, where the ground is covered with peach petals.

When he arrives at the end of the river, he notices a weak light coming out of a cave and decides to go in. The cave turns out to be a very narrow and torturous tunnel.

With much effort the fisherman manages to cross it and right away finds himself in front of a village populated by animals and people of all ages. He arrived in Shangri-La.

These people lived in harmony with nature and were very welcoming and friendly toward the fisherman.

He in turn made the best of the welcoming nature of the village, staying there for a week, at the end of which he decides to leave the village so as to return to his loved ones and tell them of such a peaceful and magnificent place.

He marked the road back but never manages to find again that place out of time.

Let’s now try to analyze and identify the elements of this story so as to understand its connection to the museum.

First there’s the theme of the trip, then the peach flowers, the tight and narrow tunnel, and lastly the welcoming village in harmony with nature.

The architect Ieoh Ming Pei used all these elements to provide a specific experience to everyone who visits the Miho Museum. 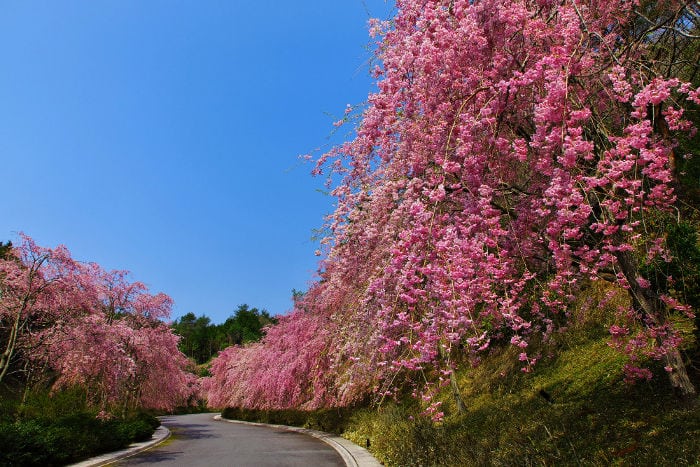 I already told you that the museum is located in an area that isn’t at all touristy and not well connected.

Arriving from Kansai Airport (Osaka), or one of Tokyo’s two airports (Narita and Haneda), it takes a while to get to Kyoto.

From Kyoto you need to get to Ishiyama and from there get to the museum.

You need to add another hour and a half/two hours to finally reach your destination.

Normally, traveling for two, three or four hours to get to a museum isn’t a very widespread practice.

The trees in bloom

Not being an expert in botany, I can’t tell the difference between a peach tree and a cherry tree (Sakura).

Both are very beautiful and in Japan in particular are very much appreciated, so much so that there are festivals for observing the blooms during the Spring (mostly the cherry blossoms).

Given the popularity of cherry trees in Japan, it is probable that the architect thought to use this type on purpose.

Arriving at the bus at the entrance to the museum’s ticket office we can see (in the Spring) that the entire area is surrounded by trees in bloom.

Since the museum is located on a mountain, during the winter it is closed for a time.

In this way, it is open during seasons when trees are in bloom. 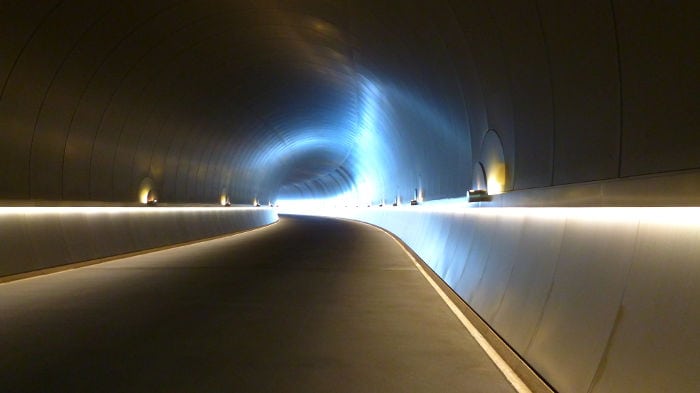 The ticket office is separated from the main building of the museum. It contains a small shop and restaurant that uses only products from the surrounding area.

The museum is a little higher than the ticket counter and to get there you need to cross a tunnel after a short climb.

The walkway between the ticket counter to the museum takes about seven/eight minutes on foot, but you can also take a small transportation system arranged by the museum.

The inside of the tunnel is covered by a metallic material that lightly reflects light. It’s not a straight tunnel, but is rather slightly curved.

In this way, standing at the entrance it isn’t possible to directly see its end.

The metallic material reflects the light coming from outside the tunnel, so you can perceive where it ends (“the light at the end of the tunnel”).

Only after crossing two thirds of the tunnel can you see the museum that comes up almost immediately. The museum turns out to be a sort of unexpected apparition (a little like Paul on the road to Damascus). 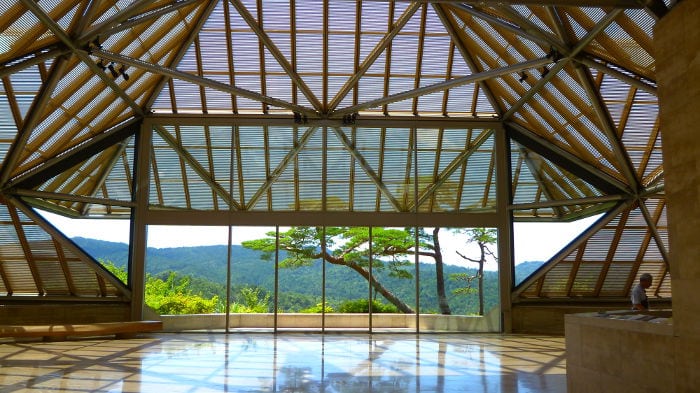 The museum presents itself as a small building and you access it after crossing a bridge through a small staircase.

As soon as you come through the entrance, you’ll find yourself in its hall.

Here, a large stained glass window that overlooks the valley welcomes us after such a long trip.

There’s a Chinese pine located right behind the large stained glass window overlooking the valley. The architect has placed this tree in that position on purpose and a little brace has lightly pulled it toward the bottom.

At this point a Westerner and Oriental will probably notice different elements and it is in this moment that the museum truly gives us a welcome.

A Westerner will certainly notice the beautiful landscape that can be seen from the museum’s atrium and note the Chinese pine, perhaps seeing it as a sign of harmony between man and nature.

Perhaps they will note the combination of materials and then move on to visit the museum.

An Oriental arriving at the museum will first notice the pine behind the stained glass window and will feel welcomed by the building. Maybe you’re asking why they would feel that way.

That type of tree in the Chinese language is also called 迎客松 (loosely translated as “welcome pine”).
It is a type of tree that is common in Chinese and Asian paintings.

These types of paintings were (and still are) traditionally hung in halls and entrances of homes (and also in meeting halls and restaurants) to give a strong message of welcome and reception to guests.

For this reason, a Chinese person, a Japanese person or a Korean coming to this museum will feel as if they have returned home after a long trip.

Because the large window and the pine are truly too strong a symbol to not be noticed.

The return to civilization

Leaving the museum and returning to civilization requires that you go back across the same bridge and same path in the opposite direction.

Since the tunnel isn’t straight but lightly curved, you’ll note that this welcoming and peaceful place will slowly pass from view.

And in the moment that you turn and can no longer see it, you’ll save the memory of it and your mind and heart.

Born in China but raised in Italy, after graduating in Architecture Luca decided to come back to his mother country to find his own way and identity. At the moment he lives and works in Shanghai as an architect. During his free time, he teaches Italian language to young Chinese people and writes short novels.