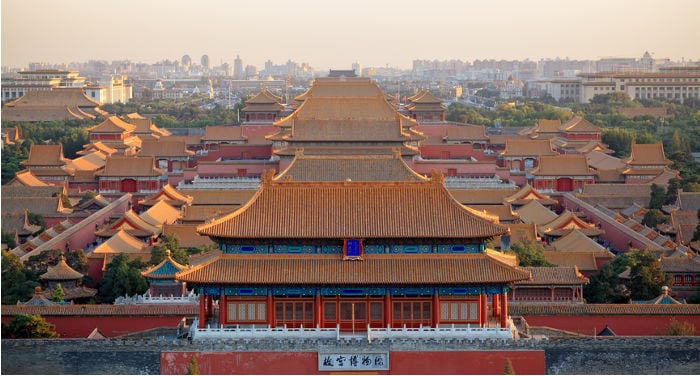 View of the Forbidden City from the Coil Hill

The first time I came to China, I only had one week. I had never left Europe before and I could barely speak English. So, I contacted a travel agency and took a tour. If you are looking for general information about China tours, click here (you’ll learn how to spot an honest travel agency, what you need to come to China and much more).

If you’ve already decided to book a China tour but aren’t sure what travel agency to choose, we can suggest a reliable agency to you. Click here to contact us and we’ll get back to you as soon as possible.

If you already live in China, I suggest you visit Beijing by yourself. Nowadays, you can reach the capital of China by train or plane from pretty much any Chinese city. Also, Beijing is quite safe and public transportation is good, so you shouldn’t have any particular issues. If you need some tips on booking a hotel or hostel in China, just click here.

Also, if you’re an experienced traveler and have more time than money, you can certainly come to China alone (unless you’re heading to Tibet, in that case you need a travel permit that only a licensed travel agency can provide).

So, when should you think about booking a tour of Beijing

If you, like me in 2008, have never traveled to China and have more money than time, then booking a tour is your best bet: Beijing is a huge city and it’s extremely decentralized. This means that moving from one attraction (let’s say the Summer Palace) to another (let’s say the Forbidden City or the the Temple of Heaven) may take you hours if you don’t know how to move around.

However, if you join a tour, especially a private tour as I did, you’ll be able to visit up to three attractions per day and you’ll be able to see all the best spots in Beijing (see the last part of this article for the details) within four to five days.

How many days do you need to visit Beijing?

As I just said, if you join a four to five day tour, it should be enough to visit all the most popular attractions in Beijing. You may also want to delay your return flight a day or two in order to get lost in town by yourself. It’s a wonderful experience, especially if you have never traveled in China.

What is the best time to visit Beijing?

You can visit Beijing at any time of the year (I went there in late January the first time). However, I’d say that September-October is the best season, as it will be around 25º Celsius and there will be a good number of sunny days. The winter is dry and cold, really cold. Summer is way too hot and it rains a lot. Spring is OK but you’ll have to deal with the rain and the sand storms that hit the capital quite frequently.

Which are the most popular tours that include Beijing?

If you’re coming from far away, let’s say the U.S. or Europe, then it’s a pity to only visit Beijing. The most popular tours that depart from Beijing but allow you to also visit other Chinese cities/provinces are the Beijing-Xi’An-Shanghai Tour (8-10 days) and the Beijing-Xi’An-Guilin-Shanghai Tour (12-14 days). Some people prefer to take a cruise on the Yangtze river instead of visiting Guilin.

Powered by GetYourGuide. Become a partner.

Things to do and see in Beijing

There are endless places to visit in Beijing. Here, I’m only going to list the most famous attractions, that’s to say, the ones that you can reasonably visit in five to six days with a tour and seven to nine days if you’re traveling by yourself. Let’s get started!

I could keep going on forever: Beihai Park, Houhai Lake, Xi Lake, the Bell Tower, Beijing University’s campus, Wu Dao Kou and San Li Tun (for the nightlife), the Ya Shou in San Li Tun or the Silk Market in Guo Mao (if you fancy fake clothes), the Olympic Stadium, The Opera, Gulou, Dong Zhi Men, the zoo, the traditional theater, the KTV (Chinese karaoke; trust me, this is different from what you see back home), the 798 Art district, and so on.

What is the difference between Peking and Beijing?
Peking is the former English name based on the Latin version of the name of the capital. However, during the implementation of pinyin (a phonetic transcription of Chinese characters into the Latin alphabet) in continental China, the official way of phonetically transcribing the capital became Běijīng (or Beijing without the tone marks).
Do I need a tour to travel to Beijing?
A tour isn’t necessary, as visiting Beijing is easy and safe. Nonetheless, the city is huge and contains infinite places of interest, so a tour can help you to make the most of your time.
Do I need a tour to visit the Great Wall? Which should I choose?
It’s not necessary, but it is recommended if you don’t speak Chinese. Except for the most visited section of the Great Wall, Badaling (which can be reached by train), reaching the Great Wall is by no means simple, as you will have to take at least two buses (and the second normally isn’t easy to find), which means that it is advisable that you rent a private vehicle or go on a tour to visit it.

The majority of hotels and hostels can organize this visit, and many of them also offer tours, but if you want to plan it beforehand, you can contact us and we will recommend a good travel agency for the trip.

Where should I go shopping in Beijing?
Given that it’s a giant metropolis, Beijing has innumerable places to go shopping. Some of the most popular among tourists are: the Silk Market for counterfeit goods, Wangfujing for international brands and luxury products, the Zhongguancun area for electronics, the Gulou and Qianmen areas for souvenirs or Xi’dan for Chinese and Korean brand-name clothing.
What’s the pollution like in Beijing? Is it dangerous?
Unfortunately, Beijing is one of the cities with the worst pollution on the planet (above all in winter) and the photos of its smog blocking the sight of everything are already famous. However, the situation is better than many people think and it’s been getting better over time.

For a tourist, pollution shouldn’t be a worry, as exposure for short periods of time shouldn’t be a health risk, unless you have respiratory problems. However, you should be careful with physical activity outside during pollution peaks, especially for sensitive people (children and the elderly).

Is it safe to travel to Beijing?
Beijing is probably one of the safest cities in the world, so it’s not necessary to take specific precautions. However, you need a bit of common sense to avoid little scams or thefts (which while rare, do exist).
What are the most common scams in Beijing?
Like any city that attracts tourism, Beijing also has its scams, especially in areas where foreign tourists are abundant. The most common ones are taxi drivers who don’t turn on the meter (the majority of these are out front of the Silk Market), counterfeit 100 Yuan bills (never let them leave your sight when you are paying in case they switch them out), students who invite you to drink tea with them which turns out to have an exorbitant cost (these tend to be looking for their prey outside of Tiananmen square) or art students that “force” you to buy a piece of paper with your name written in Chinese for a fortune (similar to the tea scam).

Are you looking for a travel agency?

If you’ve already decided to book a China tour but you aren’t sure what travel agency to choose, we can suggest a reliable agency to you. Just contact us using the form below:

p.s. Notice that we receive hundreds of emails every day and, sometimes, we can’t reply fast. At the same time, we assume that you want to get this info ASAP, so we’ll also forward your message to the agency we recommend. In this way they can get in touch with you much faster!