Skritter is, in my opinion, the best way to learn how to write Chinese characters.

I used it ten minutes per day for about one year and I managed to learn how to write more than 1,000 characters (all the characters on the HSK4 list, to be precise). Also, I learned the meaning and pronunciation of those characters.

Why do you need a software to write characters?

If you watched the video at the beginning of this post you already know that the software is pretty cool. 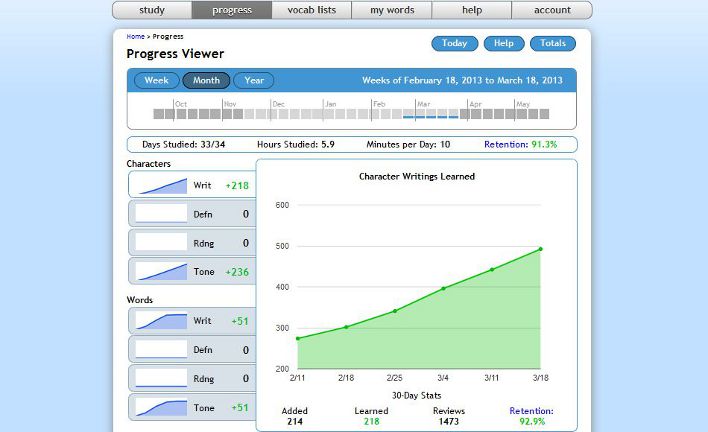 My stats with Skritter during 30 days

Skritter is a Spaced Repetition Software (SRS). I’ve explained what a SRS is here.

In a nutshell, when you review the characters by yourself you are often forced to review all of them without precise scheduling. Conversely, Skritter keeps track of your mistakes and shows you more often the characters that you still don’t know how to write.

When you are dealing with fifty or one hundred characters this may seem a small advantage. But when the characters sum up it translates in a huge gain of time.

Skritter costs 14.99 USD per month. You get a week of free trial, you pay month by month so you can unsubscribe when you want, 100% money-back guarantee and, if after a while you decide to don’t pay any more for your subscription, you can still keep using the software for free to review the characters that you have already learned.

If you prefer, you can also subscribe for 6 months, 1 year or 2 years, saving up to 50% on the monthly fee.

Finally, you can sign up to the free trial from one of the links on this page and use the coupon “SDC3952”. In this way, if later you decide to buy you’ll get a 10% discount on all plans.

How to use the software

Skritter has excellent applications for iOS and Android, where you can write characters directly on the touchscreen.

If you prefer, you can also use Skritter on your laptop. You have three choices: use your mouse, use the touchpad on your laptop, or invest in a pen tablet.

The advantages of learning how to write characters

The obvious advantage is that you learn how to write. But, in my opinion, there is a more important point.

Many Chinese characters are very similar. As an example, take the characters 青， 请， 清, 情 and 晴. They all have a similar pronunciation (qing, but with a different tone). However their meaning is different (they mean “green,” “to ask,” “pure,” “feeling” and “clear weather,” respectively).

When you only learn how to recognize the characters but you aren’t able to reproduce them from scratch (that is you don’t know how to write them), it’s easy to get confused. Especially when the characters are used to compose more complicated words.

Also, when you start to write characters regularly and learn the radicals, something amazing starts to happen. Let’s take the example from before, that is the word 游泳.

This is a fairly common word, it means “to swim” and its pronunciation is “youyong.” Even if I use this word quite often, in the past I’ve always found impossible to reproduce it. Also, I used to confuse it with 旅游，which means “trip” or “to travel.”

But once I’ve learned how to write the basic components of the word 游泳, writing it became easier and now there is no way that I confuse it with 旅游.

After reading a lot of material on the topic, using Anki for a year (an SRS that teaches you how to read characters) and Skritter for another year, I realized that there are a couple of common mistakes that people tend to commit. Here they are:

Other features of Skritter

Skritter offers a large number of features. Here is a complete list of them. Some of the ones that I like the most are the following:

If you sign up for Skritter by using the link on this page and the discount code “SDC3952”, you’ll get 10% off in all plans.