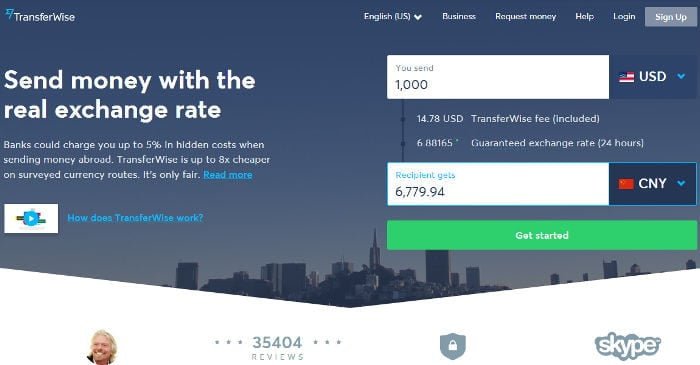 How to transfer money to Asia – Index

One of the most frequently heard problems of those who move to an Asian country such as Hong Kong, Thailand or Vietnam is that of sending the necessary money for initial expenses to their new country, without getting fleeced by the banks, who can make you pay up to 5% commission.

This goes not just for those who move for work, but above all for students, who not having a salary need to send the necessary funds from home to survive in their new country, such as Hong Kong, for example, for the entire length of study (even six months or a year).

How can you solve this problem? By using TranserWise!

Ps. I lost a ton of money transferring it via wire transfers up until last year. The reason is that, even if I was aware of the existence of Wise (formerly Transferwise), I never tried it because I thought it might be complicated and, moreover, I didn’t understand how it worked.

This is why, at the end of this article, I will explain in detail both how to use the service and the strategy (all legal and safe) that Wise uses and similar platforms to lower costs.

What is Wise (formerly Transferwise)?

Simplifying it to the extreme, TranserWise is an online platform that allows you to send money abroad that could save you up to 8 times what you would spend on bank commissions sending the same amount via wire transfer or credit card.

Wise’s commission is 0.5% for the majority of currencies; that commission can however increase depending on the currency.

To send USD from your bank account in US and receive Hong Kong Dollars in a Hong Kong bank account, for example, the commission is 0.5%.

If instead you wish to send Chinese Yuan in a bank account in China, the commission is 1.5%. Note that China is one of the countries with the highest commission, likely because the Chinese banking system is one of the most closed and complicated on the planet.

Important: Note that if want to transfer money in China, Wise only works if you send the money to a bank account opened using a Chinese ID card, not using a passport. This means that if the bank account was opened by a foreigner that lives in China, you can’t use Wise.

Even though I’ve tried to respond to the most common questions at the end of this article (especially the questions I was asking when I began using this service), the specific conditions can change depending on the country where you’re sending the money from, where you’re sending the money to, the method of payment used (credit card, wire transfer, etc) and other variables.

Here you’ll find an extremely complete list of frequently asked questions on how to use Wise.

All you have to do is go on TranserWise and open a free account by following the steps illustrated in the video above or, alternately, the following instructions:

Why do I save money with Wise?

If you have already tried to send money abroad (in a currency different than your own), you’ll know that the banks use an unfavorable exchange rate (a little like they do at the money exchanges at the airport).

So, besides the fixed rate for the wire transfer (which is usually about 10-20 USD, depending on the bank and the country where you’re sending the money), your bank will make you pay a “hidden” commission. This is why, as was already explained at the beginning of this article, you could pay up to 5% total commission.

Wise cuts those commissions by taking advantage of two factors:

Let’s say that tomorrow you want to send 10.000 USD to Hong Kong. If you use a traditional wire transfer, your bank will send the money directly to Hong Kong in a currency that’s different than yours (Hong Kong Dollars), offering an unfavorable commission (compared to the official exchange rate).

In this way, Wise receives your money without the banks applying a commission (since they receive the money in your same currency).

At this point, Wise sends the money in Hong Kong Dollars in the Hong Kong bank account you specified.

But, and here’s the “secret”, they do so by using their own Hong Kong bank account! So, even in this case, the banks can’t charge any hidden commissions since there isn’t any exchange of currency.

Wise makes you pay a commission (0.5%, in the majority of cases) because they obviously have to make something. However, that commission is much less than what you’ll pay in a traditional wire transfer.

Why is it that when using Wise the money arrives quicker than a normal wire transfer?

This method, besides saving you money, also saves you time (in most cases).

Note that the transfer times can vary between 1 to 4 business days depending on the countries of which you send and receive the money.

Sborto, who runs this site with me, just sent money from his bank account in Spain to the account in China of his wife, which is Chinese, through Wise: in his case, the money got there in less than 24 hours.

Is it safe to send money to Asia through Wise?

Wise uses companies regulated according to the laws of the various countries in which they operate.

It also uses an HTTPS encryption system to protect your information and allows you to follow your money transfers but on its internet site and on its app, available for iOS and Android systems.

Personally, I too transferred large amounts of money (last December I transferred more than 12.000 USD in just one transaction), and never had any problems.

In which Asian countries can you use Wise’s services?

Since Wise operates through countries regulated according to the laws of each country, it can only operate in the countries that allow this type of transaction.

Here you’ll find a complete list of countries from which (and in which) you can send money through Wise.

As far as China goes, at the moment it is possible to send money to China in all accounts that have a UnionPay card, that were opened using a Chinese ID card. The money can only be received in Chinese Yuan.

At the moment you can’t send money from China to a foreign country.

Can I also use Wise for my business?

Other than Wise, are there other similar services?

Yes, there are many such services. Here are a few: CurrencyFair, TransferGo, XE Trade, WorldFirst. Here on SDC we recommend Wise because it is one of the most widely used, because it allows you to send money to China (a detail not to be discounted) and, above all, because we have personally used it various times to send money from one country to another and never had any problems.

Chinese nationals, on the other hand, can send up to 50,000 US dollars a year, which is still pretty low, as the Chinese are keen buying overseas property, for example.

How can I transfer money with PayPal to Wise (formerly Transferwise)?
Go to Paypal.com and log in.
Select Wallet from the menu on PayPal.
Click ‘Link a Card or Bank Account’.
Select the option “Add a Bank Account”.
Choose your country.
Paypal Account is now ready to withdraw funds to Borderless!
Click Here to Immediately Open a Free Account on Wise