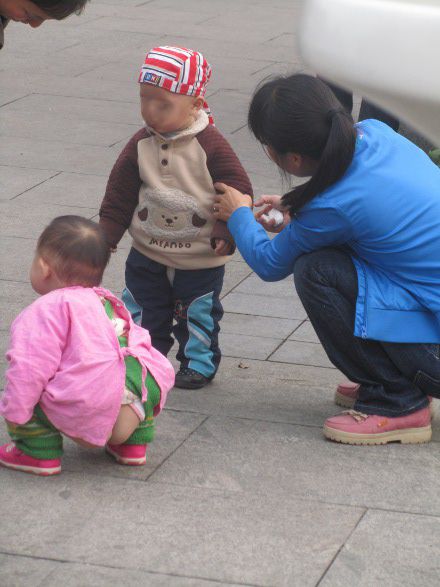 How to pee on the street…

Where do I start from?

The Beijingers that every summer wander with the t-shirt rolled-up on the stomach to get some fresh air; the Qingdao people puking in Pijiu Jie (Beer Street); the hygiene (?!) of the restaurants’ kitchens among the draining of dirty waters, garbage of epic dimension and fishes beheaded on the wet floor; the loud spits, so popular all over the Middle Kingdom; the parents that push the little children to pee on the sidewalks; the free burps at the office or the followers of Schwarzenegger that arrive at the gym without t-shirt and let a ring of sweat on each bench?

In Beijing even the taxi drivers get lost. Then they scream:

“Zai nar, zai naaar!” Where, wheeeere! And you can only shake your head and think “Why am I living here?” After three phone calls to the central and a far-sighted glance at the map, they seem to understand where they are but, just to be safe, they reach anyway the third ring. The result is always the same: taxis till you can see, traffic that moves slower than a lame turtle, and thousands of horns and curses that compose Beijing’s soundtrack.

When the average Chinese driver sees you in the middle of the street, he accelerates, honks, and points towards you… moving target.

When you breathe Beijing’s air for the first time, you ask yourself whether it was the right choice to sign a job contract for that famous multinational. And it does not matter whether you spend all your money on Marlboro red or your lungs are still virgin: after a couple of months, you will get the smoker’s cough anyway.

Three days after I landed I bought a couple of running shoes for 100 kuai. I thought it was a great deal, but after twenty minutes of outdoor training my lungs were burning and my knees were completely fucked up by the cheap sole.

When I left Beijing, the situation improved a bit but if you like vegetables and you take the train to Shanghai, make you a favor and do not look outside: the countryside is dying, the vegetables almost gray.

When I was living in Europe, I used to feel guilty when I was eating French fries for two days in a row – I’m a frustrated health fanatic, – here in China I feel guilty when a eat more than half lettuce per day.

Maybe it’s because Chinese people are a lot. Or maybe because the right to privacy is, as the welfare, a European concept destined to sink into oblivion. Anyway, when you arrive from Europe, you feel naked. Intellectually, I mean.

The experience starts already in the plane, where Chinese feel free to peek at the screen of your laptop. To stare at them does not work, they are too busy decoding the documents you are working at. There are many situations that make you think the idea of “privacy” in China is something different from what we intend. An example? Once I went to the hospital to make the blood tests and I reach a little front office, the one where you usually pay the fee or ask for information.

However, the girl at the window got a needle, took my arm, and filled three vials of my blood right there, in front of a line of people looking at the white devil. 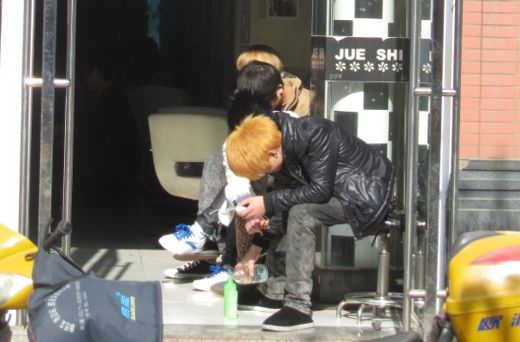 All male. Terrible. You can tell them whatever you want, bring Yao Ming as an interpreter, or show them that pic where your hairstyle looks so cool.

Invariably, they will try to shape your hair as Jacky Chan, a style they are really proud of! Don’t try to argue, it does not work. They get all emotional and cut your hair off. Finally, to close your shirt while you are cutting my hair seems too much, right? 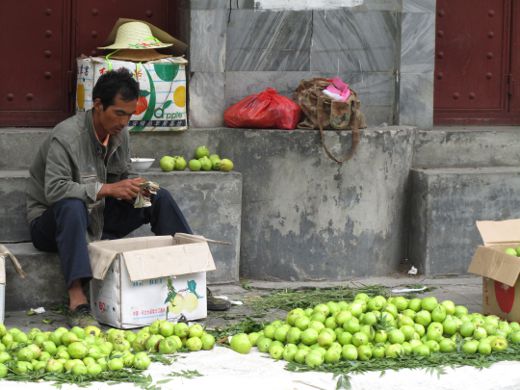 “kuai kuai kaui!” is the mantra you hear along the streets of Beijing, where there is not a market: Beijing is a market.

Luxury market at Xidan Square, Wang Fu Jing or the Village in San Li Tun; antique market at Liu Li Chang; fake market at the Ya Shou or at the Silk Market in Guo Mao; farmers’ market through the secondary streets full of villagers that come at night riding their horses and run away every time the police arrives; sex market inside the red light massages parlors.

I detailed the Chinese Railways system in a previous post. The trains connect all of China (even Lhasa, the capital of Tibet), they are cheap and always on time. All main towns have modern subway systems and where this is not true, as in Hangzhou, they are building it.

At night my favorite way to travel is by taxi. You find them everywhere and the price is quite affordable (about ten euros for an hour). Also, during my (almost) two years in China I never met a taxi driver that tried to scam me. You only need to pay attention to the “black taxis” but they are usually quite easy to spot as they do not have “official” badges.

I’ve traveled around this country, often alone; I’ve crossed the back alleys of Shanghai, Pechino, Chengdu, Nanjing, and Guangzhou at four a.m.; I’ve argued in several clubs for “women matters” with quite annoying (AKA jealous) Chinese guys; and so on… I know these are not really “dangerous” actions, I’m not trying to appear as Indiana Jones. My point is that I’ve been around for a while and I NEVER had any problems: I never saw a bag snatch, nobody tried to intimidate me for a dime (if you have ever been near The Central Station of Milan you know what I’m talking about, just to name a place). Even the fights in the clubs are quite rare when compared with the ones you see in the West.

Now do not think China is the Fairy Kingdom, you need to be careful as everywhere else. However, the main risks here seem to be the classic scams for tourists that you can avoid with a bit of common sense.

What I want to say is that nowadays I feel much safer in China than in any Western metropolis, no matter if the reason is the massive presence of the police in the streets, the harsh sentences for any crimes (especially the ones against foreigners that make lose face to the whole country) or the fairness almost naïve (from the point of view of an Italian, at least) of many Chinese. 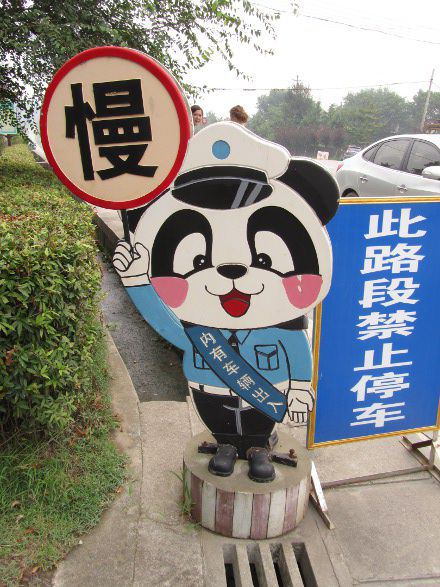 “Police man” in Chengdu, the capital of pandas.

Even if I love to go back to Italy for holidays after two weeks far away from China I start to miss what I call “The big Chinese mess,” which is somehow difficult to describe and would be reductive to define as a “huge crowd.” Nope, you can find a crowd of people also in London, Paris or New York. But a Chinese crowd is unpredictable, chaotic, almost in unstable equilibrium.

It always seems something is going to happen, a fight for a girl, a fire caused by a vendor of roasted potatoes, a riot because of an injustice. And you must always push, claim your space, pay attention to do not being knocked down by a three-wheeler full of giant bottles of water. It always seems there are too many people, too much noise, too many goods on the sidewalks, and too many bikes on the streets.

But in the end, nothing happens, the traffic regulates by itself, the fights almost never start, someone switches off the fire before it becomes too big and everyone keeps going on his way.

China, a country that surprises you every day, makes boil the blood on your arteries and makes you feel part of the world that is changing, part of the history. 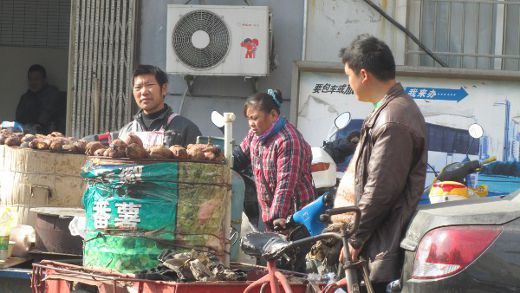 Dulcis in fundo… The women