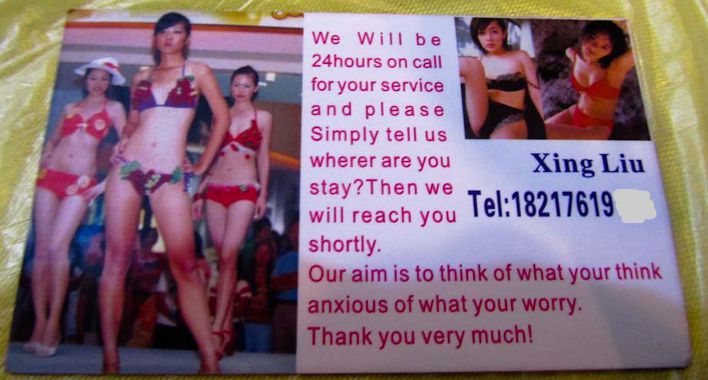 An example of business card you may get walking down Nanjing Road, Shanghai.

In Shanghai there are so many prostitutes that I got curious and I did some researches about prostitution in China. One of best source of information on the topics is Red Lights: The Lives of Sex Workers in Postsocialist China.

According to the local police, in China there are seven categories of prostitutes (see N. Dougherty’s master thesis for details):

Some facts about prostitution in China

A survey found that prostitutes were considered more trustworthy than government officials. Overall prostitutes ranked third on the list of professions behind farmers and religious workers. [Source: Insight China magazine, 2009]

In general, Chinese are quite ignorant about the dangers of AIDS. Prostitutes in China regularly have sex with men without using condoms. Fifty percent of Chinese think that AIDS is transmitted by kissing. [Source: asiahealthcareblog.com]

If you choose to pursue treatment for your STD while in China expect that positive tests will be reported to the Ministry of Health. This can complicate matters if you own a business in China, or if you like to go in and out of the country often.[Source: asiahealthcareblog.com]

Even if you don’t speak Mandarin, Chinese will still notice when you come home with a prostitute and they will talk about it. An American woman who had lived in Beijing for twenty years with her husband, one day found out that he had five girlfriends spread across China, several children, and at least a Chinese wife. How? Well, she overheard her Chinese neighbors talking about a white man that lived in the neighborhood and was seen with different Chinese women, one of whom had a half-Chinese child. [Source: asiahealthcareblog.com]

A Japanese restaurant in Kunming, Yunnan Province used to serves sushi on the bodies of scantily clothed young girls. They had their body chilled in an ice room before lying on a table to have food served on them. [Source:factsanddetails.com]

There is a demand for paying to take a young girl’s virginity. The price has risen since 2005, when prostitutes dressed as schoolgirls became fashionable in China’s sex trade. [Source: Stephanie Wang, Asia Times, 2009]