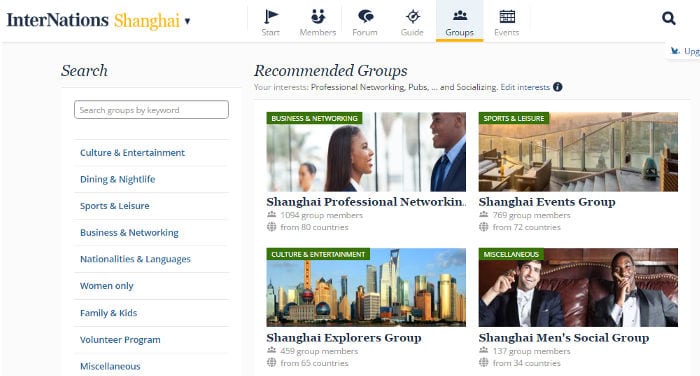 When in 2010 I moved to Hangzhou, in China, my excitement for the new adventure that was about to begin was certainly greater than the knowledge that I was moving to a city where I knew absolutely no one.

If you add that I barely spoke Chinese and had just signed a two-year contract to work in a laboratory where I was the only foreigner, there was little to be happy about!

The majority of those I knew were from just going around on my own and speaking to people.

These days however there are a whole lot of websites that allow you to get to know people – both locals and expats – that have similar interests to your own and that, like you, are looking for new friends.

Here are some that I recommend (according to your personal requirements).

Internations is, at the moment, the website that I prefer among those that allow you to meet interesting people (both on a professional and personal level). As soon as you sign up, the site asks for your nationality and where you live at the moment. It also asks you to choose from a long list of interests that go from generic ones such as “socializing” or “pubs” to much more specific interests such as “tango” or “startup”.

Once you finish this initial phase (which takes a minute), the site will automatically suggest groups, events and people that not only live in your city but are also compatible with your interests.

Pro: This is a website that is best suited to those who, besides wanting to make friends with new people, are also interested in creating a network of professional contacts.

Con: To access events and other advanced functions, after the first two events – which you can access for free – you’ll have to pay for a monthly subscription (starting from 5.95 Euro a month).

MeetUp is a website where it is possible to create or simply participate in events of all kinds. From jogging at 5 in the morning in Shanghai to vegetarian dinners in Suzhou, all the way to the unmissable Mandarin group studies.

In this sense, MeetUp is the website that most closely resembles Internations.

Pro: I already said, there are events and groups designed for all tastes.

Con: Perhaps because it’s free, if you’re between 30-40 years-old you could feel “old” at a MeetUp event, in the sense that the average age is lower (compared to similar events organized by Internations). Or at least, this is the impression that I had as well as those who I spoke with before writing this article.

CouchSurfing was, for many years, the reference site for those who love to travel with local inhabitants or those who, on the other hand, enjoy hosting or meeting travelers in their own city of residence.

Besides the “hospitality” factor, in many cities there are groups that organize weekly or monthly events.

Pro: It is probably still the most popular for those looking to meet people interested in travel.

Con: CouchSurfing, historically, was maintained by volunteers that organized events in their own cities. Since 2011, when it was sold to a private company (it was born as a non-profit organization), the majority of the “veterans” lost interst in the project. The result is that the site isn’t as active as it once was (and in many cities it has been supplanted by other sites or Facebook groups).

TED (acronym for “Technology, Entertainment, Design”) is a non-profit association dedicated to organizing conferences with the slogan “Ideas Worth Spreading”.

Besides conferences, in many cities there are TED groups that frequently meet more or less regularly to discuss various themes, though always based on a conference published on the TED site.

Pro: If you’re interested in discussing in a deeper way the themes “used” by TED this one is for you.

Con: In China there’s not much choice; there are few groups and plenty of restrictions.

WeChat (“Weixin” in Chinese) is often compared to WhatsApp. In my opinion the analogy doesn’t fit since WeChat has many more functions than WhatsApp.

Among other things, WeChat is also used to create groups with similar interests and those you can find on Internations or MeetUp.

Pro: Best suited for those interested in learning Chinese.

Con: Ditto as above; if you’re interested in meeting “foreigners” or Chinese that have a good level of English, then Internations or MeetUp are better suited for you.

I won’t explain here how Facebook works. If you don’t know LinkedIn, is a social site like Facebook, but geared much more toward those who are looking to create a professional network.

Pro: These are likely platforms that you already know.

Con: Facebook is blocked in China and to access it you’ll need a VPN; LinkedIn isn’t blocked but, compared to other countries, its penetration in China is limited.

In the early 2000’s, before the advent of social media, forums represented an important resource for expatriates, both to ask specific questions for those who already lived in the city in which you just moved to and to make new friends.

Even though in the last few years they’ve lost ground – to social media and more complete platforms like Internations or CouchSurfing, – the forums are always there, often managed by hardcore expatriates that organize weekly meetings at the same bar for 10 years (with Carlsberg beer and rugby matches).

Pro: You’ll meet long-time expatriates that were already in Shenzhen when it was still a fishing village.

Con: Many forums have taken an ugly turn and are now infested by people who are just looking for an excuse to complain about China.

To find the main forums in the city you’re interested in all you have to do is go to Google and search “Forum + [City Name]“.

My ten-year experience as an expatriate tells me that if you’re looking to find a long-term girl/boyfriend, it’s much easier to use one of the platforms listed earlier, meet interesting people and let nature take its course.

The main reason is that people active on dating sites/apps are often in crisis with themselves (like just being dumped), cheating on their wife (or husband) or they are, quite simply, looking for attention.

I know that what I just wrote is an enormous generalization. However, that was my experience and there’s often something to generalizations!

If instead you’re just looking for a little sex with no strings attached, then the dating apps are probably your best option.

Here are some of the most famous dating apps in China: Tan Tan (the Chinese Tinder), Momo and Tinder (only if you’re interested in expatriate boy/girlfriends).

Pro: Good for those looking for intimate relationships without any strings.

Last but not least: The bar

Maybe I’m a little old-fashioned, but many of the people that have had a profound impact on my life I met by simply going to the bar, by myself.

What is your preferred method to make friends when you move to a new city?