How to use the DiDi app – Index

If you don’t use DiDi you could have some problems in China. Sure you could always wave your hand at the side of the road and a taxi will still stop. But if it’s bad weather or rush hour, there’s no longer any hope of finding a taxi without this new app.

DiDi dache or DiDi chuxing (滴滴打车 or 滴滴出行) is the name of a cell phone app which makes it possible to contact both taxis and private cars with professional drivers.

In other words it’s like a local Uber. DiDi is not the only one on the market, but it’s certainly the most widespread and above all it has a convenient version in English.

There are two ways to use DiDi:

I recommend that you install DiDi and practice using it even for brief stays in China. 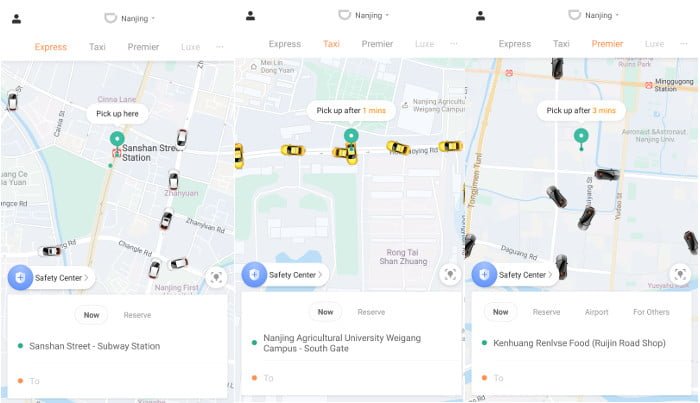 If you’ve already used Uber, DiDi won’t be difficult for you. You’ll have to enter your pick up location that corresponds to where the GPS shows your position (but always check, every so often the App has no references and places you near the nearest known point), or different choices. In the English App you can enter your location in both English and Chinese, but you can’t enter a shared location received via Wechat.

Next, insert your destination, again using the address in either English or Chinese characters, and then choose your type of course. Be careful when typing in the address in English because the translations are still a bit imaginative: at times it will say Zhong Shan Lu, sometimes Zhong Shan Road, and sometimes Middle Shan Road! So try a few times if your first attempt doesn’t produce any results.

With the exception of calling a taxi, it will always calculate the estimated trip cost, though it doesn’t include unexpected diversions or excessive delays due to traffic. But this will definitely help you to figure out if the driver is cheating you, also because once the trip has begun, on your App a navigation mode is activated that will show you the same road that DiDi is suggesting to the driver at the same time. With superior category cars, you can also see in detail how the fare is calculated.

This is all general information. Now let’s see the specifics on how to install it and how make a call.

What you need to install Didi

First of all you’ll need a Chinese cell phone number, which must be active and works. In fact the drivers will identify you by the last four digits of your cell number, and will call you if they have any doubt. Don’t worry, you can always fake that you don’t hear your phone…

The drivers can also contact you through DiDi’s own messaging system: there are a series precomposed messages so that you can have an easy exchange without falling into a lost in translation situation.

Moreover, the recent security system activated by Didi, the so-called DiDi Safeguard, makes a direct call to the closest police center and automatically notifies the emergency number you’ve inserted with a quick click. So your cell phone will be useful even if you run into an emergency situation.

Secondly, you need to enter a method of payment that is one of the ones listed on DiDi. Some have told me that a foreign credit or debit card will work, but I don’t have any direct experience with that. The other forms of payment, are all tied to a Chinese card or an Alipay or Wechat account connected to a Chinese card.

I’ll give you a little tip: think opening an account in China is crazy? If you already have a friend that lives there, they’ll surely already have everything necessary for managing money: Alipay, Wechat and a bank account. You can opt for a transfer from your Wechat wallet, which you can connect with DiDi. This means that you can use Wechat’s debit function to pay for your DiDi rides.

Obviously DiDi works on smartphones with a GPS system without a hitch. 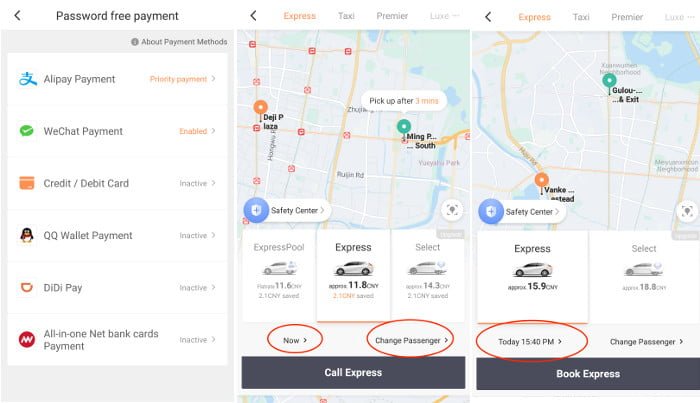 How to install DiDi on your cell phone

Once you download the App you’ll have to enter your cell number (which is your identity!) and a method of payment. If for some reason while downloading the App it doesn’t download immediately in English, click on the little flower symbol for settings and choose the second heading in the menu, where you’ll find English.

You can additionally enter your preferred addresses right away, which for now is really just two choices, Home and Company. You can change them as much as you want, so if you’re traveling no one will keep you from adding your hotel address for every stay.

I also recommend that you quickly take care of the safety settings so that you don’t have to deal with the thousands of notifications from DiDi which will advise you to add emergency contacts or to enable trip registration.

At this point you’re actually able to fully use the App and its functions. The important thing is that the payment method is correctly installed. If you’ve decided to use Wechat or Alipay, check to see if you’ve adjusted the settings for automatic payment on the respective Apps: if not, it means that you’ll have to approve payment at the end of every trip.

This isn’t a problem, but if you’re too late to pay because you forget, the drivers will start giving you a low score (of course, users too receive feedback in stars) and your search on DiDi in times of greatest need will become increasingly arduous since your score lowers you in the classification of clients.

It’s the same thing for drivers, and I recommend that you always grade them carefully and honestly. If you’re not satisfied with your trip, you can even avoid using the same driver in the future by clicking on the option that’s on the bottom of the screen.

The type of rides that DiDi offers

What is the difference between Taxi and Express

Taxi cars are generally much more rickety and less clean than those of private cars; but taxi drivers are great experts on traffic, so if you don’t fear the fictional Chinese driver but you need to swiftly reach your destination, I recommend a taxi.

This is also because DiDi drivers tend to stick to the route suggested by the DiDi navigator, even when these are jammed with traffic or less convenient, whereas a taxi driver will more easily take you on an alternate road.

An annoying detail that I noted when taking taxis and Express is that often these vehicles hide the seat belts in the back seats behind the seats themselves, or under the seat covers, or that they’re so old that they’re useless. Traveling often with my daughter, it’s been a problem for me: in fact in China car seats are not obligatory and you won’t find one available, even when booking the car in advance. A seat belt therefore remains the only form of security for babies.

The Chinese usually prefer to travel with Express or even ExpressPoll because they can save a little bit. But all things considered, for long trips, choosing a Premiere is maybe just another 5 € more for a service and driver that is much better.

How to book a car with DiDi

The typical situation is: I have to take a train or flight or I arrive at the airport – even at unfortunate times. No problem: choose which category of car you want to use and click on “reserve”.

With this function you can change the date and time of your ride. If you opt for a Premier, there’s already an airport option from the list on the menu, including the flight number in case the driver has to come get you upon arrival. Or enter the destination that you’re interested in and reserve.

Drivers like to give you a call to confirm, especially if you go to the airport or are waiting for a long drive. Now you know…

In addition, you have the chance to use all of DiDi’s functions, even for a friend, changing the passenger name: click on “for others” or “change passenger”. Fill out the required data and the charge will be made on your phone.

Quick guide on how to take a trip in ten steps

Can you use cash for DiDi?
Yes, as mentioned above, you can use cash if the car was booked via Didi.
Does Uber work in China?
No, Uber decided to pull out from the Asian market, due to too high competition from other companies like Grab (the most popular taxi hailing app in Southeast Asia) and Didi.
Is it safe to travel with Didi in China?
Yes, it’s considered safe to travel with Didi, even if there’s been some incidents in the past. As China is such a big country, it’s unavoidable.
Do you tip taxis in Shanghai?
No, you don’t need to tip taxis in China, the drivers don’t expect any tip.
Can I use LYFT in China?
No, LYFT does not operate in China and Didi is basically your only option, if you want to book a car via an app.
Did Didi buy Uber?
Yes, Didi decided to buy Uber’s China Business for around 35 billion US dollars. The Uber Chief Executive of Uber China at that time decided to join the board of Didi.
How much is Didi Chuxing worth?
Didi Chuxing was worth 7.95 billion US dollars at the end of 2018. The value of the company has increased much in the past years and was valued at 5.97 billion US dollars at the end of 2017.
How many DiDi drivers does China have?
Didi has around 2 million drivers in 400 cities around China and in Brazil.
When was DiDi founded?
Didi was founded in June 2012.
How many customers does DiDi serve in China?
DiDi serves around 550 million customers in China.
How many employees does DiDi have?
DiDi has around 10,000 employees working at its headquarters in Beijing.
Who’s the founder of DiDi?
DiDi was founded by three Chinese nationals, namely: Cheng Wei, Zhang Bo, Wu Rui. Cheng Wei is the most prominent person, previously working at Alibaba Group in China. He currently has a net worth of 1.2 billion US dollars.