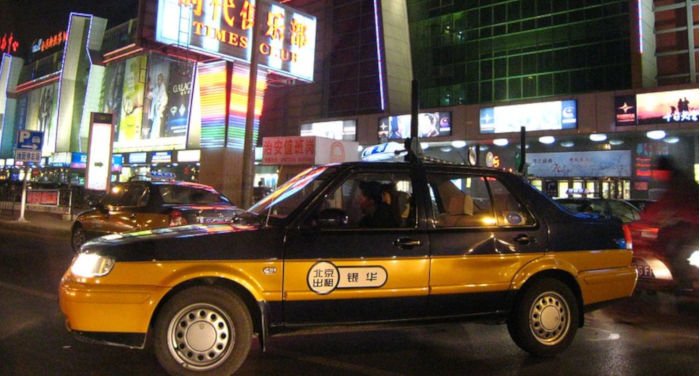 If you plan to travel to China, it can be worth to do some reading about how to get around by taxi. Not only is the culture different, but it’s also important that you know how much it costs and what options to use.

How do you get a taxi and can you communicate with the driver in English? Do you need to tip or not? These are just a couple of questions that you should know before you depart for China.

In this article, we reply to some of the most common questions related to taking taxis in China.

How do you hail a taxi in China?

Below I’ve listed the three different ways of how you can hail a taxi in China.

In the past years, China has become increasingly digitized and booking a taxi via one of its online taxi-hailing apps is probably the most popular. The biggest application in China is called Didi, which can be downloaded before you depart for China.

Hail a taxi by hand signal

Hailing a taxi by hand is still popular and means that you will ride with companies such as Dazhong, Qiangsheng, and Jingjiang. Keep in mind that the standard of the cars are generally worse compared to when booking a taxi via an online taxi-hailing application.

Besides, as the price is determined after the ride, they can take detours or try to set a fixed price before the ride starts.

Call a number and book a taxi
You can also call numbers to book taxis that differ according to cities. For instance, the number isn’t the same in Beijing as in Shanghai. Below I have listed taxi booking numbers in some of the biggest cities in China:

Can I use Uber in China?

As of 2016, Uber doesn’t operate in China as it pulled out of the Chinese market. Thus, you have to use the local taxi-hailing application Didi Chuxing, which can be used via WeChat.

No, most of the Chinese taxis don’t accept foreign credit cards. But, if you use Didi Chuxing, you can use your foreign credit cards to issue payment for their services. Thus, be sure to withdraw some RMB directly when you arrive at the airport or before you leave your home country.

Can foreigners use Didi in China?

Yes, foreigners can use Didi Chuxing and you can even download the application before departing for China. It’s widely used among foreigners as you won’t have to wait until you find a taxi and come across scammers.

Can I pay DiDi with cash?

No, you cannot pay DiDi drivers with cash. You have to register a Chinese or a foreign credit card. That’s one of the major drawbacks of using DiDi.

Is it safe to take a taxi in China?

Taking taxis in the bigger cities is safe and you don’t need to worry about theft, robberies, or assaults. On the contrary, the drivers are sometimes less safe, a reason why you’ll see that taxis in cities like Guangzhou have metal bars and plexiglass to protect the drivers.

Just be cautious as some drivers might want to set a fixed price instead of using the meter. Be sure that the driver turns on the taximeter right after starting the car.

And make sure that you didn’t drop any of your belongings when leaving the taxi. It can be difficult, if not impossible, to get them back.

Do you tip taxis in China?

No, the Chinese don’t expect any tip as it’s not part of their culture.

Are taxis expensive in China?

Taxis are still comparably cheap. Below I’ve included an overview of the fees for different cities, as shown on Numbeo’s website:

How much is a taxi from Beijing airport to the city?

It costs around 120 – 150 Yuan to take a taxi from the airport to the city center, depending on where you’re going.

How long does it take to get from Beijing airport to the city?

It takes around 40 minutes to reach the city center by taxi from the airport.

How much is a taxi from Shanghai airport to the city?

How long does it take to get from Shanghai airport to the city?

It takes around 50 minutes to reach the city center by taxi from the airport.

Are there two airports in Shanghai?

Even if some people claim that you can speak English with taxi drivers in Shanghai, it’s very rare. They might be able to utter a few words, like “Where do you come from?”, but it’s usually not more than that.

They are more than happy to converse with you in Chinese though, talking about everything from your home country, about China, politics, sports, and more.

How many taxis are there in Shanghai?

Having more than 100 taxi companies, there are more than 50,000 taxis in Shanghai.

How many taxis are there in Beijing?