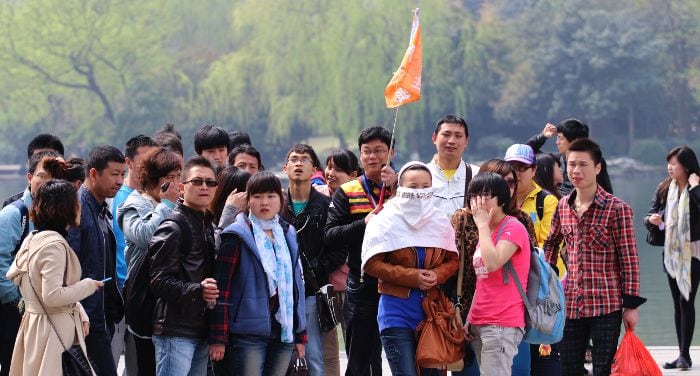 Last year I spent some months in Chiang Mai, Thailand. But China follows me everywhere. Or at least, this is the impression I got: there were Chinese tourists at every corner, every restaurant and every coffee shop.

The Chinese invasion of Chiang Mai

Why Chiang Mai became so fashion within Chinese tourists? It seems that it’s because of “Lost in Thailand“, a popular movie in China (the Chinese version of “The Hangover”, with less drugs and more kung fu).

Theorem: Since “Lost in Thailand” was shot in Chiang Mai. about every Chinese person with a passport is going to visit Northern Thailand in the following two years.

Corollary: Chiang Mai’s inhabitants got upset with Chinese tourists. So upset that Chiang Mai University started to charge a “visiting fee” to the hordes of Chinese tourists that arrive every day. Here a quote from the article that reported the news:

“Among the more bizarre incidents is Chinese tourists dressing up in the university students′ uniform and taking pictures with the university landmarks, Mr. Rome said, adding that the security guards detained four such tourists yesterday during their cosplay activity.”

This is just one of the many examples that I was able to find on the web.

This sounds like an oxymoron to me because a large chunk of Thai GDP is based on tourism and, overall, Thai people seem to be super friendly with foreigners.

Unless the foreigners are Chinese, I’ve discovered!

Disclaimer: Everything that will follow concern Chinese tourists that travel on a group tour. Chinese people that travel by themselves belong to a totally different class of tourists, probably the best as they don’t go to clubs and get super drunk (most popular hobby within Western tourist that visit Thailand after looking for prostitutes), they are super polite and spend a lot of money.

Am I surprised by this discovery?

Not at all! I had already noticed that Chinese people traveling on a group tour are, generally speaking, extremely rude, dirty and noisy (YES, more than Italian pigs like myself). A pain in the ass. A fucken tsunami.

When did I make this discovery? One week after I landed in China, while visiting the West Lake of Hangzhou. Yes, it’s in China that you’ll find the worse Chinese tourists, the ones that never traveled before, take a tour to Beijing or the West Lake and think they can behave as they do on their farmer village: smoking, screaming, eating, spitting and littering everywhere (and at the same time).

As an example, the last time I took the flight Shanghai-Hong Kong I had the joy to share the plane with forty tourists coming from Inner Mongolia (Northern China). They were all traveling together and, most likely, it was the first time they were going “abroad” (although Hong Kong is a Chinese Province, it’s a special administrative zone and you need to cross a border as if you were going to another country).

Beside the mess on the plane, which after we landed looked like a garbage dump, the funniest episode of the trip was during the queue at Hong Kong airport’s passport checkout. You know, one of those queues filled with elegant businesses men and shy Hong Kong girls that stare at their iPhone while an unreal silence fills in the room.

I can guarantee to you that, the day the Inner Mongolian horde of tourists landed, there wasn’t much silence. They started to overcome the travelers that were before them at the queue while letting a contrail of garbage behind them, screaming and, of course, eating chicken feet and other shit. One even lighted up a Yun Yan cigarette.

The Hong Kong police women at the border tried to stop the barbarians but there was nothing to do: they didn’t listen and grouped all together in front of the border counter.

Nobody really complained. Everybody (the Hong Kong police, the other Chinese travelers and the international business men) understood what was going on and everybody thought the same: let’s just let them go as fast as we can as it’s way easier to ignore their primitive behavior than try to deal with it.

I must admit that it was quite funny and that this mess is one of the aspect of China I miss the most every time I leave. But I must be a weird person: most of non-Chinese people can’t stand this behavior.

What is the reason for this behavior?

As I said at the beginning of this article, Chinese people that travel by themselves are completely different. My opinion is that they are well-educated, speak a least a bit of English and, generally speaking, know how to behave outside their farmer village in Shandong Province or their neighborhood in North Shanghai.

On another hand, Chinese people that take a group tour most luckily don’t speak any English and have zero interest for knowing more about other cultures. Taking a group tour allow them to travel without changing their habits: they can keep being impolite with waitresses or employees (in China it’s socially accepted), littering everywhere (in China there are armies of garbage collectors that “follow” the tourists and clean the place, but the rest of the world is different), smoking all the time (China is the only place in the world where I see people smoking at the airport, outside the smoking room), screaming at the phone, spitting on the floor, and so on. The list is quite long!

This explains why in Paris – but also in many other cities – there are “secret” Chinese restaurants especially built for the group tours that arrive from China.

The tourists take a pic in front of the Tour Eiffel and then go straight away to these “nice” restaurants where they can eat the very same stuff they it in Beijing or Shanghai. You may not believe me, but maybe you’ll believe Evan Osnos, who published a fantastic essay, “The Grand Tour: Europe on fifteen hundred yuan a day“, that describes the behavior of a Chinese group tour in Europe (he joined a tour before to write the essay). Here a short quote taken from the essay:

“We followed Li into a small Chinese storefront, down a flight of stairs, and into a hot, claustrophobic hallway flanked by windowless rooms jammed with Chinese diners. It was a hive of activity invisible from the street, a parallel Paris. There were no empty seats, so Li motioned for us to continue out the back door, where we turned left and entered a second restaurant, also Chinese. Down another staircase, into another windowless room, where dishes arrived: pork braised in brown sauce, bok choy, egg-drop soup, spicy chicken.”

So why they travel?

If they don’t want to learn anything about other cultures, meet different people, taste new food or doing anything they already do in China, so why in the hell they want to travel abroad?

They gain face among their social circle: being to Rome or Paris is a bit like displaying a Picasso on their living room. Since they can’t afford a Picasso, they take a twelve days tour to Europe so that, in less than two weeks, they can take a pic in Frankfurt, Paris, Nice, Venice, Florence and Rome. Awesome!

If you’re interested on knowing more about this subject you can read Pigs on the Loose: Chinese Tour Groups, a short essay written by Echo Wang, a Chinese girl that traveled around the world and, ashamed by the behavior of her compatriots, decided to write a manifesto against Chinese people that travel on a group tour.