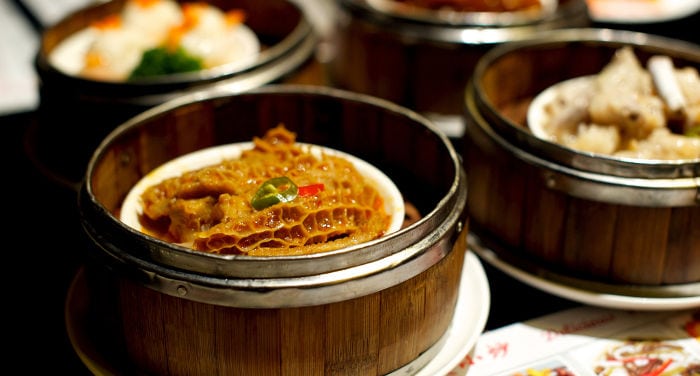 Chinese culinary culture (饮食文化, yinshi wenhua) is an indispensable aspect of Chinese life. As Confucius said: “food is the very first necessity of man”. Not to mention that, in China, it’s around the lunch table that business takes place.

Food and the language

吃了饭没有？(chi le fan mei you?), “Have you eaten?”, has always been one of the most popular greetings in the spoken Chinese language, which indicates the weight given to food in China. In modern times, however, 最近忙吗？ (zuijin mang ma?), “Are you busy lately?” is preferred, because the focus has shifted to work and activity.

Returning to the heading, the Chinese lexicon is rich with expressions tied to food, or specifically the verb 吃 (chi), “to eat”. For those who aren’t familiar with the Chinese language, observe well the character for “to eat”: you’ll see that on the left there’s the root 口 (kou), “mouth”, naturally tied with the act of ingesting food.

For example, the ability to cope with troubles is noted with 吃苦 (chiku), literally “to eat bitterness”. If someone is amazed by something, it is said that they’ve eaten a shock 吃惊 (chijing); if someone has suffered a loss, it’s said that they have eaten “loss”, so 吃亏 (chikui).

Let’s not forget the famous 吃她的豆腐 (chi ta de doufu), “eat his own tofu”, which means “flirt with her”. As you can see, the expressions tied to the verb 吃, “to eat”, are numerous.

Another expression I’d like to share is the following: 饕餮大餐 (taotie da can), “a sumptuous meal for the king” (literally, a large banquet for Taotie, the fifth son of the Emperor Drago).

The dawn of Chinese cuisine

The first archeological traces of people using fire to cook were found in China. It is thought that during the Zhou Dynasty (between the XII and III century A.D.), there were more than two thousand people employed to prepare food for the entire court. Chinese culinary culture, moreover, has influenced Japanese, Korean, Mongolian and Thai cuisine.

In the course of its extremely long history, China has suffered periods of terrible famine, and due to the bite of hunger they were forced to eat anything they could get their hands on: this is where the saying 饥不择食 (ji bu ze shi) comes from, “when you’re hungry, you don’t choose the food”.

Many dishes in modern Chinese cuisine still reflect the influence of that period; for this the Chinese never waste anything edible, a practice that at times is looked upon with a certain disgust by Westerners.

As is well known, the Chinese use 筷子(kuaizi), or chopsticks, to eat. In ancient times, the term for chopsticks was 箸 (zhu) but was replaced with 筷子 (in Japanese the term is still used 箸).

Have you ever wondered why the Chinese use chopsticks to eat? Probably yes, since not all Westerners are able to easily handle chopsticks.

Wouldn’t it be better to use silverware? Although the Chinese now use silverware at times, it’s unthinkable that they’d abandon using chopsticks.

First of all they have a long history. In times of famine, the Chinese usually shared food by using large bowls and thanks to the chopsticks, no one could be a glutton and take bigger portions than the others.

Chopsticks were also easily replaced, since all you had to do was break off a few twigs from a tree and it was done. Lastly, it is said that Confucius was a vegetarian and that knives reminded him of the slaughter of animals, so he preferred the use of chopsticks.

In China, eating is a convivial experience. Dishes are placed in the center of the table and shared with all those seated at the table. In the majority of restaurants, nobody will have their “own plate” but rather there will be large plates full of food and empty dishes where everyone can take what they like most.

Soups and bowls of rice

During meals, the Chinese love drinking soup. In fact, the word for soup is 汤 (tang), which is the same character for “hot water”. In China, rice has the same place that bread does in Italy. Usually, everything is ordered (meat, vegetables, mushrooms) and eaten together with rice.

One of the axioms of Chinese medicine is that any part of an animal’s body that can be eaten will help the corresponding part in our bodies. Here is where the expression 吃什么，补什么 (chi shenme, bu shenme) comes, or “what is eaten is what will be strengthened”.

For example, eating a fish’s eyes will help heal our vision; eating a duck’s tongue will make us into a speaker, and so on. Obviously, eating chicken wings won’t make you grow wings!

Given the aforementioned premise, now it will no longer seem strange that in Chinese to say “take your pills/medicine”, you literally say “eat the medicine/pills” and that’s 吃药 (chi yao).

The geography of Chinese cuisine

China is quite vast and contains some 56 ethnic groups. Considering the following axiom, it is taken for granted that Chinese cuisine changes a lot depending on the area in which it develops. On the basis of their geographic location, we can single out eight main aspects of the cuisine:

Developed in the province of 山东 (Shandong) it takes it’s name from the historic state of Lu (鲁国 Luguo). This type of cuisine is famous for the plethora of seafood that it uses (for example, abalone, shrimp, mollusks, etc). Although it’s one of the oldest cuisines in China, it’s hard to find 鲁菜 (lu cai) in the north of China.

This cooking style is perhaps the most famous, since it can be found in restaurants around the world. 川菜 is mostly famous for its spicy and/or peppery flavor, the very famous 辣 (la), “spicy”, and 麻 (ma), “peppery”, and the deadly combo 麻辣 (ma la), “peppery and spicy”. This cuisine is found in the large region of 四川 (Sichuan) and includes 300 different dishes, the most famous being 宫保鸡丁 (Gongbao Jiding) and 重庆小面 (Chongqing Xiaomian).

This cuisine originally comes from 广东 (Guangdong). The Chinese say that people from Guangdong (the Cantonese) will dare to eat anything. In fact, the Cantonese eat snakes, raw monkey brains and the like but they also eat the very popular 点心 (dianxin) which in Cantonese would be “dim sum”.

This was developed in the province of 江苏 (Jiangsu) and is famous for its seasonal products. A Chinese legend says that the imperial cook Yi Ya once came to Jiangsu to teach the locals how to cook. Perhaps the best known dish of 苏菜 (su cai) is 扬州炒饭 (Yangzhou chaofan) which is a variety of fried rice full of eggs, prosciutto, chicken, peas and sweet corn.

This is the cuisine of the province of 福建 (Fujian). Like 鲁菜 (lu cai), this cuisine also includes fresh fish, considering its vicinity to the sea. There are hundreds of different types of fish, mollusks and turtles. 闽菜 (min cai) soups are exquisite. The most famous is the thick soup 羹 (geng).

This type of cuisine comes from 安徽 (Anhui), the province surrounding the Yellow Mountains. It’s very similar to the cuisine in Jiangsu, 苏菜 (su cai), but with less emphasis on seafood. This cuisine is rich in a variety of local herbs, fresh bamboo and mushrooms.

It has its origins in the province of 浙江 (Zhejiang), and is famous for its delicate flavor and mellow aromas. 龙井虾仁 (longjing xiaren), or Longjing shrimp is the most representative dish of this region in my opinion. They are little shrimp in Longjing tea leaves, perhaps the most famous tea in China that grows in the fields around Western Lake, 西湖 (Xihu), in the capital of Zhejiang, 杭州 (Hangzhou).

This form of cooking comes from the province of 湖南 (Hunan), and is famous for its very spicy flavor. If you think that this is even more spicy than Sichuan-style, you’re ridiculous! There’s even a very famous phrase that goes: 江西人不怕辣，四川人辣不怕，湖南人怕不辣 (Jiangxi ren bu pa la, Sichuan ren la bu pa, Hunan ren pa bu la) which roughly translates to “people from Jiangxi and Sichuan aren’t afraid of spicy; those from Hunan are afraid it isn’t spicy enough”.

Small taverns, pubs and open grills aren’t lacking in China and you can find them at all hours and in every place, even in the most unthinkable ones! I’ll give a brief overview of the most common dishes you can find on the streets:

烧烤 (shaokao), or roasted meat on the grill, highly preferred by Westerns returning from the disco.

饼 (bing), or cakes, pies and pancakes. These sweets can be fried or baked.

水饺 (shuijiao), the famous Chinese ravioli! You’ll find them with meat and vegetables.

The Chinese love hot water (which should be good for the body) and drink tea all day long; let’s not forget the famous “Tea Classic”, 茶经, written by the Chinese, 陆羽, Lu Yu (733-804 A.D.).

Thanks to globalization, the Chinese – mainly the young ones – usually drink the same things we do, such as 可口可乐 (kekou kele), or Coca Cola, 芬达 (fenda), or Fanta, and so forth.

A typical Chinese beverage is the well-known 奶茶 (naicha), a mix of different teas and milk. It’s a drink that I love to drink frozen. Fantastic!

Hoping to have whet your appetite, all I have to say is 吃饭了 (chifan le) “let’s eat!”