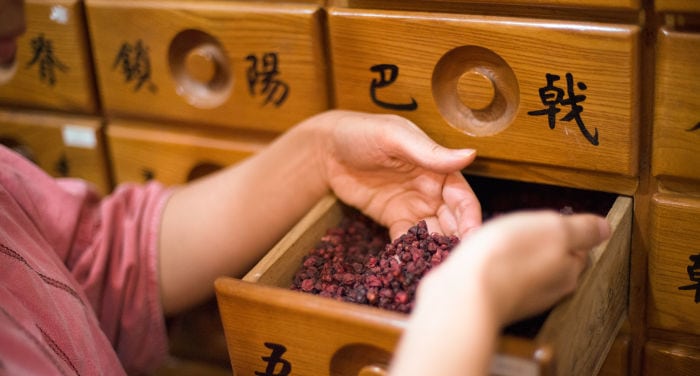 Today’s article was written by Fátima Denis, an Argentine nutritionist and founder of the webpage Tipsnutritivos.com (Spanish) where she gives her advice on how to achieve a healthy lifestyle.

The origin of traditional Chinese medicine

It is estimated that Asian medicine started in China more than 5000 years ago. It is currently practiced around the world. Traditional Chinese medicine (TCM) is a tradition that has demonstrated its effectiveness over millenniums and the course of countless lives. At the beginning of this year, the World Health Organization even acknowledged its benefits and made the best of the opportunity to work alongside medical organizations that work under this tradition.

Chinese medicine is not so much popular customs; rather, it is a complete medical system that uses rules perceived in nature as a guide to understanding the disease and disequilibrium of the body.

The oldest known book on Chinese medicine is the Huangdi Neijing, also known as the The Emperor’s Inner Canon. Even though it dates back to the year 200 A.D., it is a compilation of medical ideas and techniques which are much older.

Currently, Chinese medicine has extended far beyond the techniques shared in the Huangdi Niejing, and many variants and innovations have appeared since then. However, some principles, such as the ideas of ying and yang, or the laws that the body obeys, remain unchanged. This is an incredible fact, considering the age of this medical system and its current relevance.

Oriental medicine puts a large amount of emphasis on diet and nutrition. However, beyond the well-known proverb you are what you eat, Oriental medicine claims that a balanced diet – on top of being necessary – is itself one of the pillars that sustains a healthy life.

“There are four basic principles to obtain and maintain good health” says Bob Flaws in The Tao of Healthy Eating. Bob is the author of more than a dozen books on Chinese medicine and is a renowned researcher in this field.“These principles are: diet exercise, rest and the adequate mindset”.

What is considered an unbalanced diet according to Chinese medicine is different from the equivalent idea in the West. Working alongside a Chinese medicine professional and a nutritionist, people can adapt their diets to incorporate a large amount of foods, flavors and herbs that will help them maintain optimum health. The Chinese diet system proposes to expand the food options as to cover all sources of nutrition available. Does that sound complicated? Don’t worry; I will try to explain concepts as I go along in this article.

Flavors and their relationship with the properties of foods:

A diet based on Chinese medicine should include a range of foods that include the five flavors:

Since antiquity, Chinese herbalists have classified medicinal materials depending on their taste. They understood that there was a relationship between the flavor of a certain herb or food and the effect it produces when consumed. This relationship plays a key role when it comes to determining the correct combination of herbs to treat certain problems.

Within this system, some herbs are considered gentle, which means that they are barely noted on the tongue when being consumed. However, the term “gentle” really doesn’t capture the original Chinese meaning, which implies that these herbs have a natural, virgin or pure flavor. At the same time, gentle flavors are sometimes considered a type of sweet flavor. However, while sweet herbs can contribute to the accumulation of humidity (liquids), gentle herbs tend to be diuretics, a property that “counteracts” humidity.

Continuing with the exploration of classification by flavors, there also exists another flavor that is considered to be an astringent but which is often referred to as a subcategory of the bitter flavor. Some materials, especially minerals and shells, can be astringents without a strong bitter flavor on the tongue, while bitter-flavored herbs can also have an astringent effect.

In some texts, astringent and gentle are added to the five basic flavors of herbs, making for seven categories.

It is reasonable to wonder whether flavors really do have a strong correlation with the effects of herbs. However, more and more Western research is endorsing the benefits reported in the application of traditional Chinese medicine.

The five flavors and their relationship with the organs

The theory of traditional Chinese medicine establishes relationships between the five flavors and the five most important organs in the tradition: the heart, the liver, the lungs, the kidneys and the spleen. Each organ is supposedly related to a certain flavor, in such a way that foods with that flavor can restore the health of that organ.

As I mentioned before, this means that when you eat some food, through its flavor, you can guess what organ it will have the biggest effect on.

According to the Huangdi Neijing, organs try to reach an equilibrium themselves through your diet. When a sick organ is not working correctly, it will tell the body how to get healthy by producing cravings for a certain taste.

How does our body reach an equilibrium through flavors?

The liver and sour foods

Traditional Chinese medicine has, in addition to the association between organs and flavors, concepts different from the Western concepts on the relationship between the organs and certain physical and mental functions. For example, the liver is considered to play an important role in emotions. When it is not working properly, the individual will experience a large amount of symptoms that will be expressed through emotions, keeping them angry and easily irritable. Among physical symptoms, headaches, nausea, high blood pressure and a red face and eyes are notable. The body may also experience insomnia, abdominal distension and constipation.

The spleen and sweet foods

The spleen is considered to be the most important organ in the digestive process. It is said to perform the functions of the transformation, absorption and transport of nutrients obtained from foods. If the spleen is weak or is not working like it should be, the body will present the following symptoms: a lack of energy or chronic fatigue, irregular intestinal movements, weight gain, swelling in the arms and legs, and poor sleep or even insomnia.

People with spleen problems often crave sweets because foods with a high sugar content provide a burst of energy that counteracts sleepiness and fatigue. Once the spleen problem is solved, the sweet cravings are supposed to disappear.

The kidneys and salty foods

Traditional Chinese medicine considers that the kidneys store the original essence of our body, and that this essence is inherited directly from our parents. For this reason, the kidneys are associated with the composition of the body, which can be weak or strong.

Some formulas and combinations of herbs, when they are prepared to treat the kidneys, are ingested with salt water so that the effects reach the kidneys first.

If the kidneys are weak, the body will present the following symptoms: back, knee or ankle pain, tired legs, poor memory, frequent urges to urinate (most of all at night), impotency, and in children, problems such as the late development of speech or the ability to walk. The foods most often used to treat the kidneys are: sea cucumbers, goji berries, pecans, chestnuts, oysters and beans.

The heart and bitter foods

Bitter foods are said to have the ability to eliminate body pain, in particular in the heart. When a person suffers from excess heat, the body will display symptoms such as ulcers inside the mouth, the reddening of the face, palpitations, anxiety and insomnia. Generally, urine is very dark or very yellow, and the tip of the tongue has a very red or bright color.

To treat these symptoms, Chinese medicine suggests to add bitter foods to your diet. They may include: grapefruit, mustard greens, bitter melon and green vegetables.

The lungs and acrid foods

In the Oriental tradition, the lungs are considered to be the body’s first line of defense. They are in charge of protecting the body from external pathogens that try to invade it. When the lungs are not working properly, the individual may experience the following symptoms: sneezing, nasal discharge, coughing, headaches, throat pain, the lack of sweating and cold sensations.

Acrid foods have an effect on the lungs, removing external pathogens and cold from the body. Because of this, traditional Chinese medicine considers that adding acrid ingredients to foods in the winter can help the immune system avoid colds and the flu. Onion, garlic, ginger and pepper are the products that are often used to this end.

Thanks to the information in this article, you now know the relationship between the different flavors of foods, their effect on our organs and which of them can be used to treat certain symptoms according to traditional Chinese medicine. Take note that this information is shared for solely educational purposes and should not be used to for self-treatment. If you want to get treatment through this medical system, you should start by consulting a certified traditional Chinese medicine practitioner.

If you are interested in learning more about the health benefits of green tea, click here to read our article on the subject.

In addition, if you want to learn more about this ancient medical tradition, I suggest the following bibliography: