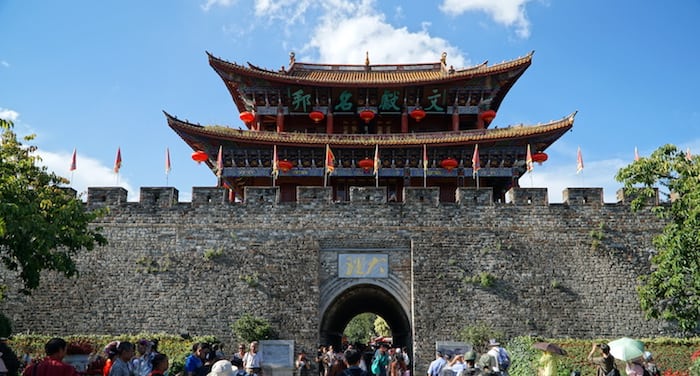 This is to clarify my position as a tourist, which varies diametrically between fascination and disgust; and to make clear that in these areas it’s best to go as soon as possible since, when it comes to authenticity, there’s a relentless march that pushes Yunnan to lose something precious every day. The only alternative is to personally promote culturally responsible tourism.

When to go to Dali

Dali, though located at an altitude of 1,900 meters, still doesn’t record the freezing cold of the most northern parts of Yunnan. The climate is generally mild and very sunny. It’s a pleasure to visit the city during the shoulder seasons, as much as it is as a summer destination considering that the thermometer hardly reaches 30°.

Rather, the same recommendations for Kunming apply: the sun beats down because of the altitude, so it’s good to “apply cream” as needed during the day and keep in mind the temperature change between the early morning and night. 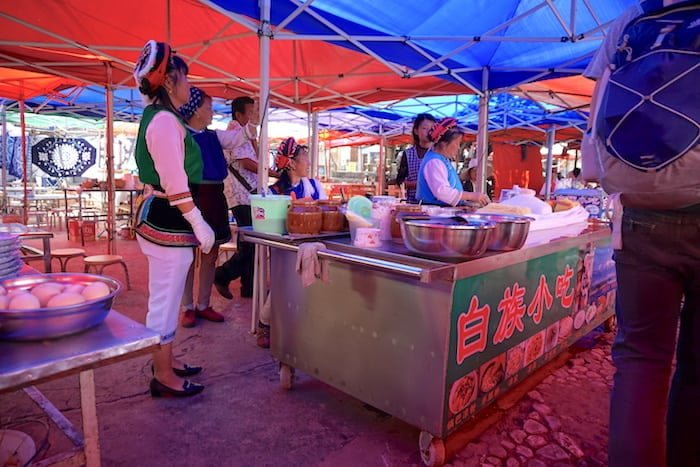 At the Dali market, they sell snacks typical of the ethnic Bai – Photo by Fabio Andreetti

How to get to and how to get around Dali

Usually Dali is one of the stops that you make on itineraries going to Lijiang or Shanghri-la: so being on the way toward the north, it often ends up being a base of operations for quick excursions to ethnic minority villages or the Cangshan Mountains. Then, a race toward Lijiang and beyond.

As a result, in the old city, the small historic center is still preserved, you only need a half day to gallop between shops. But the finesse of what remains of the Bai rhythm and their buildings are best discovered by stopping a little longer and dodging the crowds.

Dali airport 大理机场) is not served by international flights. It has a small terminal where only domestic flights come and go. So from other countries you’ll be forced to consider a stop at one of the bigger cities like Beijing, Shanghai, Nanjing or the closer Chengdu and Chongqing. In particular, there are tons of daily connections with Kunming, which saves several hours of travel by road or train, since the flight lasts less than an hour.

The downside of the airport is that it is on the exact opposite side of the lake and the old city. To get there, it takes at least an hour by car in normal traffic conditions. There’s a shuttle bus that goes as far as Xiaguan Station (a.k.a. Dali New Town), where you’ll have to change with Line 8 to get to the old city. By public transportation the whole price is about 20 Yuan. A taxi directly from the airport to the old city costs about 80 Yuan, and it doesn’t make any stops ;-)

Dali can also be reached by long distance buses from Kunming, Lijiang and Shanghri-la. Some services travel by night, especially for the route to and from the capital. The inconvenience is that the bus station isn’t close to the historic center, but in Xiaguan, a good 14 km to the south. There are various connections, but the real problem is that there’s practically only one road, so traffic builds up easily.

The rail option is limited to express trains; there are no high speed trains between the cities, which stops instead at Kunming. Between Kunming and Dali it still takes 6 to 8 hours of travel, while to Lijiang it’s a more bearable 2 hours.

When it comes to getting around the city: the center is so small that you won’t need anything more than yourlegs. Rather, other points of interest can respectively be reached: 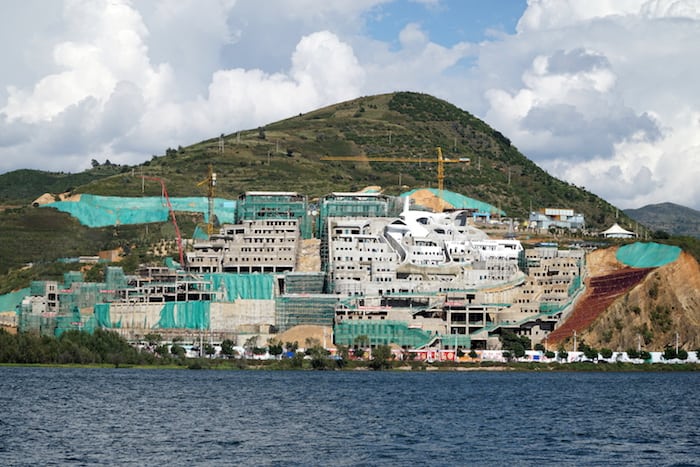 Where to stay in Dali

Since Dali New Town was developed to the south of Old Town and all around the lake, much of the lodging is located outside the old city, and many have affordable prices. They are mostly modern buildings in a good location, that is, facing Lake Erhai or towards the mountains. But it’s still not the same as staying in old Dali.

In fact, many of the hotels in Dali Old Town are inside of historic Bai buildings, with inner courtyards and finely renovated rooms and uniquely decorated doors. Personally, I stayed at the Fairyland Hotel Dali Zhong He Ju and it was a picturesque experience immersed in the general vibe of the city.

This is why, if your budget allows, try to avoid the easy solutions of Xiaguan and spend a little more time looking for the ideal place inside the historic city center (even one of the renovated Bai homes!).

Considering the size of the city, one corner is as good as another. The city itself is small and for getting around longer distances, taxis and public transportation are available.

Click here to read our reviews on the best hotels in Dali.

What to see in Dali 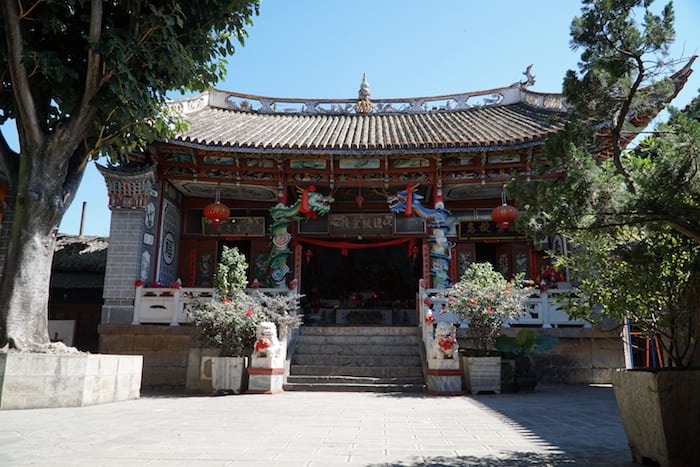 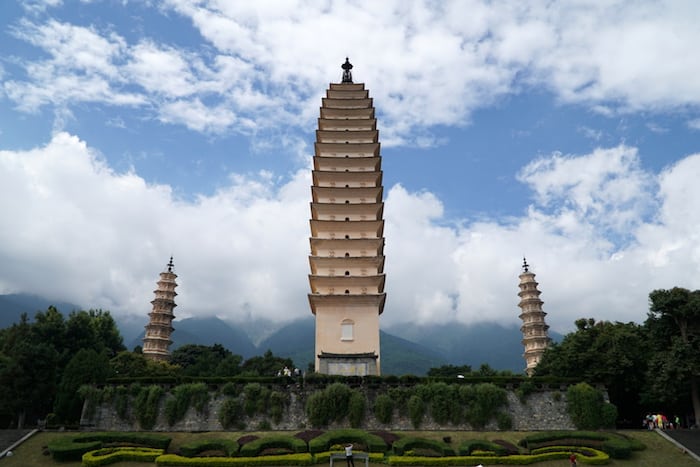 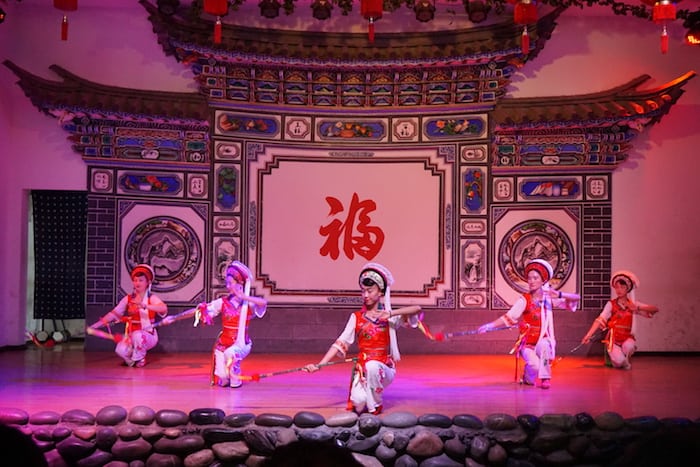 A demonstration of traditional Bai dances – Photo by Fabio Andreetti

The Bai have a long history that has its origins in these areas and is tied to the already mentioned Kingdom of Nanzhao. Yunnan is the region where they are most numerous, but are also present in Guizhou and Hunan.

They are distinguished locally because they wear finely decorated clothing with a preference for white (in fact Bai 白 in Chinese means white); single women braid their hair and wear head coverings with long cords that look like spaghetti, which they cut once they get married. The Bai are excellent dancers thanks to a long musical tradition, and are also known for the typical characteristics of their residential areas, which over time have developed into their own architectural style.

The use of marble and wood are widespread in these buildings: in fact the entire area of Dali if full of this hard stone, to the point where in Chinese, marble is translated into “Dali stone” not surprisingly, 大理石. The interior of homes include a garden and special wall, onto which according to tradition the sun’s light should be concentrated. Observing the decorations of the entrance doors, you can guess if the head of the household is the woman just by noting if the highest decorated animal is a phoenix.

As able fishermen, the Bai offer a special suanla yu (酸辣鱼) even if the majority of their dishes are prepared with pork or chicken meat (as a mid-morning snack, you can have a piece of pork rind, how great…). At the market you’ll find pickles in abundance, and obviously lots of goat cheese! 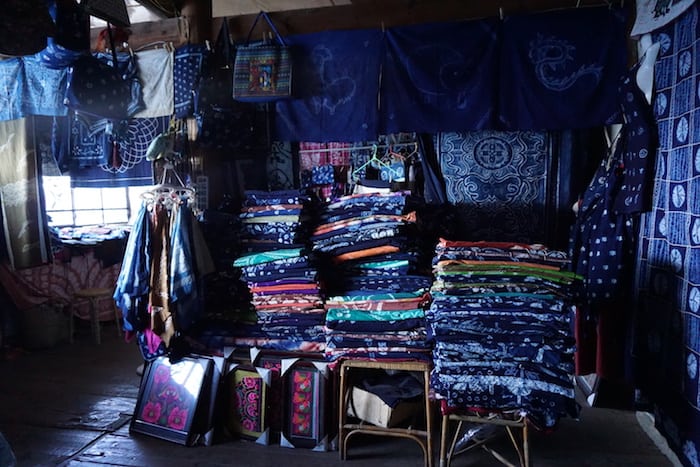 The area is full of marble quarries and silver mines, and for this reason handicrafts are still active in the old city. Rather, you need to be careful to stay away from “trash”.

These go from massive silver trinkets that you buy by weight, such as bracelets as large as a bone or often as handcuffs. However, in the finer stores, you can also find minutely worked rings and even thermoses with embellished finishes (considering how they’re used in China, a silver flask is an imperial gift).

Next to this, locally made tie-dye textiles are exquisite. The majority use the natural blue of indigo; the color doesn’t fade with washing if it is first prepared by soaking it in a salt bath for a few hours.

Certain works, rigorously handmade, are so painstaking as to require months: to give an example, to design different circles, they include grains of rice one by one before adding color. And then, once the textile has been treated, the same grains of rice are taken out of the material one by one. And voilà, a work of Amenuensis, which are obviously paid for such.

I can recommend “Happy Embroidery di Yu Ling Li”, a nice girl that tenaciously carries on the family tradition. Her shop (namely her house) is at Xizhou, 26, Rangyi alley (大理喜洲镇染衣巷26号), [email protected] 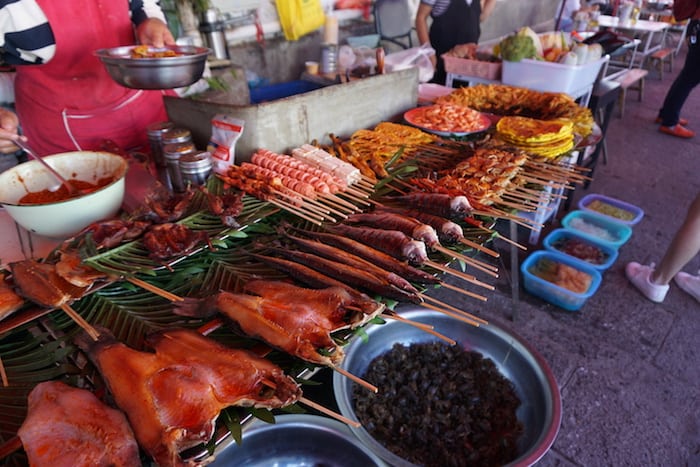 Personally, I find the local cuisine among the most tasty in all of China. And this is because the more you go up into the mountains of Yunnan, the more widespread are the mushrooms! The smell of home…

But the mushrooms aren’t the only specialty. Prune alcohol has a really long history: it is prepared in fat skin bottles, with various gradations and enriched by various scents. It is sublime when used for cooking, especially when making pork and prunes.

A typical restaurant both in style and architecture is Meizijing Jiujia (梅子井酒家), which prepares the prune liquor in house and offers lots of dishes full of local products.

As a last recommendation: if you arrive in the evening and stay on the most popular roads without allowing an early morning walk in Dali or go off the beaten paths, all that will remain for your eyes and ears are crowds of people. Or worse yet the locals’ loud music.

So, don’t stop at the first impression, but earnestly search for the Dali hidden by the violence of tourism. It’s still an esquisite place.

Do you have any doubts? Leave a comment here below!