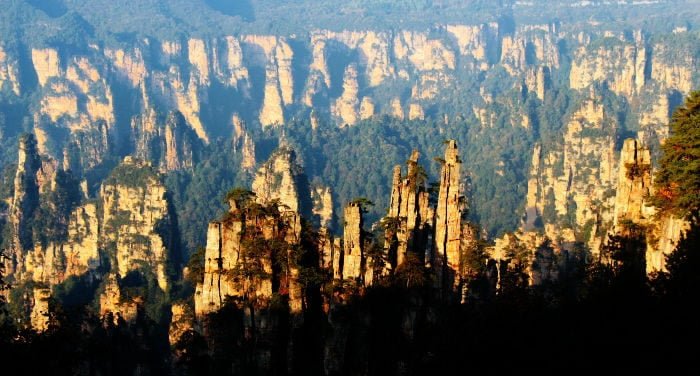 China is much more than just big cities, temples, and noodles. In the center of China, in the Hunan province, are the Zhangjiajie-Wulingyuan mountains, which have lately started to be known as “the Avatar mountains,” as locals strongly believe that Cameron was inspired by these landscapes to create the floating rocks of Pandora. The truth is, when the sandstone columns are covered by fog, their tops look like they are floating.

The Wulingyuan Mountains (located in the municipality of Zhangjiajie) make up one of the most impressive national parks in China, the main attraction of which are the large karstic columns that seem to defy gravity, as in many cases, they look thicker at the top than at their base. The big problem with this area is the lack of practical information there and the poor quality of maps, which don’t give much help when it comes to getting an idea of how to get around the area. Because of this, and as I have visited it twice, I would like to explain a bit how to plan a visit.

How to get there and where to stay

Over the past years, tourism in the area has developed to a large extent, which has led to an increase in the means of getting to Zhangjiajie: there is a train station, an airport, and the essential bus station which offers the strangest routes. 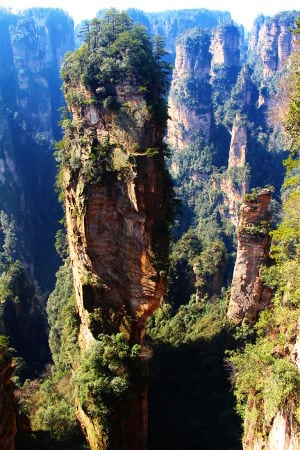 The first time I got to the area via a long train trip (26 hours from Beijing). While there is an airport with a lot of good connections that may save a lot of time, sometimes spending time in a Chinese-class train can be a real experience.

The biggest “challenge” is how to get to the park. It has multiple main entrances. The southern entrance is around 40 kilometers away by highway from the city of Zhangjiajie, and can be reached by bus or taxi. Nonetheless, by accident – or rather, by “mistake,” – I booked a hotel in the town of Wulingyuan, which I had never heard of.

This town just happens to contain one of the main entrances to the park, because of which this mistake turned into a good idea that I recommend to everybody that asks: the best place to stay is in the town of Wulingyuan, which you can get to by bus (around 40 minutes) or taxi from Zhangjiajie. Once you are in the town, you can’t miss the entrance to the park.

A third option is to stay in the park, in a hostel located in the Wulingyuan area of the park, although friends that have stayed there don’t recommend it, as it is quite (too?) basic.

We have written a complete article with reviews of some of the best hotels in the area for any type of budget. Click here to view the hotels that we suggest in Zhangjiajie.

Planning a trip to Zhangjiajie, as you can see from this article, may be complicated, as despite being quite a popular place, the lack of information on the area can be a problem for some travelers.

If you have the time and motivation to organize a trip, there is no need to go on a tour, as with the information available, you can visit the area without any problem (especially if you speak Chinese), although it is advisable that you don’t rush things too much, as it is normal for the unexpected to come up at these latitudes.

However, if you have limited time and don’t want to deal with the possible (probable) unexpected events that may arise, going on a tour may be a good alternative.

If you are interested in a tour, you can contact us by clicking here and we will put you in contact with an agency specialized in these types of tours in China. 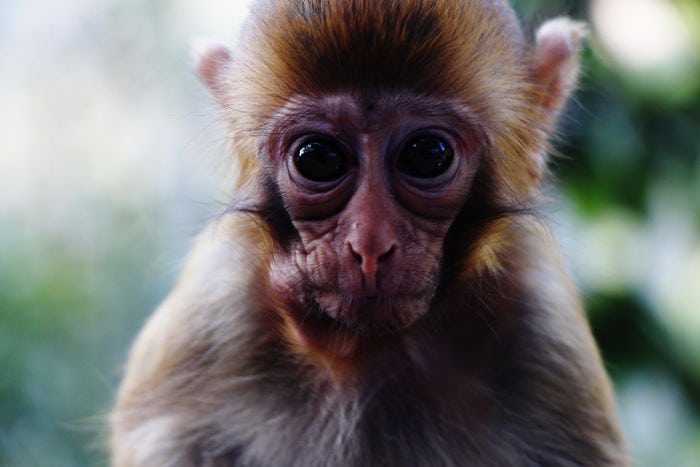 Zhangjiajie is really big, and the trip has to be well-planned before the visit. To best organize the trip to the park, I have divided it into to three main parts: Wulingyuan, the Golden Whip Stream, and Huangshi. Wulingyuan and Huangshi are located at around 300 meters above the river that flows between the two of them.

Wulingyuan itself is divided into three large areas:

The Golden Whip Stream – sorry, it wasn’t me who named it – in addition to being a hike with almost no steps, lets you see the large basalt columns from their base, a point of view which makes them seem even more impressive. In some areas, you have the feeling that you are walking in a large city with stone skyscrapers.

Last of all, Huangshi Mountain is another necessary place to visit. You can go up by cable car (if it is not broken), or on foot (I had to go on foot; take water if you choose this option). Once you are at the top, a circular path gives you a panoramic view of some of the main basalt formations in the park.

In addition to all of these landscapes, you can’t miss the monkeys. They are quite friendly, move around the park in groups, and it’s not rare to see them around the river or on one of the peaks. 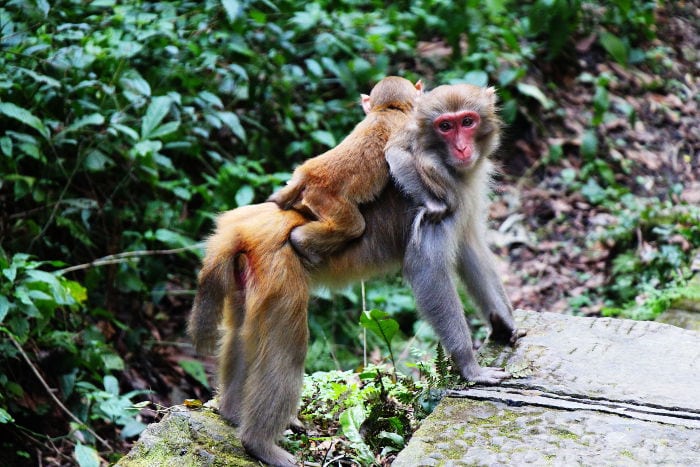 Now that I have explained the main features of the park (there are many more), here are three different potential visit plans:

If you only have two days to visit the park and you don’t want to wear yourself out too much, it is possible, although I suggest you wake up at the crack of dawn.

Two-day plan (all out)

If the previous tour gives you the feeling that you won’t see enough, but you still only have two days, you can try the following route:

If you have the luck of having three days like me the first time I visited Zhangjiajie, you can relax a little more.

In addition to what I have mentioned, there are many secondary trails that may be added if you want to visit more places or if time permits. 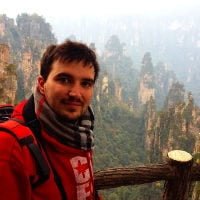 Author Bio: Ignacio García arrived in Beijing in 2012 as a student, and from the beginning has not ceased to explore this magnificent country. his trips have led him to discover the hidden treasures in China known by very few people. He currently works doing what he likes best, namely, planning trips that provide complete experiences in the country.
Photo Credits: Photos by Ignacio García