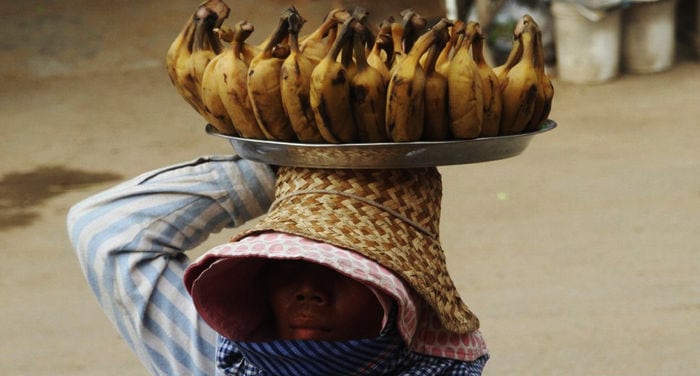 Even today you can visit the caves where the Lao population had secretly lived for almost a decade to protect themselves from American attacks.


As is explained in the town museum, there are still millions of undetonated American mines that continue to mutilate the poor local population that makes a living by cultivating fields.

According to research done by a British organization seeking to defuse the mines in Laos, the British Mines Advisory Group, each year more than 300 people are killed or crippled due to antipersonnel mines, and from 1964 to today more than 50,000 Lao have lost their lives.

Phonsavan can be translated as “Paradise Hill”, probably for the fact that the city is located 1,100 meters above sea level. Being in the mountainous region of Laos, the average temperature in Spring-summer is 23 degrees, the winter instead is much lower compared to the rest of Southeast Asia: 15 degrees.

However with a tropical climate, Phonsavan is pleasant to visit from November to March, when the average number of rainy days is about 3-4 a month.

Despite being rather extensive, my advice is to stay in Phonsavan for two, three days maximum. Unlike other Lao cities, such as Luang Prabang for example, Phonsavan isn’t a city with lots to see, besides the jars and craters left from American bombs.

If you love nature and peace, your visit can change into a week-long stay. In this case the best option is to rent a motorbike and wander through the nearby villages where you can come into full contact with nature and the customs of the local people.

How to get to Phonsavan

The most convenient Lao city for getting to Phonsavan is Luang Prabang. The distance between them is 120 kilometers, and every day there’s the option of taking a local bus headed for Phonsavan, and vice versa.

Besides the bus there are also minivans that connect the two cities. Personally I preferred taking the local bus because it has more convenient departure times compared to the minivans, which makes the trip just once a day and is rather dangerous and uncomfortable.

You can get a bus ticket in any tourist agency in Luang Prabang. The cost starts at 15 USD a person, and also includes the price of a tuk-tuk that will take you to your hotel and bring you to the bus station.

Once you get to the station the rule that whoever gets there first will have the best spot factors in: tickets aren’t numbered and often buses will carry so many people that the last ones on will have no place to sit. Since it is a 7 hour trip on a mountain road, it’s not the most pleasant of circumstances.

Vientiane and Phonsavan are distant around 350 kilometers. The only bus that covers this distance is a night bus that offers beds. The trip lasts 10 hours and the ticket costs 20 USD a person. Unfortunately, in Laos the roads are terrible, at times unpaved. The fact that the country is covered by mountains doesn’t help!

The fastest way of getting to Phonsavan from the capital is by air. From Vientiane;s airport there are four weekly flights that cover the Vientiane-Phonsavan route, all on Lao Airlines.

Obviously the price is higher than the bus; for a one-way flight you’ll spend at least 100 USD.

There are no direct flights from Bangkok or any other Thai city. There are many alternatives; your choice will depend on your budget and the time you have available:

From nearby Vietnam, Phonsavan can only be reached from the city of Vinh. The only route is by land; in fact there’s no Vietnamese or Lao airline that serves this route.

Buses from Vinh take 12 hours; there’s only one a day, which leaves at 6:00 in the morning. The number of hours can rise depending on the time it takes the people traveling with you to get through the immigration office at the border with Laos.

The border between Laos and Vietnam is about an hour from Phonsavan, so you’ll arrive at the immigration office at night. Once you get to customs, the bus stops and you’ll have to walk through the “no-man’s land” between the countries on foot.

I recommend that you move quickly: get off the bus with all your bags since they’ll be checked on both sides. have your passport ready, where they’ll stamp your visa and look for your bus right away, which in theory will be waiting for you on the other side of the border, though with Vietnamese drivers and their habits (especially when dealing with foreigners) you never know!

The cost of a ticket is between 15 and 20 USD a person, depending if you buy it in an agency in the city, in a hotel, or directly at the bus station.

What to do in Phonsavan

The main attraction in Phonsavan is the Plain of Jars, a territory that includes some one hundred archeological sites, located mostly in the region of Phonsavan.

The mystery of the jars is still unsolved; from what we can tell these enormous jars (which can surpass a height of three meters) served as tombs for the medieval population. The town legend says that they were containers for a rice-based alcoholic beverage, made by giants that lived in the region during 500 B.C.

The existence of the jars is almost miraculous: during the Vietnam War the number of mines dropped by American airplanes reached 300 million, and many landed right in the area where the jars are located. Despite the quick intervention of several international organizations, today the number of unexploded mines on Lao soil is 80 million.

You can find organized tours that will bring you to see the three archeological sites that have jars in every hotel and agency in the city. Prices vary depending on the itinerary and whether or not you have a guide.

In the price of a guided tour (which are around 30-40 USD a person) the entrance fee is included (about 2 USD per archeological site) along with lunch. If instead you prefer to go on your own, renting a taxi to bring you to the various areas, then the price goes down to 15-20 USD, negotiable.

As was mentioned before, there are three areas that have jars:

Despite the area’s rehabilitation, it is important that you don’t go off of the marked paths, since there are still many unexploded mines.

Another interesting place is located on a hill a few kilometers west of Phonsavan. You’ll see an enormous green field where cows and goats graze freely. In the middle there are enormous craters caused by American bombs during the so-called Secret War, fought at the same time as the Vietnam War, since the government of Laos sided against Washington on the side of the Vietcong.

Besides these archeological sites, another interesting place to visit is Mulberries Organic Silk Farm, a factory run by non-profit organizations with the purpose of growing mulberry trees to then make silk clothing, produced to care for the body, infused with herbs, to support the local economy and create work for the women of the village.

Where to stay in Phonsavan

The number of hotels in the city are just more than twenty. The majority are guest houses that offer double rooms for prices starting at 15 USD. They’re all rather old and due to the altitude, are also rather humid and cold. I therefore recommend that you bring warm clothing, even for going out at night, when temperatures go down below 10 degrees.

Where to eat in Phonsavan

Even when it comes to restaurants the choice is rather limited (some ten in all). The few clubs that there are, are all concentrated on the main road of the city. A place with good food – both local and international, – is Bamboozle Restaurant. You should absolutely not miss the handcrafted goat cheese from one of the factories in Phonsavan!