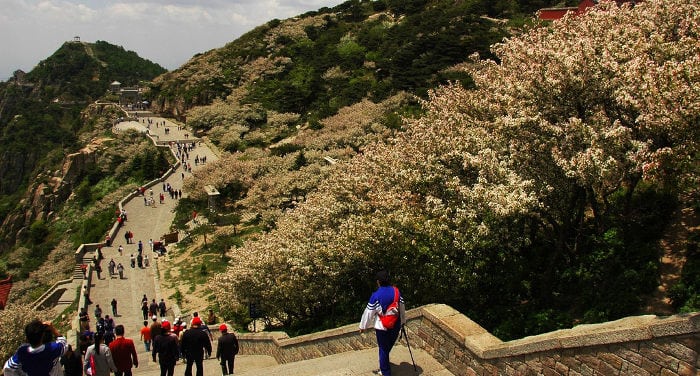 Declared a World Heritage Site in 1987,Mount Tai occupies an area of 426 square kilometers and reaches a height of 1500 meters, located in the Southern province of Shandong (山东), which actually means to the east of the mountain. Not far from Jinan (济南), the region’s capital, Tai Shan’s peaks rise above the city of Tai’an (泰安).

Tai Shan can boast thousands of years of history. The first traces of human beings goes back to the paleolithic period, and during the period of pre-imperial dynasties the mountain was already an important destination as the place where one would go to offer sacrifices to the gods.

Actually during the Qin Dynasty the mountain acquired even more importance. 221 B.C. is an important date in Chinese history, when the Qin Dynasty took full control of China and the imperial epoch began. Legend has it that the Dynasty’s first emperor, historically known as Qin Shi Huangdi, decided on the peak of Tai Shan to declare his vast empire and the unification of the country, and from that moment all the most famous celebrities that have marked and still mark Chinese history, have climbed Mount Tai.

These famous people have left a mark of their visit on the mountain, and during the climb you can see inscriptions in Chinese characters that make Tai Shan an open air museum of calligraphic art. Besides these beautiful masterpieces of Chinese calligraphic art, a visit to the mountain will be enriched by numerous Taoist and Buddhist temples that the visitor will come across before reaching the peak. 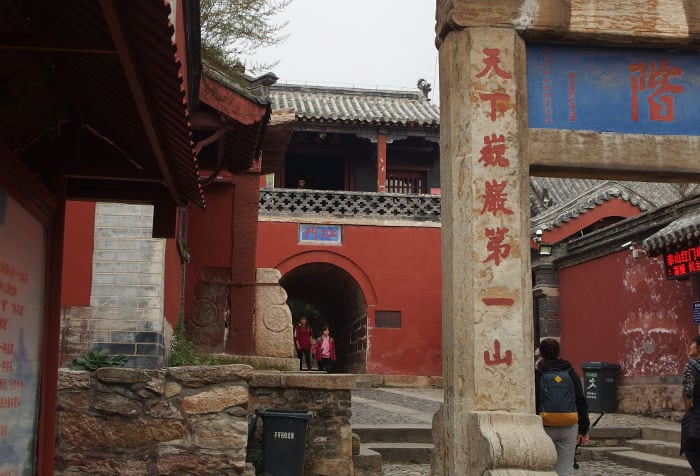 How to get to Tai Shan

The start of the path and ticket counter is found near the Red Gate (红门), not far from the center of Tai’an; just go a little over a kilometer down Hongmen Road (红门路), or take bus number 3 which will leave you near the gate.

You can get to the charming city of Tai’an by means of one of the two stations: 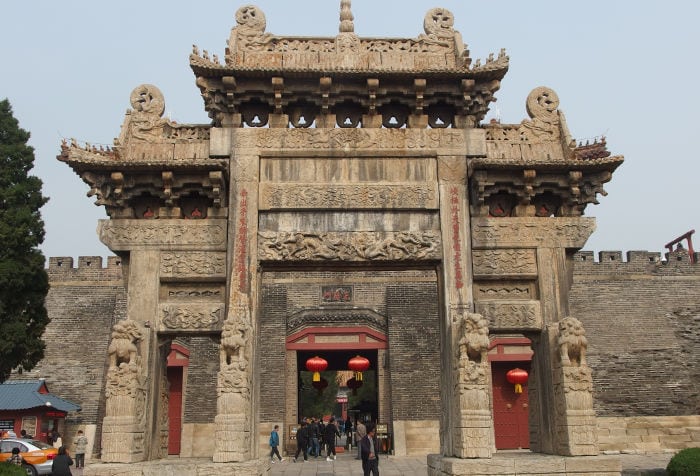 The South Gate, one of the entrances to the Daimiao Temple.

The pilgrimage to Mount Tai

Getting to the top of Mount Tai is certainly no easy stroll. In fact, it takes 5-6 hours, and an infinite number of stairs before getting to the highest peak. For those who wanting to reach the peak without too much effort you can choose the western trail (西路), equipped with a paved road traveled by buses (a trip costs 30 Yuan) that will bring you halfway up the trail, where you can then take a chairlift to reach the peak (the chairlift costs 100 Yuan).

So to reach the peak you have to prepare for an expense of 130 Yuan, adding 127 for the cost of an entrance ticket to the park (the elderly, kids and students – holding student cards – pay a reduced price of 62 Yuan).

Fans of trekking will take the central trail (中路), which starts at the Hongmen red gate, even if a true pilgrimage to Mount Tai starts near the Taoist Daimiao Temple (岱庙).

Daimiao is an imposing Taoist temple that goes back to the Song Dynasty (960-1127), even if its been found that some buildings onsite go back to a millennium before. The temple is dedicated to the lord of Tai Shan, and for this it was a good omen that pilgrims began their pilgrimage by visiting the temple and asking the help from the gods of the mountain.

Enter from the south fate, the Zhengyang gate (正阳门), where there’s a ticket counter (30 Yuan, reduced to 15 Yuan). In front of the temple there’s a park with a large supermarket, you’ll see a large sign ‘双龙超市’. I recommend that visitors bring a supply of snacks and water, along the road you’ll find small stands that sell food and drink but for triple the price.

Visiting the temple you’ll leave from the north gate, Houzaimen (候载门), here’s where Hongmen Road (红门路) starts, and by walking for a kilometer and a half you’ll get to the red gate. Once through you’ll begin a path immersed in nature.

This first route is easy and pleasant enough, there aren’t a lot of stairs and the trail is quite wooded, you’ll come across various temples such as the temple of the immortals (万仙楼), the Doumu Palace is dedicated to the lord of Tai Shan (斗母宫), and the Hutian Pavilion (壶天阁). 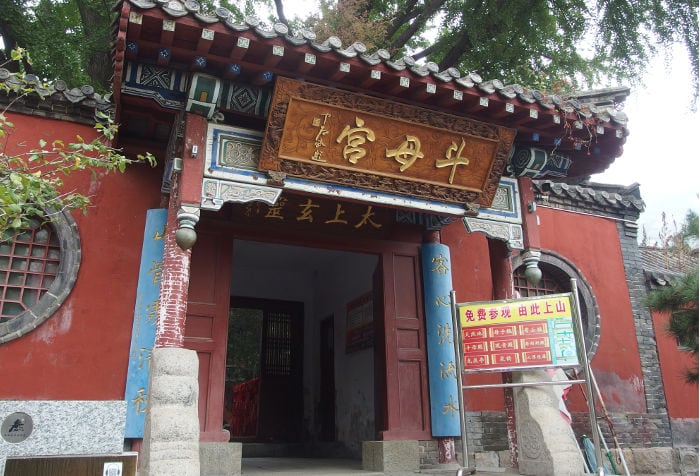 The Doumu Palace dedicated to the lord of Taishan.

A little past the Butian Bridge（步天桥）and after about two hours and a half of walking from the red gate you’ll get to the Halfway to Heaven Gate (中天门). As the name says, the gate is halfway to reaching the top. Here you’ll find a comfortable place to rest and recharge your batteries for all the stairs that await you later, along with various little restaurants. I recommend you try the mantou （馒头）and sweet potatoes cooked on the coals which are substantial and reasonably priced.

From the Halfway to Heaven Gate the most fascinating and tiring path starts (I remember that from here the chairlifts leave for reaching the peak). In front of you will extend an infinite series of stairs, but a more evocative landscape and imposing masses going up where you will admire beautiful examples of Chinese calligraphy.

After about three hours of climbing you’re finally at the South Gate of Heaven (南天门)! Once through that gate, many don’t expect to find a little ‘built up area’ that’s so well organized. You’ll find everything: little restaurants, small hotels, souvenir and grocery stores, besides charming alleys in the middle of rocky walls.

For those deciding to being the pilgrimage to Tai Shan early in the morning, so as to get to the South Gate to Heaven after lunch, I recommend that you rest in the little squares at the top before continuing the walk to reach the peak of the Jade Emperor (玉皇顶), which is the highest peak at 1500 meters (reachable from the South Gate to Heaven in a half hour’s walk).

Those who have begun their pilgrimage more calmly, planning to spend a night sleeping at the top, I recommend that you eat and rest, leaving the peak of the Jade Emperor for the following morning to experience one of the most inspiring sunrise that could possibly be seen in China. 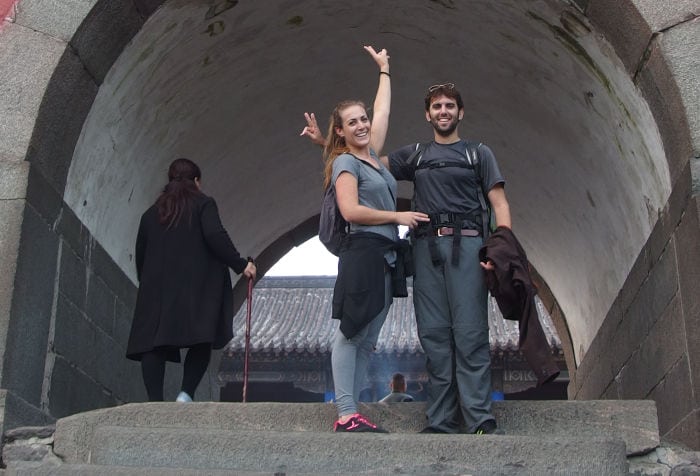 The South Gate to Heaven.

If you hear the hotel’s alarm go off at five in the morning, and you see people running toward the highest peak there’s a reason for it: seeing the sunrise from Tai shan is a rare spectacle, which is worth the cost of an entrance ticket. Near the South Gate to Heaven there are a few scenic points for watching the sun rise, but with a half hour’s walk you’ll get to the peak of the Jade Emperor, the highest point of Mount Tai, and the best place to experience the sunrise.

It would be best to arrive a few dozen minutes before the rising of the sun, since the place becomes very crowded. Prepare yourself for those who will want you to take their picture with a Polaroid while they ‘grab’ the sun. Once you’ve calmly watched the sunrise, along the road that will take you to back to the South Gate to Heaven, pay attention to the Bridge of Immortals (仙人桥), a natural bridge formed by large masses stuck between two rocky walls and the Temple of Bixia (碧霞祠), dedicated to the lord of Mount Tai. 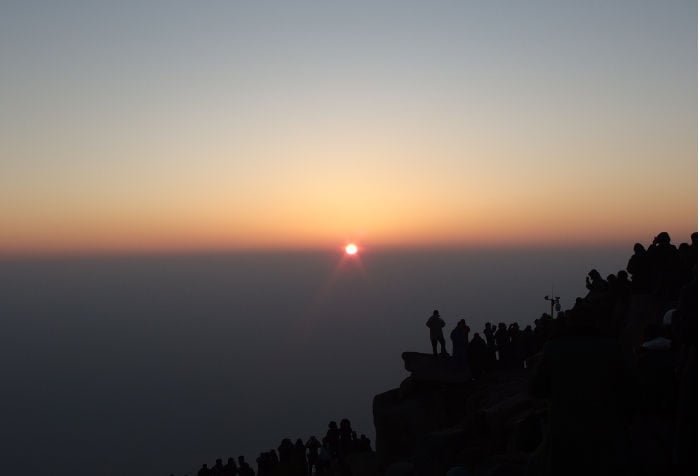 Sunrise from the Jade Emperor Peak.

The hotels and inns you’ll find during the climb are many, the first by the Halfway to Heaven Gate, but the majority of visitors who decide to spend a night on Mount Tai choose one of the hotels near the South Gate to Heaven. Here you’ll find various hotels but I recommend that you book in advance; the hotels don’t have a lot of rooms and some are only for Chinese citizens.

For those looking for comfort I recommend the Yunchao (云巢宾馆) hotel, while for those looking for just a bed to lay down in I recommend the hotel of the South gate to Heaven (南天门宾馆), where there are both private rooms and dorm rooms. Careful, the hotel doesn’t have heating or air conditioning and considering the temperature range, you’ll need to bring something heavy to wear so you don’t get too cold overnight.

Click here to check out the hotels available in Tai Shan 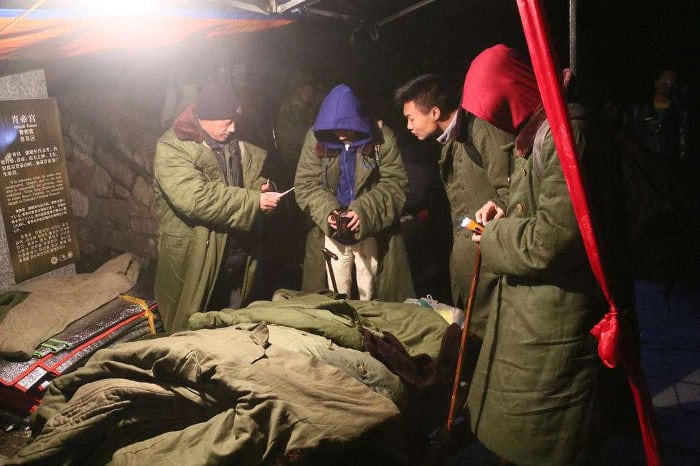 The stands where you can rent long green coats.

You can climb Tai Shan any time of year, but the best landscapes can be seen during autumn and Spring, when the weather is mild and pleasant. Those choosing to spend the night on the mountain should keep in mind that there’s a notable temperature range.

For those who don’t want to bring a heavy coat, I recommend that you rent one once you get to the top: in fact you’ll find various stands that have amassed some long, heavy green coats. To rent them for a night and return them the next morning you need to leave a deposit of 50 Yuan, while the coat costs 25 Yuan.

To get to the Halfway to Heaven Gate there are two routes, the central and western one, the latter being for buses and not great for those climbing on foot; there’s no path and the road is curvy and dangerous being traveled by buses. In addition the temples you’ll find along the western trail (the Bamboo Forest Temple and the Wuyi Temple) are in bad shape and are not maintained.