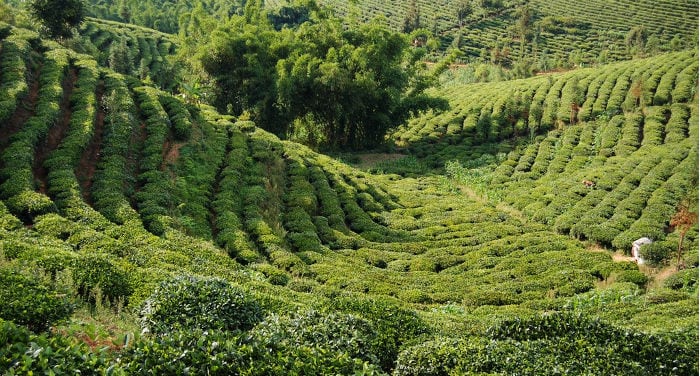 Green is probably the color that best suits this splendid region of southwestern China, land of ethnic minorities that live in the most diverse natural environments. In Yunnan you can pass from the southeast Asian heat to the snows of the Tibetan slopes, covering a territory crossed by numerous watercourses and rich heights.

In this corner of paradise Pu’er Prefecture is the even greener heart, the color of ecotourism and tea leaves, two elements that make this region of Yunnan absolutely worthy of being visited.

Pu’er is one of the most important areas in the world for the production of tea (particularly its namesake version) and for several years the Chinese authorities have been heavily sponsoring this aspect for tourism ends, so much so that in 2007 they changed the name of the prefecture itself, previously known as Simao.

Historically this is also the region where one of the branches of the Tea Horse Road, which from Yunnan and Sichuan brought tea to India and from there to the Red Sea. The prefecture, moreover, is inhabited by at least fourteen different ethnic groups (about 60% of the population).

Situated in the southeastern corner of the high plain that connects Yunnan to Guizhou, with improvements to the region’s road network, Pu’er Prefecture has become an important point of commercial road traffic on the road from Kunming, just a few hundred kilometers distant, heading toward southeast Asia, like Bangkok and then Singapore.

One of the characteristics that makes Pu’er even more interesting, even from a cultural point of view, is it’s vicinity to the border of three different countries: Burma, Vietnam and Laos, countries of which we’ve written about awhile ago.

The road to Bangkok

This is certainly the easiest and quickest way for visiting the Pu’er Prefecture. leaving from Kunming to reach Mojiang, which is crossed by the Tropic of Cancer and famous for its international festival of pairs of twins (1-2 May).

You can then move on to Ning’er (the actual starting point of the Tea Horse Road) and Simao, where you can visit the unmissable garden-exposition dedicated to tea plants, the numerous valleys consecrated to its cultivation and a beautiful national park. Finally you can head toward the south through the increasingly popular Jinghong (known by all as Banna), in the autonomous prefecture of Xishuangbanna.

With this route, once in Simao you can (visiting Banna or not) head toward Langcang, whose festivities recall members of the Lahu minority from around the world, beginning a triangular circuit that also touches Ximeng and Menglian.

Ximeng is inhabited by the Awa minority, one of the most mysterious ethnic groups in all of China whose Carnival is held in April, while Menglian hosts the Dai minority. In Menglian you’ll find the important town tower, the history museum and the ancient city of Nayun, not to mention the numerous waterfalls in the area. Lastly, from Menglian it would be possible to reach the Golden Triangle, but for now the road is closed to foreigners.

Toward Laos and Vietnam

This adventurous route also leaves from Kunming, so once in Mojiang – even without reaching Simao – you reach Jiancheng circled by three rivers and bordering both Laos and Vietnam, reachable by two different roads that are unfortunately still closed to international tourism.

Laos like Pu’er is an area of tea production, especially the Phongsali area, where you can admire splendid panoramas and reach Luang Prabang or other destinations in the country.

On the Vietnamese side, the closest international border post is found in Lai Chau, amidst the most beautiful mountain regions of Vietnam.

The peaks of Yunnan

This route goes beyond the Pu’er Prefecture since from Kunming it reaches the beautiful Dali to Jingdong, a true environmental paradise with its various natural reserves framed by the Wuliang Mountains and Ailao.

From Jingdong you can join up with the preceding circuits, also including Zhengyuan, where you can also find the oldest tea plantations in Yunnan (some are over two thousand years old!) and Jinguu, which hosts a Buddha highly venerated by the Dai and Yi who live in the region. Alternately you can also reach Simao from Kunming through Yuxi and Choushui, discovering a different Yunnan.

When to visit Pu’er Prefecture

Highly loved by Chinese tourists for its climate, Pu’er can be visited year-round even though Spring is when you can admire the tea plantations in their full glory. The prefecture’s climate is influenced by its altitude which varies between 317 to 3,370 meters above sea level, and is characterized by its mildness and the absence of strong winds while the average annual temperature hovers around 18 degrees. The rainiest month of the year is November.

All that remains is to wish you bon voyage on your trip to the green heart of Yunnan!

Pietro has many dreams and some hope. He loves to travel and see no future.