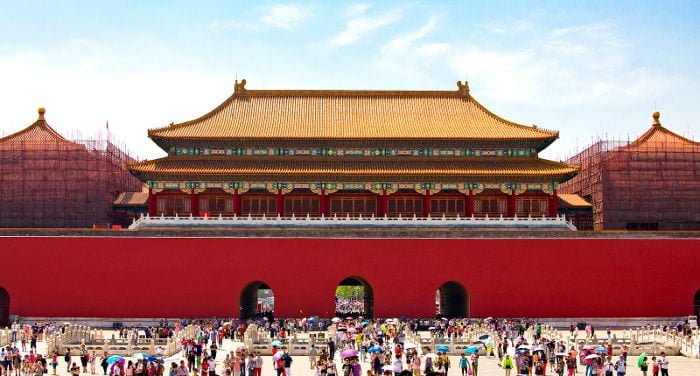 In both tradition and everyday life in China, each color has specific sensations and messages associated with it, as happens in every culture; at times there are rather “literal” and universal meanings, other times they’re exclusive to the charming and “strange” (for us) Chinese culture.

Three colors are particularly interesting: red, which could be considered the Chinese national color, and the pairing of black and white, which makes one of the most well-known symbols in Chinese cultures, the Dao.

What meaning do these (and other colors) have for the Chinese? We’ll try to understand it by means of the language – with proverbs and expressions as well as common and rarer more poetic uses.

Red, almost always written with the character 红 (hóng), and even rarely with 赤 (chì) and 朱 (zhū), is a color that’s particularly dear to the Chinese and is mainly tied to good things and holidays: for the rest of us, we too have our “red days” on the calendar… an expression born from the color that differentiates holidays from “normal” ones.

Returning to China, the Chinese flag is red, and red is the color that dominates all photos of the Chinese New Year, the Spring Holiday (春节, Chúnjié), where clothing, lanterns, decorations, dragons, streamers and so on sparkle: all to attract good luck.

Babies and Chinese kids (even older ones) anxiously await a gift in one of the famous red envelopes containing money 红包 (hóngbāo), literally meaning “red wrapping”.

Good luck can also be called 红运 (hóngyùn), “red luck”, and coming into a fortunate period of one’s life is then called 走红运 (zǒu hońgyùn) “walking in red luck”.

红火 (hónghuo) “red fire”, is an expression that means “thriving, prosperous, vital” – particularly when referring to business. The Chinese believe that it brings much good luck to start off on the right foot, and possibly, “in red”: a deal made on the first day of the year is called 红盘 (hońgpán) (“red dish”), and is considered an excellent omen for the entire year to come; for the rest, a commercial enterprise that starts well is said to open their doors in red, 开门红 (kāimén hóng). For us, a business that’s “in the red” is something to worry about.

A bonus for a business’ shareholders, or for a particularly productive employee is called 红利 (hońglì) “red profit”, while “dividing the red” 分红 (fēnhońg) really means “dividing the profits”.

满堂红 (mǎntánghońg) (full–hall–red), can have a double meaning: in a literal sense, it means “party decorations”, at a house or hall, particularly for a happy event; but, metaphorically it also means “to have success in everything that one does”, to have “red everywhere”.

A celebrity, or someone who is in the graces of someone that’s truly powerful, could be called a 红人 (hońgrén), “red person”, while for an extremely popular person there’s the phrase 红得发紫 (hóng de fāzǐ): “so red as to turn purple”, so famous that red is no longer enough to describe them.

In Chinese tradition, red is also the color of marriage. In ancient arranged weddings, a matchmaker had a fundamental role 红娘 (hóngniáng), the “red aunt” that cared for putting the families of the newlyweds in contact with one another; another Chinese tradition says that the destiny of the lovers is represented by a “red thread” 红线 (hóngxiàn).

Socialist and revolutionary tradition, which insists a lot on the symbolism and unifying value of this color, has used red as their flag and sign of recognition. A person loyal to the socialist cause has a “red heart” 红心 (hóngxīn), but when they become so “red” as to become an example for all, now you’re talking about a 红旗 (hóngqí) “socialist flag”, perhaps even distinguishing oneself in singing “red songs” 红色歌曲 (hóngsè gēqǔ), the revolutionary songs of Chinese socialism.

A natural reddening of the face gives the idea of beauty, youth and femininity: 面色红润 (miànsè hóngrùn) “the color of the red face is soft” is a typical phrase that indicates a rosy complexion in a healthy baby or young girl; 红颜 (hóngyán) “red color” indicates a “beautiful woman” while the accessories that she might wear could be called 红装 (hóngzhuāng), “red ornaments”.

To redden or become red however is also a physical reaction to various contrasting emotions: if it’s true that we redden when blushing, embarrassed or emotional, we also become red when our rage becomes so strong that it manifests itself in our face.

When a face turns red 红脸 (hóngliǎn), or even 脸红 (liǎnhóng), the Chinese also communicate the same emotions. One can become completely red in the face, 通红 (tōnghóng), if the emotion is truly strong; at times it is so strong that besides the face, even the ears can turn red, and in such a case you can use the expression 面红耳赤 (miànhóng’ěrchì). When furious, besides a red face the neck can also thicken, in which case you can use 脸红脖子粗 (liǎnhóng bózi cū).

Jealousy, which according to Shakespeare is “a green eyed monster”, in Chinese is called “the sickness of the red eyes”, 红眼病 (hóngyǎnbìng) – which however could also simply indicate conjunctivitis…

As in the West, red can also give the idea of danger: when a light turns red 红灯 (hóngdēng), likely there’s something in the engine that isn’t working or something is about to explode… lastly, “to turn on a red light” 亮红灯 (liàng hóngdēng) can mean “to prohibit” or “come to a critical situation”.

White 白 (bái) is universally considered the color of purity: 清白 (qīngbái), “clear white”, is actually the adjective “pure, clean”, but can also mean “innocent”. When doubled, 清清白白 (qīngqīngbáibái) means “to have clean hands”, or to be completely innocent.

White is also tied to the idea of simplicity, such as when one speaks of 白饭 (báifàn) “white rice, boiled without seasoning” or also 白话 (báihuà) “white word”, which indicates colloquial Chinese.

In China its also said that white 白 (bái) represents mourning, and in fact 白事 (báishì) a “white event”, indicates a funeral, and can be combined with red to collectively indicate weddings and funerals: 红白喜事 (hóngbái xǐshì). The bones of the dead are therefore called 白骨 (báigǔ), “white bones”.

Actually, the exact color of mourning is 素 (sù), which denotes the color of raw, untouched fabric (usually yellowish or fiber color), not pure, shining white; among other things it’s the same character that is used to indicate those who eat vegetarian food, 吃素 (chīsù).

White is also connected to the idea of no charge: 吃白饭 (chī báifàn), 吃白食 (chī báishí), 白吃 (báichī) are all expressions that mean “to eat free” (depending on the situation, it could also mean “to scrounge” …), 白食 (báishí) are food or drink gotten for free, 白送 (báisòng) means to give as a gift, and lastly, 白拿 (báiná) means to “take without paying” … also as in “to bum” in this sense.

White also seems to be, in a certain sense, the opposite of red: where red brings gain and profit, and white indicates loss, waste. 白白 (báibái) is often used as an adverb to indicate “in vain”. The character “white”, added to a verb, often denotes “in vain”: 白费 (báifèi), “to spend in white” (to waste), often the energies 白费力气 (báifèi lìqi) or 白费劲 (báifèijìn), or even 白忙 (báimáng) “to work in a vacuum”. A little like when we spend the night in white (without resting) or end up white… without bringing home “the result”.

The verb 明白 (míngbai) which means “to understand”, literally means “clear white”: another meaning of this color is, in fact, “understandable, clear”. For example, 表白 (biǎobái) can mean “to declare oneself” and, curiously, even the english verb has the idea of “clarity”, which goes more for colors than for situations.

Something that suddenly comes to light, like a revealed secret, is said to be 大白 (dàbái), literally “big white”, while what is for us “written in black and white” is indicated by the expression 白纸黑字 (báizhǐhēizì), “white papers and black characters”: unequivocal. Lastly, living a dream is called 白日梦 (báirìmèng), “a white sky dream”.

白头到老 (báitóudàolǎo) (“white hairs lead to old age”), 白头偕老 (báitóuxiélǎo) (“white hairs along with old age”) are two alternative versions of the same 成语 (chéngyǔ), a four character expression that means “to happily grow old together”, which is used when speaking about husbands and wives and wishing them a long life as a couple.

Traditionally, black (黑, hēi) is the color of darkness and death, but also honor, as seen in the facial makeup
of characters of great moral integrity in Chinese theater.

However in language, expressions that refer to crime, things that are illegal, badness, are more widespread: the mafia and other criminal organizations are called 黑社会 (hēishèhuì) “black societies”, which operate on the black market, 黑市 (hēishì), making dirty deals, “black”, 黑交易 (hēijiāoyì), and reinvesting dirty money 黑钱 (hēiqián), “black money”.

The criminals then speak a secret language, 黑话 (hēihuà) “black word”, have secret meetings, 黑会 (hēihuì), exchange illegal merchandise, 黑货 (hēihuò); once they were able to meet in “black inns” 黑店 (hēidiàn), where bandits gathered to celebrate their own wrongdoing.

All such wrongdoers walk along the “black road”, 黑道 (hēidào), the road of crime… and those who felt a “black heart” beat in their chest 黑心 (hēixīn) were free to join them, following the same “black road”, 走黑道 (zǒu hēidào).

There could be a “black hand” 黑手 (hēishǒu), which manipulates others from the shadows, dragging them into suspicious affairs or scandals 黑幕 (hēimù), or those who sully the reputation of others, “marking them in black” 抹黑 (mǒhēi), while those who are found guilty of something they haven’t done “carry a black bowl”, 背黑锅 (bēi hēiguō). Lastly, those who enjoy all this are using black humor, 黑色幽默 (hēisè yōumò) …

Other colors and curiosities

Yellow was the color of the mystical Yellow Emperor 黄帝 (Huángdì), the Yellow River 黄河 (Huáng Hé) and the yellow and fertile land 黄壤 (huángrǎng) around which the Chinese civilization was born. Even today there’s the common thought that the Chinese are “yellow” even though the majority of their complexions take on this coloring only when they tan (a reason why young girls in particular, make widespread use of umbrellas, masks and creams and hide from the sun almost as if they were vampires…).

The color yellow is also tied to another setting that is much less “noble”: “yellow” books and films 黄书 (huángshū) and 黄色电影 (huàngsè diànyǐng) are not like our crime shows, but correspond to those whom we would refer to chromatically as “red light”.

To conclude, one last color: 青色 (qīngsè) is a tone halfway between green and blue; to see a person with eyes of this color, 青眼 (qīngyǎn), means to treat them favorably.

If you’ve come this far, you’ve likely looked at my article with “blue-green” eyes, so there’s nothing else for me to say other than thanks and see you next time!

Aldo Terminiello (1989), has been writing and drawing since he was little and has done so for one year in Kunming, China where he finished his degrees in Chinese and English. The story of that year, transformed into a graphic novel, is being published on its website QinAode. He translates, illustrates and teaches English and Chinese depending on the case.