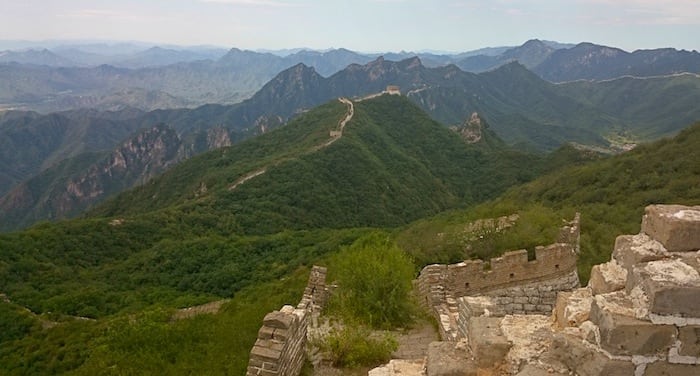 The panorama from Jiankou – Photo by Matteo Bosi

Of all the walkable parts of the Great Wall of China, Jiankou is among the wildest: in other words it means that this piece of the Wall has still been left to itself. Restorations are reserved for the more famous Badaling, Mutianyu and Juyongguan, not just for the walkway paved to a shine, but also for the services offered that have made the Wall halfway between an amusement park and walking mall.

Look, if you’re looking for parts of this mammoth construction where you can perceive a bit of the fascinating war history that surrounds it, Jiankou is what you want (together with Gubeikou).

But, be careful dear nostalgic one ready to dive into the past: as you’ve already guessed and have read the rest of the Great Wall guide, Jiankou is a piece of purity from the Imperial Ming epoch because it hasn’t been restored since the day of its birth, and hasn’t had any maintenance. The walls are dangerous and the route is hazardous, not to mention “officially closed to the public” (the quotation marks have been inserted because, just as in the best Chinese traditions, this prohibition is easily bypassed, rather, a source of business).

This is not at all suitable for those who suffer from vertigo or difficulty walking (though along the route I also saw poorly-equipped and unprepared tourists taking on the unexpected slopes that it offers). Moreover, I strongly discourage going under anything but perfect weather conditions: those same slopes can easily become full-blown sand-dunes, or worse, sledding slopes with a final dip(!).

Jiankou is the piece of wall that’s between the Mutianyu section (to the east) and Huang Hua (to the west). In fact, usually the most popular day walk starts halfway to Jiankou and ends in Mutianyu; but the overall distance between the two bastions from beginning to end is 20 km. 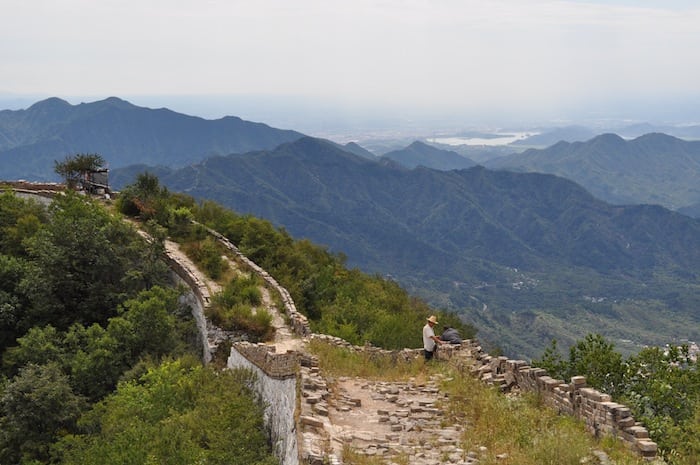 This segment of the Wall is 80 km from Beijing and not perfectly marked. It isn’t rare that those who adventure into this section rely on specialized guides for trekking on the Wall, such as for example “Walk the Great Wall.

Here you’ll find our advice for booking a hotel in Beijing.

How to get there and how much to spend

There is no direct bus to Jiankou. You usually get there from the village of Xizhazi (Xizhazi Cun, 西栅子村). From Beijing there are two buses that leave from the Dongzhimen Station (东直门), the 919 and the 936, which aren’t enough to get to the village. YOu have to get off at Huairou (怀柔) Fangshan and look for a local bus or van headed to Xizhazi. Or, you can get off at Yujiayuan and take bus H25 for the same destination. The prices for the bus, as usual, are rock-bottom.

Be careful for scams: there are many private drivers that will approach you or even get on the bus, posing as bus drivers in the attempt to attract clients before arriving at Huairou. You can choose to follow them, agreeing on a price or being irremovable and requiring the driver to only get off at Huairou to catch the connection for Xizhazi.

In reality, both these last changes can be substituted by taxi, which are easy to track down on the spot.

I won’t indicate here the bus timetable because it’s best to check with your own hotel for the departures from Beijing, and on the bus directly with the drivers the various routes and connections. The further you get outside the large cities the more the hours of public transport undergo a…greater flexibility that is hard to foresee, to the point that between the preparation of this guide and the first reading there could already be differences.

The pavement’s condition in Jiankou – Photo by Matteo Bosi

The village of Xizhazi has a fee but the section of the Wall is free. Considering the difficulty of managing local transport in China, I strongly recommend that if you’re not experienced, to hire a private car which can be arranged by your hotel or hostel; or through numerous local agents specializing in trekking the Great Wall.

The prices here vary: if you settle on just a car and driver, prices vary between 500 and 1000 Yuan depending on the model car. As far as guided visits go (Jiankou-Mutianyu), here to it depends on the company, but usually a basic package that includes transport (from the hotel), trip costs and telephone assistance but no guide (or just accompaniment to the entrance), goes for about 600 Yuan a day. The guides go for at least 500 Yuan a day. If the trek is for more than a day, then the prices go up to 800 Yuan a day. Consider these just starting points, that vary according to the participants and changes you want to make.

Personally, I followed the advice from the Wild Great Wall guides and Ricky Wong.

There are at least three places where its possible to start trekking at Jiankou. The entire crossing is pretty arduous because, as mentioned above, are about 20 km of ups and downs with obstacles like Chutes and Ladders and full of scenes from Indiana Jones of the poor. So, whoever decides to take on the whole length, it will usually take two days of trekking.

It is possible to leave from the first bastion on the section, the Nine Eye Tower and wind up near the beginning of Huang Hua, at Beijing Knot. It’s about a four hour walk is still considered a “safe” part of the wild section.

The central part, the part the goes from Beijing Knot passing by The Eagle Flies Facing Upward ( I didn’t translate the names, to be clear…) and Sky Ladder, is decidedly the most adrenaline-inducing part, with points that are absolute suicide. The “Sky ladder” not surprisingly gets up to a 80% slope. 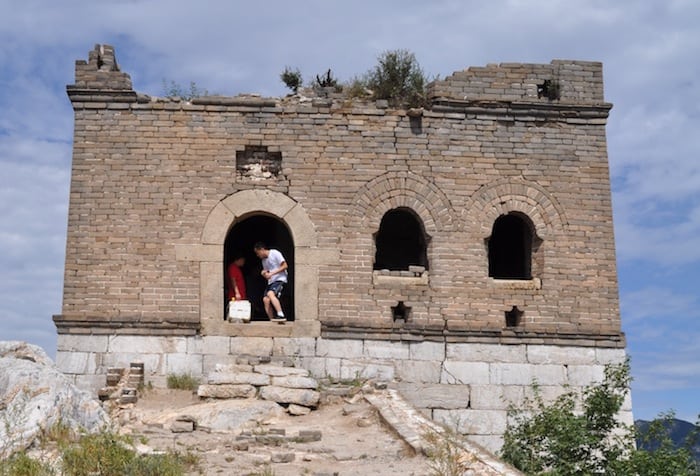 The last section, which is most popular, starts from Zhengbei tower and reaches the Mutianyu section, passing a peak of about 1000 meters (Ox Horn) and various thrilling peaks and valleys. It is not possible to run this trail in less than two and a half hours, taking into account breaks along the way.

To get to the Zhengbei tower I went with a guide (even locals hire him) who escorted us up the slopes because there are paths but they aren’t marked; only this path for reaching the Zhengbei tower from the valley took us an hour through the woods, with notable slopes.

I’m no expert climber – not even a mediocre Sunday walker, and I suffer from dizziness in a controlled way. In this sort of starting condition, I can say that Jiankou was a wonderful contact experience with a China that is still pure and un-commercialized. This was an experience that was smashed upon arrival at Mutianyu, which instead has been victimized by the tourism machine: just to be clear, we descended into the valley by sled (80 Yuan), which certainly wasn’t wanted by the Ming Dynasty to evacuate the troops…

At the same time, I admit that the journey to Mutianyu made the second part of the trip much more relaxed, in fact, this last section is decidedly less tiresome and stressful on a mental and physical level. 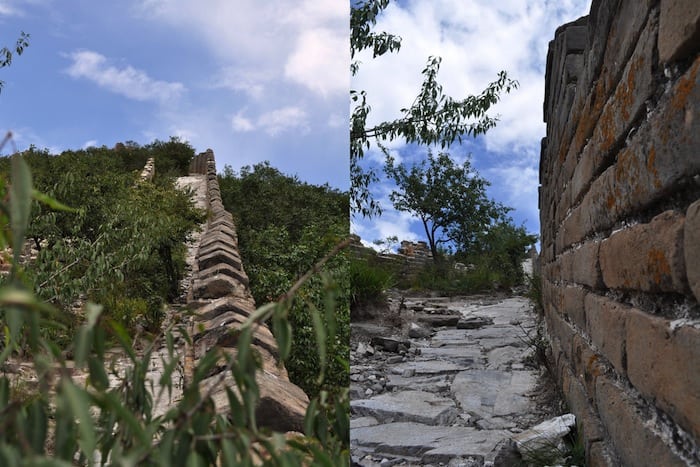 Detail of the slopes – Photo by Diego Ferrari

Nevertheless, Jiankou is an ideal place to take photos and imagine armies drawing close on nearby mountains. Visibility varies and isn’t necessarily tied to the weather conditions of Beijing, also because some points are high enough to hope to peer beyond the mist.

However I won’t tire of repeating that it is not an adventure for those who are not able, a little reckless and ready to really work at some points.

Once you are physically on the course of the wall, there aren’t huge problems getting oriented because there’s only one road an walking in the same direction you’ll mathematically reach Mutianyu or Huang Hua, which are better equipped and connected (at the worst you’ll err toward…).

But to reach one of the access points, specifically one of the bastion gates, is the hardest part. Don’t venture a trip if you don’t speak Chinese or are not in the company of Chinese or someone who’s already done it. Or still, if you don’t have a local who can escort you to the entrance.

From the bottom of the valley, it’s usually about an hour’s walk, if not double, just to reach the starting point for Jiankou and, again, the paths aren’t marked because this stretch of the wall isn’t officially accessible. Don’t be afraid, I was there and am here to write about it; instead just be aware of what it takes.

Things not to forget 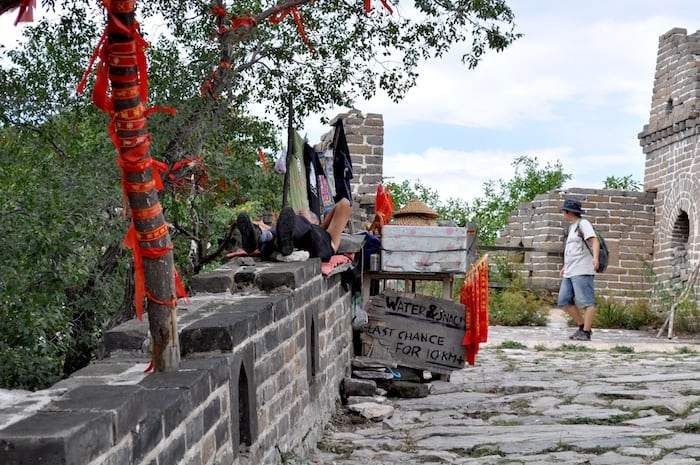 Access to Jiankou is evident at the end…of civilization! – Photo by Diego Ferrari

The stretch of the Wall at Jiankou is not serviced like Badaling. So you’ll need to go equipped with enough provisions and water for trekking, and eventually a GPS with an App in case you get lost. You’ll need shoes appropriate for trekking, so smooth-soled tennis shoes are not a smart choice.

As I said above, be careful of weather conditions because the pavement can easily get slippery; on the contrary, in summer the sun beats directly and you’ll find a little relief only at the bastions. Sunblock and a hat will save you from sunstroke!

Lastly, on a strictly personal note, if you can, don’t limit yourself to pictures with your smartphone because at Jiankou you’ll have lots of surprises.

Have a great trip and happy trekking!