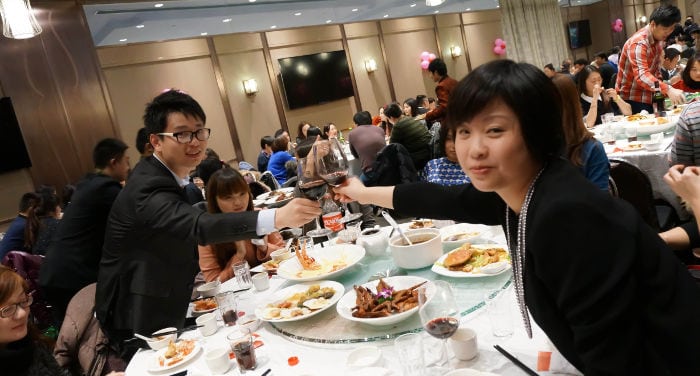 Today I want to give you a news bombshell: living in China means you’ll have to learn to interact with the Chinese.

Well yeah, I know that it might seem to be a given, but you need to know HOW to deal with the Chinese, especially when you have to spend much time with them as office colleagues.

Stepping back in time, at the end of 2012 I’m working in Beijing for an Italian-American company and I’m the only foreigner in the five branches of the north (Beijing, Tianjin, Shenyang, Dalian and Qingdao).

Relationships with colleagues is always a bit difficult, especially when working for the sales department, since the Chinese see everyone as a competitor that could potentially rob them of a client so everyone is out for themselves without involving anybody else.

You also need to keep in mind that the majority of Chinese workers are only interested in their paycheck and are more than willing to drop everything and change companies even for only another 200 Yuan a month, so it’s even more difficult to have a good relationship with your colleagues because these change frequently. Not to mention the fact that it’s extremely hard to find people who are capable and qualified.

When I arrived – young and inexperienced, the sales manager took me on a tour of the office to introduce me to all, one by one, but that was practically all I said to any colleague for almost two months.

Keep in mind that greeting someone, much like thanking someone, is not considered absolutely necessary. All you have to say upon entering the office (but only if you really want to) is “zao” 早, while you can say “zou” 走 when you leave for the evening. It’s as easy as it seems.

Obviously I also tried to have some conversations and ask for some personal information but all my attempts accomplished nothing. That’s why after two months of zao and zou and the briefest of conversations strictly tied to work matters, I hadn’t had any other communication with my colleagues. 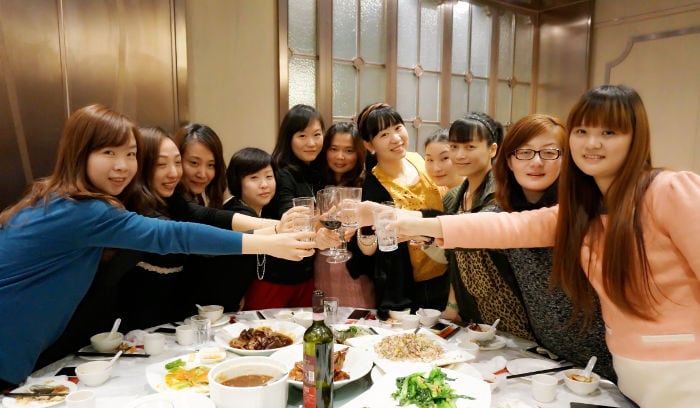 It wasn’t a particularly happy time, but the turning point took place during the Chinese New Year, when every office organizes the nianhui: an extensive dinner, accompanied by liters of baijiu and stupid games. To get friendly with your colleagues there is no better way to win them over than over a third glass of baijiu and by toasting them one by one. Obviously, being not only the only foreigner but the newest arrival, I found myself to be destroyed by the toasts, lost face in dozens of possible and imaginable ways and finally from that Monday on they began to speak to me.

Another way to establish contact with your Chinese colleagues is to invite them out to dinner or lunch. The majority of my colleagues wouldn’t accept a dinner invitation even if we knew each other for a long time, while inviting someone to lunch is sometimes easier, even if you have to go through the usual struggle of who is going to pay for the check. The important thing is that you don’t let the other person beat you to it.

Another fundamental point, each time that you travel you need to remember to buy a little snack typical of the destination to bring back with you. You can hand them out one by one to each of your colleagues or put them on a little table and have everyone help themselves.

As you can see, the secret is to “capture” them with food, even more so with something you prepared at home.

If you are a male and a smoker, you could always seize the opportunity on a break to speak a little. I recommend that you not only offer a cigarette to everyone there, but also light them after they’ve been accepted. In fact, in the life of the Chinese, everything is structured around ‘face’, which can also be translated as respect for others, which goes beyond such gestures such as WHERE to sit at the table and how to make a toast.

Lastly, complaints westerners have about their Chinese colleagues other than the fact that they cut their fingernails in the office, don’t say hello, sleep during the lunch break and much more, is that they’re unable to resolve problems on their own. Every little thing is abandoned in the hope that it will resolve itself or is sent up the chain of command until it gets to a boss that’s awake who will find the solution. Take note however, the bosses aren’t always awake.

Being the only westerner in office of Chinese isn’t too easy, but the secret to going forward without problems is to remember the Golden Rule “don’t try to change them; if you’re in their house, you’re the one who must change”.

Written by Jacopo Bettinelli – Student of Chinese since 2006 and always passionate about writing, travel and cultural exchange.