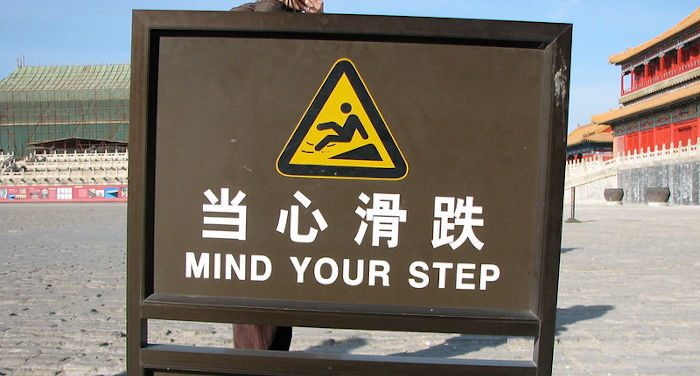 This article has the objective of describing the particular type of relationship that exists between the Chinese language and the everyday life of those who speak and read it.

From this close relationship, you can identify a series of “superstitions” (or customs) that are more or less strictly followed by the population of the Middle Kingdom.

In order to fully understand those relationships, we need to first consider some aspects of the Chinese language.

What are the characteristics and peculiarities of the Chinese language?

One always hears that Chinese is a strange language that is difficult to learn, especially for someone coming from a Western culture.

This is probably true in part, as every language in the world has its simple and complex aspects.

Among the simple, or relative so, aspects there is the spoken language: in the course of a few years with proper dedication and the right amount of effort, it is possible to understand and be understood by the Chinese.

This is because, despite the difficulty of the four tones of the Chinese language, after a period of listening every day to the aforementioned language and the required study, our heads will automatically react and allow us to understand well the various words and differences in tones.

The hard part is when it comes to writing. The Chinese written language is based on a series of “characters” (erroneously called ideograms) that permit written communication. A character corresponds to each word and by combining their new words are formed.

If in a European system (such as English or Italian) the relationship between the written and spoken language gives us an enormous advantage in learning it since after learning the syllables one can right away read all possible words; in Chinese, this isn’t possible because each character gives no indication on how to read it correctly.

Learning Chinese characters is mostly the result of memorizing and owning a dictionary.

In Chinese, this doesn’t happen: knowing how to pronounce a word doesn’t mean that you can write it and vice versa.

This strong division is however made up for in the fact that the Chinese language, both written and spoken, is very closely tied to everyday life.

This long premise will allow us to better understand the bonds that exist between these worlds.

Why is tone important in the Chinese language?

We’ve mentioned that there are four tones in the Chinese language. Every single character has one of these tones and at times a single character can have different pronunciations and therefore different tones. In addition Chinese is a syllabic language; each character is composed of only one syllable.

The fact that there are only four tones (in one syllabic language) actually creates a great redundancy of sounds.

There are therefore many characters that are written in different ways but are pronounced exactly the same.

Or there are characters that are written the same in pinyin (the system for identifying the sounds of Chinese characters using Latin letters) but have different tones (and are subsequently pronounced similarly but not identically).

For example, the previously mentioned “shi” (of any tone), also corresponds to the characters 时, 使, 十, 式, as well as many other characters.

There’s a famous anecdote of a foreigner speaking about his mother to a Chinese child who busts out laughing because instead of saying the word 妈 (mama), the foreigner said the word 马 (horse).

This redundancy is so dominant and evident that it is reflected in everyday life.

An easily observable case is tied to numerology.

It’s often said that the Chinese are a pragmatic people, yet give much importance to numbers, the place where they live, their mobile phone number, their wedding date, their license plate number, and so on.

This strange dichotomy (between pragmatism and superstition) traces back to their very complicated language.

Thanks to the redundancy of sounds, you can find favorably auspicious words that sound similar or equal to numbers or other words.

The best example is 4, which is written as 四 and pronounced “sì” (fourth tone), a number that is missing in many elevators and as a floor in many buildings since it is pronounced similarly to the word 死 (“sǐ ”, third tone, which means “to die”).

If in Western culture the numbers 13 and 17 bring bad luck since they are tied to superstitions or old stories, in China the number 4 is unlucky because it is pronounced similarly to a word with unfavorable connotations. And to see it every day when going to work or coming home is not looked upon favorably.

Another case is the number 8, which is written as 八 and pronounced as “bā” (first tone), but sounds similar to the word 发财 (pronounced “fā cái”, first and the second tone, a wish for wealth). For this reason both with telephone numbers and license plates, there’s a strong predilection for lots of number 8’s. License plates with 888 also cost more (rumor has it that it costs about ten thousand Euro for a 888 plate).

To overcome the problem of the number 4, many Chinese have circulated another way of looking at this number. It is pointed out that the fourth musical note is “fa”, a word that is the same as 发财, which is well looked upon.

Obviously, there are also numerous possible numerical combinations that bring to mind phrases with favorable connotations and meanings.

Another example is the number 521 (五二一, wu er yi) which sounds similar to the phrase 我爱你 (wo ai ni, I love you).

The number 518 (wo yao ba) also sounds very close to the phrase 我要发(财) (wo yao fa), indicating a wish for wealth and prosperity. In this case, the second pronunciation of the number one is used: yao (first tone).

The first time you go to a telephone center to get a new cell number there is always the possibility to choose a number based on the ones available.

This is because a hypothetical combination of the numbers 1 and 4 would be read as “yao si”, I want to die.

What happens in the written language?

Let’s move on to the written language. As was already said, each word is formed by one or more characters.

Characters are essentially a collection of lines put together in a certain order so that they acquire a given meaning. The Chinese start studying them from childhood and this study takes up a good part of their infancy.

Since there are so very many of them, it takes a lot of time and dedication to be able to learn them.

You also need to memorize Chinese characters and become confident with your sense of proportions and freehand design.

For this reason, in China calligraphy is considered an art, because it contains within itself a series of highly Oriental cultural themes such as discipline, rigor, order and proportion.

But how does the form of writing influence the lives of the Chinese and create superstitions?

Originally, Chinese characters (then called pictographs or ideograms ) were simply representations of objects or natural events. Over time they were modified a little at a time to their present configurations.

Some characters though still represent their meaning in a very direct way.

Take for example the character 火 (fire), which can easily be imagined as a little flame.

With an example, it’s easier to understand.

Let’s consider a Western designer who wanted to represent an outline of a man and his sense of security and protection.

They could, for example, create a stylized little man in the center of the page, and to express protection and security, draw a box around him (which could for example represent a house).

But if we look at him through Chinese characters, all the designer in question has done is draw the character 囚 (the character 人, person, substitutes the stylized little man).

The problem is, even if the poor designer didn’t know that in Mandarin that character means “prisoner”. So, if the designer were to be hired by the Chinese, he would be forced to change his design for “protection and security” since all the Chinese would see is a “prisoner”.

If you were to pay attention when touring China, you’ll note that there are practically no places (gardens, squares, fences) with only one tree inside. The number will be greater than or equal to two.

This is because a garden with only one tree inside would immediately call to mind the character 困, which is associated with a negative meaning.

For this reason, the designer must be careful when designing such a space in China, as their proposal will not be well-received by Chinese clients.

With these few examples, we have shown how certain superstitions, ways of doing and saying things are the result of the close relationship between the Chinese language and everyday life.

The important thing is remembering how these habits start solely from the language.

And this is one of the differences between the West and the Chinese: the close relationship between their life and their language.

Mind Your Step by Marie

Born in China but raised in Italy, after graduating in Architecture Luca decided to come back to his mother country to find his own way and identity. At the moment he lives and works in Shanghai as an architect. During his free time, he teaches Italian language to young Chinese people and writes short novels.