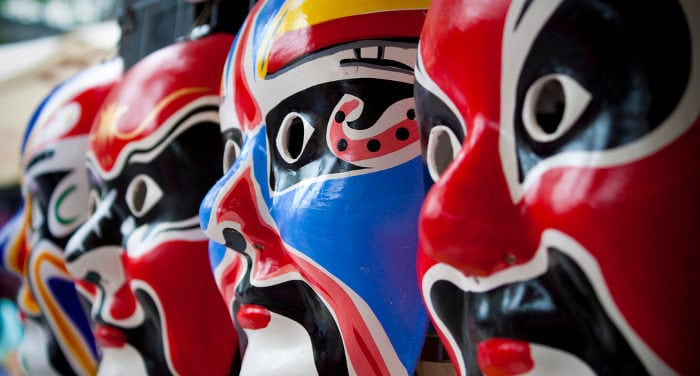 Boasting a continuous history of thousands of years, China has collected an extensive catalogue of rules – explicit and implicit – that govern social habits: the so-called Chinese etiquette (o 礼节).

In the past, almost every aspect of Chinese life was regulated by what Master Confucius called 礼 (“li”, rites); failure to observe one of these rites equated to a break in the Confucian code of ethics which, at times, could bring rather serious consequences.

With the advancement of globalization and modernization, the weight given to observing these ritual norms has diminished but is not completely lost. The loss of many of the traditional rites is corroborated by the fact that the Chinese do not expect foreigners to know them. For this reason, most times it’s enough just to be respectful and follow the Chinese saying ru xiang sui su (入乡随俗) or “follow the local customs”.

Most times, when you meet someone for the first time, the best thing to do is to behave formally and extremely humble, since humility is considered one of the greatest virtues. The traditional way of greeting someone consisted in a bow, keeping one’s hands hidden in the sleeves of their suit.

This method is known as 作揖 (zuoyi); by now this has fallen into disuse, substituted by a “more Western” handshake. In ancient times, the famous 叩头 (ketou) was preferred to the common bow, namely throwing yourself to the ground on your knees and lowering your head to the ground in a sign of deep reverence and great respect in front of one’s superiors.

Ketou (or kowtow), as a practice that brings to mind a feudal and archaic China, ended up in the most famous catalogue, fanwen rujie (繁文缛节), namely all the ritual practices and “culturally complicated” manners that were put aside in China’s long modernization process.

How to introduce yourself

As a general rule, the Chinese prefer to wait to be introduced by someone of their own group or counterpart. Self-representation is seen as inappropriate and uncivil. Almost everyone these days is aware of the use of visiting cards. This is given and/or received with both hands and a slight bow of the head as a sign of respect. Moreover, it is important to read the card attentively before carefully putting it into your pocket.

A most important aspect of Chinese manners is made up of social relationships, commonly known as guanxi (关系 ), that have existed in China from its earliest times. A more appropriate translation of this term would be “recommendations/connections”. The guanxi is a central aspect of life in China and anyone who refuses to play the guanxi game probably won’t have much hope of having success in China. I think it would be useful to list expressions about guanxi:

The guanxi are so important in China that there has recently been formed a branch of study specifically called guanxixie (关系学, that can be translated as “guanxilogy”) which has at its center the connections or social relationships that are so important to succeeding in China. This guanxilogy can be summed up in the following words:

The question of “face”: mianzi

Another aspect of Chinese etiquette is the question of “face”, mianzi (面子). “Face” is similar to the Western idea of reputation: a gauge to measure a person’s social status. “To have face”, you mianzi (有面子), means to be respected by your peers.

For Westerners it is difficult to understand why this is given such importance in China, where sadly “face” at times is more important than life itself. In China, one must always protect their “face” but also take care to save the “face” of others.

The “loss of face”, diu mianzi (丢面子) is one of the worst things that could happen to a Chinese person. To avoid this “loss” it is recommended that you don’t insult, yell at or criticize someone in public. Criticism – even if constructive – should be given in private in a very calm manner.

Chinese etiquette also covers communication, since conversing in China can be truly disorienting. The Chinese rarely say what they think in a direct way, preferring by far to circle around it.

The problem is that at times, this can be too long of a circle, making the conversation rather complicated. The Chinese consider a direct “no” to a request as being a source of embarrassment for all those involved. For this reason, they will seek to avoid too direct of a response at all costs, even choosing to remain silent.

In Chinese there are words for “yes” and “no”, shi (是) and bu (不) respectively, but they’re rarely used. For example, instead of giving a direct “no”, a Chinese person would prefer to say keneng you xie xiao wenti ( 可能有些小问题), or “maybe there’s a little problem”, or wo kaolu kaolu (我考虑考虑), or “I’ll think it over”.

Another peculiarity of Chinese etiquette has to do with the methods of communication. For the Chinese it is perfectly normal to answer their cell phone right in the middle of a conversation or meeting, or at the cinema. The Chinese use e-mail but still don’t have the habit of checking their messages daily; so it’s best not to expect an quick response to an email.

“When you are offered a gift it is because they wish to ask you a favor” (li xia yu ren, jiang you suo qiu, 礼下于人，将有所求 ). This proverb sums up well the custom of giving gifts in China.

Gifts – large and small, as cheap or expensive as they might be – are expected to be exchanged. When you’re invited to dinner or when you need to speak about official matters or business, you should bring a gift.

Gifts, traditionally, are not opened when they are received. The one who has received the gift will wait until the person who gave it to them has left. This is done in order to avoid any hypothetical embarrassment that might arise if the gift is not well received. Nevertheless, it might be that the one who brought the gift insists with a dakai kan yi xia (打开看一下) so that the receiver will open it.

Unfortunately in China you need to be very careful when giving a gift, and the selection should not by made by chance (suibian, 随便) because there is a plethora of gifts considered taboo. What makes these objects taboo? Believe it or not, simply their phonetics can make them in bad taste.

Watches, for example, are among the “bad omen” objects because the Chinese expression “give a watch”, or song zhong (送钟) sounds just like “participate in a funeral” (song zhong, 送终 ). Fans, or shan (扇) and umbrellas, san (伞) are phonetically close to “separate” (san, 散).

To learn more about giving gifts to the Chinese in a more business-oriented context, read here.

So what would be considered a good gift in China?

The Chinese very much appreciate local products and specialties from somewhere visited or your hometown (cookies, cigarettes, items of clothing) and love receiving fresh fruit. If you’re looking to curry favor with a powerful man, the best thing would be to give something to his wife (silk scarves or jewels, for example).

When you visit someone’s house (especially in the rural areas of China), something useful for the household would be ideal (cooking oil for example).

A word of caution! A gift will normally be refused a few times before being accepted. If you are refused more than three times, it would be better not to insist…

In short, the Chinese put a lot of importance on how words sound, for example they will never say “books” while playing cards since the word “books” is a homonym of “to lose”, and so on.

This subject was already discussed in a preceding article; click here to learn more.

The meaning of colors

To conclude, colors play an important role in Chinese culture and there are many superstitions and traditions surrounding them.

It would be a good idea to pay attention to colors when putting on your clothes. White represents death and is the traditional color worn to funerals; red is synonymous with wealth as well as the symbol of happiness; black represents the union of Yin and Yang and was historically considered the most important color; yellow was traditionally considered the most beautiful color, a symbol of the five legendary emperors. Now however, yellow is the color that is associated with pornography and is particularly “avoided”.