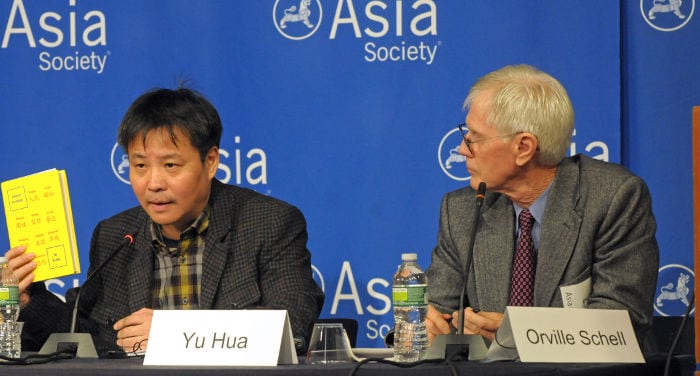 This is the first article of the new category “Readers of SDC: Guide to Chinese literature”, centered around the writer from Hangzhou, Yu Hua.

Yu Hua (余华) was born April 3, 1960 (one of Yu Hua’s works is entitled “What happened on April 3”, 四月三日事件) in Hangzhou, Zhejiang Province. At about one year of age, Yu Hua’s father left Hangzhou to become a surgeon in Haiyan. His father’s name is 华自治, his mother 余佩文 (Yu Hua takes his surname from his mother).

In 1977, after finishing high school, he was admitted into the “Lu Xun” institute of literature in Beijing, where he would get to know his wife, the poet 陈虹 (Chen Hong). Yu Hua lived in Beijing for more than ten years because his wife worked there; now he lives in Hangzhou. Before becoming a writer, Yu Hua worked as a dentist.

In 1973, the local library reopened and Yu Hua’s father, Hua Zizhi, bought his two children a library card that would allow them to read many works, especially long novels. Yu Hua read many of the works of Hao Ran (浩然), but his absolute favorites were: 《闪闪的红星》(Sparkling Red Star) and 《矿山风云》(“The Unrest in the Mines”). Nevertheless, he only got the first books of his own when he was 18 years old.

He began his career as a writer in 1983, at 23 years old, publishing small pieces: 第一宿舍 (The First Hostel), 鸽子，鸽子 (Pigeon, Pigeon), 疯孩子 (The Crazy Baby). In the 80’s, his works, along with those of Su Tong, Ge Fei, and Sun Ganlu would bring about a new literary current known in academic circles as “avant-garde literature”.

At 27 years old, in 1987, on Beijing Wenxue (Beijing Literature) the first piece that would make him famous was published: 十八岁出门远行 (shi ba sui chumen yuanxing) “On the Road at Eighteen”.

His writing during the Eighties reflects the influence of Kafka (hallucinatory views) and Yasunari Kawabata (attention to detail and cleanness of language). Thanks to Yasunari Kawabata, Yu Hua understood that the main purpose of literature and art is to show human feelings. In his first novels, Yu Hua seeks to portray the feelings of youth, the impulses and protagonist’s dreams, as well as a sort of naiveté, a candor and genuineness that didn’t exist in that period.

In 1986, Yu Hua’s works entered into a world filled with cruelty and violence that reflect the dark side within humankind. Yu Hua’s turning point is found in works like “Torture” and “A Type of Reality”. The first violent account Yu Hua claims to have written was 一九八六年 (1986), when he says he wrote about a man that burns his face, cuts his flesh, saws his bones, lets out long groans, but doesn’t understand if he feels pain.

In 1992, Yu Hua published an account that has the son of a landowner for a protagonist (Death of a Landowner); in 1993 he published the novel 活着 (Huozhe) “To Live” which would earn him big success thanks to the director Zhang Yimou who made a film of it that would be banned by the censors and would still have a landowner’s son as the protagonist. In 1998 in Italy, To Live won the Grinzane Cavour prize; in 2014, the same novel won the Acerbi prize. In 2002, Yu Hua won another literary prize, this time in Australia.

His most representative works

This first piece – taken from a news report – is the narration of a trip faraway from home on the part of the protagonist, a newly-turned eighteen year old, motivated by his father who wants him to experience the world. This work could be considered as a bildungsroman, a formation novel, because it has to do with the evolution of the protagonist toward maturity.

The work’s focus, though, is more than a young man’s education and the countless injustices that he undergoes during the course of events narrated. Metaphorically speaking, the trip the young man takes toward an ignoble end represents the trip that he makes from adolescence toward adulthood.

This medium length story tells about two friends, Liu Dongsheng and Chen Lei. The story is set in a village. I consider this story to be very important since there are many details that are found in one of Yu Hua’s most important works, Brothers.

This was Yu Hua’s first novel. This novel, which is autobiographical in nature, tells of the events of the young protagonist, Sun Guanglin, allowing us to witness his first experiences: discovering his sexuality, the joy and torments of friendship, loneliness and abandonment on the part of the adults, which joins and reunites the generation of older ones with that of the kids.

This novel tells about the affairs of Fugui, the son of a landowner. Fugui’s story revolves around a narrative arc of forty years and tells of how he survived the war, famines and Cultural Revolution. Despite all the misadventures that Fugui faced because of his particular disposition (he squandered all his assets on gambling), he resists life and in the end remains alone with his buffalo to reflect on his past.

Despite the very tragic nature of the events (the phrase “My dear older one, even if you die you still have to live” could be considered emblematic), Yu Hua underlines the piece’s optimism saying that the events can be read as “a person’s friendship with their own destiny”.

This novel, also translated as “Chronicle of a Blood Merchant”, tells about Xu Sanguan, a person who works in a silk factory. To cover the expenses of the women in his house (Xu Yulan, Happy One, Happy Two and Happy Three), Xu Sanguan turns to a very, very profitable practice that’s just as ruinous: he sells blood for ten times the price.

Xu Sanguan doesn’t only use the money from this practice to cover the expenses of his wife and three daughters, but also uses it to pay for lavish meals (good food is almost always present in Yu Hua’s work).

This novel (my favorite) tells the story of two half-brothers, Li Testapelata and Song Gang. Brothers is a beautiful tragi-comic novel: it goes from absolutely ridiculous and senseless events (death by asphyxiation from the feces of Li Testapelata’s father, a male’s chest transplant for a Miss Virgin competition) to heartbreaking events, which will have you crying as you read them (in this case it’s best to not give any spoilers!).

Song Gang and Li Testapelata lose their parents while young and find themselves facing the change in Chinese society, before, during and after the Cultural Revolution (a period in which people’s insanity knew no limits). Li Testapelata, a crude but smart young man, will become a successful man; Song Gang, the golden boy has a sensitive and generous character, and sadly succumbs to the misadventures that destiny puts in front of him. The most beautiful woman in Liuzhen (the village in which the story is set), Lin Hong comes between the two half brothers, which will set them against each other.

In 2010, Yu Hua published an extended version of the novel Brothers in Taiwan, a collection of essays that fill the empty spaces of the story. Yu Hua goes away from everyday life to describe China in recent years and does so starting with ten words: people, leader, reading, to write, Lu Xun, revolution, dying of hunger, knockoff, to pitch.

This novel unfolds over the course of seven days, telling of travels in the afterlife of a man who lived in present-day China and its contradictions of communism and hyper-capitalism. Yu Hua continues, and expands, his criticism of modern China with this novel. During these seven days, the protagonist, Yang Fei, meets loved ones who tell him of their misadventures in the hereafter: a cruel and oppressive society, a real hell.

The novel begins with the protagonist running late for his cremation, waiting for bus number 203 that never passes. Yang Fei notices the inequities that persist even in the hereafter, since VIPs have their own waiting area with very comfortable seats. Yu Hua seeks to transmit a very important lesson: only death can rectify inequality.