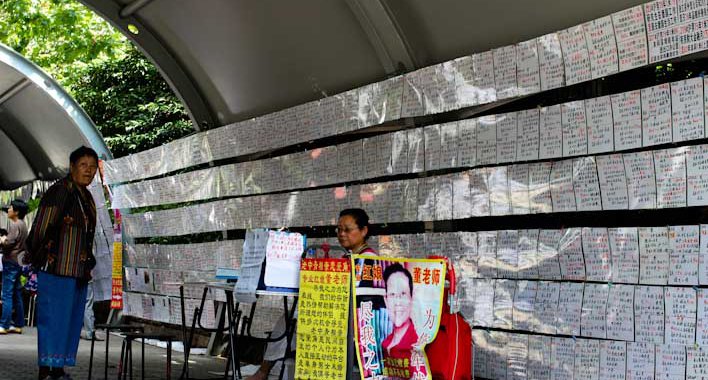 After publishing The Chinese Sex Symbol: What are Chinese women looking for? we received several messages of people claiming that if twenty years ago it was true that in China there was some pressure to get married as soon as possible, nowadays the situation has changed, especially in the big cities.

Even if I acknowledge that Chinese society has evolved tremendously in the last years (I’m not blind), the reality is that the pressure to get married is still there, even when it comes down to the so-called international metropolises such as Shanghai and Beijing.

But I’m not here to waste your time with my theories. Today I’ll only expose facts. If there wasn’t any pressure to get married, how the hell are you going to explain the photos that I’m sharing today?

Welcome to the “Singles Market” of People Square, Shanghai. The market opens every Saturday and Sunday and the easiest way to get there is to get off at People Square Subway Station (人民广场地铁站) and take the exit 9. You can reach the station through line 1, 2 or 8 of the Shanghai Subway. 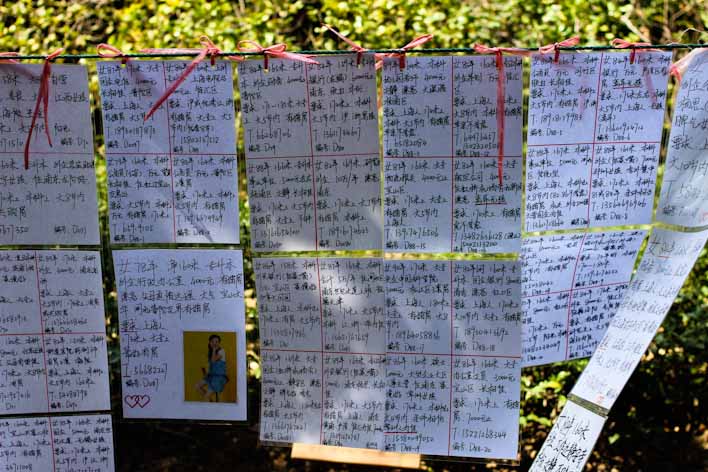 The Singles Market (yes, I made up the name by myself) it’s the weekly meeting point where Shanghainese people that have a son – or a daughter – that isn’t married yet gather for the only goal of recruiting a suitable partner.

Yup, instead of waiting forever for a marriage that may never arrive (or may arrive too late), the Shanghainese decided to take action and organize themselves to find a bride – or a groom – for their beloved child. 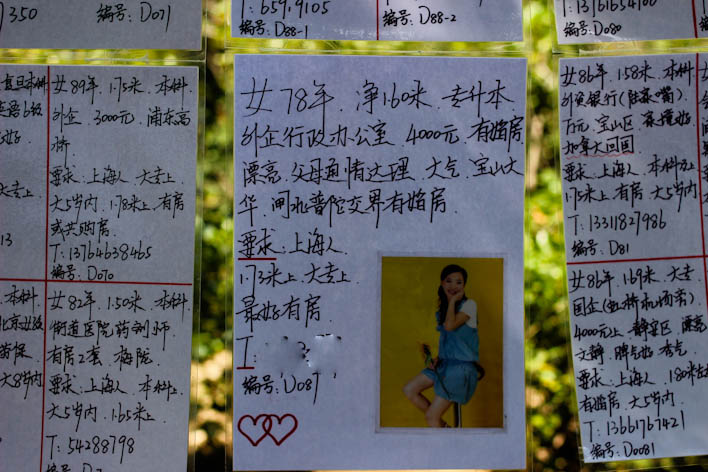 A wedding curriculum vitae with photo!

How the Singles Market works ?

It’s pretty simple. You prepare a “marriage curriculum vitae” of your son (or daughter), print it and display it at the Singles Market in the hope that the other parents will consider your “offer” and then arrange a meeting between your son and their daughter.

The purpose? Get them married as soon as possible.

Of course you don’t have to limit yourself and just expose your son’s curriculum. You are very welcome to take action and check the curriculum of the potential matches for your son. You talk with the other parents, exchange business cards (it would be more exact to call them “wedding cards” but, hey, marriage is business, isn’t it?), set up a meeting between your children and hope for the best.

What’s the best? To get a male heir of course. But a little girl would be ok too! After all we are in Shanghai, where women rule ; ) 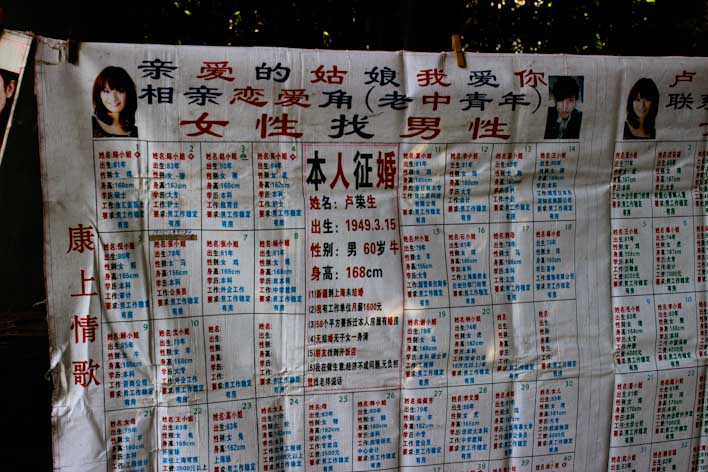 After reading hundreds of them I concluded that the most common items of a marriage curriculum are the followings: 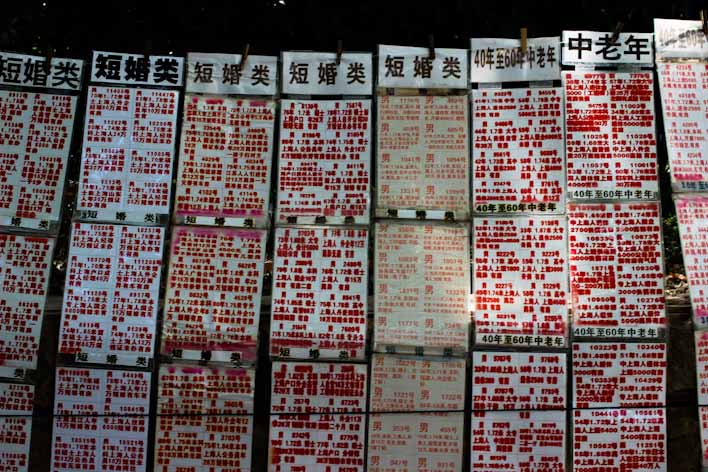 My impression is that, as usual, 9s gather with 9s and 4s gather with 4s. That is, if I have a tall 22 years old Shanghainese daughter that earns 20,000 RMB per month, then I won’t settle for a short poor guy from Henan province. Oh my Gosh, a farmer : O

However, if my daughter is 39 and has no education, I’ll probably open my heart and accept under my roof also a weaver coming from Sichuan Province. 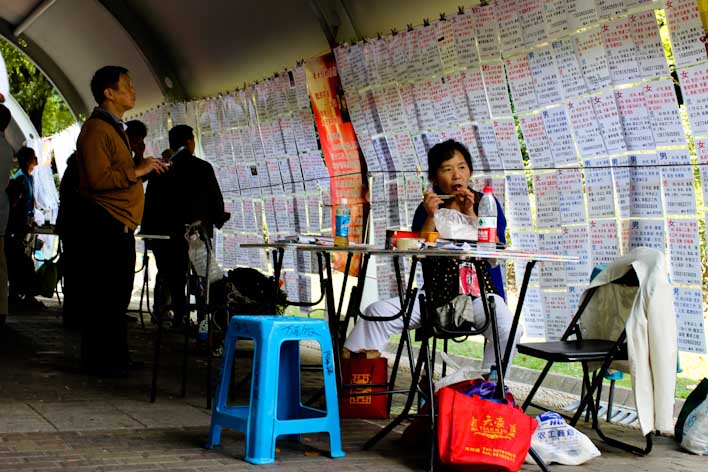 An agent at work

What if you have no time to attend the market every week?

No worries! This business is so popular that you’ll have no problem finding a “marriage agent” that will take care of your son, expose his curriculum every weekend, and do his best to find a suitable match for him. Kind of real estate agents.

Now, these aren’t small agencies (just check the above photo). These guys – and girls – are handling hundreds (thousand?) of the curriculum every single week. I wonder what’s their commission. I asked around but nobody wanted to share this precious information.

There is space for a white devil?

I was surprised, but the answer is “Hell yes!”

I visited the market with my (ex) girlfriend and, just to make fun of me, she started to talk with the parents of the maiden girls that gathered in the square and ask if they would accept a white devil (pointing to me).

A couple of them didn’t reject me on the spot. On the opposite, they started to ask key questions such as “What’s the devil’s job?,” “How much does he earn?” and this kind of info. One even asked for my phone number but I kindly refused. After all, I have no hukou!

Yes, Chinese society has changed a lot, in many aspects much more than Western society. However, there is still a lot of pressure, especially when it comes down to getting married and giving an heir to your parents. It comes down from Confucianism. It will probably change in the future, but it will still take time.

And yes, if you are dating a Chinese girl that lived abroad or, for some reason, is very independent, it’s possible that she doesn’t feel any pressure to get married nor see herself as a shèngnǚ, a term that means “leftover woman” and that encompasses all the ladies that at the age of 27 aren’t married yet. I know it quite well as my last Chinese girl is technically a shèngnǚ and doesn’t give a fuck, she just lives her life on her terms. However, this doesn’t surprise me at all, she lived seven years abroad, she speaks five languages and she has an income way beyond average (even for Western standards).

Strangely enough, everybody talks about leftover women but nobody seems to pay attention to the pressure that Chinese guys must hold up. Because the truth is that they have the same obligations as the ladies. This is one of the reasons for which gay Chinese men often decide to get married and have children (often with gay women so there are no sexual expectations both ways).

Finally, I’m not surprised that in China divorces are quite common and keep rising (according to a survey almost three million marriages ended in divorce last years, with a 7.65% increase from 2011). If you are forced to get married too young and for the wrong reasons you are much more likely to choose the wrong person!

Do you have a Chinese girlfriend or boyfriend? Does she/he feel the pressure to get married as soon as possible?