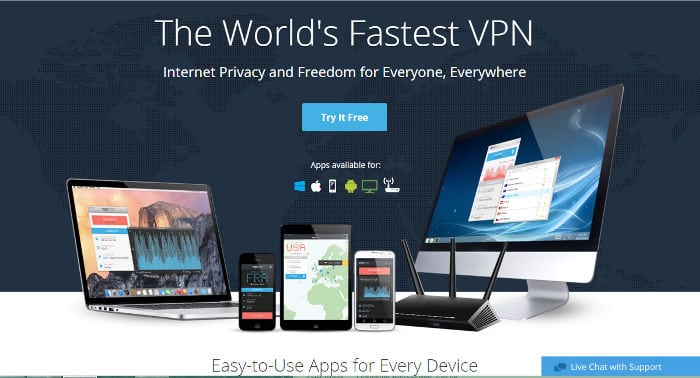 Over the past few years, we have been using VyprVPN in China to browse the internet securely and to access websites blocked in this county. During this time, VyprVPN has demonstrated that it is a fast, reliable, and extremely secure VPN. Below, we describe our impressions of this VPN and why we believe that it is one of the VPNs that offers the best security when you browse the internet.

Why is VyprVPN the most secure VPN?

Accessing the internet can potentially be dangerous, as other people can access your personal data and use it for their own benefit (identity theft or by using your banking information, for example). This danger is greatest in some countries in Asia, most of all on public networks. Below, you will find three reasons I think VyprVPN is one of the most secure VPNs that exists. 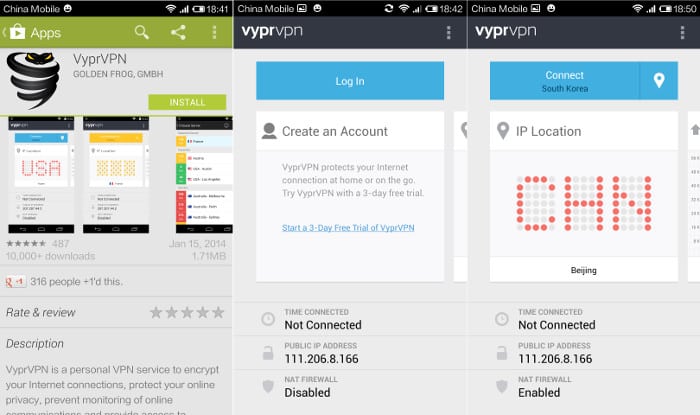 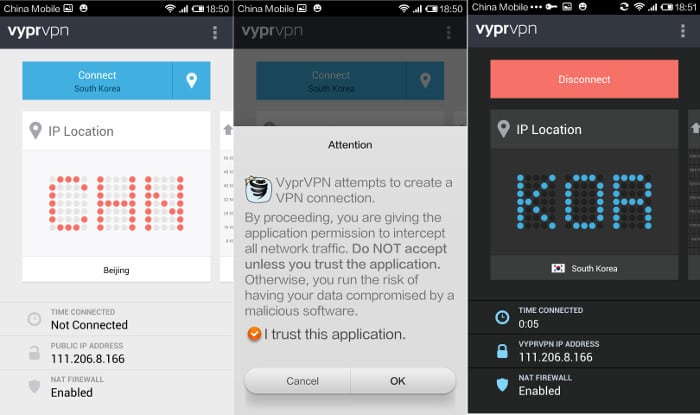 Installing VyprVPN on my smartphone: As you can see, it only took me two minutes to download the app, sign in, configure my connection, select a server and activate my VPN.

VyprVPN is not the cheapest VPN on the market, but like always, you get what you pay for, and I think that the features that I have just described are well worth a few more Dollars.

At the moment VyprVPN offers 2 options: the “basic” option costs 9.95 USD per month (or 5 USD per month, if you pay for 12 months in advance): you will get 3 simultaneous connections and all the encryption protocol described above (excluding the Chameleon protocol).

While this package may be enough for some people, you can also go for the “premium package”, which costs 12.95 USD per month (or 6.67 USD per month, if you pay for 12 months in advance): you will get five simultaneous connections, all of the encryption protocols that I listed above, and the NAT Firewall (particularly useful on wireless connections). 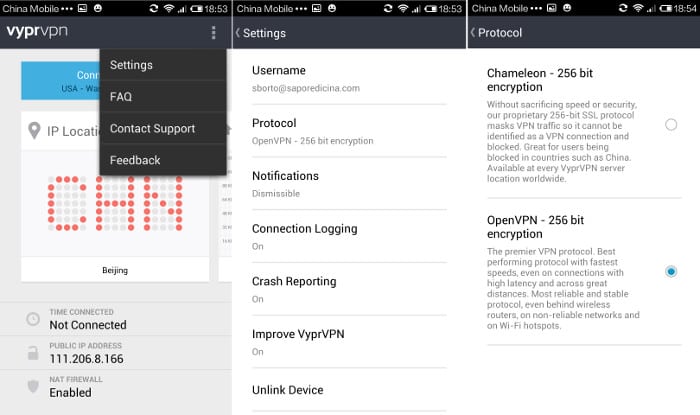 Configuring my encryption protocol on my Android smartphone

In this last section, you can find some suggestions on how to make the most of VyprVPN.

First of all, use the protocol that meets your needs. To select the most adequate protocol, read the brief description offered by the software. For example, if your priority is the security of the connection, you should use the OpenVPN protocol. On the other hand, if you don’t mind sacrificing a bit of security in exchange for speed, you might prefer the PPTP protocol.

To select a protocol, go to the tools menu of the VyprVPN application (the gear icon on Apple devices or the three points icon on Android devices) -> click on Settings -> click on Protocol and select the protocol (see the above screenshot). 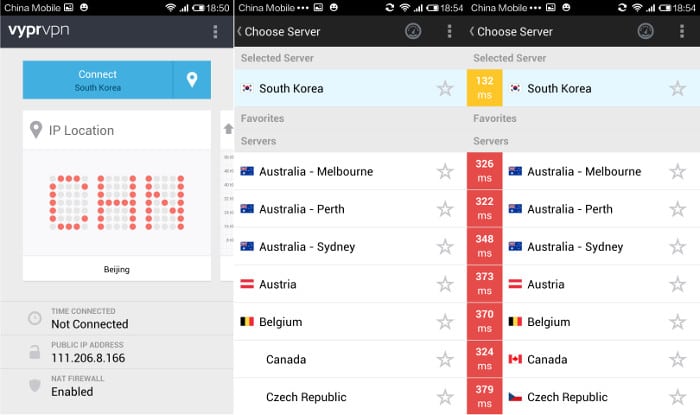 Test the ping (this is the time between the device and the server) and select the best server. You can do this by clicking on the “location” icon (beside the connect button),  clicking on the “speedometer” button (beside “select server,” see screenshot), and selecting the server which returns your ping the quickest (given in milliseconds, ms), as a shorter ping means a faster connection.

Does VyprVPN work in China?

Yes, at the moment, VyprVPN works in China. Also, in this article you find a comparison of the best VPNs for China.

How much does VyprVPN cost?

Is VyprVPN safe and secure?

VyprVPN has built a reputation as one of the most secure VPNs on the market. The main reason is that it offers its own encryption protocols which were designed to be more robust than standard protocols.

Additionally, VyprVPN uses its own servers and offers NAT firewall. Both these features contribute to security, and not many other VPNs offer them.

Where is VyprVPN located?

While the company that owns VyprVPN (Golden Frog GmbH) is located in Switzerland, VyprVPN offers servers in approximately 50 countries.

When do you recommend VyprVPN?

As we have said, VyprVPN is one of the most secure VPNs out there. Therefore, we especially recommend it to people who are particularly concerned about security. If all you want is a cheap VPN that works in China, VyprVPN might not be your first choice.

How long have you been using VyprVPN for?

We started to use VyprVPN in January 2014. VyprVPN has worked in China the majority of the time, even though there have been times when it has been temporarily down (but this has happened to pretty much every VPN).

VyprVPN is an excellent option if your want to browse securely, in particular in certain countries where accessing public networks implies a risk. In addition, VyprVPN has proved to be a fast and reliable VPN for avoiding geographic limitations on internet use.