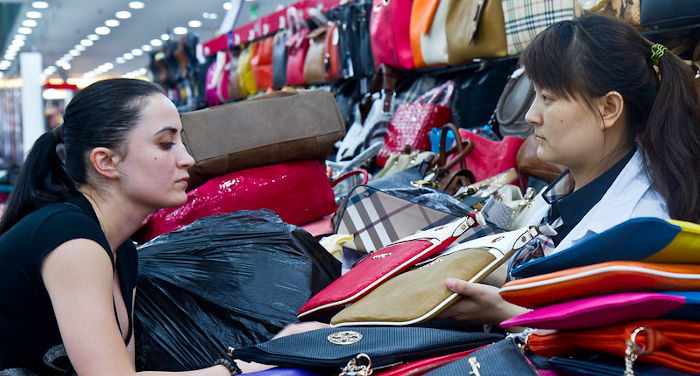 What are the Chinese fake markets?

The first time that I went to China, right after leaving one of my friends told me:

“Don’t come back to Italy without checking out at least one of the fake markets in Beijing.”

Fake market? What did that mean?

I never heard of them, and didn’t know of the existence of this parallel world until one day, at the end of my lessons at the Beijing Language and Culture University, with one of my colleagues I headed toward one of the most famous fake markets in Beijing, the Silk Market (秀水街, Xiushui Jie, in Chinese), in the Chaoyang district.

It was one of the most enjoyable experiences of my first trip to China. After weeks of frustration in university, finally a little shopping and entertainment.

The Silk Street Market is an actual building of fakes, each floor with specific products, from shoes to clothing, to electronics and toys, to perfume to accessories for the home. A shopping mall from which it is impossible to leave without making at least one purchase among the thousands of articles offered.

Once inside, you’ll be fascinated and even a little perplexed since you’ll ask yourself how all this is possible. But right afterwards you too won’t be able to help but wander around in search of “bargains”.

Rules to not get ripped off at the fake market

In the Chinese fake market you can find everything, but here are a few rules to avoid coming home to find out you’ve been “ripped off”.

First rule: prices and the art of haggling

The first rule of these markets is: HAGGLE; the Chinese love to haggle, and once inside, you’ll find that all the linguistic difficulties you had just days before, magically disappear.

As an expert in the art of haggling, the merchants of various stores will try at the outset to offer prices that although seemingly reasonable to the eyes of a Westerner, can actually be bargained down since the first price is usually five to ten times more than the final one.

Here are some basic fundamentals for bargaining at fake markets:

Inside the market you’ll find differing qualities for every product; although they’re all imitations, often the first product that they’ll offer you will be of low quality and/or defective (such as a shirt with markings or holes).

Always pay using Chinese Yuan. Even though all types of currencies are accepted in this type of market, the prices offered in Yuan will always be better than in Euros or Dollars; so I recommend that you only use Yuan.

Another bit of advice is to avoid using credit cards since quite often, especially in the past, many have found that their card has been cloned.

“I don’t have this in that color here (or this size, etc), follow me for a second and I’ll get it for you.”

Even though it is possible that the request is genuine, it is also possible that following the vendor into his store you’ll find yourself in front of two hooligans that will relieve you of your wallet.

China, in general, is not at all a dangerous place, but the rules of common sense still apply!

Where to find fake markets in Beijing?

Fake markets aren’t present in all of China, because being an exclusively tourist attraction they are concentrated especially in the cities of Beijing and Shanghai.

As far as Beijing goes, the most visited one with the widest variety of products is the Silk Street Market (秀水街, Xiushui Jie) located at 8 Xiushui East Street, in the Chaoyang district.

To get there, take Line 1 of the metro to the Yonganli stop and follow the signs for the Silk Market (exit A).

This is the third tourist attraction in Beijing and was opened at the beginning of the Eighties and today is host to more than a thousand vendors inside.

After the conversion of the Ya Show of San Li Tun to the fake market shopping center, the second most famous fake market in Beijing is probably the Pearl Market (红桥市场, Hongqiao Shichang), located at 46 Tiantan East Street.

To get there, take Line 5 of the metro to the Tiantan Dongmen stop and take exit B.

This market is visited by more than a million tourists a year. Unlike the other merchants, this one also specializes in the sale of pearls: pearl merchants are found on the third, fourth and fifth floor of the building.

Besides clothing, shoes, electronics, watches and silk, at this market you can also buy food, especially fish, from frutti di mare to the most valuable ones.

Where to find fake markets in Shanghai?

In Shanghai the situation is more or less the same: the same products, same quality, almost the same prices (in my opinion the prices are a little higher in Shanghai).

Just as in Beijing, a tourist in Shanghai should include on their list of attractions to see at least one of the large markets in Shanghai.

The first is the Pudong Market (浦东亚太新阳市场 , Pudong Yatai Xinyang), located at 2002 Shiji Dadao, in the Pudong Xin district.

To get there take Line 2 of the metro to the Shanghai Science and Technology Museum stop. The market is located inside the station itself.

If you want to go by taxi, the easiest thing to do is have the driver leave you in the square alongside the entrance of the metro, asking in fact to be dropped off at the Shanghai Science and Tecnology Museum station (in Chinese: 科技馆地铁站, Kejiguan Ditie Zhan).

The second market I’d recommend is the Fenshine Market (风向市场, Fengxiang Shichang) at 580 Nanjing West Road [Update: At the moment this market is close], at the intersection with Chengdu Road. This market is more centrally located than the first and can be reached by foot in about fifteen minutes from the Nanjing West Road metro stop (line 2), or on foot for fifteen minutes from the stop at People’s Square, exit 11 (line 1, 2 and 8).

Here you might find vendors who will ask you to go to the “higher floors of the building”: don’t worry! That’s where you’ll find the best quality merchandise, the kind most appealing to we Westerners.

Regardless of which market you decide to visit depending on budget and availability, in my opinion this is one of the experiences you have to do at least once in your life: first of all you’ll have a good time, whether in the end you decide to buy a bag or just a magnet; after which you can also discover a different world, a different China that isn’t possible to find in any other place.

And trust me, once you enter, you surely won’t be disappointed.

So, what are you waiting for?

What should I buy in Beijing?
A lot! You can buy everything from tailor made shirts, suits, dresses, belts, sunglasses, watches, and much more. Also, don’t forget to buy tea, silk products, and other souvenirs!

You can buy electronics as well, but personally I prefer to do so in Hong Kong instead. There’s no import taxes and you can buy genuine products at a lower price.

What’s the best fake market in Guangzhou?
Garment Wholesale Center has much textiles, handbags, and clothes. Guangzhou Guoda Shoes Mall is another option in case you want to buy shoes, only. Baiyun Leather market has plenty of products with designer labels, even it’s more pricey compared to some other markets.
Where’s the pearl market in Shanghai?
The Hongqiao New World Pearl Market is located at 3721 Hongmei Lu, near Yan’an Lu (虹梅路3721号, 近延安路) which can be reached with subway. It’s open from 10am – 9pm daily.
How much is a custom tailored shirt in China
Making a tailor made shirt can be a far better option than buying fake shirts. The price of tailor made clothing depends on the quality of the fabric and the location of the shop.

Shirts can cost everything between 120 RMB – 500 RMB, from my experience. If you go to a decent tailor at Nan Pu Da Qiao in Shanghai, for example, you shouldn’t pay more than 200 RMB for a cotton shirt of normal quality.

What’s the best fake market in Shenzhen?
If you want to shop like a local, you can go to Dongmen area. If you want electronics, go to the SEG computer market. Luohu Commercial City has pretty much everything, while the Da Fen Village is your place to go if you want to buy arts.
Where should I go for shopping in Chengdu?
If you’re in Chengdu, you have to go to Jiulong Plaza(九龙广场) . Here, you’ll find pretty much everything and it’s one of the most popular markets in Chengdu.

Some other places you should check out are the Taihua market(泰华) and Xinzhongxin（新中心). Here, you’ll find much clothes, shoes, handbags, and more. It’s similar to the Silk market in Beijing.

This article was written by Federica Urso, who studied Chinese both in Beijing and Chongqing.