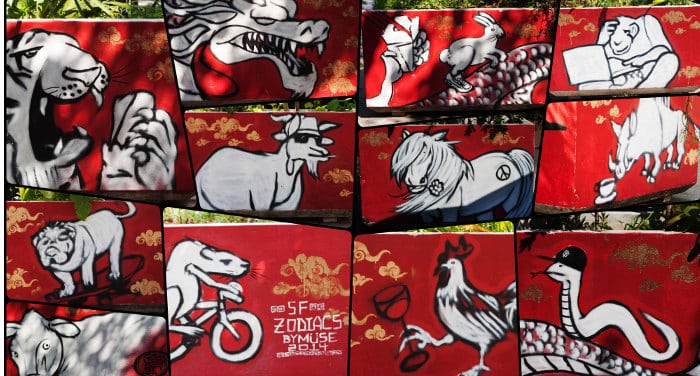 The Chinese Zodiac, or shengxiao (生肖), has twelve symbols, just like the western one (given to us by the ancient Greeks). And, even in this case, each sign is associated with particular character traits. The difference is that while in our Zodiac each symbol corresponds with a certain month, the Chinese Zodiac corresponds with a particular year, For example, 2015 is the year of the Goat!

It is said that Buddha, when he was near to dying, gathered all animals of the earth. However, only twelve bothered to come say goodbye. So he – being magnanimous as few others could – decided to reward them by baptizing each lunar phase with the name of one of the animals that came. The first to show up was the mouse (never trust the rats). After that, arriving in order were the buffalo, the tiger, the rabbit, the dragon, the snake, the horse, the goat, the monkey, the rooster, the dog and the pig (the usual latecomer).

Another version of the story says that one says the gods decided that each animal should correspond to a symbol on a first-come, first-serve basis. And so the first twelve to show up took all the available symbols.

Personally, being a notoriously practical person, tend to believe the following explanation: six of the symbols correspond to the most common domestic animals in China (buffalo, horse, goat, rooster, pig, and dog) while the other six are, historically, beloved animals by the Chinese (mouse, tiger, rabbit, dragon, snake, and monkey).

The four pillars of destiny!

Actually, I lied to you before. But I did it because I didn’t want to frighten you. To say that each sigh corresponds only to a year is not exactly true (did you think the Chinese would make it that easy?).

Find out your “internal animal”

It is said that the internal animal will determine your last years of life and offer information about your parents. It is easy to calculate because it corresponds with the month of your birth:

Find out your “true animal”

Calculating your true animal – which offers information about your adult life – is extremely complicated. You can do so by  clicking here and inserting your date of birth.

Find out your “secret animal”

Your secret animal will reveal your true character and to calculate it all you need to do is know the hour of your birth:

So myself, having been born March 10, 1983, at 2 in the afternoon (greatly falsified data), am externally a Pig, internally a Rabbit, truly a Dog and secretly a Goat.

But it’s not over. There are actually another two factors that influence your character and destiny.

How do you find if your sign is Yin or Yang? It’s easy:

To find out your element just know the last digit of the year of your birth:

What does it mean? I ignore this. No, just kidding.

each element dominates two following years so that the cycle repeats every ten years. Each year the dominant element will interact with your element (determined, exactly, by the last digit of your year of birth) in a positive or negative way. If, for example, we are in the year dominated by water and your element is fire, I’m sorry but you’re in a load of crap. If however your element is wood, for you it will be a lucky year.

For those fixated on the math

If you combine the 12 corresponding signs of the year, month, day and hour of birth, the Yin and the Yang and the five elements, you get 12^4*2*5 = 207.360 possible personality combinations. Tell me the truth, you never thought of this did you?

A calendar of the next twelve years

What are the lucky signs for people born in the year of the ox?

In which other Asian countries to they have zodiac?

You can find zodiacs in various Asian countries, including:

There are some minor differences. For example, the Korean zodiac is practically identical to the Chinese zodiac, but the sheep is replaced with the Korean word for goat, yeomso. In Japan, the zodiacs are almost the same, but the pig is replaced by the wild boar and the sheep with the goat.

What are the 12 Chinese zodiac animals in order?
The 12 Chinese zodiacs signs in order are:
Why is not the cat in the Chinese zodiac?
In a contest, all the animals had to cross a river to reach the Jade Emperor. It’s said that the cat and the rat were sitting on the back of the ox when crossing the river. But, the rat pushed the cat into the water and was left to drown. This is also the reason why cats hunt rats and are seen as enemies nowadays.