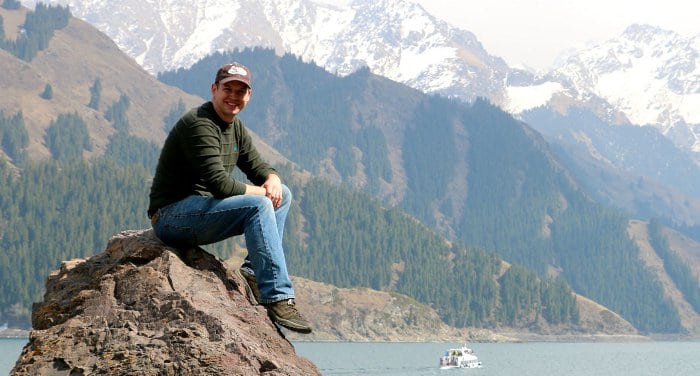 Today we’re going to talk with Josh Summers, the founder of Far West China, as far as I know the best website dedicated to Xinjiang, one of less known and most beautiful provinces of China.

Josh, thank you for accepting to answer to some questions for SDC. You arrived in Urumqi, the capital of Xinjiang, in 2006. How did you end up there?

My pleasure! I’m honored to chat. Our arrival in Xinjiang back in 2006 is a long story that can be summed up in pretty much one word: “accident”. Seriously, who in their right mind travels halfway across the world to a place they can barely find on a map, much less properly pronounce? People who don’t know what they’re getting into, that’s who.

That’s not even the craziest part. Once we arrived in Urumqi in 2006 we only stayed there for two days. Our ultimate destination was Karamay, an even smaller and more remote town about four hours deep in the desert. We did it party out of a sense of adventure but mostly because a trusted friend convinced us it was a good idea. Ha!

I know that, after you spent some years in US, in 2013 you decided to go back to Xinjiang. Why?

I never really wanted to leave Xinjiang in the first place, I just hated teaching English. Some people are good at it and love it but not me. I prefer doing business and the opportunity just wasn’t there in Karamay. It wasn’t until 2013, after my son was born, that the appropriate opportunity arose for us to return to Xinjiang.

Even if Xinjiang is much less known the Tibet, the political situation of the two provinces is, under many aspects, similar. After the terrorist attack of last months, do you think that is still safe to travel to Xinjiang?

I’ve been holding my breath this past week as we’ve silently passed the fifth anniversary of the Urumqi riots. That was July fifth and thankfully nothing happened. Things have been tense under the surface in Xinjiang for years now but as far as I can see all is calm on the surface.

Here’s what I always tell people: despite the news reports, Xinjiang is in my opinion just as safe as any other part of China. You probably need to be more worried about getting in a car accident – which happens all over China – than getting caught in the middle of this ethnic conflict.

How are you living this situation?

I’ve certainly been concerned this past month but never been too scared to leave my home. The most recent bombing occurred less than two miles from my home here in Urumqi and yet life continues as normal in our neighborhood. There are more metal detectors to walk through, more military patrols and now many of the public parks are heavily restricted, but honestly that feels quite normal in Xinjiang.

During the riots of 2009 you lived ten months without internet or the possibility to call abroad. Can you tell us something about this experience?

It was tons of fun! Ok, so not “tons of fun”, but it wasn’t as bad as it sounds. While I don’t agree with the decision to cut the internet for such a long period of time, everybody here actually got used to not getting online. For us it was more annoying that we couldn’t place an international phone call to let our family back in the US know that we were ok.

While the internet blackout was detrimental to businesses, including my own online business, it proved to me and everybody else that being “socially disconnected” won’t kill you. In fact, I quite enjoyed not having to see pictures of my friend’s dogs, what they had for dinner or commiserate over their “it’s complicated” relationship. 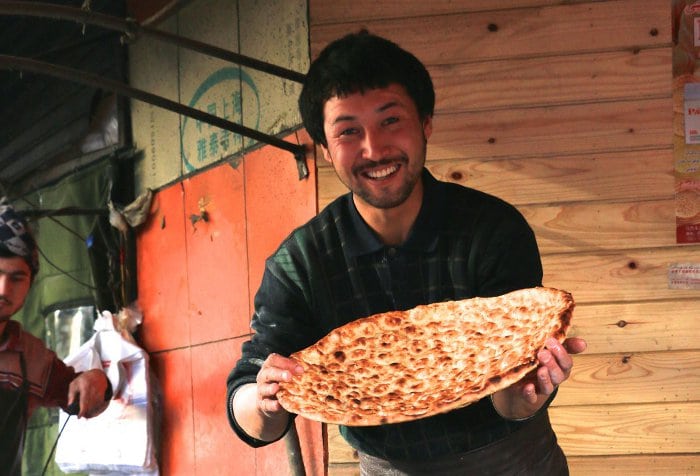 Let’s come back to a “lighter” topic. Many readers of SDC already live in China or are planning to move here quite soon. What would be the pros and cons of choosing Xinjiang?

Xinjiang is the melting pot of Asia. I have friends who are Han, Uyghur, Hui, Kazakh, Russian, Tajik, Uzbek, etc. I love being exposed to such a variety of cultures, which includes both their customs and their foods. For me this is a huge benefit of living here in Xinjiang.

For those wanting to learn Mandarin, I love the fact that Xinjiang doesn’t have a huge expat community. For most of my friends, because we come from different cultures, Mandarin Chinese is our only common language. Being forced to speak the language you’re learning in a natural setting on a daily basis speeds up the learning process immensely.

The biggest “con” of living out here is travel inconvenience. If you want to travel anywhere, even within the province, the time and monetary costs are high.

Do you have any tips for finding a job in Xinjiang?

Frankly speaking, if you’re a white American or British citizen who has an university degree, teaching certificate and at least two years of teaching experience… it’s incredibly easy to get a job in Xinjiang! They’ll fly you out here and you’ll have more work and job offers than you can count.

For the rest of us, however, it’s not that simple. You either need to have a connection in a school or – and this is what most people end up doing – just take an extended vacation here to Xinjiang and market yourself. The biggest fear for most schools is that they’ll spend all this time and money bringing in a teacher who ends up being a waste of money, so if they can see your face and talk to you personally you have a much higher chance of getting a job.

What about travelers? Any special tips?

This is something I tell everybody who comes to Xinjiang because I find it’s something that most people just don’t fully realize: Xinjiang is HUGE. You have to factor this into your itinerary. It takes a full 24 hours by train or bus to get from Urumqi to Kashgar. Urumqi to Altay (home of Kanas Lake) is at least 7 hours. If your time is limited you need to consider flights despite the obvious expense.

My only other tip is to try to learn a little Uyghur language before you arrive. It will go a long way in endearing you to the locals and you don’t have to learn much. Lonely Planet has a short guide in its China book and there’s also an independently published Uyghur phrasebook you can find on Amazon. 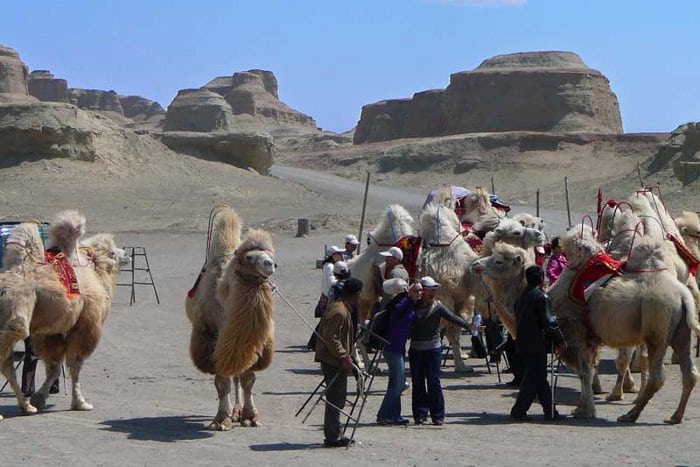 What is your favorite place in Xinjiang and why.

My favorite place is Turpan, hands down. Part of the reason is because it’s more accessible than many of the other places around Xinjiang but also because I think it is a beautiful representation of Uyghur culture.

I could easily spend three full days going around Turpan seeing places like Jiaohe Ancient City ruins, the Emin Minaret, Tuyoq Valley and many other gorgeous locations. It’s a small city that doesn’t get the attention Kashgar does but in my opinion is just as fascinating.

What about your favorite food?

Ooooh… if you only had a day or two to spend in Xinjiang there are three things I would say are “must-eat”: Big Plate Chicken (大盘鸡) and Uyghur Pollo (抓饭). The first is a well-known Hui dish that you can find all over China but once you taste the Xinjiang version you’ll never go back. Big Plate Chicken is like it sounds: a big plate of chicken mixed with potatoes and peppers cooked in a delicious red sauce.

Uyghur pollo is another dish that is a favorite among travelers. If you’ve never had lamb meat before, this is the best way to try it. Pollo is a rice pilaf dish familiar to many Central Asian countries, but the Uyghur version has a unique taste that is unforgettable.

I know you traveled pretty much on every corner of Xinjiang. Do you have any “funny” story like this one?

A story that beats diarrhea? I don’t think I can do that, but here’s my best shot…

My favorite story was when a friend invited me to the grand opening of a coffee shop in Karamay. I arrived just to show my support and took the obligatory photos with the chef, ate cake, etc. Nothing out of the ordinary.

A year later a friend was visiting from Chengdu and asked if we could grab coffee. Sure, I know just the place, I thought. We walked in and immediately started getting stares. Then giggles. Then all-out laughs.
I turned around and to my horror saw a life-size photo of me and the chef on the wall. That’s not even the worst part. I was wearing the exact same clothes.

You think they’d give me free coffee, right? Not so much.

Are you planning to live Xinjiang any soon?

I don’t plan on it, but check back with me in a few years and I’ll let you know how my business ventures are going : )

Josh thank you for your time!

My pleasure! And if anybody has any questions, feel free to use my contact page to ask.

P.s. When I visited Xinjiang, in 2012, Josh’s website has been quite useful to me as it was one of the few resources in English language about Xinjiang that I was able to find. If you are planning to visit Xinjiang or, anyway, you want to know more about this great land, just head to the Far West China Travel Page.