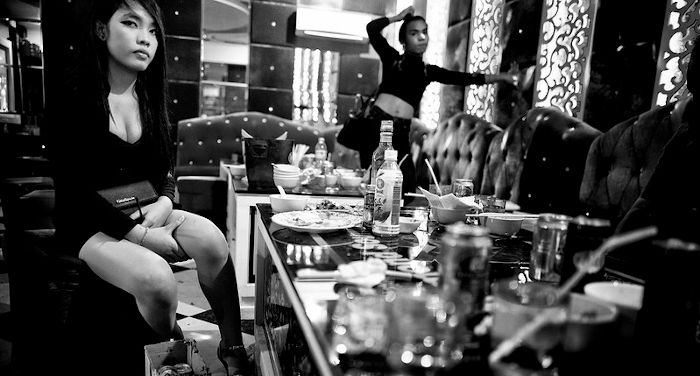 I wrote this short story in 2011. It was firstly published in another website, but the website closed down last year, so we decided to republish the story here on SDC, as we think it’s still interesting, and relevant!

I’m more bored than ever and I decide to contact a girl from Anhui province that I met two days ago on the pedestrian bridge at the intersection between Yan An Road and Xi Zang Road. I send her a text message:

“我在KTV工作.你们几个人?” (I’m working at the karaoke. How many of you?)

“和你聊天跳舞，你给我钱吗?” (If I talk and dance with you, will you pay me?)

“Oh shit, another prostitute!” I think while I give up and order a Carlsberg.

I had this conversation during my first year in China, 2010, when it still surprised me if a girl I met in the daytime turned out to be a part or full-time prostitute.

With time, I understood that – especially around Nanjing Road, the most touristic pedestrian road of Shanghai – it’s easier to find a hooker than a decent pizza (unless you like Pizza Hut).

There are girls that call you at your hotel room to ask if you need some “help” – the (in)famous ding dong girls.

You will meet hairdressers that invite you for a “massage” in the backroom of their shops and girls that will hand out their business cards on the street promising “24 hours on call for service and please” as in the photo.

You can always find a dancer that is willing to play perudo (a popular dice game) and maybe leave the club with you as long as you pay for her Ballantines with green tea (although having sex with her will probably cost you an extra fee).

And then the queens of the Chinese sex industry, the KTV girls (the Anhui’s girl whom I talk at the beginning of this article is one of them).

“KTV” is what the Chinese people call karaoke. If you have never been to Asia or watched Lost in Translation, you might think of a “KTV” as a lame bar where people start to sing “Yellow Submarine” or “Satisfaction” after they drink seven vodka and Redbulls.

This is what you get in Europe. And I guess in America it must be pretty much the same.

However in China when a bunch of guys are heading to a KTV is a very different setup.

There are KTVs for all social classes.

You can choose an expensive venue where businessmen and politicians gather to discuss important matters surrounded by beautiful girls that, from time to time, don’t limit themselves to laughing at the customers’ jokes and drinking Harbin beer.

You can opt for less pretentious clubs that even white-collar workers can afford or for a cheap bar designed for the construction workers that left their wives in the countryside.

The average Chinese KTV is a hybrid between a nightclub (lots of lights and girls in miniskirts walking everywhere) and a motel (because of the fact that you rent a room for singing a specific number of hours).

The KTV’s rooms are equipped with a big television where you can see the music videos and words of the songs, a couple of microphones, a small table and some couches.

Although it has been documented that sex in the KTV may happen – see the book Red Lights: The Lives of Sex Workers in Postsocialist China by Prof. Zheng for the crude details, – these rooms are not the equivalent of a bedroom where the customers have sex with the workers.

Many customers are happy to feed their egos by having a couple of girls around, drink with them and spank their ass from time to time. However, the ones interested in having a sexual rapport with the hostesses will reach a “personal agreement” with them and meet up again outside the KTV.

The interesting fact is that, even if KTV is spread all around China, as a foreigner is not so easy to come across to their real function. I’ve been to a couple of KTV myself and I never had a girl overtly approaching me. I guess that you have to ask.

When talking with a foreigner, many Chinese people will deny that the KTV girls are often prostitutes. I even meet some people that deny the existence of KTV girls whatsoever. They will argue that if there are so many KTV it’s because Chinese people love to sing.

And this is true: it must be pointed out that not all the KTV offer female companions.

However, this is only half of the story.

This is China, a country where preserving the appearance and saving face will always be a priority.

What is KTV?
KTV stands for Karaoke television, a musical entertainment where you play songs on a TV screen and read the lyrics while singing. KTV is especially in Asian countries, including Japan, China, Macau, Hong Kong, Vietnam, Malaysia, Singapore, and Cambodia.
Do they have English songs on KTV in China?
They usually do, but English songs sometimes come in a limited amount. You’ll mostly find old classic songs from bands and singers like Elvis Presley, ABBA, Robbie Williams, and similar.
How much does it cost to visit a KTV in China?
Visiting KTVs is comparably cheap in China and you generally pay RMB 100-400 per hour, according to the size and standard. Prices differ between cities and you’ll find the highest rates in places like Beijing and Shanghai. In remote areas and smaller cities, prices are significantly cheaper.
What is Chinese karaoke?
The Chinese don’t have their own version of karaoke per se. Chinese karaoke simply refers to Chinese karaoke joints and where you can sing English and Chinese songs, at the same time as you drink and eat.
Can I buy alcohol on KTV in China?
Yes, you have no issues buying alcohol at KTVs in China. It’s most common that people drink beer and soft drinks at karaoke. But, you can also buy a bottle of whiskey or vodka, if you prefer.
What are some popular Chinese Karaoke songs?
There are plenty of popular Chinese karaoke songs. Some examples are:
Is it legal to visit KTV in China?
Even if some KTVs operate illegally, it’s not illegal to visit them per se. You can check for recommendations of reputable KTVs on travel forums such as Tripadvisor.
From which country does KTV come from?
KTV stands for Karaoke television and originally comes from Japan. The word Karaoke comes from the words Karappo and Okesuture, which means “empty” and “orchestra”. Thus, it literally translates to “empty orchestra” as it’s music with missing melodies.