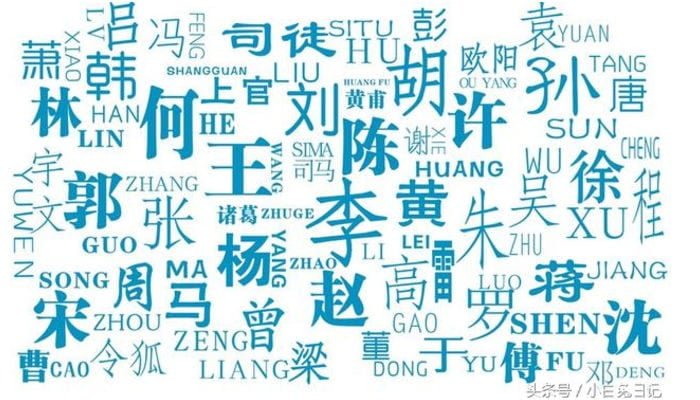 This article was writter by TutorMandarin, an online Chinese tutoring service that helps students how to speak Mandarin using an their Android mobile app and PC Software.

P.S. Click here to jump directly to an interesting infographic that showcases the most common Chinese surnames for each Province.

Naming is an absolutely integral part of Chinese culture. In the eyes of the Chinese, a child’s name can play a large role in determining his or her future education, career, and even marriage! Unlike English names, each Chinese name is individually created (not choosing a standard James, William, or Michael) and takes into account several factors for bringing good luck or fortune.

Chinese names, in contrast to their English counterparts, are made with family name first and then the given name. Children usually take their father’s family name, though it is legal for a child to follow either their father’s or mother’s family name. When choosing the given name, Chinese tradition places importance worth on the five elements (metal, earth, water, fire, and wood). The idea is that the correct balance of elements is needed to ensure the right name. 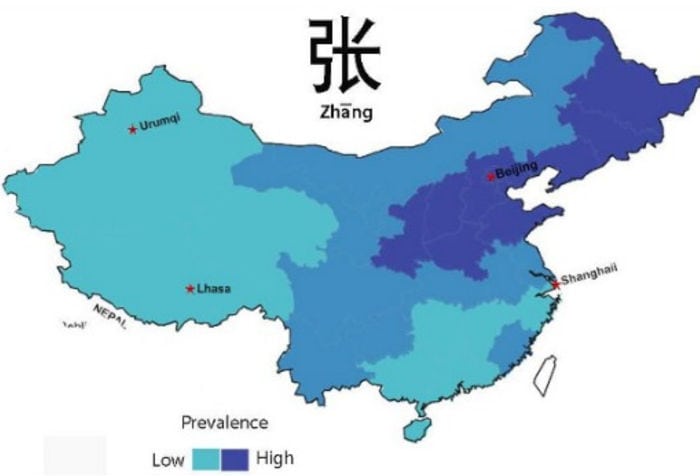 In the dynasties following the Song, the Three Character Classic (三字經, Sān zì jīng), the Hundred Family Surnames, and the Thousand Character Classic (千字文, Qiān zì wén) came to be known as 三百千 (Sān bǎi qiān, Three, Hundred, Thousand), from the first character in the titles. They were the most famous literary texts for students, almost exclusive boys, from an elite background.

When the student had memorized all three books, he had knowledge of around 2,000 characters. Since Chinese did not have the alphabet, this was an effective, albeit time-consuming, way of giving a “crash course” in character recognition, before understanding written characters.

Of the thousands of surnames which have been identified from historical texts prior to the modern era, most of them have been lost or simplified. Historically, there are about 12,000 surnames recorded, but only about a quarter of them are currently in use. There are many reasons for surname extinction, for example orthographic simplifications, taboos against the emperor’s name and so on.

Recent examples of surname extinction are the surnames 死 (Sǐ, which means “dead”), 難 (Nán, which means “hard”), and 豬(Zhū, which means “pig”). The reason is that these words have negative meanings, and thus people have been using these names less and less.

Chinese surnames do not always contain just one word. Chinese compound surnames exist and contain two to three characters. Many of these surnames derive from noble and official titles, professions, place names and other areas to serve a purpose.

Chinese given names show much more diversity than surnames, while still being restricted almost universally to one or two syllables. Given names are chosen based on different factors, including possession of pleasing sound and tone, as well as having positive associations or a beautiful shape.

For instance, 英俊 (Yīngjùn, which means “handsome”) and 美麗 (Měilì, which means “beautiful”) were quite popular and positive names before, but if your surname is 吳 (Wú), which is the homonym of 無 (not), then your name would become “not handsome” and “not beautiful”.

Today, two-character names are more common and make up more than 80% of Chinese names. However, this custom has been consistent only since the Ming Dynasty (1368-1664). About 70% of all names were only one character long in the past.

Given names resonant of qualities which are perceived to be either masculine or feminine are frequently given, with males being linked with strength and firmness and females with beauty and flowers.

For example, following the victory of civil war in China, many boys have “revolutionary names” such as 國強 (Guó qiáng, which means “a strong country”) and 建國 (Jiàn guó, which means “establish a nation”). Conversely, a lot of Taiwanese babies were named as 中華 (Zhōng huá, which means “Republic of China”) and 復國 (Fù guó, which means “Reinstate the nation”), hoping to get China back.

There has been a recent trend to name kids after specific occasions, for instance, 震生 (Zhèn shēng, which means “born in an earthquake”) is to commemorate the 2008 Sichuan earthquake and 奧運 (Ào yùn, which means “The Olympic Games which means “) is because of 2008 Olympics Games in Beijing.

From their earliest recorded history, the Chinese observed a number of naming taboos. The naming taboo of the state discouraged the use of the emperor’s given name and those of his ancestors.

The strength of this taboo was reinforced by law; transgressors could expect serious punishment for writing an emperor’s name without modifications.

The naming taboo of the clan discouraged the use of the names of one’s own ancestors. Generally, ancestor names going back to seven generations were avoided.

The naming taboo of the holiness discouraged the use of the names of respected people. For example, writing Confucius’ name was taboo during the Jin Dynasty.

Naming seems quite complicated in Chinese culture, people often hire a fortune teller and ask for advice throughout the entire family before to decide which is the best name for the kid. However, every name contains a unique story and expectation from the family.

Next time, why don’t you ask to a Chinese friend to explain the story behind his to you?