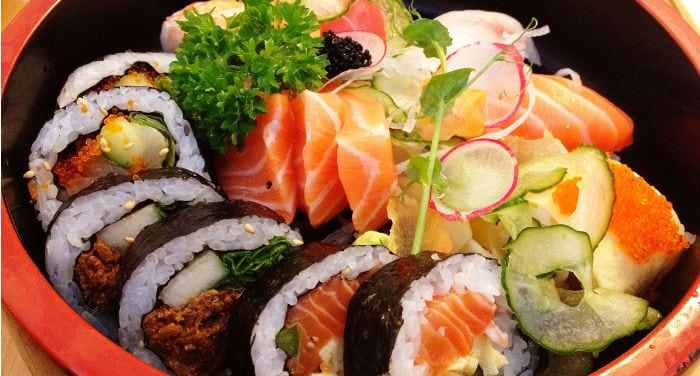 With globalization, “Eastern” dishes have become part of the eating habits in the Western part of the planet as well.

It has become a custom (and fashion) to eat lunch or dinner at the so-called All you can eat “oriental buffets” where, among many things, you can delight your palate with the typical Japanese “dish” called sushi (寿司).

Remember, to begin, that sushi is really Japanese and not Chinese as some people think (even if we say that sushi was born thanks to China).

It is also true that All you can eats (and Japanese restaurants in general) in the West are for the most part run by the Chinese, even if some pretend to be Japanese or to have Japanese cooks…

In this article I’ll seek to explain what this mystical sushi is and how it’s different from sashimi, another typical Japanese dish.

Sushi has now become an industry that produces billions of Dollars in Japan alone and eating sushi has almost become fanaticism, in my opinion.

Consider that in Tokyo there are restaurant chains specializing in sushi where you’ll have to wait in line from 5 in the morning in order to taste their gourmet dishes.

I’m talking about Sushi Dai and Daiwa Sushi, of which Marco Togni talks about in this video.

The history of sushi

The history of sushi is a very interesting story on the evolution of a rather simple dish. Originally, sushi was born as a way of preserving food.

Fish was put into rice to ferment, so that it might be preserved for longer. The rice was then thrown away and the fish was eaten. This method of preservation started in China and around the seventh century it also spread to Japan, where fish had always been the main food staple.

The Japanese, nevertheless, changed this method a little bit and also began to eat the rice. At the beginning of the Seventeenth Century, Matsumoto Yoshiichi of Edo (modern Tokyo) began to flavor the rice with vinegar to then sell it. In this way, instead of having to wait a few months, the fish could be eaten right away.

Over the course of the centuries, the methods of preparation and presentation has changed some, bringing us up to modern sushi.

But what is this sushi? First let’s go over the categorization of different types of sushi, in evident terms, I’ll say that sushi is any dish made with rice and vinegar, which could be filled with vegetables, wrapped in seaweed, and covered by raw, cooked or marinated fish. Sushi, in fact, means “sour” and refers to a vast gamut of foods prepared with a particular rice. 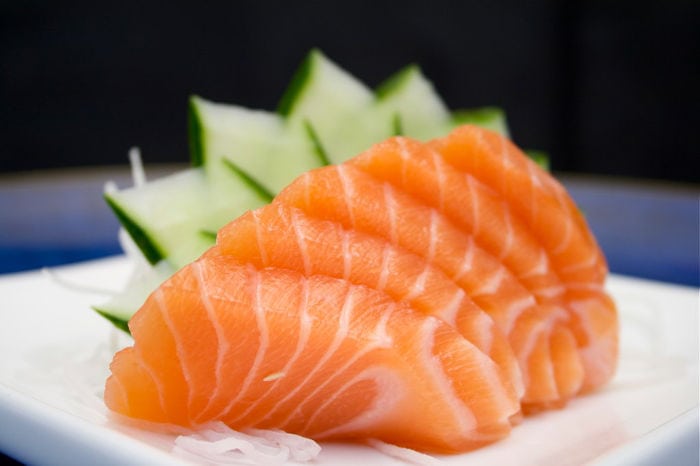 A dish of sashimi –

What is the difference between sushi and sashimi?

Sashimi (刺身) literally means “skewered body” which doesn’t only consist of fish, but also of meat cut rather finely.

Traditionally, this plate is laid upon a sort of decoration made up of daikon – an Asian radish – and the leaf of the perilla.

Sashimi is usually served with soy sauce and, for those who wish, the infamous wasabi (山葵), an extremely-spicy green- colored paste that takes its name from the radish from where it comes from.

Normally, with sashimi, as opposed to sushi, there is no rice. Even with sashimi there are different types that we won’t go into here.

Let’s now look at the most common types of sushi (as well as my favorite).

Since maki means “to roll”, we have this “rolled sushi”. This is a ball of rice wrapped in nori (dry seaweed) which includes not only the rice but also the condiments inside.

Here’s a small list of what a makizushi might have: avocado, cucumber, tempura (another Japanese dish), cream cheese, salmon, tuna, and so on.

Depending on the size, shape and structure, it takes different names: hosomaki which has a thinner shape; chumaki which is medium size; futomaki which are thicker; uramaki which generally has nori (dry seaweed) inside and rice outside; and temaki.

This is a small ball of rice pressed by hand that can have a pinch of wasabi on its tip and fish (usually salmon) in place of the nori. In place of fish there could also be egg, tamago.

This is a type of sushi served in a bowl of rice mixed with various condiments called “gu”. This type of sushi is perhaps the most common in Japanese homes because its easy to prepare.

Curiously, chirashizushi, in the majority of cases doesn’t have meat or fish. Instead it has egg, tofu, bamboo shoots and various vegetables.

This is a sort of fried tofu cavity (abura age) filled with sushi rice.

The world of sushi is truly vast! I hope I’ve given you a small basis from which to start… and now, as Goku says before every meal… ittadakimasu!