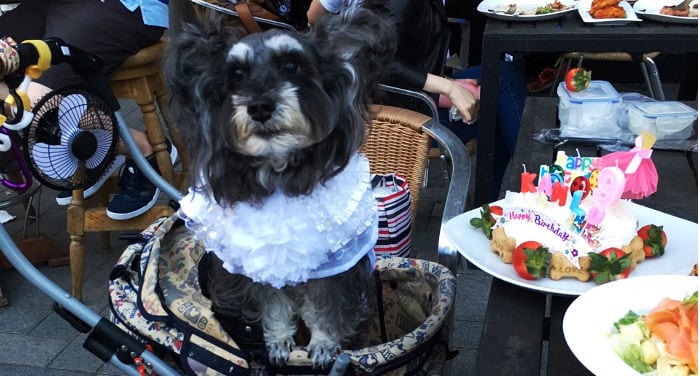 How many times have you heard it asked “do they eat dogs in China”?

It’s absolutely true but take note of this important distinction: it’s not as widespread as believed in the West and the dog meat festival in Yulin, in Guangxi province, is at the center of controversy and contention.

Despite attempts to block it by various animal rights groups (and not just them!) even this year, in the early days of May, when the arrival of Spring is generally celebrated and life renews, in Chinese cities they are restaurants and consumers, giving life to a horrible slaughter, consuming between 10.000 and 15.000 specimens in the ten days of the festival; the poor creatures are perhaps glad to end up cooked rather than to stay in le povere bestiole sono forse perfino grate di finire cucinate invece che rimanere in macabre cages.

The organizers insist that there’s no difference between eating the meat of pigs, poultry and dogs, arguing in favor of health benefits. Chinese newspapers speak of the event in purely cultural terms, not at all giving poor Rex, Lilly, Argo or Luna special status and branding like an obsession the criticism of Western public opinion.

Inevitably, just the idea that you would eat man’s best friend generates in many a sense of disgust and discomfort; not a whole lot different than what we provoke in Americans when we say that horse meat is appreciated in Europe: in the majority of the States the raising of horses for food is prohibited; for the sake of news, in quiet, respectful Switzerland there is no federal law stopping you from eating your pets at your own table, with dogs and cats first and foremost.

Therefore, the one without sin may cast the first stone!

That said, to allow readers to enjoy their next meal with a clear mind and relaxed stomach, let’s look at the other side of the argument, an actual law of canine counterbalance: the indiscriminate and overwhelming love that growing numbers of dog-loving Chinese, with Hong Kong in the front line, pour out on their darlings.

The legend says that the Pekinese (named for the capital) was the result of a love between a lion and monkey; however this race came about it is one of the oldest in the world, loved and pampered by emperors of the Heavenly Empire, unique in having the right of possessing the little dogs as pets, and had them held as actual sacred creatures to the point of having their subjects bow down in their presence. It is said that the imperial dogs had the power to chase away spirits and gave the environment the scent of jasmine; those that had the chance to host these loving critters in their home couldn’t help but envy the emperor…

All this changed in the 50’s during a full cultural revolution: the dog became not only the symbol of a rejected imperial past, but also the hated Western middle-class. Consequently even man’s best friend suffered and went through a class struggle.
Starting in the early 90’s, once again, the dog walked a historic path with its master: the course of the new China had rehabilitated it, bringing it to unforeseen excesses. In 2012 an enormous Tibetan mastiff named – not by chance – Emperor came to cost the embarrassing sum of 10 million Yuan (about 1 million and 300 thousand Euro).

There’s no surprise then that in Hong Kong dogs are loved, pampered, cuddled, even though it isn’t a “dog friendly” city. In many condominiums they are not permitted; where they are allowed, owners must comply to very restrictive rules and in the event of any disturbance reported by neighbors, they are forced to take the animal away immediately.

If we add the complete lack of internal and external space, being a dog owner in a vertical city is a mission. And here
is the good part. Owning a dog, little or big, is a real status-symbol. Much more refined than the latest designer bag or newly-released smart-phone.

Having a dog declares to the world that our house is big enough to accommodate it, we can provide for it, and that we are in touch with Western habits. It’s of little importance that in the majority of cases the critter is under the loving care of the helper, as domestic servants are called, and the masters will hardly spend time with them (a treatment similar to that given to their kids).

At the same time there are many, so many cases of true dog lovers that are beyond the capacity of our imagination.

The southern area of Hong Kong island, between Repulse Bay and Stanley, is the place where you can witness a bizarrely unusual spectacle.

Small dogs adorned like movie stars, with brilliant tassels and fitted clothes (with a dog carrying case rigorously matching the little dress); mid-sized dogs pushed in carraiges wearing sunglasses and tiny hats on very hot days; Bernese Shepherds and Saint Bernards gasping for air, incapable of adapting to such a hostile climate, but sporting a flask around their necks (perhaps to be used in case of a freeze or avalanche…); at seaside restaurants you’ll see them seated on a type of little chairs, eating their Sunday meal, sharing their sticks with their master, unarguably proud of the training imparted to their beloved and trusted companion.

Stores with the latest accessories, true food boutiques with seasonal delicacies that would make any human salivate (even frozen products made for dogs – no need to specify that all products are organic and from controlled suppliers), and beauty salons full of mirrors (for the vain ones?) with connected well-being centers offering anti-stress massages are popping up everywhere in residential areas.

If you’re paying attention, the typical owner is often young and part of a couple: few families with children excluding Westerners. Then the doubt that the with the arrival of children, the faithful beast will be entrusted to the service personnel becomes more real. With what you see going around, you can bet that man’s best friend can’t wait until the family expands to be liberated from this form of obligation and unasked for anthropomorphization!