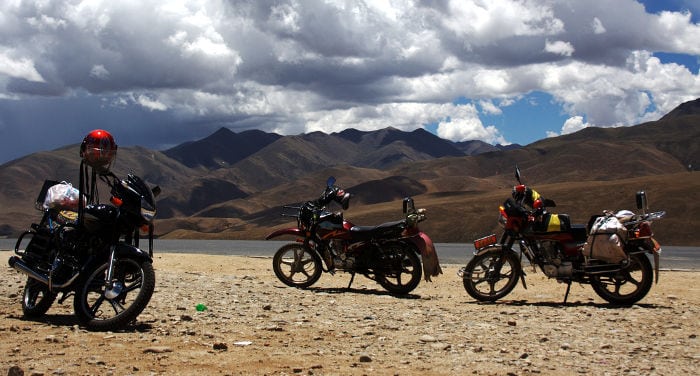 This article was written by Based Bachelor.

In Tim Ferriss’s new book “Tools of Titans”, he writes about the joys of vagabonding. Many people talk about one day leaving their normalized stations in life to see the world, but don’t. He recalls the time he’d first heard a line from Oliver Stone’s film “Wall Street,” where Charlie Sheen’s character—a promising big shot in the stock market—tells his girlfriend:

“I think if I can make a bundle of cash before I’m 30 and get out of this racket,” he says, “I’ll be able to ride my motorcycle across China.”

What was most staggering about this stated goal is it wouldn’t require that much money to achieve. It was passed off as such an impossible dream, and I imagine most Western audiences watching the film believed this to be the case.

Because of “Wall Street,” this romantic idea of “riding a motorcycle across China” is something I’ve also heard expressed as a dream from other expats — some of whom are already living in the country.

I hadn’t realized the source was a movie at the time, but now I know where it came from. It’s as though some of us don’t know how to create our own fantasies and have to rely on sound bites from popular media for inspiration.

While I can see the sense of adventure in riding a motorcycle across a developing country, China is probably the last place I would ever want to mount up.

Why? Social norms surrounding traffic laws often seem to be open to personal interpretation. You take big risks by going out on the road unprotected. And how would you like to end up with your leg snapped backward, explaining to a farmer in broken Mandarin that you need medical attention?

While riding a motorcycle across China isn’t necessarily cost prohibitive, it is legally prohibited in most areas. While some outsiders may have the perception that China is like the Wild West where you can do what you please — in most major cities, if not all, motorcycles are illegal.

The popular excuse is that motorcycles are responsible for too many accidents. This makes sense out of context, especially to people who haven’t seen the reality of traffic of China. But then, if the local government cared so much about accidents, you would probably expect to see more enforcement.

Cars and pedestrians and e-bikes collide frequently. With the constant distraction of smartphones, these kinds of incidents are common. So to say that accidents rank high on the state’s list of priorities are disingenuous.

Other possible explanations include thieves swooping by and scooping valuables out of the hands of bystanders. While there are some rather talented pick-pockets and purse-snatchers in the country, this is also probably not true.

The real reason that motorcycles are outlawed in Chinese cities is that they’re associated with poverty. Having them zooming around on public roads makes cosmopolitan areas appear less auspicious in the eyes of the locals. This disgust with motorcycles may seem weird at first to foreigners, but you might not have seen the way they’re used in the Middle Kingdom.

Have you ever seen one motorcycle carrying a family of seven? Ever seen them welded to carts dragging around unmoored construction materials? Ever seen them recklessly swooping through crowds of pedestrians at high speeds?

Not an attractive sight. Face culture has determined policy in this case.

While motorcycles are a passion in the West, purchased by enthusiasts and hobbyists, in China they’re seen as nothing more than a cheap transportation option for the poor. So attempts to ban them have essentially been a classist policy against the have-nots.

What is also unfortunate about this development is that in many ways, China still isn’t developed enough to support their car-owning middle class. Many roads are too narrow. Cities lack sufficient parking areas. Congested highways become gridlocked in a hurry. Disregard for traffic laws and other drivers only exacerbates the problem, when everyone impatiently tries to pass everyone else.

Coming from the U.S., one of the refreshing things about living in China was being able to live without the complete reliance on a car. Cities are planned a way that’s more conducive to being able to get to what you need to be on foot, if necessary. Modernized public transportation solutions like subway systems also help to relieve this burden.

Law Enforcement and Shades of Gray

One reaction from some China expats after reading this article may be that they’ve seen motorcycle taxis in cities. Yes, there is selective enforcement for the people with the correct local hukou (residency registration).

You often see them wearing brightly-colored hard hats on the side of the road. Employing their services has saved me more than once from being late back to my job. But for regular civilians, motorcycles are forbidden.

Enforcing a ban on motorbikes has also opened a can of legislative worms. They didn’t want them on the road because they make cities look poor. Accepting the rules, locals simply buy the cheaper and more environmentally-friendly alternatives: electric bikes and scooters.

These look just as bad and have also proven to be a nuisance. At times, it is very troublesome to get across the road with the swarms and swarms of e-bikes going in every which direction.

Observing this, they have started discussing whether they should ban electric bikes too. But what about the smaller bicycles with the tiny electric motors? Will it be worth their time to ban those too? Will that mean they will also have to ban bicycles?

The ambiguity surrounding different modes of transportation has put their decision-making into an indecisive gray area.

Does all this mean your dreams of riding a motorcycle across China are dashed?

Not necessarily. If you are cautious, riding outside of urban centers and in certain regions of the country, cops may simply turn a blind eye.

And look on the bright side, motorcycles are cheap. You can grab yourself a Honda knockoff in the mainland for little more than 2,000 Yuan If this is something that you’ve always wanted to do, you can. There should be nothing stopping you from heading out on the undeveloped road.

I hope it’s everything you ever dreamed of.