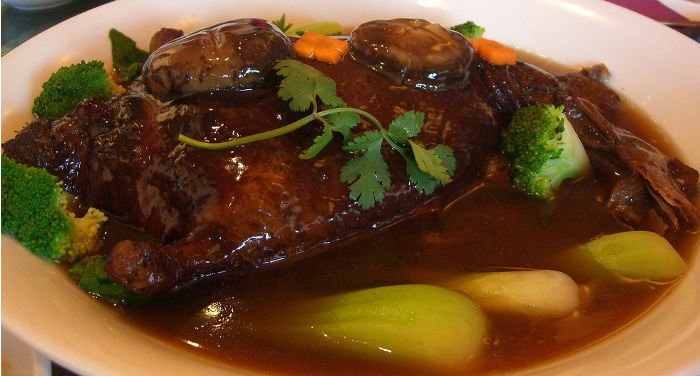 This article was written by Tina Guo.

The abbreviated form of Shanghai is 沪 (hù); hence Shanghai Cuisine is also called Hu Cuisine. In the recent history, Shanghai Cuisine has been regarded as a famous school of the traditional Han culinary culture in the regions south of the Yangtze River.

Formation and Characteristics of Shanghai Cuisine

Therefore, in the early 20th century, various Western cuisines were introduced to Shanghai. Then, the catering trade developed rapidly. Various local schools of Chinese cuisine, especially the schools of South China, vied with each other for good lots and customers, which provided conditions for Shanghai to adopt the advantages of other schools of cuisine.

Between the end of the Qing Dynasty and the early times of the Republic of China, a large number of restaurants serving 11 kinds of local schools of cuisine ran business in Shanghai, among which those who served foods of Suzhou and Wuxi cuisine ranked first in number.

Since the 1980s，great changes have taken place in Shanghai’s catering trade, and all kinds of schools of Chinese cuisine have flourished in Shanghai. At the end of the last century, the restaurants in Shanghai totaled over 30,000, including more than 650 restaurants serving different foreign food from over 40 countries and regions. Now Shanghai is regarded as one of the most famous food paradises.

In Shanghai, tourists can taste delicacies from all parts of China, as well as dishes and snacks of all the other countries in the world.

Today, Japanese, Korean, Italian and French restaurants, Kentucky and McDonald’s can be seen everywhere in the metropolis. In a word, Shanghai offers all kinds of food in the world, including French, Italian, Russian, British, German, Japanese, Korean and Vietnamese cuisines, as well as the food from South East Asia, and South America.

In Shanghai, tourists can taste the food from all the cuisines of China, such as the food of Suzhou, Wuxi, Hangzhou, Fujian cuisines and Muslims’ food. Restaurants serving the food from famous schools of Chinese cuisine can be seen everywhere.

The dishes made of high-quality edible funguses, tofu products, and seasonal vegetables in Shanghai are very delicious, such as:

Shanghai also developed many dishes of local characteristics, such as:

The ingredients of the dish include sea cucumbers (the main ingredient), and a wide variety of seasonings, such as shrimp eggs, onions, soy sauce and cooking wine. This dish is prepared through a very complex procedure. Bright black in color, this dish is soft, crisp, smooth delicious and nutritious.

Procedure: clean the main ingredients (fish maws, chicken’s gizzard, pork kidneys, sea cucumbers, pork tripe, shrimp meat, ham) and put them on a plate; place the beans and bamboo shoots on a separate plate; mix them in a pot and add the seasonings to the pot; steam the pot. Beautiful in color, this dish is delicious and nutritious. This dish is a must on the dinner table on New Year’s Eve of the lunar calendar, symbolizing family reunion.

Procedure: slice open the back of the duck and remove the innards; cut off the duck’s feet; place the duck in a pot of boiled water for a little while then take it out and clean it; apply soy sauce, Yellow Rice Wine, white sugar and other seasonings to the duck; place the duck in a bowl with its belly facing up; cut the ham, bamboo shoot, dried scallop, and shiitake into small pieces; soak the glutinous rice with water, and steam the rice; stir-fry the ginger and spring onion in a pan before adding cooking wine; put the pieces of the shiitake, bamboo shoot, ham, chestnut, dried scallop, chicken in the pan; add soy sauce, and white sugar; mix the steamed rice with the ingredients in the pan and stuff the duck with the mixture; seal the bowl with cellophane; steam the duck until it is well done.

As a traditional dish of Shanghai, this dish had been designated a delicacy of the Imperial Palace as early as during the reign of the Qianlong Emperor.

Procedure: Clean the internal organs of the pig listed above; put them into a jar together with hams and sliced bamboo shoots; add some distillers’ grain, salt, meat broth and other seasonings, and steam it.

It is rumored that this dish was invented by a woman in the rural areas of the Jiading District in Shanghai. The dish is full of the characteristics of the countryside in South China.

Shanghai serves a wide variety of Chinese and foreign snacks and is well known in the world for its meticulously prepared snacks. The famous local traditional snacks include:

The main ingredients of the snack are wheat flour, pork, Broccoli leaves, sesame oil, ginger, and spring onion. One can add crab meat, peeled shrimp, or other ingredients to the filling.

This snack is the most famous snack in Shanghai. It is said that the snack was invented by a pastry shop owner named Huang Mingxian in Nanxiang town in the Jiading District of Shanghai. Invented in 1871, this snack has withstood a hundred years of vicissitudes.

Procedure: Prepare the middle section of a lotus root; pour glutinous rice that has been soaked into the lotus root; braise the lotus root; cut the cooked lotus root into pieces; add osmanthus flowers preserved with sugar before serving it.

Noodles with Gravy Made of Dried Shrimps and Onion Oil, or 开洋葱油面（kāi yang cōng yóu miàn）

Shanghai Town God Temple is a special place serving all kinds of snacks in China and has enjoyed the reputation of being the “Kingdom of Snacks,” where tourists can taste over 200 kinds of snacks, including 40 varieties of famous snacks.

Tina majored in Chinese literature and graduated from Beijing normal university. She has been teaching the Chinese language to foreigners for 15 years. At present, she is an experienced Chinese language teacher at CCHATTY. Click here to start learning Chinese online with Tina.