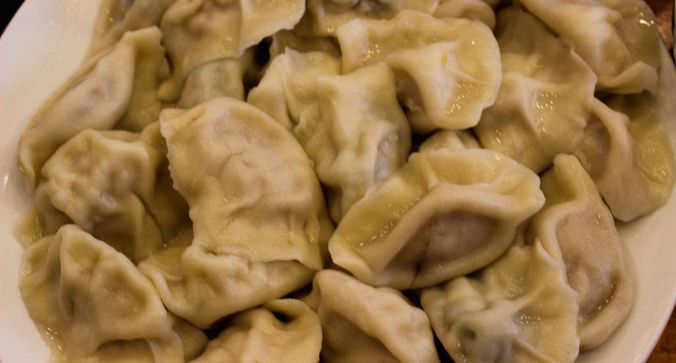 After pollution and shitty internet connection, I think the most common complaint among the expats living in China is:

“Since I’m in China I became so fat.”

It doesn’t surprise me. Most of expats tend to settle for a diet based on Jiaozi (Chinese dumplings), Lanzhou Lamian (delicious Muslim noodles) and deep fried pork meat. Not exactly the best for losing weight.

So I decided that my New Year resolution was to lose at least 6-7 Kg. I was lucky enough to stumble upon a book that challenged all my beliefs on food and diet. The book is quite famous, it’s called “Four Hour Body” and was written by Tim Ferriss.

Not only I lost 10 Kg of fat in about 3 months, I also gained 5-6 Kg of muscles and I’ve been able to stay fit for the following three years (which I mostly spent in China), that is up to today. 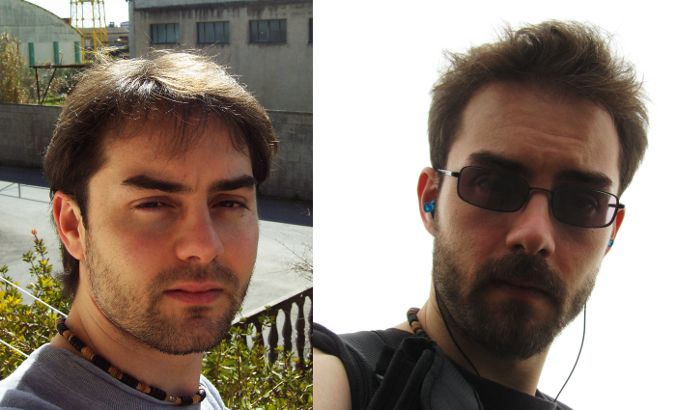 Three months after I weighed 68.5 Kg, the circumference of my chest was 87 cm, the one of my abdomen 82 cm and the one of my hips 86 cm. Always with the help of the photos on the book, I estimated my body fat percentage to be about 10%, that 6.85 Kg of fat.

Even if I only my net loss was 5.5 Kg, the change on the diet and a bit of gym – not much actually – helped me to grow about 5 Kg of muscles.

Also, the total circumference I was tracking (chest + abdomen + hips) decreased from 273 to 255 cm, that is about the 8%. This data is, in my opinion, much more impressive than the weight loss because I’m basically saying that I became one tenth thinner than I was.

Today 27 January 2014 I have no idea about my weight (I don’t think weight is important because if you grow muscles your weight increases even if you lose fat; the important is to keep a low ratio fat/muscles). However I still carry around a measuring tape, so I can tell you that today the circumference of my chest is 87 cm, the one of my abdomen 77 cm and the one of my hips 83 cm, that is a total of 247 cm, 10% less than three years ago.

Most important, during the last three years I’ve never felt hungry or craved any food (nor I did much gym). And this is the main reason for which I don’t really considered what I did to be a diet; instead, it’s a lifestyle that you can adopt in the long term (so that you don’t become fat again after you finish your diet).

Keep reading to find out:

Why you shouldn’t follow a diet that is too strict

For what I saw only few people can handle such a strict diet for more than one or two months. Most of people will lose a couple of Kg – mostly water – before their motivation burns out and they get fatter than before to start the diet.

Another problems with such a strict diet is that your metabolism will slow down because of the drastic calories cut. If your metabolism slows down your body will consume less calories overall, thus you’ll have to eat less and less in order to keep a negative calories balance and then lose weight.

It’s a downwards spiral that you can’t sustain in the long term. Further, it goes against the principles of an healthy lifestyle that, beside weight loss, guarantees you more energy and a physical and psychological well-being.

How can you reach a trade-off between weight loss and long term sustainability? 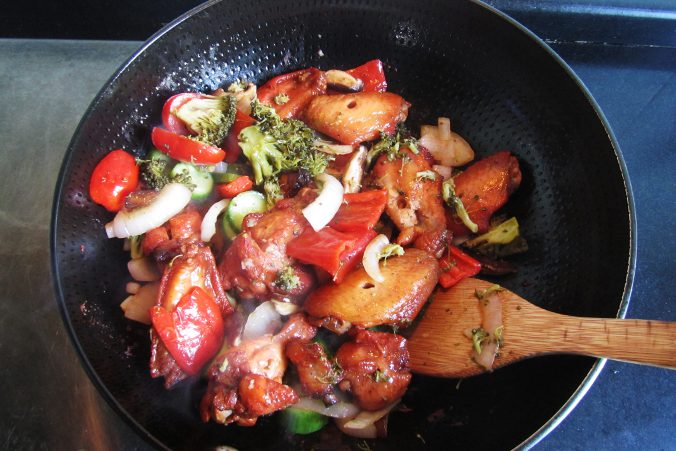 How I lost 10 Kg: The low carb diet with cheat day

Here the solution proposed by Four Hour Body. Actually I have no idea whether Tim Ferriss invented it or just made it famous. And I don’t really care. My point is that it works!

Basically you have to follow the Dukan Diet six days per week while the seventh day (cheat day) you can eat and drink anything you want. Yes, you’re allowed to eat and drink like a pig: dumplings, noodles, junk food, chocolate, Tsingdao beer, baijiu, and whatever else crosses your mind. 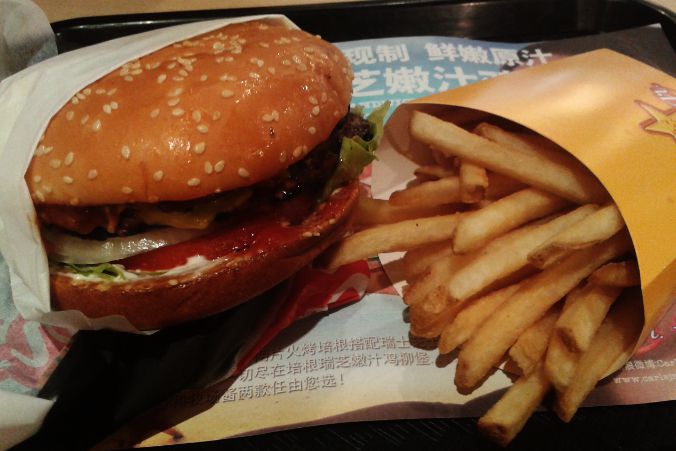 In Hangzhou every Friday (I always chose Friday as my cheat day) I used to have lunch at Pizza Hut and eat pizza – a better one – also for dinner. In Shanghai I’d rather had lunch at Carl’s on Nanjing West Road (see photo above) and a random dinner filled with carbs (could be thirty jiaozi, noodles and lamb meat pie at the Xinjiang restaurant or a giant pizza in an Italian restaurant).

If you follow the diet six days per week, the cheat day will provide too important advantages to you:

Beside the cheat day, you can also eat white carbs (pizza, rice, potatoes) just after your workout. Just keep in mind that it’s only work if you did an intense work out (30 minutes of weight lifting, for instance). If you go for a walk you aren’t allowed to eat white carbs (unless it’s your cheat day). 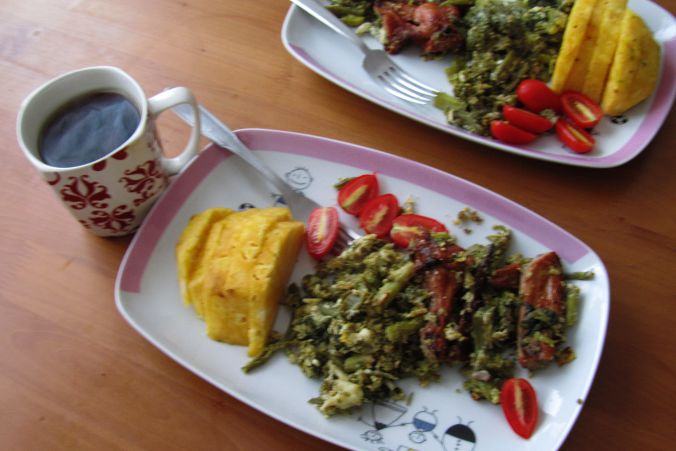 My breakfast… you shall avoid fruit at the beginning though.

People that fail usually have too common problems. First:

“What will I eat for breakfast?”

Personally I spent two years eating eggs, broccoli and green beans. I used to boil the vegetables on a Chinese rice cooker (filled with a bit of water) the night before and then cook a scramble egg on a Chinese wok together with the vegetables, garlic, red peppers and a drop of olive oil.

However I understand that not everybody will be willing to cook every morning. In this case a boiled egg and some almonds will do the trick.

If you keep telling to yourself that you need sweet food on the morning it’s probably because you never tried anything different: even if I’ve been eating cereals with milk for most of my life I had no problems to switch to eggs and vegetables. Just try it… you may actually like it!

The other common problem among people that start this diet is that they always feel hungry. This is due to the fact that you aren’t eating enough calories.

Let’s put it this way: a portion of rice contains about 500 calories while a portion of lettuce contains 50 calories. It’s clear that if you cut the white carbs (rice, potatoes and so on) you can’t substitute it with a half lettuce. You need to get your daily calories intake somewhere else!

And you can’t certainty eat then lettuces neither. The key is to eat more legumes (beans, lentils and chickpeas) and almonds because they contain a lot of calories but, at the same time, they don’t contain highly refined carbs such as white rice or pasta (check Four Hour Body to understand why refined carbs make you fat as this article is already long enough and I don’t want to write a book chapter). 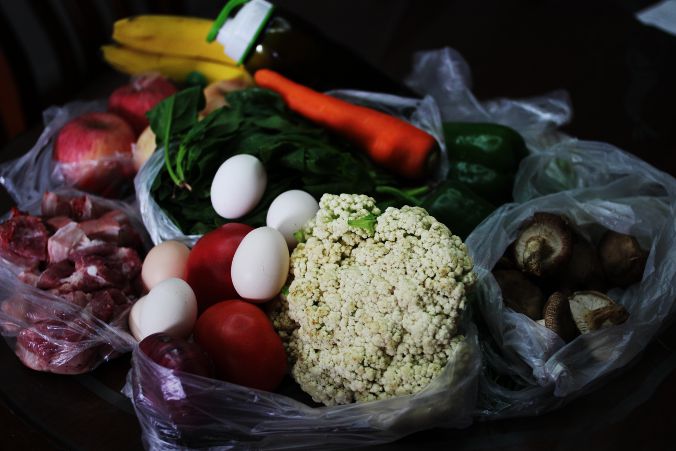 I used to buy ALL my food at the local market: as you see it’s all raw food, there is no processed food.

Many people aren’t used to eat out too often in their countries because restaurants are expensive in the West. Than they arrive to China and discover that they can have a plate of dumplings or noodles for about 2 USD. And they start to eat it way too often (in 2010 I was literally addicted of Lanzhou lamian and jiaozi)

Also, while almonds and beans aren’t an issue as you can find them in pretty much any shop, lentils and chickpeas are much more rare in China. Being them my favorite legumes, this has been a major problem for me. I solved it in two ways: bringing kilos of legumes every time I traveled outside China (I remember once I brought five Kg of chickpeas from Colombia) and buying already cooked legumes at City Shop (a chain that mostly sell overpriced imported food).

Finally it’s a fact that most of the meat and fish that you find in China has no taste whatsoever. Since I’m in Thailand I only eat meat, fish and vegetables. But in China? I just couldn’t eat the fish (beside maybe some Sichuan dish) and I reduced the amount of meat because I didn’t like it.

If you combine these three factors (cheap carbs, awful fish and meat and limited availability of legumes), you can see how difficult it becomes to be to respect the diet in China.

How did I solve the problem?

I ate much more vegetables, almonds and eggs (no, eggs aren’t dangerous, processed food and lack of exercise is dangerous). Also, I learned several recipes to cook beans in order to avoid boredom.

While eating out, I’d choose restaurants that have decent meat and vegetables such as Henan, Sichuan, Xinjiang, Korean or Japanese (instead of dumplings, noodles Dongbei restaurants).

How to keep fit in the long term

Unless you want to be super slim (less than 10% of body fat), after you lose the 5, 10 or 20 Kg you wanted to lose you can relax the diet. Why? Because now your goal isn’t to keep losing weight. You just want to avoid to gain weight again.

Here my experience: fruit isn’t a problem. Even if contains sugar it won’t make you fat. And I don’t cook anymore for breakfast. Instead, I eat a banana and a yogurt. Also, I eat white carbs 4/5 times per week. However I don’t do any cheat day anymore and I don’t eat any processed food (beside bread, pizza, pasta and, sometimes, french fries). This means that I don’t it any biscuits or other industrial food. It’s poison and I don’t miss that shit.

Did I gained my Kg back when I relaxed my diet? As I explained in the first part of this article, not at all!

If you want to know the other benefits of a low carb diet, why eating white carbs is bad for you, why to track your result it’s so important for succeed and what are the best exercises to lose weight fast then I recommend you to check Four Hour Body.