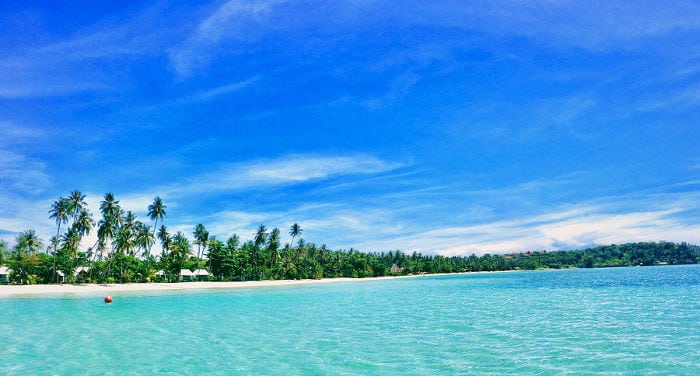 Koh Mak is a spectacular paradise island, with a surface area of a little more than 16 square kilometers, located in the southeastern part of Thailand, next to the Cambodian coast.

Even though it has wonderful beaches and almost untouched tropical vegetation, Koh Mak is an island that’s barely known to international tourists. This is actually what makes it a great place for those looking for a relaxing vacation far from the mass tourism so prevalent in places like Phuket or Pattaya.

Its privileged geographical position also makes it quite appealing to all those staying near the island of Koh Chang.

The primary reason why Koh Mak can still be considered an almost untouched island in 2018 is that the families that own it have always steered politics toward its preservation.

The first bungalows designed for international tourism had already been introduced in the 70’s, though the first tourists only came to the island starting in the late 80’s.

History says that the island was discovered many years ago by a Chinese official, Chao Sua Seng, during the reign of King Rama V, in the second half of the nineteenth century. Today Koh Mak is famous to the Thai people for its cultivation of coconuts.

When the Prompakdee family bought the island from Chao Sua Seng and first moved there, in order to feed their 11 children, both husband and wife decided to created an actual crop of coconut palms.

Over time this activity was also bolstered by the sale of wood taken from the mangroves and sold in the capital Bangkok.

How to get to Koh Mak

Koh Mak is easily reachable from both Bangkok and the nearby island of Koh Chang.

If you land at Suvarnabhumi Airport, you have three choices available: the first is to buy a minivan ticket for one heading to the port of Trat for a little less than 300 THB a person. The second is to take a bus line. You can choose those that go directly to the port of Trat; there are only two: the first leaves as 8:15 in the morning, while the other leaves two hours later.

If instead you’re in the middle of the city, you can take a bus from Ekkamai Station, located in the western part of Bangkok, adjacent to the BTS stop of the same name. It takes around 5 hours and a ticket will cost around 250 THB.

Once you get to the bus station in Trat, you can use a taxi service to bring you to the port. A ticket costs 80 THB a person and takes a half hour.

From the port of Trat, there are departures of both small boats (called speedboats), and a ferry (which is really an old fishing boat converted into a tourist ferry). The price for the ferry is 200 THB a person, while tickets for the speedboats start at 400 THB a person.

Nevertheless, the amount of time it takes differs greatly depending on which type of boat you take: 45 minutes of travel with the smaller boats, over 3 hours by ferry.

From Bangkok you can also get to Trat by air with Bangkok Airways. There’s a maximum of 3 flights a day during the high season. The trip lasts an hour and a one-way ticket starts from 2,850 THB a person.

A speedboat ticket going to Koh Mak costs 600 THB a person (one way); the boat will drop you off at the beach of your choice. Some companies recommend booking online, especially in the high season.

Where to stay on Koh Mak

Bungalows are the masters of the island. Recently there have been some seaside resorts built, such as the Koh Mak Resort (located on Ao Soun Yai Beach), the Mira Montra (which faces the same beach as the Koh Mak Resort and prices per night start at 5,900 THB), or the Prompakdee (reviewed as the best resort on the island by Booking.com), just to mention the three most popular ones.

Click here to read our advice on how to book a hotel in Thailand.

Where to eat on Koh Mak

Most of the restaurants on the island serve Thai food. Some of the most famous are Koh Mak Seafood (specializing in fish), located at the port of Ao Nid; and Table Tales (which offer the usual Thai dishes like papaya salad and pad thai), which faces the southwestern coast.

For those who have to eat international cuisine, you can visit Koh Mak Pizza or Swiss Sawadee, a Swiss restaurant offering bratwurst, cordon bleu, and spaetzle. For fans of French food there’s also Chic and Chill, in the south of the island.

How to get around Koh Mak

The best ways of getting around the island are by scooter and bicycle. The fact that the highest point on Koh Mak only reaches a height of 150 meters above sea level also makes the entire island easily crossable by foot. Recently, some trekking routes have been built specifically for that reason.

Koh Mak can be defined as an ecologically sustainable island. The few cars you’ll see belong to local inhabitants or are part of the taxi service that takes tourists to the resorts or various beaches.

The two most important beaches, which also host the majority of accommodations, are Ao Kao (in the southwest of the island) and Ao Soun Yai (on the northwest coast).

On the southern part of the island there’s Ao Kra Tueng (and the already cited Ao Kao, considered to be the most popular beach on Koh Mak).

What to do on Koh Mak

The main activities are mostly tied to nature.

Snorkeling and diving: one of the best known schools on Koh Mak is Kho Mak Divers, run by a Dutch family. Their tours are centered around the Koh Chang National Marine Park, a protected area made up of a good 52 islands (among which is Koh Mak), where you can admire more than 40 different types of corals.

Prices start at 790 THB for a day of snorkeling, to a maximum of 11,250 THB for 5 days with 2 dives a day. Koh Mak Divers also offers the opportunity to become a dive instructor by taking the appropriate courses.

Another water-based activity is kayaking. You can’t use jet skis; they were banned by the owners of the island because they damage the environment.

Cooking lessons: whether you’re an expert cook or just fascinated by Thai cuisine, one way to get to know the Thai culture better is to try out the flavors of the local food. If this option interests you, take a look at the offerings of Smile Koh Mak Thai Cooking School. Unlike schools located on larger islands, this school offers the chance to take nearly personalized courses; in fact there’s a maximum number of 4 participants.

In the southeastern part of Koh Mak you can also visit a Buddhist temple, the main religious center for the local community.

The Koh Mak Museum is located inside a little wooden house that goes back nearly 100 years. Inside the museum you can find objects belonging to the “founding” families of the island. A visit takes about 30 minutes and you can do so with one of the descendants of Lugan Prompakdee, Mr. Khun Tarin. Entrance to the museum is free.

If you’re also interested in visiting what’s around Koh Mak, you can take day tours to Koh Kood Island, and also the private islands of Koh Kham, Koh Rayang and Koh Kradat.

A distinction of Koh Mak are the works of local artist Khun Somchai, which are mostly representations of nude female bodies. These statues can be found in different parts of the island as well as the Koh Mak Resort.

Even though credit card payment is accepted in the larger resorts, there are no ATMs on Koh Mak. Plan your expenses well and always bring cash with you since the closest ATM is on the island of Koh Chang!

On Koh Mak there is just one medical center, which mainly deals with basic medications. The closest hospitals are in Trat and Koh Chang.

A problem that many tourists encounter on Koh Mak are sand flies. Since the island’s beaches aren’t treated chemically, these insects (which can be very bothersome) proliferate. Sadly there’s no repellent capable of keeping them away. A trick used by the local population is coconut oil, which keeps the flies from penetrating the skin and creates a very strong itch.