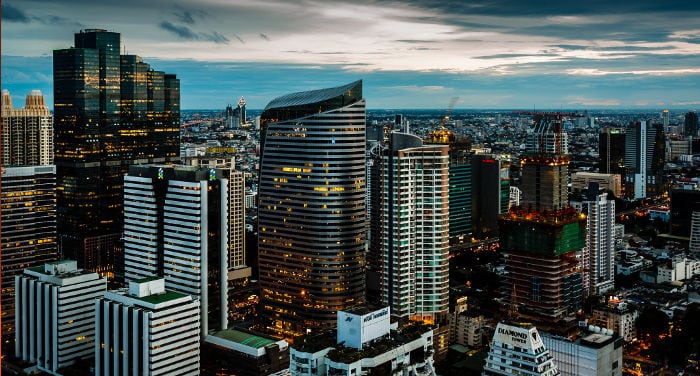 Cost of Living in Thailand – Index

If you’re thinking about moving to Thailand, even for a short time, this article will be very useful for managing your money and creating a personal “living cost plan”.

As you can imagine the main monthly expenses are similar to those in the West with a few small exceptions.

In this article, we’ll cover both the obligatory expenses that you can’t avoid and the extra ones for everything you need to know when you step foot on Thai soil.

To these costs there’s also the cost of a visa which will vary according to the type whether a student visa, work visa, retirement visa, or tourist visa.

Living costs of Bangkok vs the rest of Thailand

Bangkok is the capital and commercial hub of Thailand, not strangely, both salaries and living costs are higher here. According to the NESDC (Office of the National Economic and Social Development Council), Thailand had a GDP per capita of USD 5,390 in 2019.

Bangkok, on the other hand, had a GDP per capita of USD 13,383 as early as 2008, according to PriceWaterHouseCoopers. That’s more than twice as much a decade earlier and something that can be reflected in the capital’s living costs.

With that said, Bangkok is still comparatively cheap, at least when compared to places like Singapore, Hong Kong, Tokyo, Seoul, and Shanghai. Food is affordable and foreigners can enjoy eating out daily.

Your monthly budget will be divided between mandatory expenses and optional ones, The first category includes expenses such as:

The second category is made up of various extras like:

How much does rent cost in Bangkok?

As explained in this article, the first thing to do upon arriving in Bangkok is to look for a place to stay.

The cost of an apartment will have the greatest impact on your available monthly budget; for this reason, and since leases in the Thai capital start at a minimum stay of 6 months, it is important to find a place that suits your needs (financially and otherwise).

The cost of real estate in Thailand, especially in Bangkok, has greatly increased in recent years, both for rentals and for buyers.

If instead, you’re looking for something a little more comfortable, where you can also have a working kitchen, livable den and a separate bedroom, mid-range condominiums come in at around 14,000 – 40,000 THB, or about 400 – 1.200 USD a month.

The last category would be the so-called luxury apartments, or condominiums inhabited by expats with a higher income. Rents, in this case, start from 50,000 THB and can surpass 150,000 THB (for a 5 room apartment in the Asoke area, for example), covering a range of prices between 1,500 to 4,500 USD and more.

Obviously the prices just listed refer to properties in the city center, If you’re willing to consider apartments that are located about an hour by bus from Bangkok (an example are the condos located in the nearby city of Pathumthani), then a two-room apartment can even cost just 100 USD a month.

Note that in Thailand you’ll need a deposit – or down payment – equal to two months’ rent, and advance payment for the first month’s rent.

In addition, there are also auxiliary expenses to consider, such as:

How much does rent cost in other cities compared to Bangkok?

So, we’ve tapped into the real estate market and by now you probably understand that Bangkok is the most expensive city to acquire property in Thailand. Below you can see a comparison of the rents in Bangkok with other popular cities in Thailand, including Phuket, Chiang Mai, and Pattaya.

Depending on the area you go to, you’ll find these types of supermarkets:

Naturally locally grown products cost less than imported goods which often have exorbitant prices due to the very high importation taxes imposed by the Thai government.

Regarding your monthly budget expenses, if you avoid too many imported goods it should be around 200 – 300 USD.

Cost of transportation in Bangkok

Monthly transportation expenses shouldn’t weigh all that heavily on your budget, especially if you live in the city center and near a stop on the SkyTrain, or subway, in Bangkok. Let us review the transportation costs in Bangkok and other Thai cities.

The BTS is only available in Bangkok, thus, in other cities, you get around by bike, car, or taxi. Ticket costs for this elevated train that can get you around the city vary according to the length of your trip.

You can also get a daily ticket for about 130 THB (about 3 USD), which will allow you to use the train for the entire day.

If you’ll use the Sky Train a lot, then you can also get a ticket for more rides (the minimum is 15 rides, the maximum is 50). The more rides you buy, the lower the cost per ride goes.

The subway costs less than the Sky Train, and you can also buy tickets for more than one ride.

Buses and minivans in Bangkok

There are loads of buses and minivans that transport thousands of passengers a day around the capital. Speaking specifically about buses, there are at least two distinct types:

From the centrally located “Victory Monument” circle, there are also minivans that head out toward nearby cities and the seaports that connect the mainland to the islands.

Prices depend on the distance to the destination but are still rather low; for example the Bangkok – Pattaya minibus, which takes about 2 hours, costs 90 THB.

Another form of transport used by the locals is by boat. This is a cheap and convenient option, especially in peak hours where traffic makes getting around the city center nearly impossible. Prices are equivalent to the buses.

The so-called “taxi – meter” (or metered taxis) in Thailand starts at around 35 THB. In general, taxis are quite cheap. For example, a taxi ride from Asoke to Jatu Jak market (about 7 kilometers), costs about 3 USD.

Taxi scooters are more expensive (about 2 USD a kilometer). Let’s not even talk about the tuk-tuks, which can ask as much as 10-20 USD for a ride of a few kilometers, especially in the touristy areas.

Cost of Transportation in Other Thai Cities

Other Thai cities don’t have a subway or SkyTrain, thus, you have to get around by foot, bicycle, moped, taxi, or similar. Below I’ve listed the different traveling options and the costs associated with each:

Songthaew is the preferred option among locals in Chiang Mai but also among many tourists. These can typically be found in Chiang Mai. While Chiang Mai isn’t that hot so it’s not really an issue to spend some time in one of those.

You can travel for as little as THB 30 during day time, it might be a bit more expensive at night. Keep in mind to ask for the price before you jump on the songthaew to avoid discussions later. Besides, you can reach practically any part of the city if you don’t mind sharing the ride with fellow passengers that jump on and off during the ride.

Due to the large amounts of songthaews in Chiang Mai, at least taxis are not as frequently seen but can primarily be found at airports, bus stations, hotels, and more. That said, you won’t have any problems finding taxis in any of the cities, including Hua Hin, Phuket, and Pattaya.

Taxis generally cost THB 100 – 200 so this option is indeed more expensive than the songthaew.

Grab is the biggest taxi-hailing application in Southeast Asia and it’s one of the most popular options among travelers and residents in Thai cities. The benefit of using Grab is that you choose your pick up location and end destination before the driver arrives.

Thus, there’s no risk that he or she will scam you or take a detour. Besides, you won’t have to tell or show the address to the driver as you’ve already input the address prior to the pickup. Before you visit Thailand, be sure to download Grab.

As the price is settled according to supply and demand it can be more expensive to use Grab during rush hours or festivities like New Year.

Cost of renewing your visa

The types of visas in Thailand are many, starting with a student visa up to a visa for retirees.

What all these types of visas have in common (aside from the tourist visa) are the two following factors:

Extra costs, including trips outside Thailand

Health insurance is not obligatory in Thailand. This does not mean however that health care is free to the public as is the case in many European countries. If something happens where you need to go to the doctor or one of the hospitals throughout Bangkok, you have two options:

Let us start and review your options when eating out in Bangkok.

The number of places where you can eat in Bangkok is infinite, on “Trip Advisor” alone there are more than 9.000 restaurants.

The biggest difference is surely among restaurants serving Thai cuisine, which also includes those along the capital’s sidewalks, where a dish of pad thai (the Thai version of spaghetti … more or less!), will cost just 30 THB, depending on the ingredients.

For foreign restaurants, the costs are greatly higher, especially when you consider that all (or almost all) apply a 7% tax and 10% tip on the final bill.

Chiang Mai is indeed cheaper than Bangkok, but you won’t find as many foreign restaurants here. That said, Chiang Mai has a lot of tasty delicacies, including:

Below you can see example of costs for food in Chiang Mai:

Phuket is Thailand’s most important and popular resort destination that receives almost 10 million visitors every year. Thus, there are a bit more Western and other foreign restaurants here compared to Chiang Mai.

Below you can see example of costs for food in Phuket:

Ticket prices depend on the type of theater you choose, on Wednesdays, there’s a 50% discount, and at the MBK shopping center, you can find tickets for 120 THB. But if you decide to see a film in the VIP hall with reclining seats, buffet and popcorn included, the price rises to 500 THB.

Besides cinemas where you can see films in 4D, you can also taste a film inside the ultra-luxurious “Enigma Cinema” for a total of 3.500 THB a couple, where you’re served dinner by an honest-to-goodness butler.

Something you’ll want to do when you first get to Bangkok is to visit various Buddhist temples situated in the ancient part of the capital. The cost for these cultural places is rather low; 100 THB to visit the reclining Buddha and 500 THB to visit the royal palace.

Some temples are actually completely free, such as the Gold Mountain, a temple where you can admire Bangkok from above in all its splendor.

In conclusion, we can certainly dispel the myth that you can live in Thailand for 300 USD a month; a possible option for a Thai, but definitely not for a foreigner.

A minimum budget to have when you leave your country to live in Thailand will be between 800 – 1,000 USD a month.

This figure is for a single person’s lifestyle who works and has a more or less “normal” life; but if you’re thinking about traveling intensively or living in luxury, your budget will go up as well!