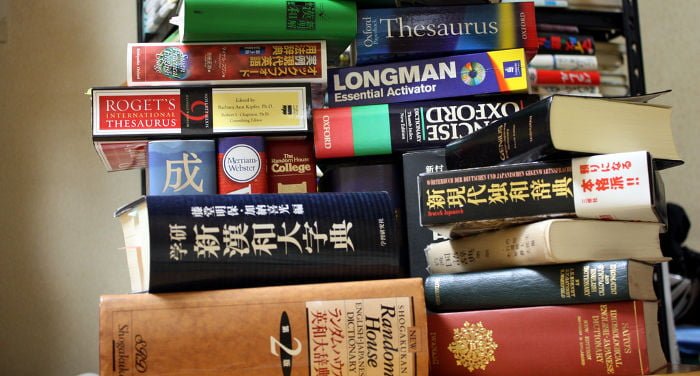 Which are the best Chinese language dictionaries? What type of dictionaries are available? How do you use them? If you’ve ever asked any of these questions, this article is for you!

Why learn how to use a Chinese paper dictionary?

We’ll speak about Chinese paper dictionaries, an indispensable tool for those learning Chinese (at least at university, where cell phones and computers aren’t allowed in classes or exams). The list we’re proposing is certainly not complete, but represents a good start for starting to understand something or have an idea about which tool is best for you and your study.

Once a staple until a few years ago, lately the paper dictionary is an increasingly less-used tool in favor of digital dictionaries (electronic dictionaries, online sites, specific software, pdf/ebook dictionaries and cellphone apps).

So why should you learn how to use one? There are two basic reasons, one of a practical nature and the other, theoretical so to speak.

First of all, those who study Chinese at university will already know this: you’re not allowed to use cell phones and tablets during exams, and as a result, a paper dictionary is the only option. Alternately, there are lots of electronic dictionaries that contain one or more paper dictionaries in digital format, which could be allowed by the teacher.

On the other hand, knowing how to use a Chinese paper dictionary presupposes a knowledge of the structure of characters that can’t be neglected by those who study the language, which I will try to explain in the simplest way possible.

There are lots of types of dictionaries, many more than you might imagine; usually starting with those that are bi-lingual (English-Chinese), that everyone has used when they started learning Chinese, to then move on to monolingual dictionaries (completely in Chinese), which are divided into dictionaries of words 词典 (cídiǎn) and dictionaries of characters 字典 (zìdiǎn).

The former (词典) gather all words, contain one character words as well as those with two or more syllables, while the latter (字典) concentrate on individual characters.

How do you look up words in a Chinese dictionary?

The dictionaries you’ll use at the beginning are those of words 词典 (cídiǎn); the system for looking up words in a dictionary is a little more complex that our own dictionaries. Chinese dictionaries are in fact organized by radicals, number of strokes, and lastly by alphabetic order.

This means that to find a character in a dictionary, there are more steps you’ll have to take, which I’ll try to explain step by step. You could also get yourself a dictionary and follow the instructions a little at a time, if you’ve never used one!

For the examples I’ll give, I used a little cheap, compact dictionaryi, which was given to me as a gift a few years ago by a dear friend, but the process is similar if not identical than those for larger, more-complete dictionaries.

Dictionaries are organized according to alphabetical order, so if you know how a word is pronounced, you can simply look it up as you would in any dictionary. Alphabetical order also follows the order of tones, so words of the first tone come first, then the second and so on, and lastly words with no tones.

Chinese characters are not phonographic, so we can’t know the pronunciation at first glance as with alphabetical languages. When we don’t know how a character is pronounced, we first need to identify the “radical” 部首 (bùshǒu) of the character, or the most important graphic component, which is usually also determined by the semantic area to which it belongs (that is, the type of word it belongs to).

Usually it is in the upper left, or the one that occupies the most space, but not necessarily (with training you’ll start to figure out the radical much more easily). Here are a few examples:

After identifying the radical, go to the table at the beginning of the dictionary where they are ordered by number of strokes, and look up the radical you’re interested in. Usually this first part occupies just a page, divided into groups that subdivided into those made up of a single stroke, 一画 (yī huà), two strokes, 二画 (èr huà), etc. Once you find the radical, there will be a reference to the number of the radical on the second list (which we’ll see in the next point).

In this case it’s important to know the correct order of writing the strokes, because otherwise you won’t find the necessary radical if you don’t know which strokes it’s made of, but in any case it’s only just one page. So if you find yourself really desperate you can look through all the radicals until you find the one you need!

You may have asked why the radical 桩 is 木 (mù), while that of 想 is 心 (xīn), even if it too contains a 木 in the upper right. This has to do with the meaning of the words, as we’ll see later on.

After finding the radical’s number in the index, we move on to the second table, which contains all the characters grouped according to the radical and the order of the strokes. Now we’ll count the number of strokes that aren’t part of the radical: each section contains characters ordered by the number of strokes and subdivided into subgroups, again called 一画 (yī huà), 二画 (èr huà) etc. Let’s go back to our examples:

Be careful: in some dictionaries, in place of the pinyin pronunciation you’ll directly find the page number where you’ll find the word you’re looking for!

Now all you have to do is to go to the page you need or follow alphabetical order to finally find our word.

Remember that to find a word made up of more characters you’ll have to start from the beginning to then follow alphabetic order and find the right word. If you don’t know the pronunciation according to the character, you can then start from the first step for the second character or just keep scrolling through the list until you find what you’re looking for. This could save you a good amount of time or, vice versa, have you lose a lot of it, so it’s worth first seeing which words start with the same character and then evaluate if it’s best to proceed.

If you’re beginning to use the dictionary for a translation, here you’ll find our advice on how to translate Chinese into English.

How to choose the paper dictionary that’s best for you

Before concluding, here’s some advice when it comes to paper dictionary:

In the first few years of learning Chinese, it’s best to use a small bilingual dictionary, preferably one in your native language – Chinese that’s not too big: at the start the number of words is limited and a smaller number of pages means a greater chance of finding the necessary words.

I myself, in a moment of desperation during an exam, flipped through the ENTIRE dictionary to find a word… finding it! Although a little old, the little yellow and blue Zanichelli by Zhao Xiuying and Franco Gatti is still very useful to me, even though an updated version exists.

Many think that the best English-Chinese dictionaries are better than the one in other languages; even if a good number of these are more complete, especially those edited in China. If you aren’t a English native speaker I don’t think it would be a wise move to trust those of a third language (obviously, except in the case that you know it well).

Again, I speak from practical experience: I saw people show up to exams with suitcases holding English-Chinese and Italian-English dictionaries, which besides adding to the weight of transportation, surely disproportionately added to the amount of time to look up a word.

On the other hand I made errors in translation because I didn’t understand a word well not in Chinese, but an English word when using a Chinese-English dictionary.

For this reason, for English-Chinese dictionaries I recommend The Chinese-English Dictionary, 汉英大词典 (Hàn-Yīng Dà Cídiǎn) by 吴光华 (Wu Guanghua), used by the majority of colleagues and teachers, which you can find in China for a really good price, or by spending a little more, in a specialized imported bookstore.

When it comes to monolingual dictionaries there’s a wide selection, especially if you’re in China. Here are some of the main Chinese dictionaries:

The 新华字典 (Xīnhuá Zìdiǎn, Dictionary Xinhua Characters) is a dictionary of characters (字典, zìdiǎn), for which there are continuously updated editions as the language evolves in China, and is also available in a compact version.

The 现代汉语词典 (Xiàndài Hànyǔ Cídiǎn, Dictionary of Modern Chinese Words) represents the standard for modern Chinese. This is a dictionary of words (词典, cídiǎn) and also exists in various versions, from pocket-size to multiple volumes.

The immense 汉语大词典 (Hànyǔ Dà Cídiǎn, Large Dictionary of Chinese Words), in 13 volumes, is the greatest work on the Chinese language, especially indispensable for those studying literature or more classical works. Any character that ever existed, unless it was invented recently, can be found here.

Lastly, the most popular specific dictionary on Classic Chinese is the 古代汉语常用字字典 (Gǔdài Hànyǔ Chángyòngzì Zìdiǎn, Dictionary of Commonly Used Characters in Classic Chinese) by 王力 (Wang Li), which is also available in a compact version.

Not all paper dictionaries must be consulted by flipping through the pages. There are various digital versions that can be downloaded on electronic dictionaries, such as plugins or apps (like Pleco or Wenlin) or simply in a pdf version that you can easily carry with you on a USB stick.

Aldo Terminiello (1989), has been writing and drawing since he was little and has done so for one year in Kunming, China where he finished his degrees in Chinese and English. The story of that year, transformed into a graphic novel, is being published on its website QinAode. He translates, illustrates and teaches English and Chinese depending on the case.