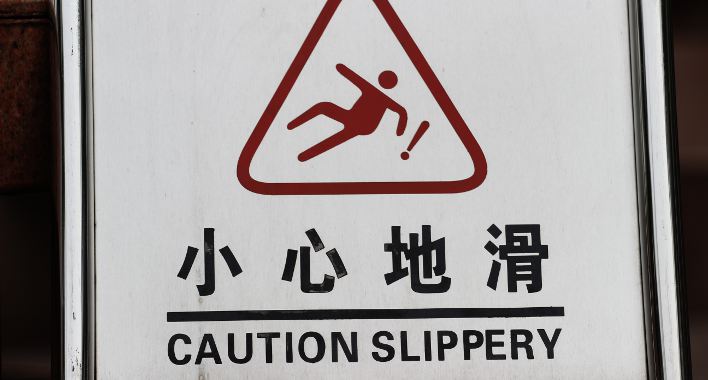 I’ve already discussed in my plan to learn Chinese how I prefer to rely on the “context” while learning a language.

This post tells how, when I started to study Mandarin again some months ago, I was able to fix forever on my mind (well let’s say till next year) four Chinese words by placing them in a well-defined context, instead of trying to learn them by endless repetition or character by character (Remember the Hanzi style).

Another point I would like to stress – always through some examples – is that learning Chinese by osmosis doesn’t work.

I know the character 雪 (xuě) means “snow,” however I have no clue about 滑!

I check the dictionary and I learn that 滑 is pronounced huá and means “to slip.” huá does not tell me anything, however “to slip” triggers on my memory the panel I see in about any public toilet, hotel hall, airport and so on: 小心地滑 (watch out to the slippy floor). Now I have a connection.

In this case, the input that triggered the connection was the meaning of 滑.

Watching again the panel in the photo I notice the word “小心,” which also represents an interesting example. 小 (small) + 心 (heart) = 小心 (be careful).

The above example is a quite common case in mandarin and shows how useless it may be to learn Chinese characters one by one while most modern Chinese words are composed of two or more characters and change meaning according to the context.

There is one of these words I hate the most. It is frustrating.

I know meaning AND pronunciation of both character: 和 (hé) means “and” and 平 (píng) means “flat.” However I have no idea about the meaning of the combination 和平!

I check the dictionary and I discover that 和平 means “peace.” ein? How I’m going to remember it?

Then I recall that the first time I came to China I slept at the 和平 Hotel and everything becomes easy: the hotel was quite close to the Confucius temple, one of most peaceful spots in Beijing.

p.s. for the “experts”, NOW I also know that one of the minor meanings of “和” is peace (if you look at the dictionary you will see that “peace” is the seventh meaning of “和”). But the people that are starting now with Mandarin cannot learn all the possible meanings of a character in a row. For them, “和” just means “and.”

If you live in China, unless you are blind and deaf you know that 中国 means “China.”

But how about 际? No idea! I check the dictionary and discover that 国际 means “international.”

Suddenly I’m sure I will never forget 国际. Why? Well, half of the Chinese hotels are called 现代国际 (Modern International, don’t ask me why!) and EVERY taxi driver asks me “国内还是国际?” EACH time he brings me to the airport.

Since 内 (nèi) means “inside,” I understand that the taxi drivers were always asking me whether I wanted to stop by the local terminal (国内 = inside the country) or the international terminal (国际 = international!).

How could I possibly forget 国际 now ?

When I saw these two characters in a sentence talking about cows and food, I got no triggers at all and I thought I did not know the characters. Then I checked the dictionary. 农夫 (nóngfū) means “farmer”. And I thought:

“Wait a minute, my bank is the Agriculture Bank of China and till now (two years) I was never able to remember neither the characters nor the pronunciation of it.”

I take the credit card out of my wallet and I read out loud “中国农业银行.” Bingo! 中国 means “China” and 银行 means “Bank”. Hence 农业 must be “Agriculture.”

Now, since 营业 means “business” (I know it because many shops in China expose their business time on the door), it’s easy to get that 农业 (agriculture) minus 业 (business) is equal to 农 (farmer), where 夫 just means “person” as for 大夫 (doctor) or 丈夫 (husband).

In this case, the trigger was my bank.

Ok, I will stop here or you will think I’m crazy.

Since I’m studying Chinese flashcards that contain sentences instead of single characters, memorizing and reviewing Chinese words became easier as most of the time I can find a quick way to relate the new information to a context.

I believe this approach is more efficient because our memory “stocks” new information by connecting it to our past experience and knowledge.

Here we are, if you are new to this blog and you want to know how I’m trying to learn Chinese, check this post.

June has been a busy month and, if I didn’t have previously committed to learning Chinese every single day, I would have probably let it go and forget I was actually studying Mandarin.

Instead, I have only slowed down the pace. Here is what I did:

So yeah, I cannot claim it was a fantastic month but I’m satisfied that I actually kept doing something.

In July I intend to: