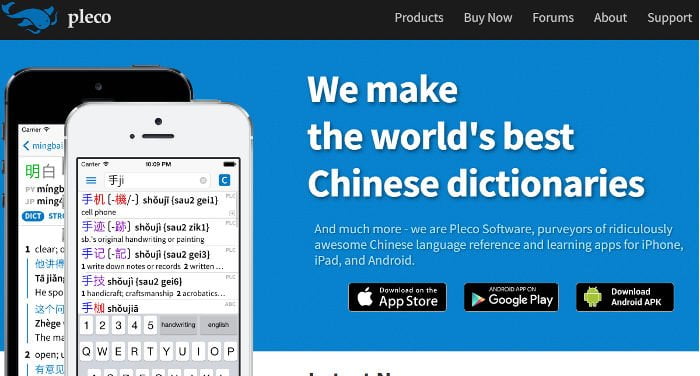 Learning Chinese has become an increasingly common objective not just for future Sinologists and experts but also for neophytes in the world of business where it has become continuously more important.

There are in fact an infinite amount of resources for how to best learn this language and facilitate learning for the user in this difficult undertaking.

These days, the quickest and most intuitive are certainly the numerous mobile apps for learning a language, and when it comes to Chinese, there’s one you probably already know.

I’m talking about Pleco, the English/Chinese dictionary for iOS systems and Android for which I’ll now present a brief review.

What does Pleco represent today?

The success of this app is the natural result of technology in our era. In the past, when starting out with a new language, the very first thing to do was to get a hard copy of a good dictionary, sometimes made up of several volumes, the heavier the better.

Later, these were replaced with pocket dictionaries that could accompany the traveler on their adventures around the world, comfortably stored in a jacket pocket or inside a backpack.

At present we are witnessing the natural passage from a paper format to a digital one. During almost any type of stay in China (for work, tourism, study, a flight stopover or anything else), Pleco is a silent friend who manages to create a small crack of light in this enormous linguistic barrier, allowing you to quickly search for characters you can’t understand or communicate, whether you already know the language or are just starting out in this vast universe.

Pleco is an English/Chinese dictionary application available for iOS and Android devices from a company founded in May 2000 by the American Michael Love.

This is an app that is used daily by millions of people in at least 180 countries that is totally free and allows the opportunity to purchase implementation packages, additional functions and larger dictionaries right inside the app itself (see the details on advanced functions later on in the article).

Pleco includes different methods of input, such as inserting pinyin, choosing the root, using English, handwriting and the visual recognition of characters.

Unless you’re dealing with a truly rare character or one that’s hard to recognize because it’s not written properly, on this app you’ll always be able to find the character you’re looking for.

It itself, in fact, relies on more than a dozen different dictionaries that also include French (including the famous Grand Ricci with 310 thousand entries), Spanish, German, Italian (with a good 22 thousand entries), Cantonese, Classical Chinese, references to traditional Chinese medicine and more, some of which, alas, require purchase.

A small point about this app: it’s made up of the Chinese character yú 鱼 (fish) on a blue background. As is mentioned on the app’s official site, the name Pleco should be pronounced in English with a long E (plee-co) in reference to a type of fish (specifically a suckerfish by the scientific name of Hypostomus Plecostomus) that the founder had when he was little.

This explains (if that’s possible) the bizarre choice of name for an English/Chinese dictionary!

What are the positive aspects of Pleco?

First of all, it’s free. The free options offered by the system are more than all you need to get “linguistic” help.

Unless you’re looking for something specific in the add-ons for purchase (like a manual of Chinese history, a specific military lexicon or a dictionary of the Cantonese dialect), the app is already quite complete from the first download.

Second, it even works offline. Pleco, in fact, you don’t need an internet connection and this represents a huge advantage when you find yourself in China for a few days or are staying for just a brief period (and therefore don’t have a Chinese SIM card for internet traffic). Some of these types of apps actually need a VPN in order to work.

Pleco, is free of these types of restrictions and can be easily used anywhere, anytime!

Moreover, as a mobile app, it’s constantly being updated, and you’ll always have a current dictionary both from a linguistic and technological point of view. Not only are all headings updated, but also all other system functions as well.

Among the functions offered by Pleco, there are four in particular that deserve to be considered: the dictionary, the reader, the flashcards and the OCR.

As was already mentioned, the system relies on a wide gamut of dictionaries (including a small Italian dictionary with 22 thousand entries) which allows the user to have numerous examples to learn from, and from which you can get the exact pronunciation (including a recording in both male and female voices).

This last point represents a big evolution compared to paper dictionaries: now you can listen to the exact pronunciation of a character, word or entire phrase in the examples the system offers, encouraging the user to use them during their stay in China. And for those unfamiliar with the language, you can then “get the hang of it”.

Moreover, each color has a specific character that indicates the tone in which it should be read (in fact, in Chinese there are 5 tones if you also consider the neutral one): red for the first tone (妈, mā), green for the second tone (麻, má), blue for the third tone (马, mă), purple for the fourth tone (骂, mà) and gray for the neutral tone (吗, ma).

This structuring makes using the dictionary even more intuitive. Another feature tied to this function is the possibility to see that exact order of strokes that make up the characters.

This feature is obviously more useful for the users that are learning the Chinese language and need to be able to write characters by following the strokes.

It is possible, starting with a single character, to search for all words and examples that contain it so as to better understand the intrinsic and contextual meaning as well as its grammatical function within the phrase.

Lastly, thanks to handwriting, you can also search for a character even without knowing its English translation or its Chinese pronunciation (by inserting pinyin). This is actually very useful when you’re on the street and come across totally new characters or words you’ve never seen before; in a few seconds you can look up its meaning and pronunciation so as to impress it on your mind!

And if you really don’t remember them, you can always check the history section of your recent searches in the dictionary, reader, OCR, pinyin or recently created flashcards.

This function is very useful to comfortably read a document that has Chinese characters.

The Pleco reader includes all the conveniences of just about every other reader, but also has some particular functions.

Choosing almost any character or word within an open document with the Pleco reader, it automatically opens a pop-up that will show you the definition as if you had searched for it in the dictionary. This allows for quicker and more fluid reading and comprehension.

The famous flashcards are perhaps the most popular feature in recent years for students learning a foreign language, especially for complex languages that require a healthy dose of memory and phosphorus like Chinese, Japanese, etc.

With Pleco you can make flashcards with almost any character in the system simply by clicking on the + key on the top right of each page. After making all the flashcards you need you can start practicing by using the app’s free system.

You can organize your cards, take your prep tests, check your learning progress, etc. This is a feature mainly for those who are learning Chinese, especially in the first few months; having the support of an electronic dictionary, this method of learning characters will be very effective and intuitive.

This least feature (Optical Character Recognizer) is probably the most useful. With the simple use of your cell phone’s camera you can decode characters printed in a book, shown on a screen, written on a chalkboard, etc, which you can then export in digital format or look up on Pleco’s dictionary if you don’t know its pronunciation, English translation, and aren’t able to use handwriting.

You can even capture an entire portion of text and digitize it in a text file on your cell phone so that you can comfortably work on your pc. This is a rather useful feature for those who need to export written text on a non digital support so that you can take advantage of all the functions of that type of file.

For example, it’s very useful for a translator to have a digital file rather than a paper one just because a digital file will allow you to use all the technological advantages, while working with a paper file is much more limiting.

What are the negative aspects of Pleco?

Compared to the positive aspects of the system, there are very few negatives. If you really want to find one, then the add-ons for purchase would certainly be it.

There’s a fee for the Chinese/English dictionary (9.99 USD) and, as one of the last dictionaries inserted into the system, the Italian version contains some errors besides not having an adequate number of translated headings.

The OCR system also has a fee. The system offers a basic demo version of the OCR that doesn’t support all the useful functions listed earlier (definition of the decoded character, the option of copying, sharing and exporting text, creating flashcards, hearing the pronunciation, etcetera).

In addition, this system also has some problems decoding characters: at times it requires a lot of time and a surgeon’s hand to recognize the desired character.

Other small negative aspects are found in the dictionary section: some entries, for example, don’t provide an audio track or the order of strokes, which as we just said, can at times be a really big help.

In short, each feature offered by Pleco can be noticeably improved by adding packages (Handwriting Recognizer, Flashcard System, Document Reader, etcetera) whose prices go from 4.99 USD to 9.99 USD.

Pleco represents an excellent app for learning Chinese. Despite its “negative aspects” (if you could call them that) it is certainly a must for Chinese learners around the world.

I'm a fan of the Chinese language, books, and editorial tradition. I love to write and travel anywhere and in any way, but Asia has the priority. You can find me on Linkedin!