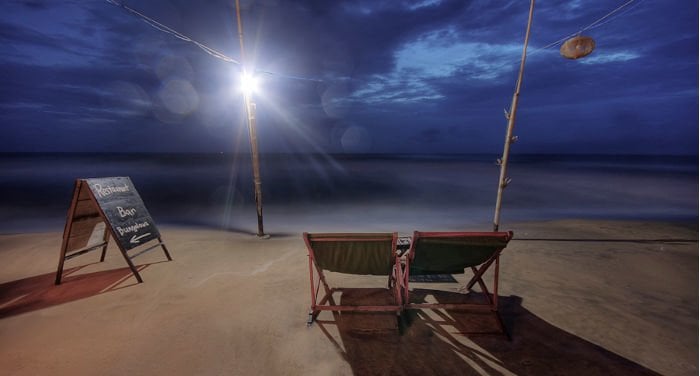 Located in the Gulf of Thailand, 500 kilometers from Koh Chang and just 50 from the Vietnamese coastline, Phu Quoc is an excellent destination for those looking for warmth and tropical beaches all year long.

Thanks to its geographical position, Phu Quoc isn’t much influenced by the seasons, making it a place to visit 12 months out of the year. The best time period however is from December to March, when the weather is drier compared to other months and temperatures reach a high of 28 degrees, with calm seas that are ideal for fans of diving.

April, May and June could also be considered a good time to visit the island. During these months temperatures rise to as much as 35 degrees and the humidity is constant, though these factors make it possible to more easily find lower prices on hotels and flights.

Even though it’s a rather big island at almost 600 square kilometers, Phu Quoc isn’t a very well known international destination. This has kept the beaches from being overrun and you can still enjoy the local Vietnamese atmosphere.

90% of the island is covered by forest, and 70% is made up of a national park protected by Unesco and the Kien Giang Biosphere Reserve.

The Phu Quoc district is made up of a good 28 islands, the majority of which are uninhabited. Up until the midway point of the 18th century, the island was scarcely inhabited even by the local population, who supported themselves by selling so-called sea cucumbers to the Chinese Emperor, which are invertebrates that live on the sea floor and are today considered a species threatened by extinction.

Various nations, including a few European empires, have occupied Phu Quoc from the 1800’s onward. In 1869 the island was occupied by the French and passed under the Cochinchina administration, a region in the south of Vietnam, with Ho Chi Minh City as its capital, considered to be a French colony.

Only in 1949 was Phu Quoc given to the Vietnamese government. During the Vietnam War, Washington expanded the existing prison of An Thoi and exported there 40,000 prisoners, a disproportionate number considering that at the time the entire population of Phu Quoc was a little more than 15,000 inhabitants.

In 1975 the island passed into the hands of the Cambodians, to then be conquered again by the Vietnamese a few years after the fall of the Khmer Rouge regime.

There are 3 interesting aspects about Phu Quoc that are worth mentioning:

How to book a hotel on the island of Phu Quoc

Click here to read our complete guide on which are the best platforms for booking a hotel in Vietnam, including the island of Phu Quoc.

How to get to the island of Phu Quoc

Thanks to the international airport that was opened on December 2, 2012 (a date chosen on the recommendation of a holy man), Phu Quoc is easily reached by direct flights not just from the most well-known Vietnamese cities but also international places such as Guangzhou (China Southern), Bangkok (Bangkok Airways), Hong Kong (Jetstar), and Kuala Lumpur (AirAsia).

If you’re staying in one of the two main Vietnamese cities, like Hanoi and Ho Chi Minh, there are several airlines that serve the route to the island of Phu Quoc. Some of the most popular are VietJet, Vietnam Airlines, JetStar, Bamboo Airways, but also Etihad, Emirates, and China Southern Airlines.

Nonstop flights from Europe to Phu Quoc depart from the most important capitals in the north of the continent. One example is London, which for a few years, thanks to Thomson Airways, offers direct flights every Monday of the month to the Vietnamese island for a total of about 12 hours of flight time.

If you’d rather try the experience by sea instead, you can take a ferry from Ha Tien or Rach Gia, located on the mainland. From the former it will take you and hour and fifteen minutes; from the latter two and a half hours.

The 6 most beautiful beaches on Phu Quoc

Even though the island is still not well-known on an international level, the Vietnamese government has expressly declared its intentions that Phu Quoc will become the new Phuket.

For just this reason, in recent years the number of resorts have grown exponentially; even some of the uninhabited islands have been inserted into a project for building luxury resorts.

Phu Quoc has tons of unexplored beaches, and the entire district, composed of 28 islands is formed by hundreds of kilometers of white and yellow sand beaches surrounded by exotic plants. Among the most interesting beaches there are:

A little note about the state of the beaches: those in front of the resorts are very clean because there’s regular maintenance. But the wilder beaches that aren’t in hotel zones, are unfortunately quite often filled with plastic and garbage, thrown there as if the beach were an open-air dump.

What to do on Phu Quoc

For water lovers and fans of activities like snorkeling or diving, Phu Quoc offers spectacular scenes. The majority of organized tours will bring you to the northwest of the island. The best period is between December and March, when the seas are calm, visibility is greater, and you can admire the coral reefs and tropical fish.

Besides tourist excursions, many schools also organize diving courses. Among the most well-known are Rainbow Divers, which offers days in various locations in both the north and south of Phu Quoc; the Flipper Diving Club, founded 10 years ago and these days considered one of the best centers on the island; and the Vietnam Explorer Dive Center.

Even though the religious creed of a little more than 50% of the Vietnamese population is Buddhist, there are a good 6 million people who consider themselves Caodaists. Caodaism (or Cao Dai), which literally means the Church of the Third Revelation, is a syncretic monotheistic religion, which would have established all religions of the world.

On the island of Phu Quoc you can visit two Caodaist temples, both located in the city of Duong Dong. The largest, most colorful temple is on Nguyen Road, while the second, smaller one, is located at Duong 30 Thang 4.

Ho Quoc is the largest Buddhist pagoda on the island. Opened in 2012, this temple is located on the east coast in a very scenic location between Dam Beach and the mountain, where you can admire splendid sunsets.

Here are some outdoor, natural activities you can do:

Phu Quoc also lists among its means of transport a cable car system made up of 70 cabins with wooden benches inside where you can sit and admire a 360 degree panorama. During the 20 minute ride between Phu Quoc and Pineapple Island, you’ll pass over the islands of Hon Roi and Hon Dua, which are part of the An Thoi Archipelago, considered as one of the most beautiful places to go snorkeling and diving. A ticket costs a little less than 6 Euros for adults and almost 4 Euros for children.

Another interesting experience is to visit the pepper plantations and fish sauce factories. On Phu Quoc there are almost a hundred places where they make fish sauce, with the majority located near the city of Duong Dong.

Making fish sauce is very simple: anchovies are placed in large containers, salt is added, and in the course of 12 months the liquid that comes out is drained.

You can visit the factories for free. One of the most well-known is the Khai Hoan Fish Sauce Factory, located at number 11 Hung Vuoung Street, in the town of Duong Dong. Inside you’ll see enormous red tanks where tons of anchovies are stored. You can also taste the two sauces they produce, and if you like them you can buy them in the local store.

Here too you can visit on your own and for free. In the central and northern parts of the island there are a good 400 hectares of plantations, where you can buy all four varieties of peppers.

Nicknamed Hell on Earth, Phu Quoc’s prison is today a museum where you can see close-up how prisoners of war lived during the French occupation.

Besides all these activities, you an also take excursions that are mainly geared toward Asian tourists such as testing your luck at the casino, see exotic animals close-up with Vinpearl Safari, or spend a day at the Vinpearl Land Amusement Park waterpark.