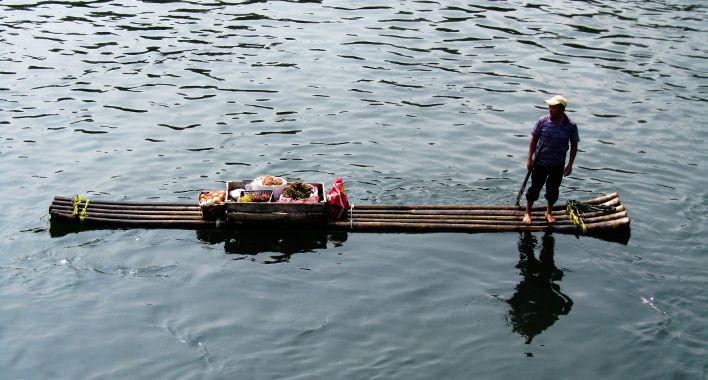 Guilin, in Guangxi Province, is one of most popular touristic destination in China as it’s the starting point of the cruise on the Li River – which is surrounded by impressive limestone formations – that ends up in Yangshuo.

How to get to Guilin

The easiest way to reach Guilin is by plane as there are flights from about any Chinese major city. Also, there are flights from Hong Kong, Kuala Lumpur, Bangkok, Osaka and Seoul. The airport is a bit far from the downtown so expect to pay about 100 yuan for a taxi’s ride. You can also take the shuttle bus (20 yuan) and then a taxi to downtown as the bus will stop on the South of the downtown.

Beside the plane you can also reach Guilin by train; it will usually take at least 12 hours as the city is quite far from all the major Chinese cities and the high speed train didn’t arrive yet in Western China. Actually it took me 29 hours to get there from Chengdu. 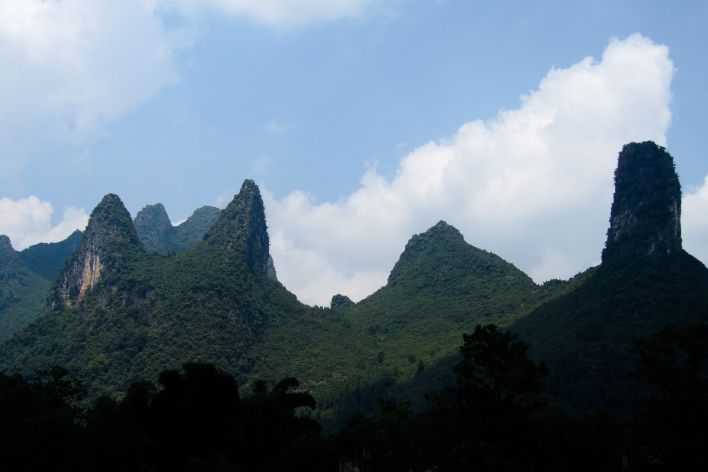 The “Cat” hills along the Li River

What to do in Guilin

Since everybody associates the Li river cruise and the beautiful hills of Guangxi province with Guilin, I thought this was the place where to go. I was wrong. There isn’t much to see in Guilin, which acts more as the hub to visit Guangxi province because there is the airport, the train station and the docks where most of the cruises start. 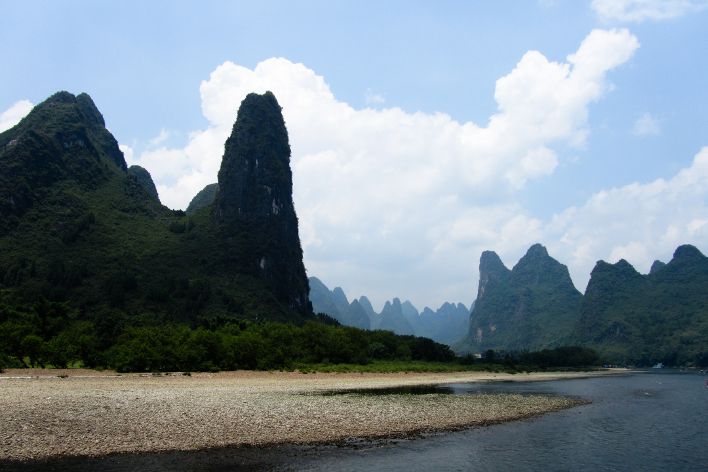 If you haven’t much time my suggestion is to stay one night in a hotel that is able to get you a ticket for the cruise (almost all the hotels offer this service) and then take the cruise for Yangshou (a small town where you can rent a bike and lose yourself among the limestone formations that you can find everywhere on this part of China) the morning after. Personally I stayed at the How Flowers Youth Hostel.

Click here to read our reviews of the best hotels in Guilin.

Even if the cruise is the main attraction of Guilin, you can also visit the Elephant Trunk Hill, the Reed Flute Cave and the Solitary Beauty Peak. Also, you can take a bus to Longsheng, famous for its rice terraces. It will take a couple of hours to get there. 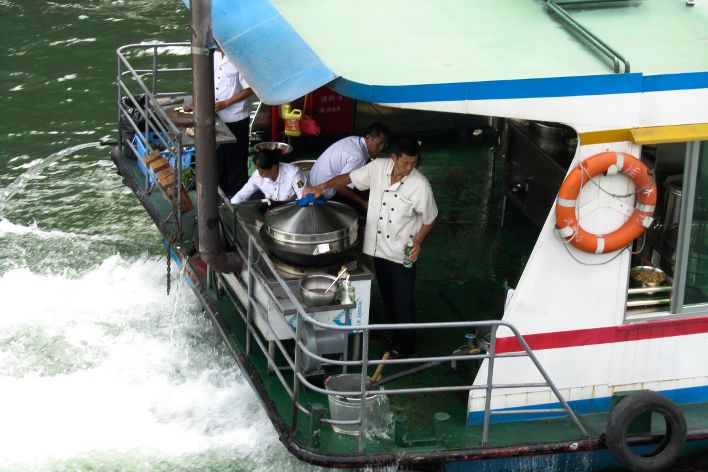 The price of the cruise will range from 200 to 400 yuan (one way). If you take the cheapest one there will mainly be Chinese tourists and the tour guides won’t speak English. My hostel only offered the “expensive” one (400 yuan) so my guide could speak English and most of the tourists were foreigners.

A minivan will pick you up at your hotel around 8 a.m. and bring you to the docks to take the boat. Most of these boats leave around 9 a.m. and arrive in Yangshuo around 2 p.m. The ticket also include the lunch, which is served on the boat at noon. The food is ok (Chinese style).

For what I noticed many tourists will let their luggage at the hotel, spend a couple of hours in Yangshuo and then take the bus back to Guilin (it takes around 45 minutes). However I suggest you to book an hotel in Yangshuo and, if you can, spend at least one night there so you’ll have the time to rent a bike and visit the countryside (highly recommended, I’ll talk about Yangshuo in one of my next articles). 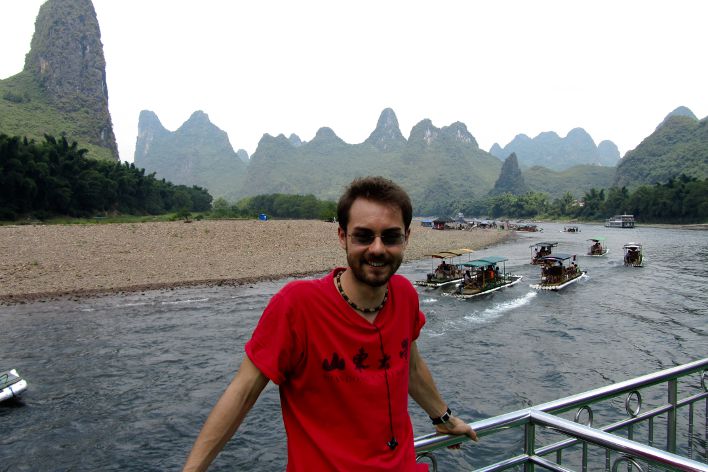 What to expect from the cruise

As I said, Guilin is one of the most popular destinations in China. This means that it’s packed with tourists and there are so many boats that it’s difficult to take a pic of the river without a boat in the background.

If you like to take pics just head to the roof of the boat and enjoy your time. Don’t forget to bring your sunscreen because the strong sun of South China combined with the reflex from the iron’s roof of the boat is a bad combination for your skin. I ended up completely burned. 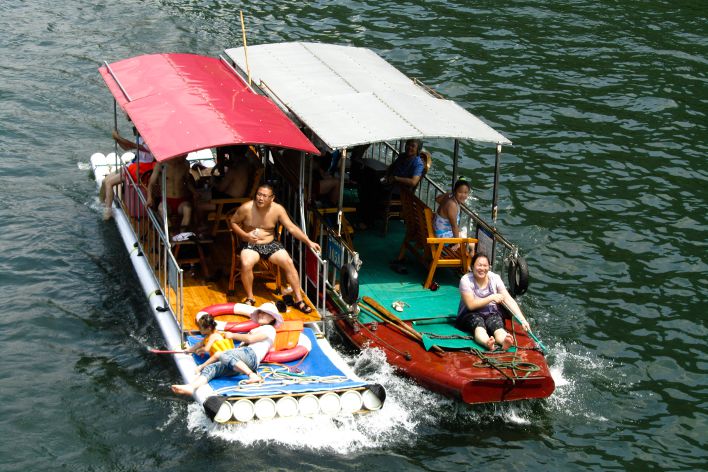 Since there are so many boats and every boat it’s so crowded you’ll probably feel a bit disappointed by the experience, especially if you were expecting a quiet cruise (I was… such a naif guy). This is the reason for which many people prefer head to Yangshuo directly from Guilin’s airport and get a small boat over there, better if late on the afternoon when the river is less crowded. This is probably more expensive – not sure though – but it’s what I’ll do if I ever come back to the Li river. 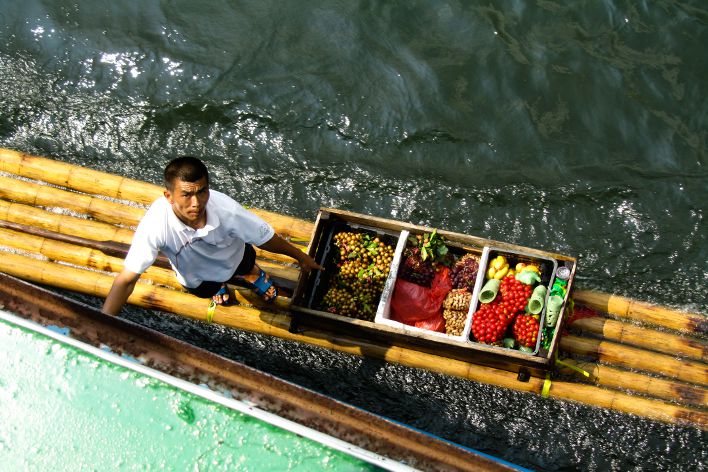 Even if the landscape is beautiful, the best subject for my pics were the fruit sellers that would approach the boat on their small bamboo boats, secure themselves with a hook as if they were pirates and offer you any kind of tropical fruits. I never saw that before! 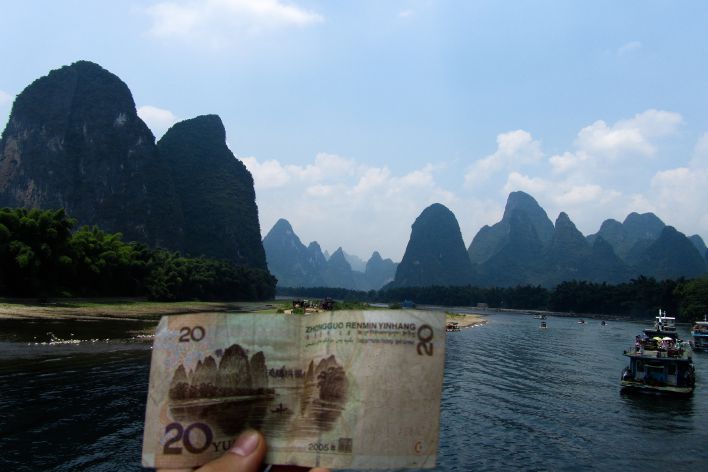 The photo on the 20 yuan note

If you live in China than you’ll see the Li river every time you pay with a 20 yuan note. I know it’s silly but I couldn’t resist: I had to take a pic on that exact spot so I asked to the guide to tell me when we would be close to the place where the original photo was taken.

The funny stuff is that when people understood what I was doing everybody hurried up to get a 20 yuan note and take a pic as well.