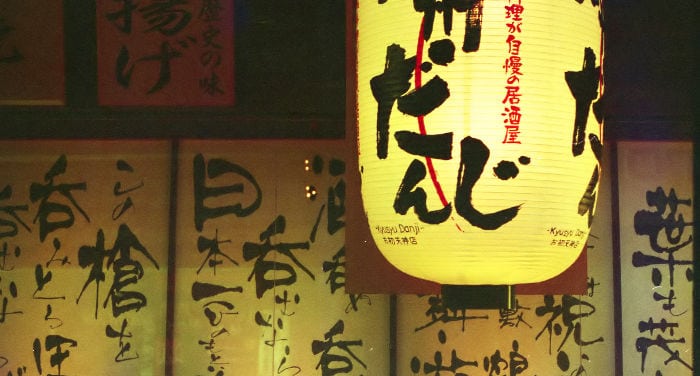 In this article we’ll see the particles that indicate the aspect of the verb.

To indicate the completed aspect of the verb, or to represent the action as an experience had at least once in life or to indicate an action as a completed event, one would use the particle 过 (guò), which is inserted to the right of the verb to which it refers:

Note that the negating adverb 没 (méi) can also be followed by the verb 有 (yǒu), which means “to have / to have been” without this affecting the meaning of the phrase. Here’s an example:

Note that the particle 过 is used when speaking of actions in which the subject doesn’t regularly do or actions that happened in the distant past. Here are two examples:

我看过那个电影。
Wǒ kàn guo nà ge diànyǐng.
I saw that film (in the past).

As you can see in the preceding phrase, when you want to indicate the completed aspect of a verb that supports an object – in this case 吃饭 (chīfàn), which means “to eat”, the particle 过 is inserted between the verb and the object. For example:

It’s worth studying the structures tied to the particle 过 since it is frequently used in Chinese:

For the written form, it is recommended to use the more formal 尚未 (shàngwèi), which always means “not yet”, derived from the classical:

Curiosity: A phrase with the particle 过 can have the modal particle 了 (le) at the end to emphasize the sense of something that has already been done. It is very common to find a phrase that contains both particles listed above. Here’s an example:

To indicate an action in the course of development or at its conclusion at the time being referred to, you use the adverbs that are always positioned to the left of the verb.

The action in progress can take place in the past, present or future. Here are some examples:

To emphasize an unfinished situation you often use the modal particle 呢 (ne) inserted at the end of the phrase.

It is also plausible to use only the modal particle 呢, at the end of the phrase without the use of one of the aforementioned adverbs.

你在上网吗？没有，我在做功课。
Nǐ zài shàng wǎng ma? Méi yǒu, wǒ zài zuò gōngkè.
Are you on the internet? No, I am doing my homework.

To form a phrase in the negative form, depending if it is an action happening in the present, future or past, you use one of the following structures:

我不是在吃饭。
Wǒ bù shì zài chīfàn.
I am not eating.

Attention: the progressive form can also be used with adjectives that indicate a psychological state or temporary feeling, such as 的时候 (de shíhou), or one of the time-related expressions of the Chinese language that can be translated as “while/when”.

To indicate the persistence of the action of a verb you need to add the particle 着 (zhe) right after the verb it is referring to. Here are some examples:

Note that when you express the continuation of a generic action (to watch, listen to, eat) it is preferable to omit the particle 着, and exclusively use the adverbs 正 , 在, 正o 在.

The particle 着 is however obligatory in the presence of verbs that express actions that are temporary or momentary. After verbs such as 坐 (zuò) “to sit oneself”, 穿 (chuān) “to put on”, 站 (zhàn) “to stand up”, 开 (kāi) “to open”, 戴 (dài) “to put” (glasses, hair), 贴 (tiē) “to glue/attach”, 摆 (bǎi) “to place”, 等 (děng) “to wait”, 点 (diǎn) “to turn on” (the light), the particle 着 indicates the persistence of the state derived from the action of the verb.

This construction indicates the interruption of an action or a state that persists, followed by the start of a new action or the change of a state of being. This is one of the constructions that we foreigners have a hard time mastering, so practice a lot!

Note that the particle 了 is the most appropriate one to indicate change.

Another commonly used construction which indicates that the speaker is busy doing something is the following:

忙 (máng) is a predicative adjective, which means “to be busy, to be occupied”

Curiosity: being busy doing something in China is considered something noble, honorable, so much so that the greeting that has always been popular in China represented as 吃了饭没有？(chi le fan mei you?), which means “Have you eaten?” is gradually disappearing, being replaced by the more common 最近忙吗？ (zuijin mang ma?), which means: “Are you busy lately?”