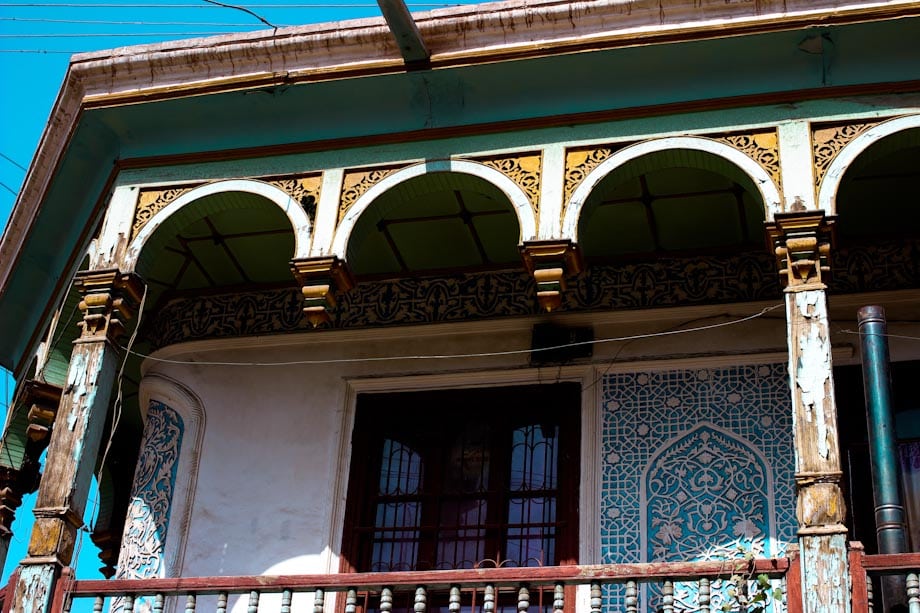 Kashgar, which was one of the most important oasis along the Silk Road, is situated at the extreme West of Xinjiang Province, between the Taklamakan Desert and the border with Tajikistan and Kyrgyzstan.

Even if today has about 400,000 people and its newest neighborhoods are similar to many other Chinese cities, Kashgar features one the best-preserved traditional Islamic city of Central Asia.

With this photo essay I hope to introduce you to the atmosphere of a town that, in my opinion, has the same charm of another “Chinese” city soaked of history and mystery, Lhasa.

Behind the Id Kah Mosque 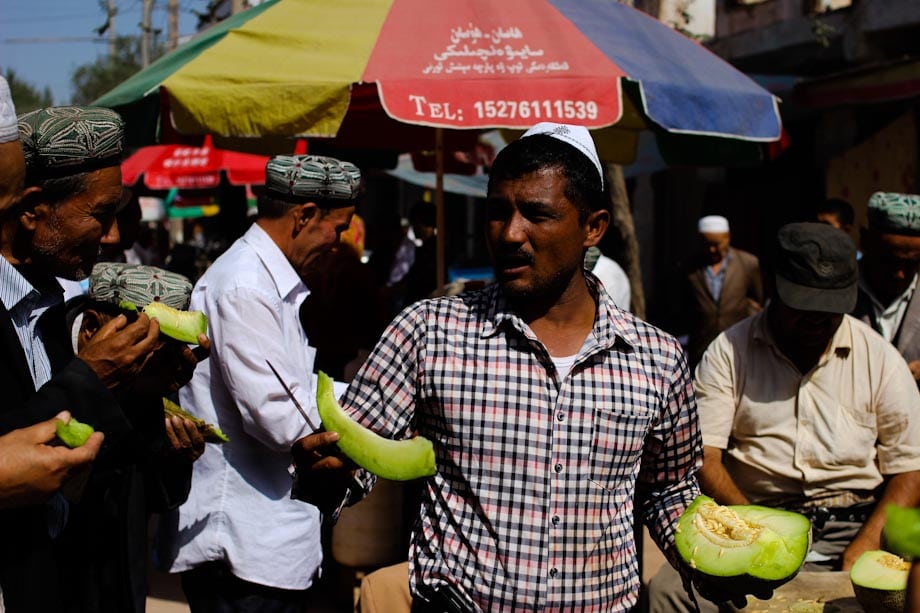 Before arriving to Kashgar I already knew that I was going to find a mix between Islam and China. However I didn’t do any research whatsoever. So after we checked in at the Pamir Youth Hostel we crossed Nuo’er Bei Xi Road, took a pic of the Id Kah Mosque and then went for a more pressing task: buy half kilos of raw almonds ; )

We bought the almonds and kept walking till a beautiful house that remembered me of Morocco or Andalusia (though I’ve never been there). We didn’t know it at the moment, but we just stumbled upon the Old Town 1 of Kashgar, a crazy market where in September you can find a great variety of melons, grapes, peaches and sheep meat dishes (as the photo below illustrates quite well). 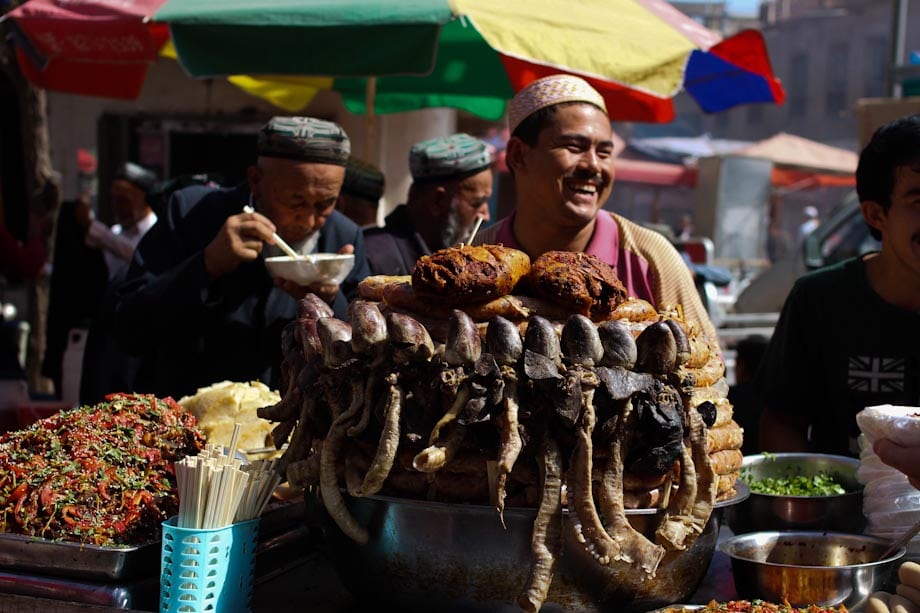 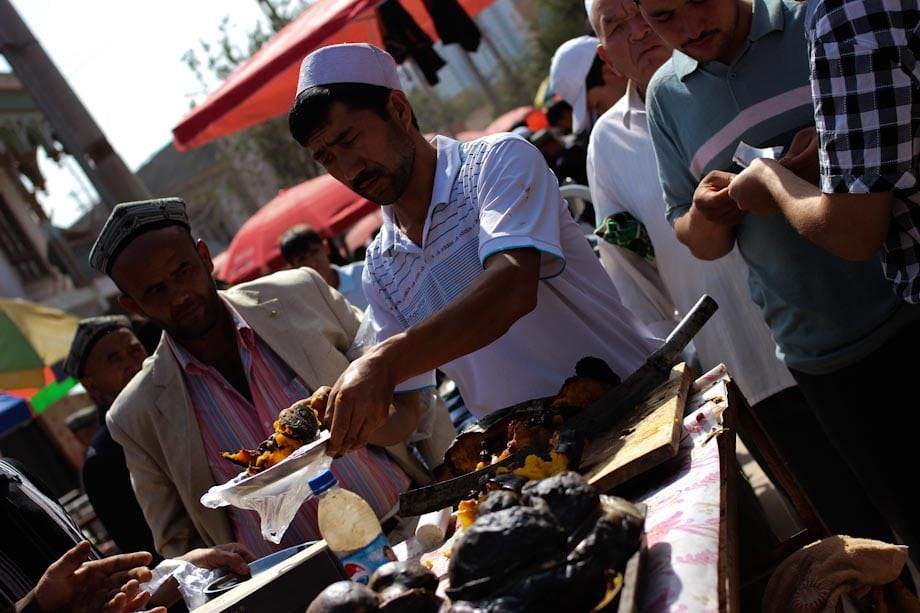 This market has a peculiar characteristic: there are no women and almost all the men wear traditional clothes and the doppa, the traditional Uyghur four-corner flower hat. 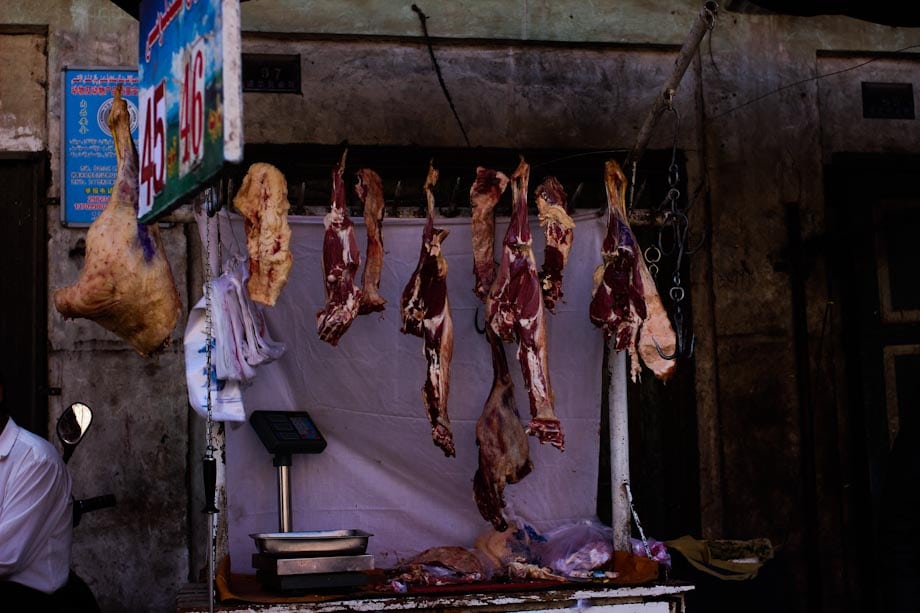 Beside the Night Market

After we visited the Old Town 1 (and ate way too much melon and too many figs), we came back to Nuo’er Bei Xi Road from the opposite side of the Id Kah Mosque, crossed Jie Fang Bei Road and ate some more melon at the Night Market that, despite its name, at three p.m. was already packed.

At this point a short explanation is maybe necessary. The melon that grows in Xinjiang is so big and sweet that in China the whole province has become synonymous of “melon.” The most characteristic melon from Xinjiang is the hāmìguā (哈密瓜), the green melon that only grows in the Hāmì prefecture of the East Xinjiang (the one sold by the guy featured in the second photo of this gallery). 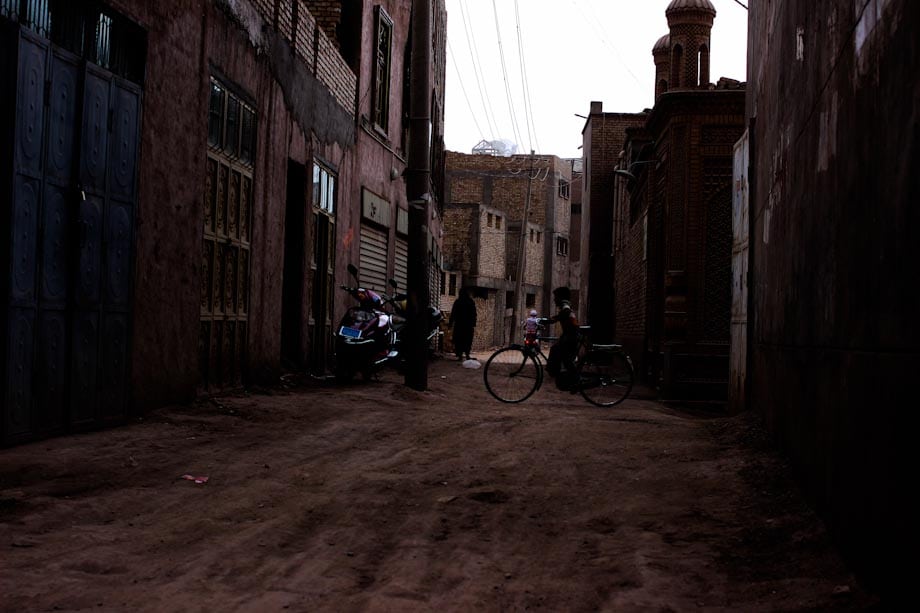 While we kept walking we saw a desert dirt road on our right side and decided to follow this new path. As we realized later, we just “discovered” the Old Town 2. 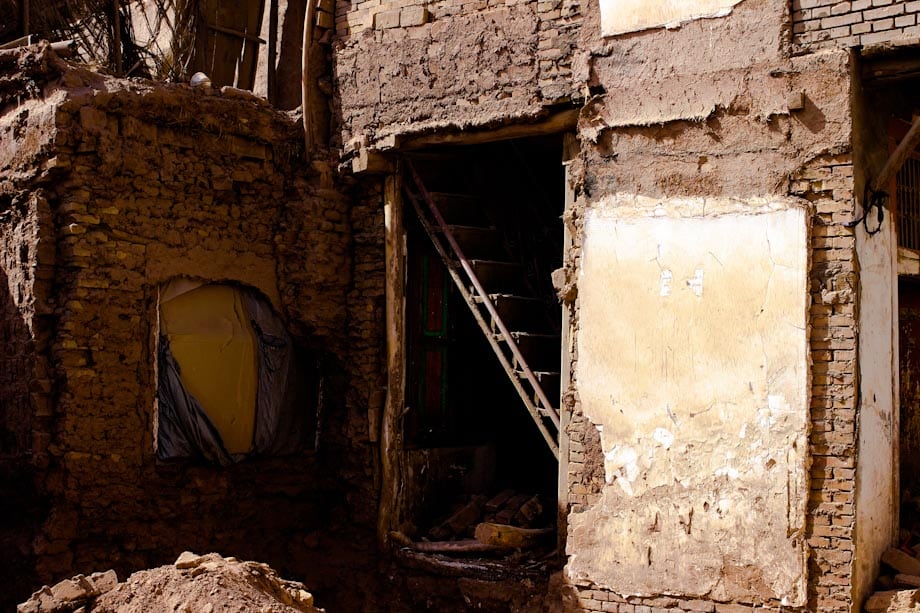 Here the atmosphere was completely different as there were very few people. We only met a flock of curious kids that joined us as soon as we started to take photos. 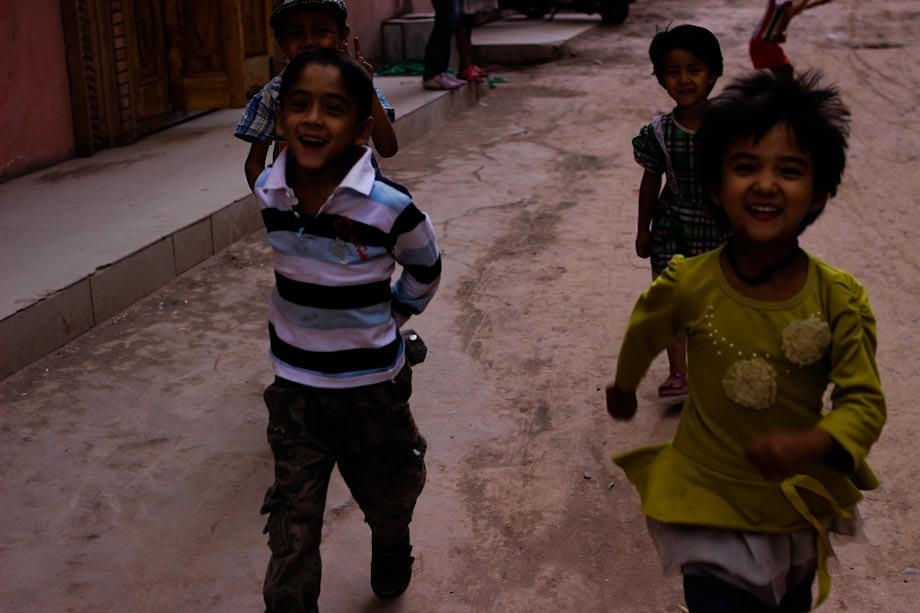 In front of the Sunday Market

It’s only during the weekend, after we visited the Sunday Market, that we discovered the last traditional neighborhood of Kashgar, the so-called Old Town 3. 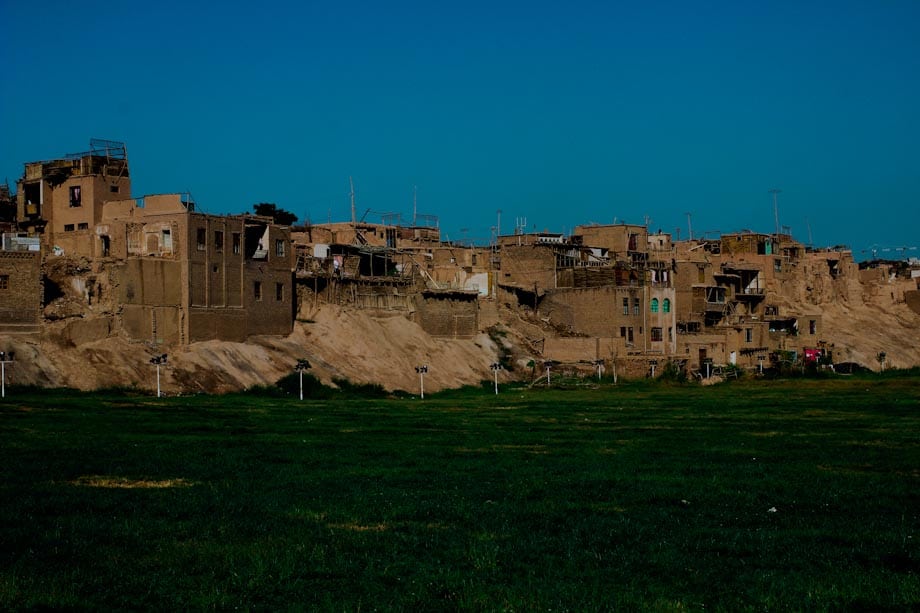 This is the biggest part of the Old Town and, in theory, it’s forbidden to the tourists. But we took advantage of a distraction of the guardian (she probably went to pee) and sneaked inside the neighborhood. 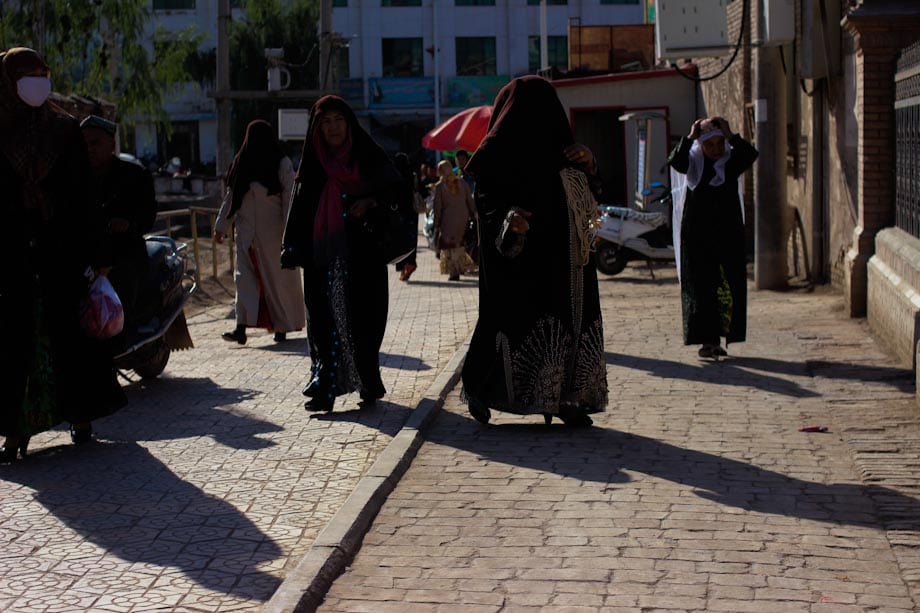 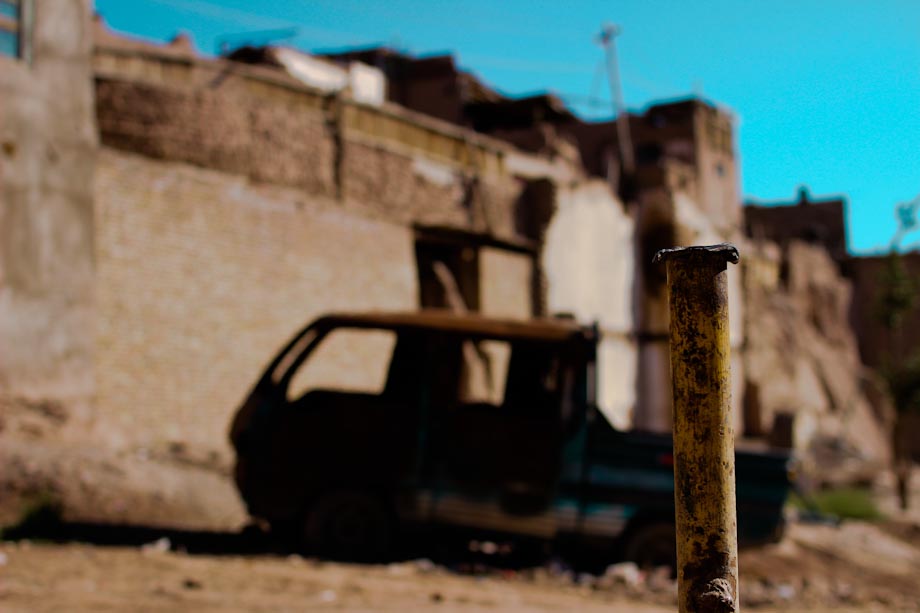 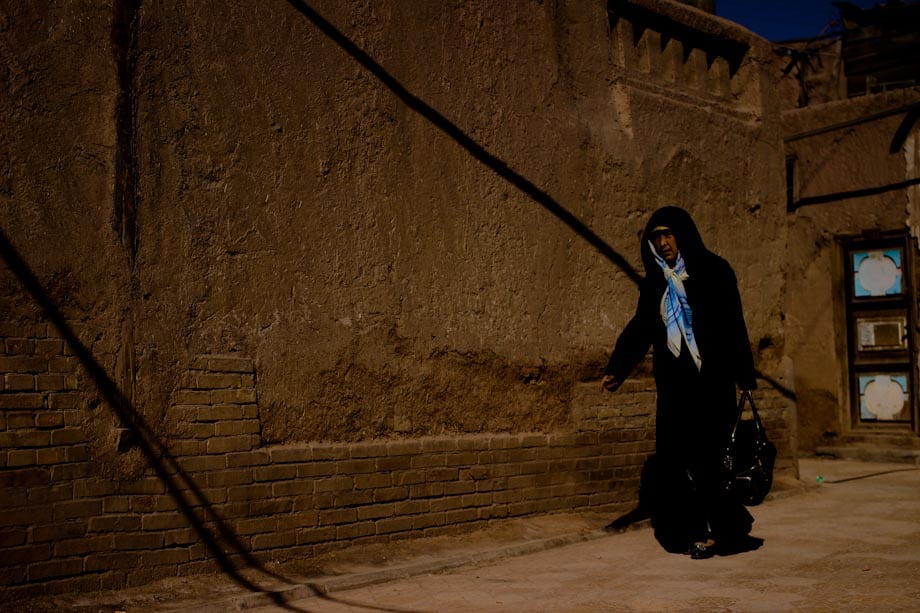 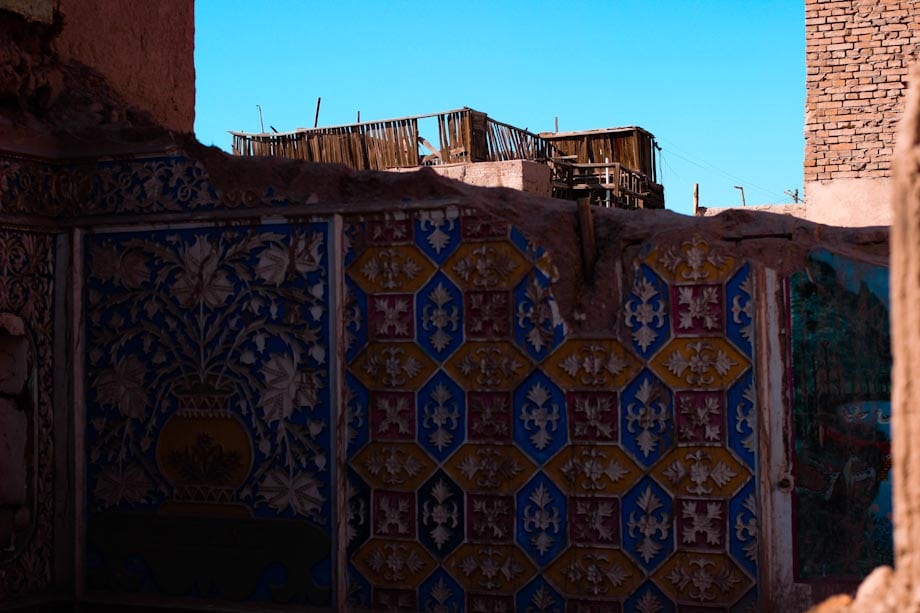 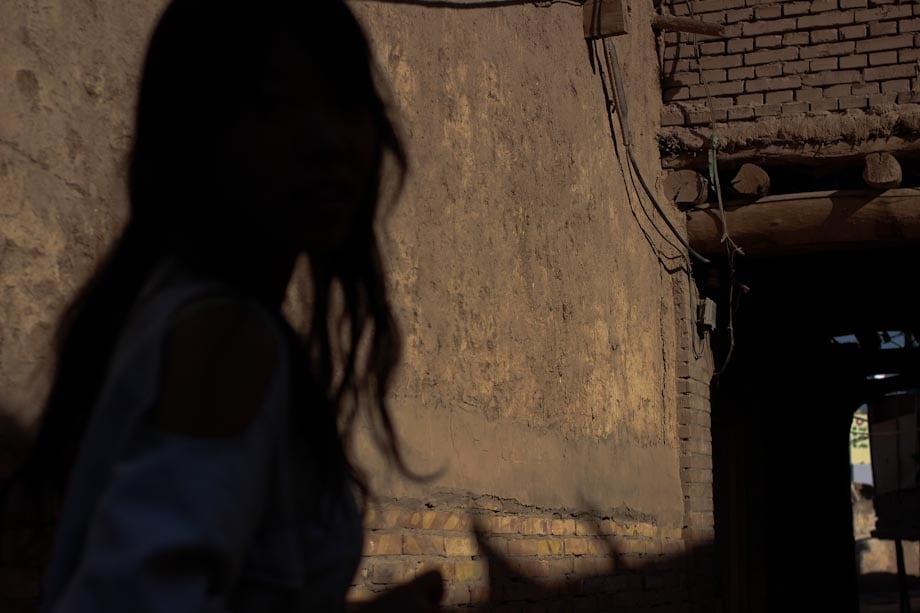 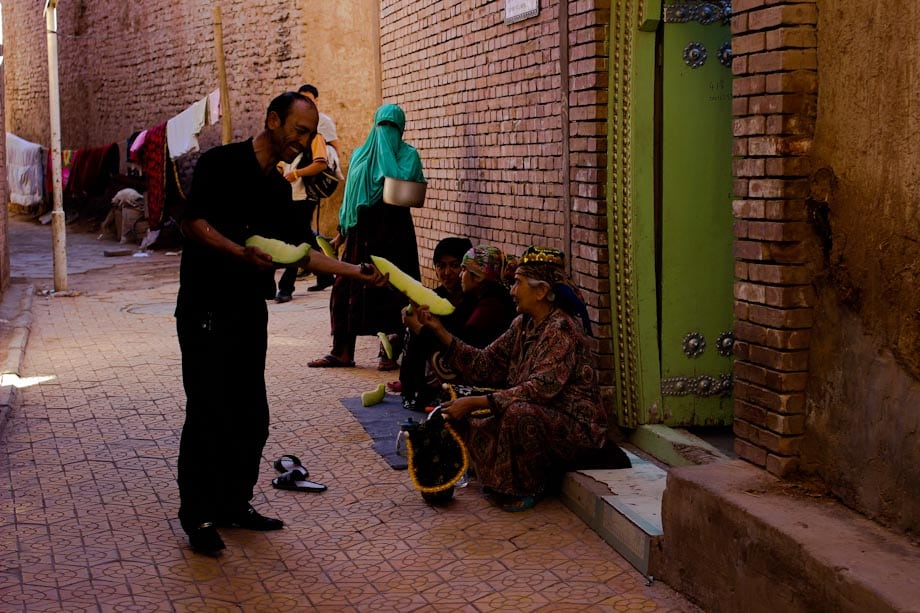 Also here there were few people, if we exclude a couple of girls covered by a burqa and a guy that is selling Hamigua door to door for a kuai per slice. 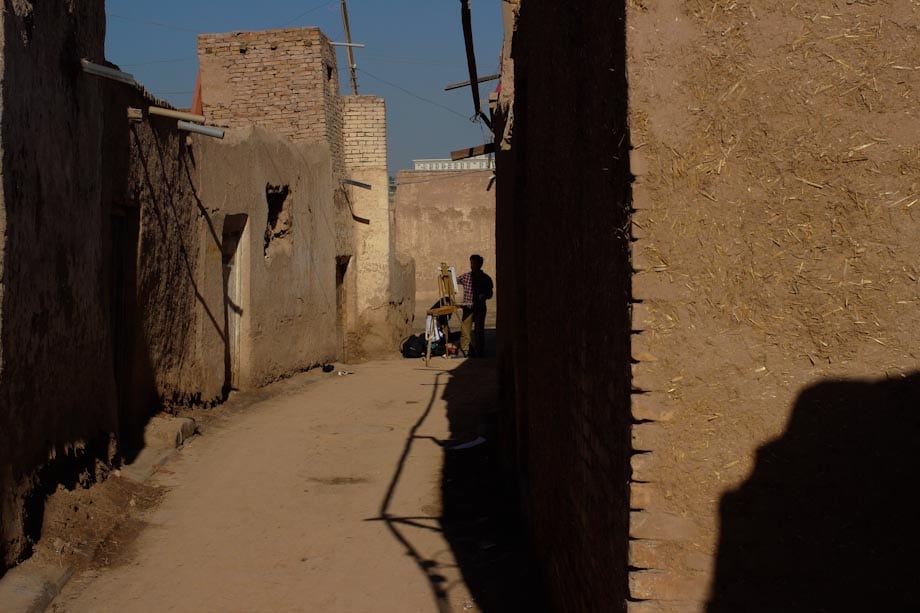 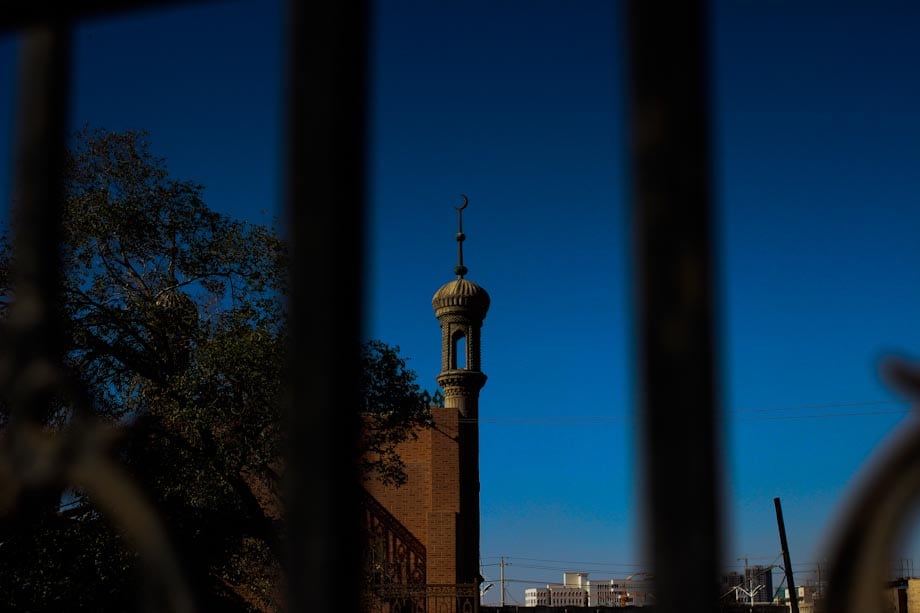 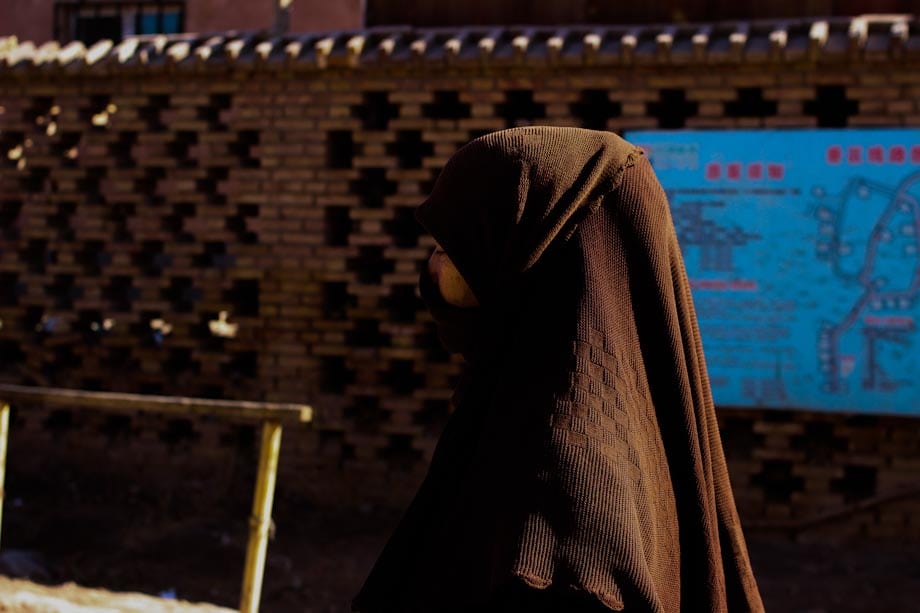 We exited the Old Town 3 from the same check point. This time the guardian cursed at us, pointing a panel that said “Forbidden the entry to the tourists.” We ignored her, crossed the road and came back to the Hostel through the restructured old town, which is less authentic but still interesting.

The next photo shows the queue for the public shower. The access to water seems still difficult here at the border of the Taklamakan Desert. 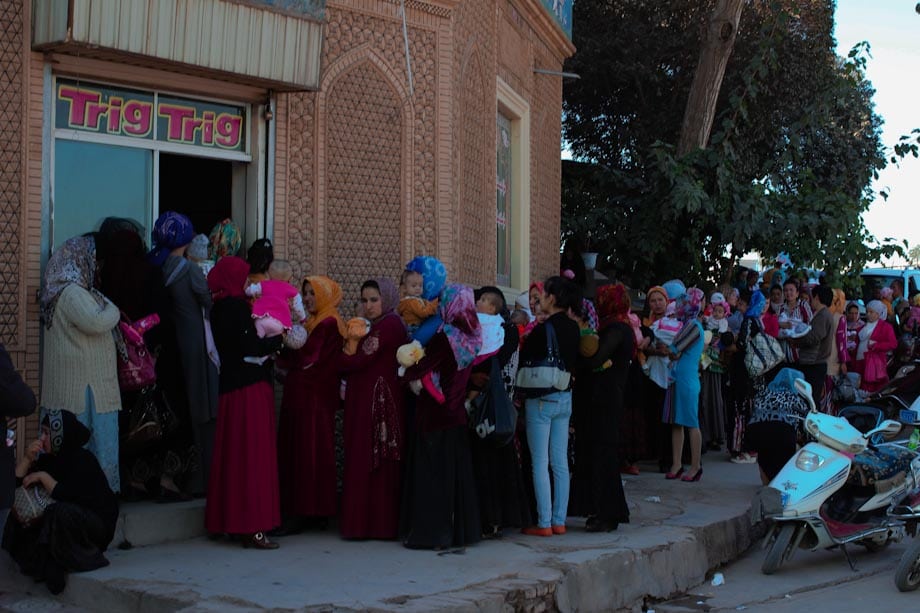 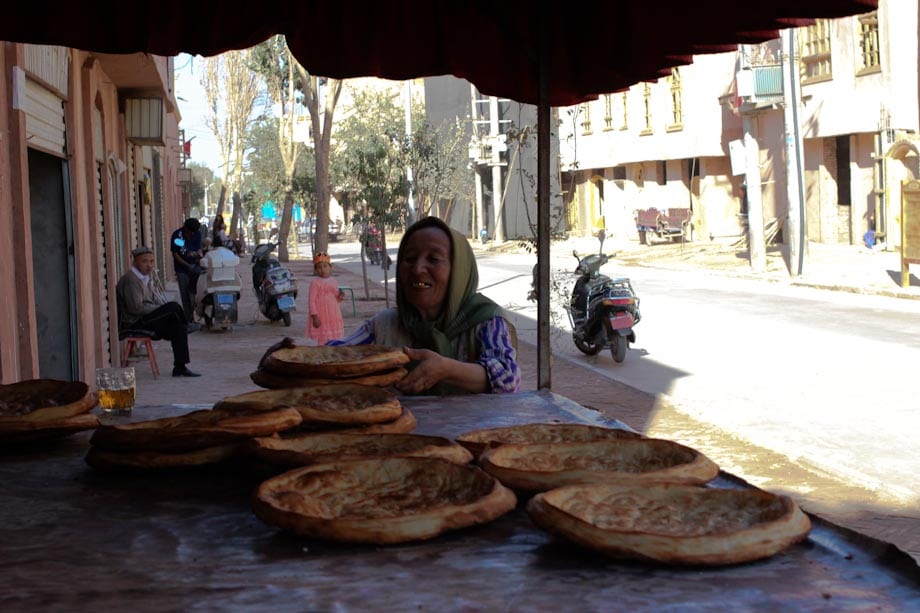 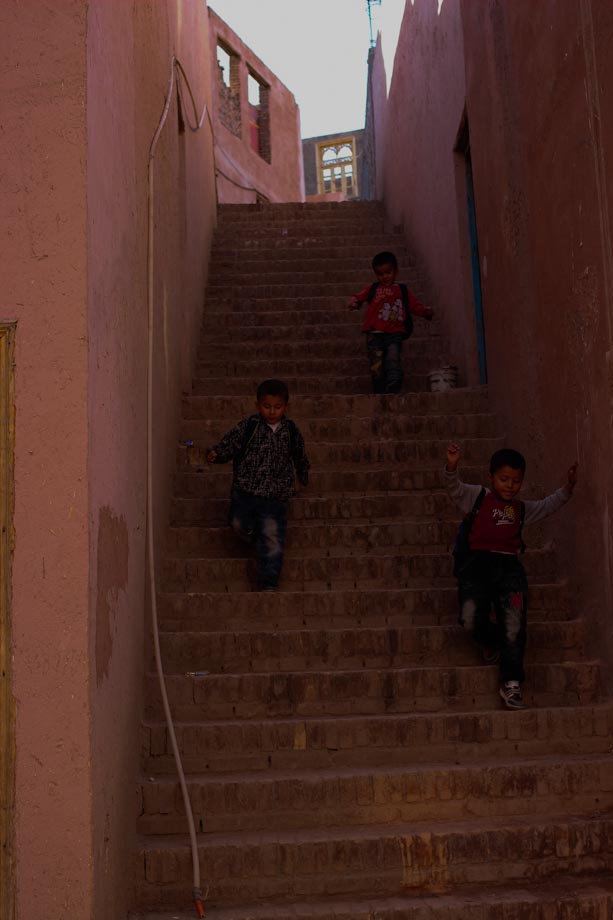 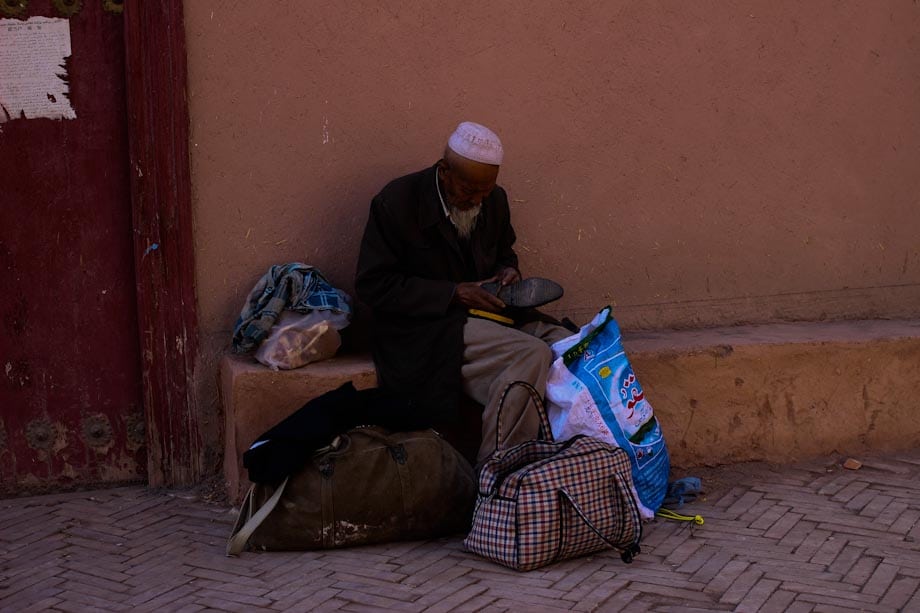 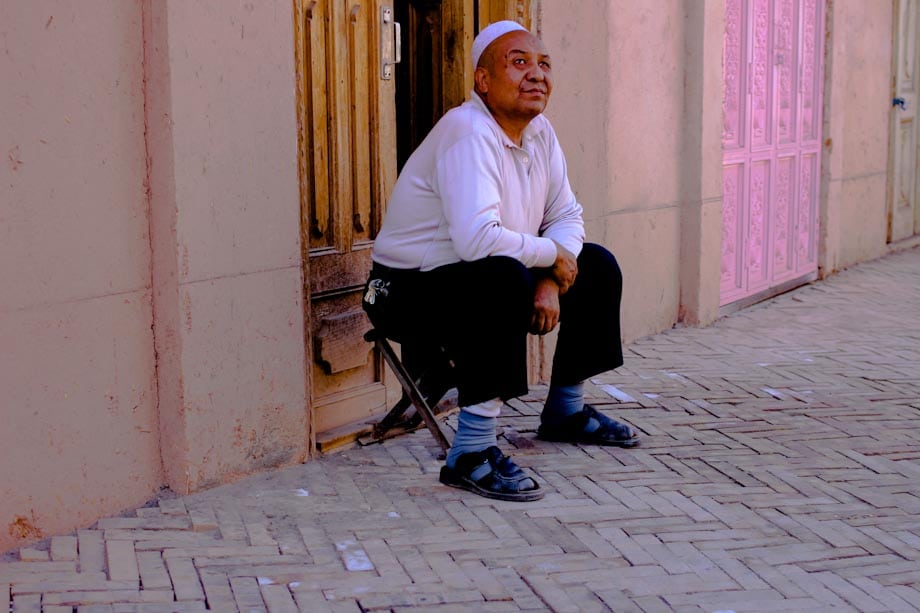