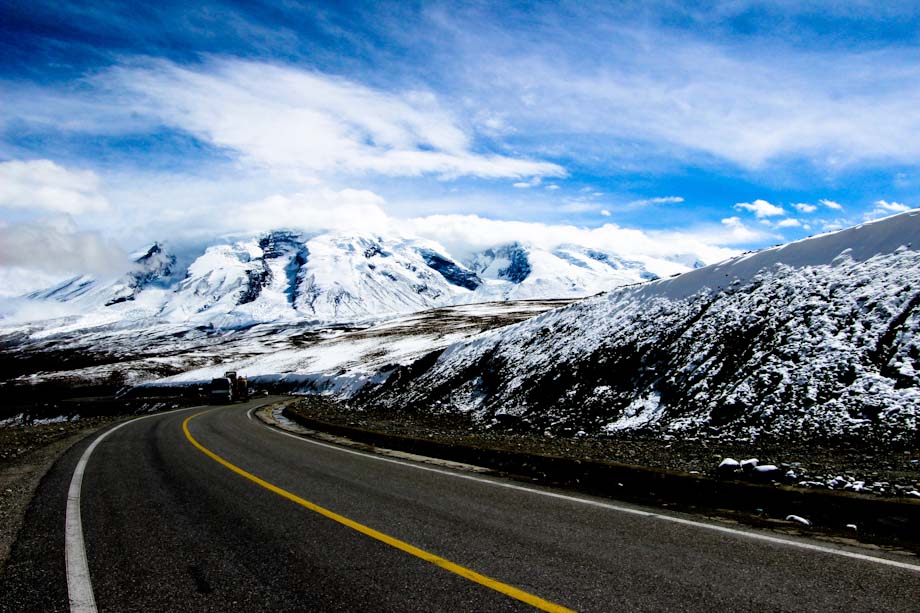 The Karakoram Highway follows the old Silk Road route between China’s Xinjiang Province and Pakistan’s Gilgit–Baltistan region across the Karakorum. It’s the highest paved international road in the world as the Khunjerab Pass reaches an altitude of 4,693 meters.

In September we rented a taxi in Kashgar (I was there with my girl and we found two other travelers to share the cost of the car, 1,400 RMB for two days) and drove along the Karakorum Highway till Tashkurgan, a town close to the border with Tagikistan and Pakistan.

This article is the photo story of our trip. Enjoy!

Across the check point

It seems incredible but, while foreigners can enter Southern Xinjiang by simply show their passport, Chinese people need a special permit. Hence we start our journey at the office that release the permit on the outskirt of Kashgar. After about an hour we are ready to go. 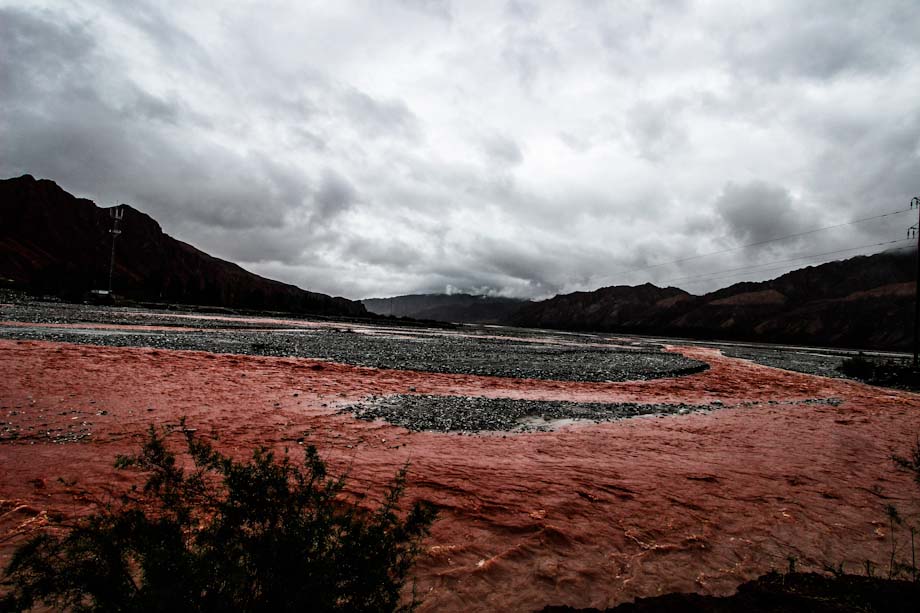 During the trip till Tashkurgan, about 300 km, we will stop countless times (mostly for taking pics or pee). The first stop is not far from Kashgar, where we cross a river that we can define at least original. 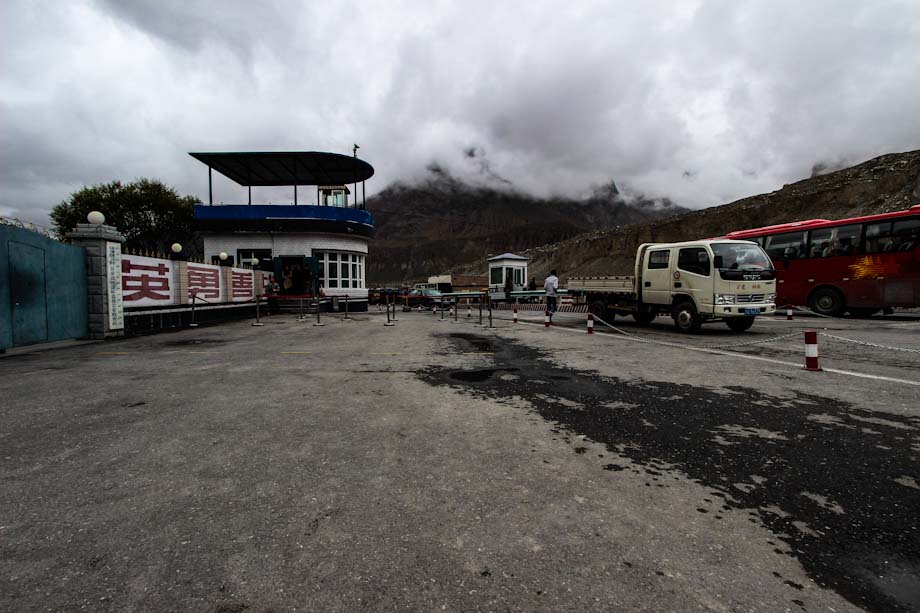 Then we keep going till the check point, where I have to show my passport and my Chinese fellows their ID card and special permit. Even if I couldn’t resist the temptation, you shouldn’t take any pictures of the military check points in Xinjiang as the police may scold you (as it happened to a Chinese that passed the control after us) or even confiscate your camera.

As rule of thumb, in Xinjiang and Tibet it’s safer to do not take any photos of soldiers and policemen. 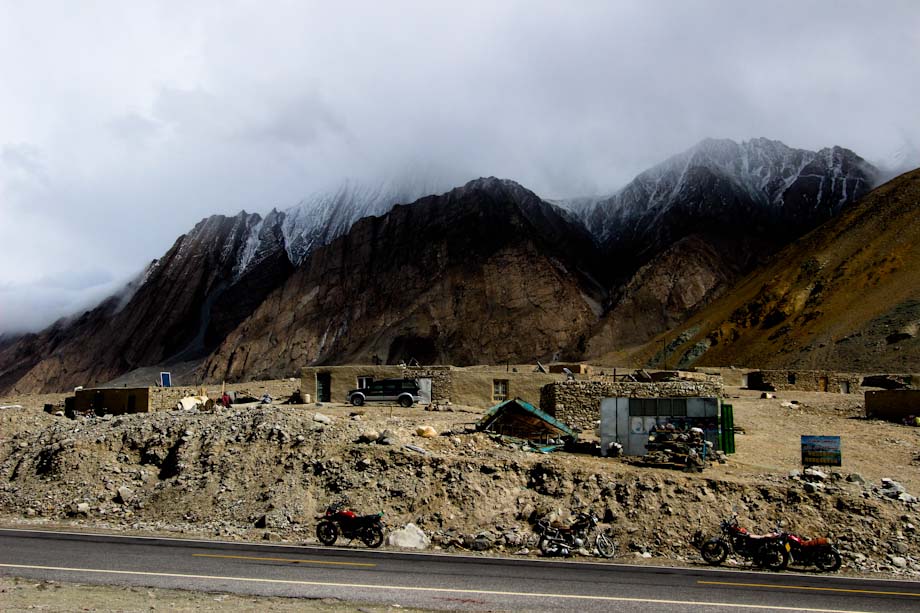 After about 80 km the street turns to South West and enters the Ghez canyon. Since now on the population becomes Kirgiz. They live in small villages like the one above. 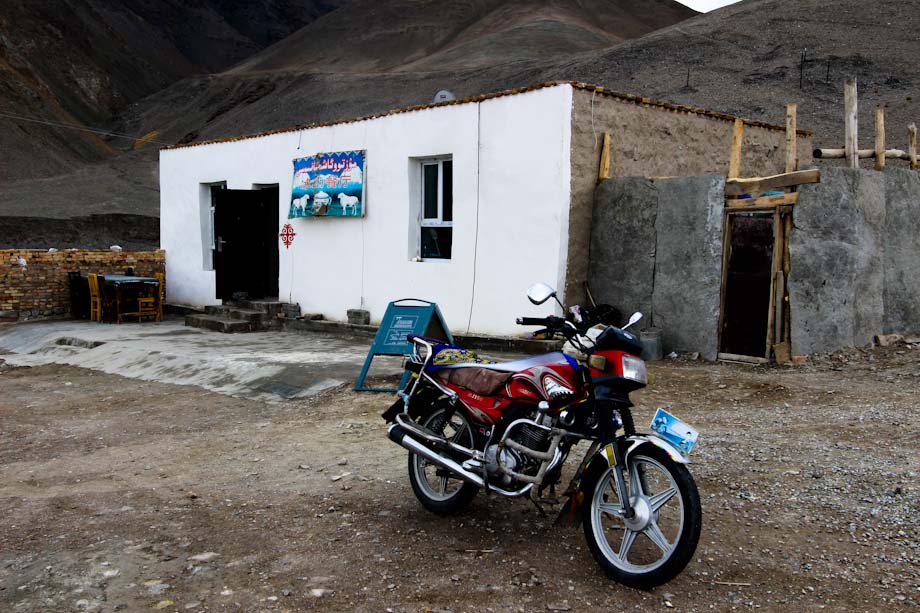 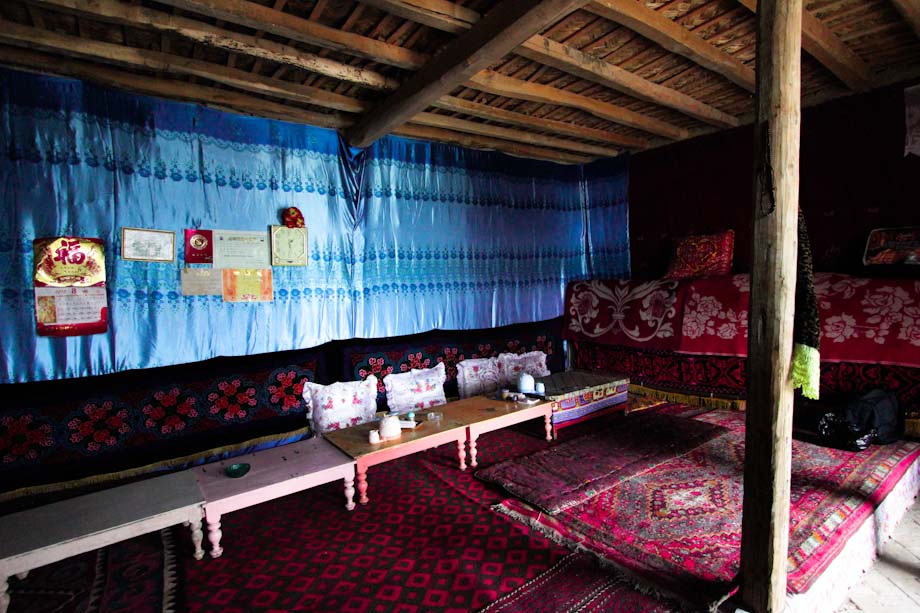 It must be said that there are almost no people that live here and the only “restaurant” between Kashgar and Tashkurgan seems to be the Bīngshān Cān​tīng (which means Glacier Canteen). 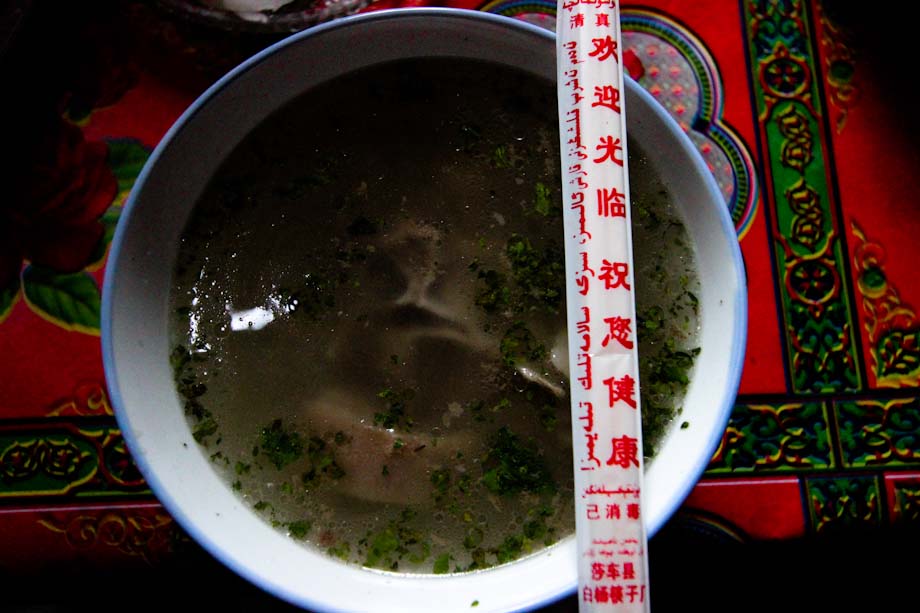 The only dish on the invisible menu is the sheep soup. It costs 20 RMB per person and it comes with a bread that looks like the donuts loved by Homer Simpson. The problem is that the “donuts” is so hard that you can only eat it after you let it rest on the soup for awhile. 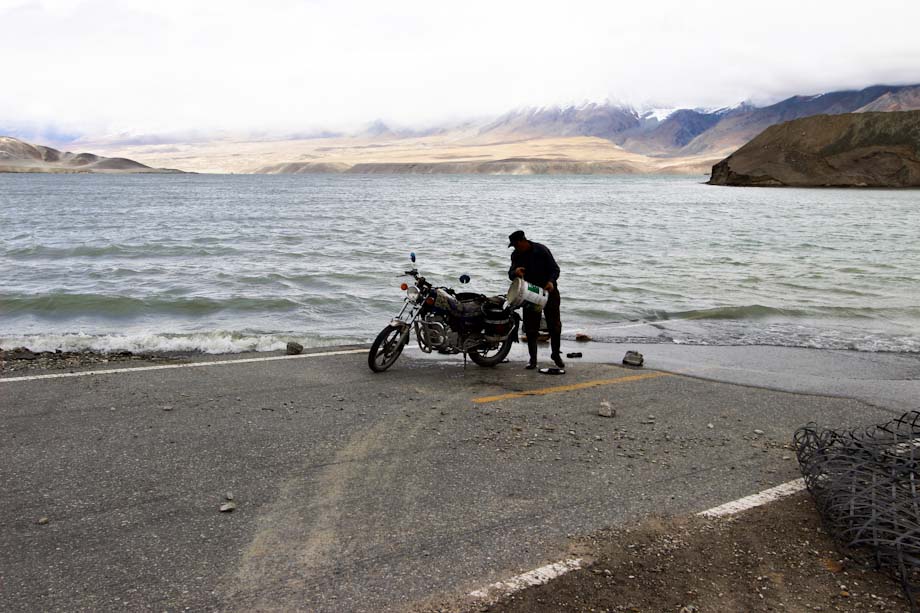 In the photo above, which is one my favorite from this trip, you can see a man that gets the water for the soup down the lake. 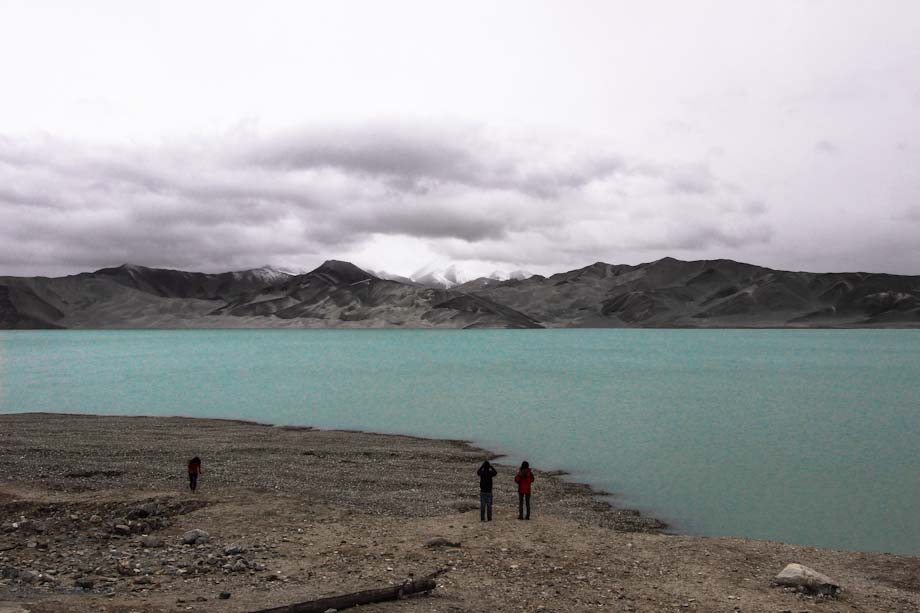 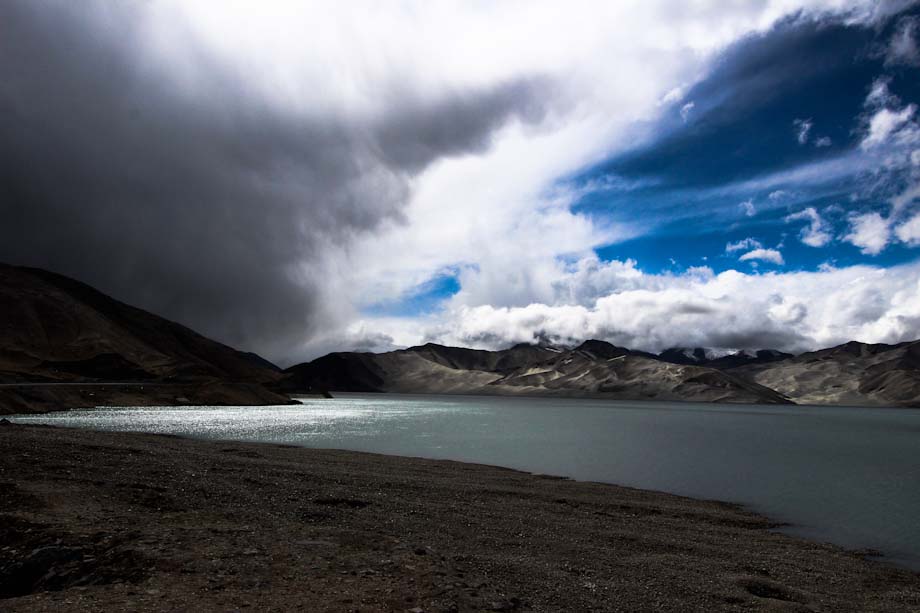 Yes, in front of the Glacier Canteen there is there is a lake, which I assume is called Lake of Aketikanbulong as there was a panel with this name just in front of the lake (though I was not able to gather any information about this lake on the Internet). 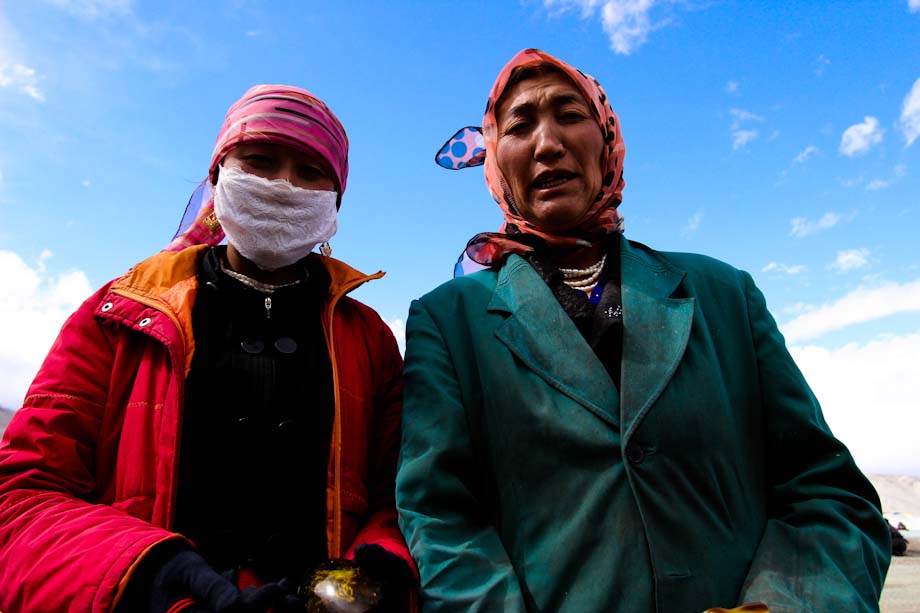 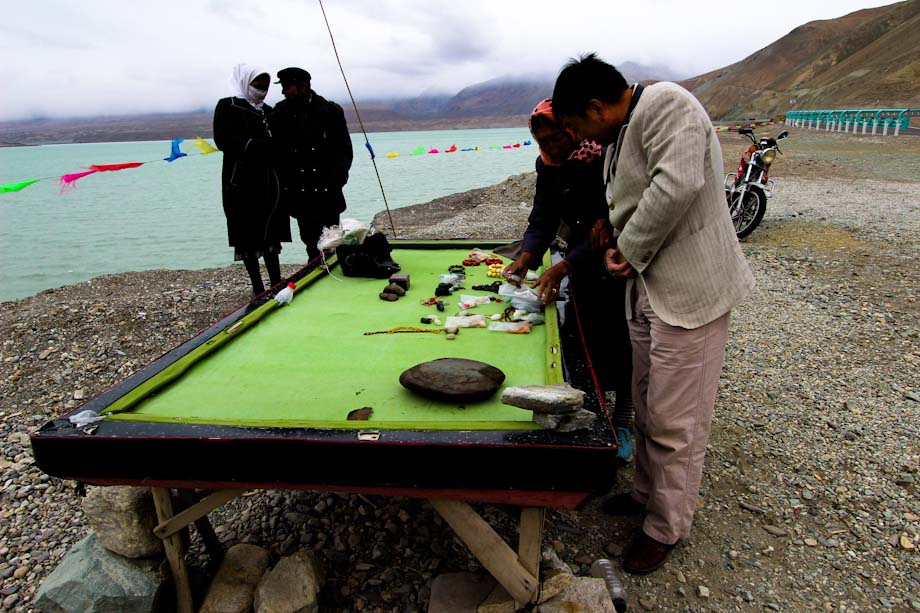 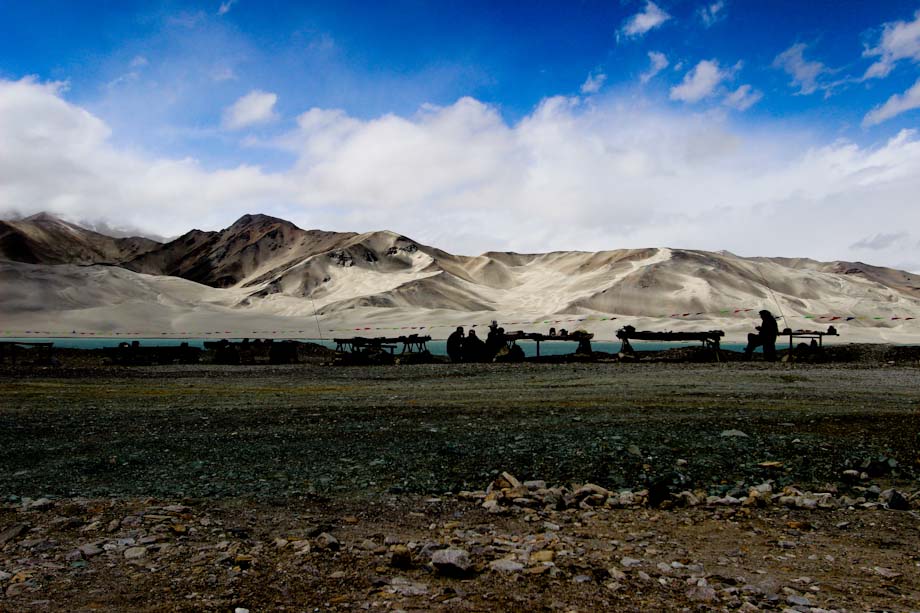 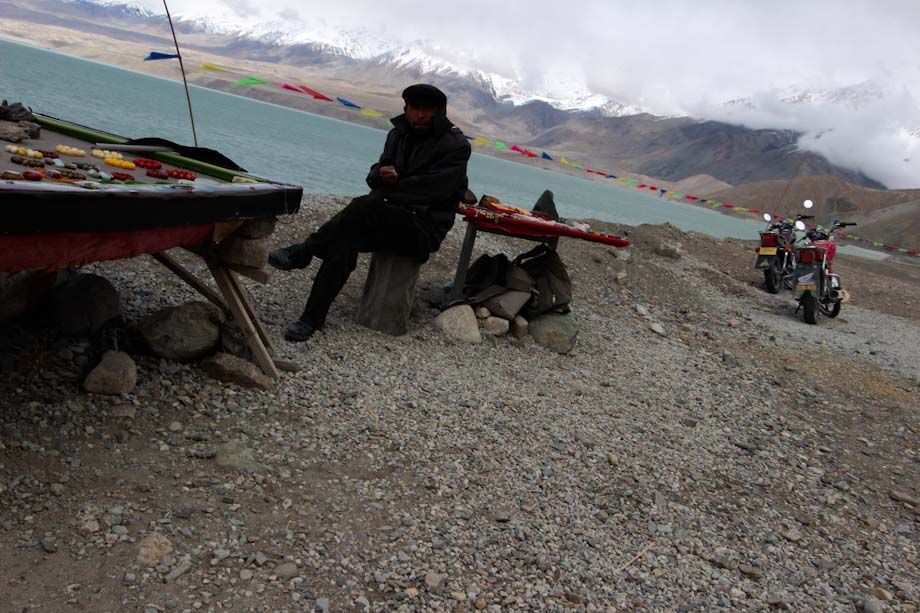 The lake is one of the most beautiful among the ones I visited in China. However I was much more interested on the Kirgiz guys (and girls) that try to sell you any sort of stones gathered around the region. The stones are exposed on old billiard tables, which are also used by the local people to get some protection from the wind. Here in Karakorum even in summer it can be pretty cold.

If you are wondering why the color of the sky looks so different it’s because I took some of the photos the first day while others the day after, on the way back to Kashgar. 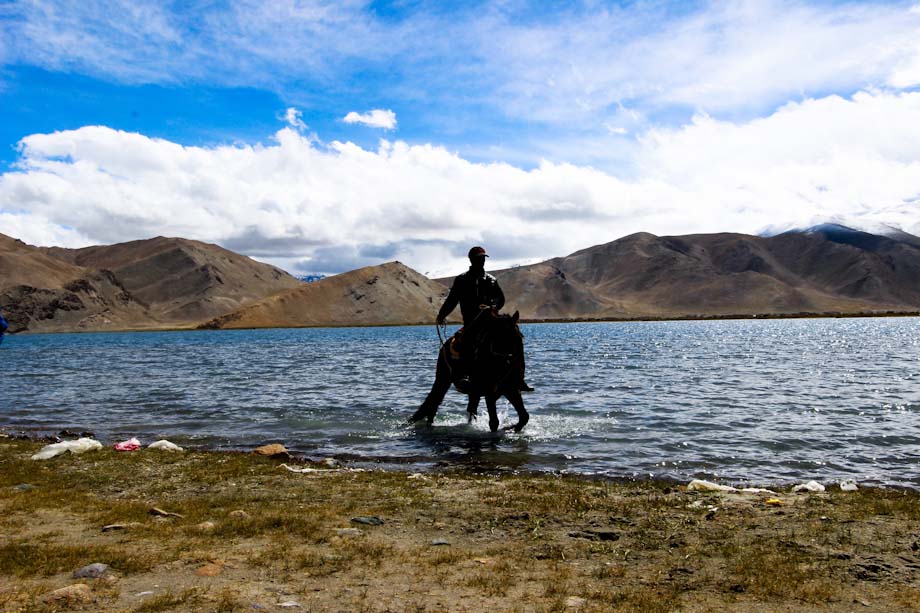 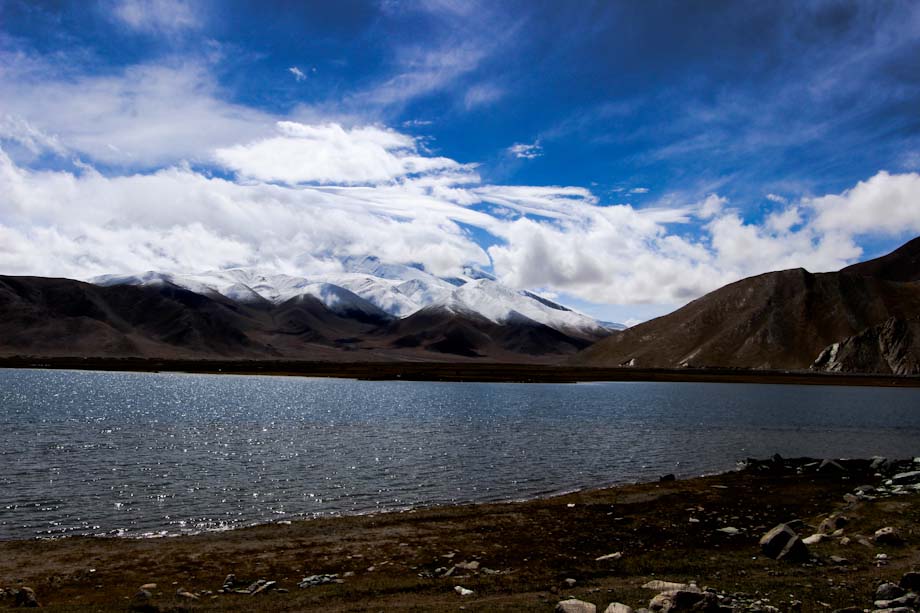 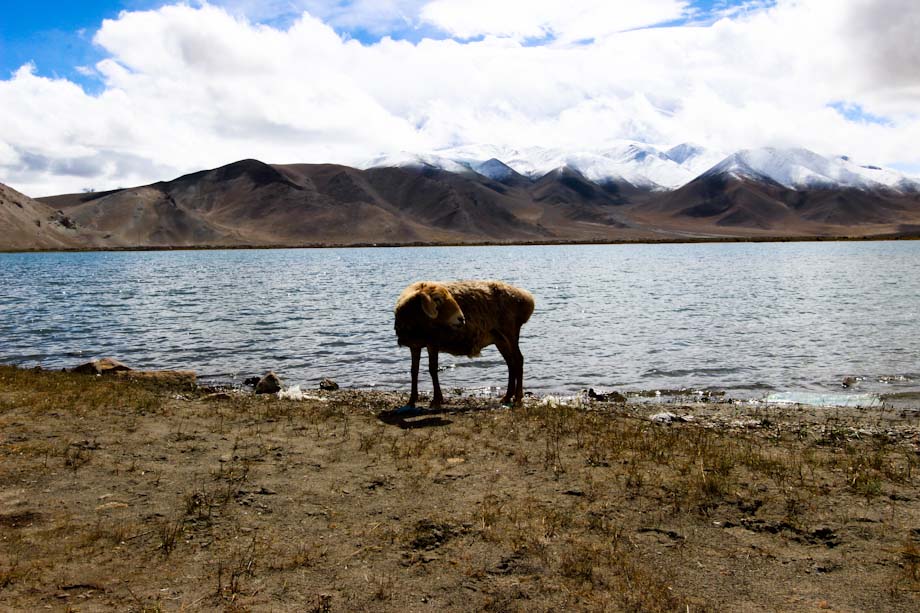 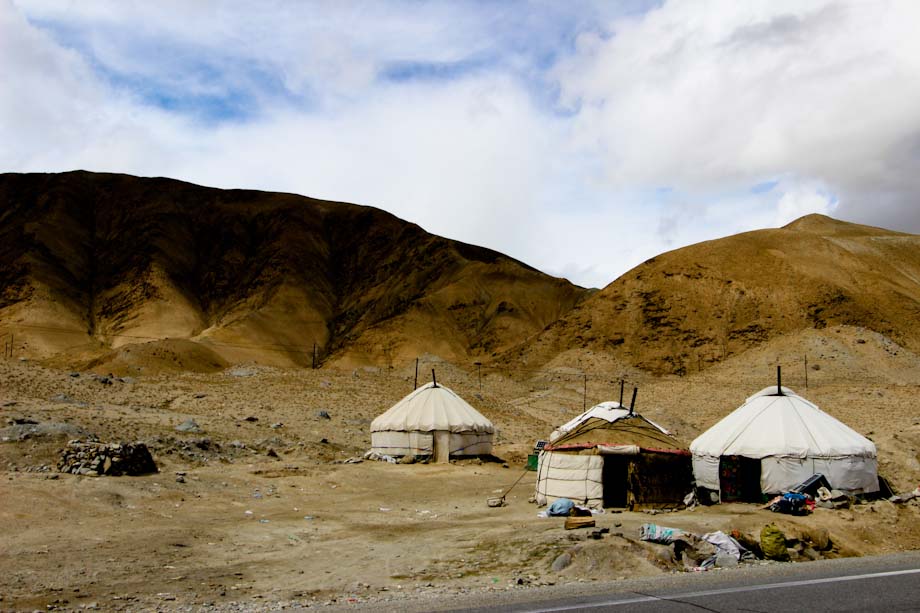 After lunch we keep going South till Karakul Lake, which represents the most famous touristic attraction of the Chinese side of the Karakorum Highway. If you wish you can even spend the night in a mongu bao (a Mongolian tent). 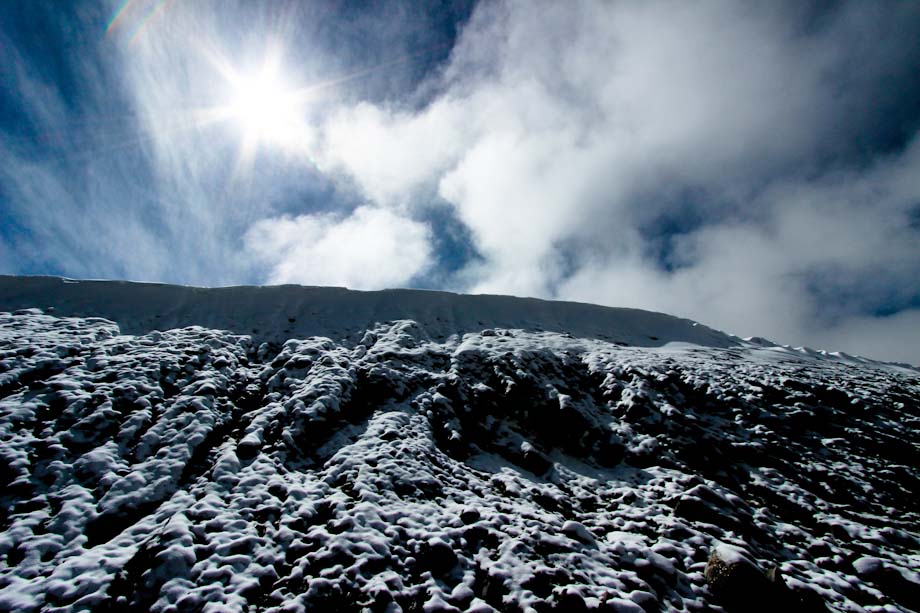 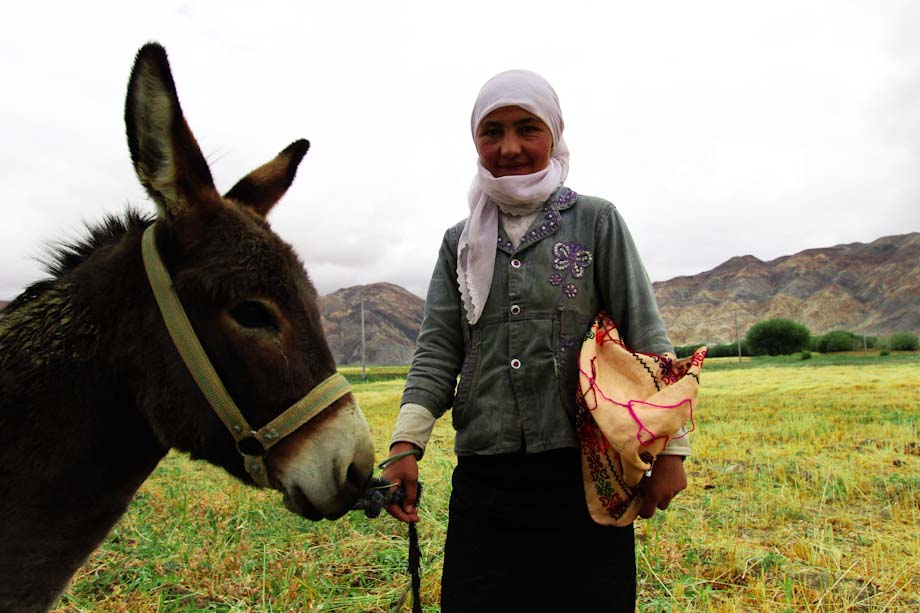 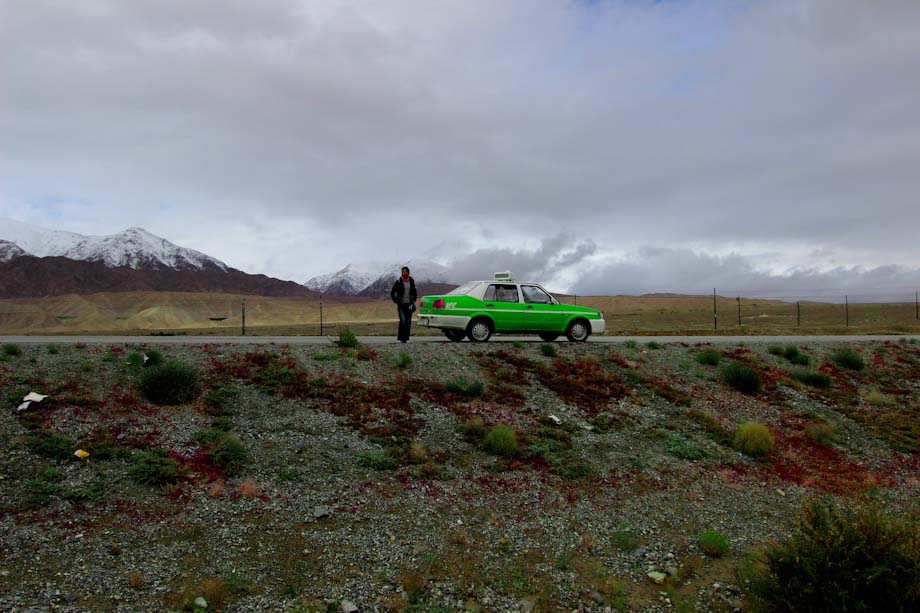 Before to reach Tashkurgan we still have time to walk on the snow, make friends a nice girl that will let Feng (my gf) ride her mule for free for some pics and take a (distant) portrait of our beloved taxi driver in front of the mountains. 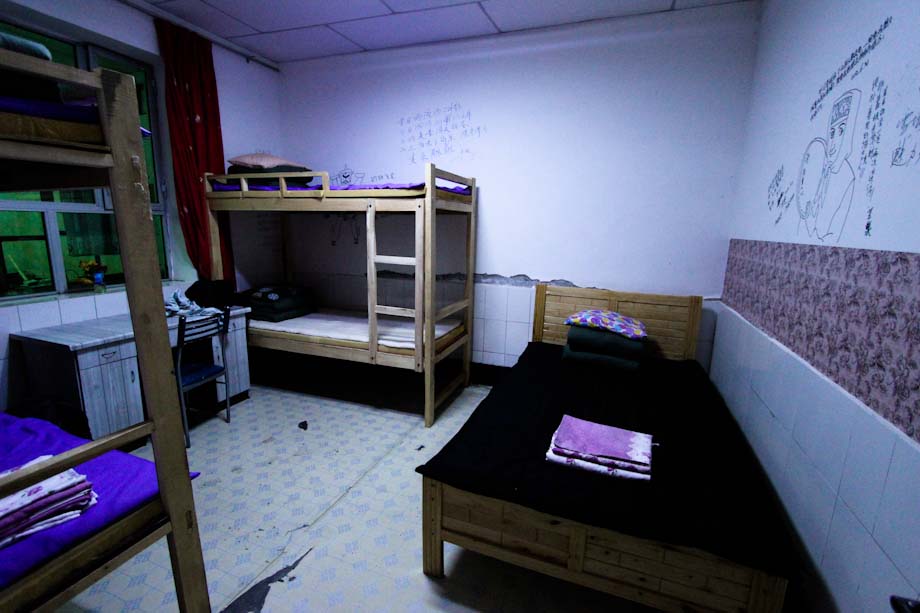 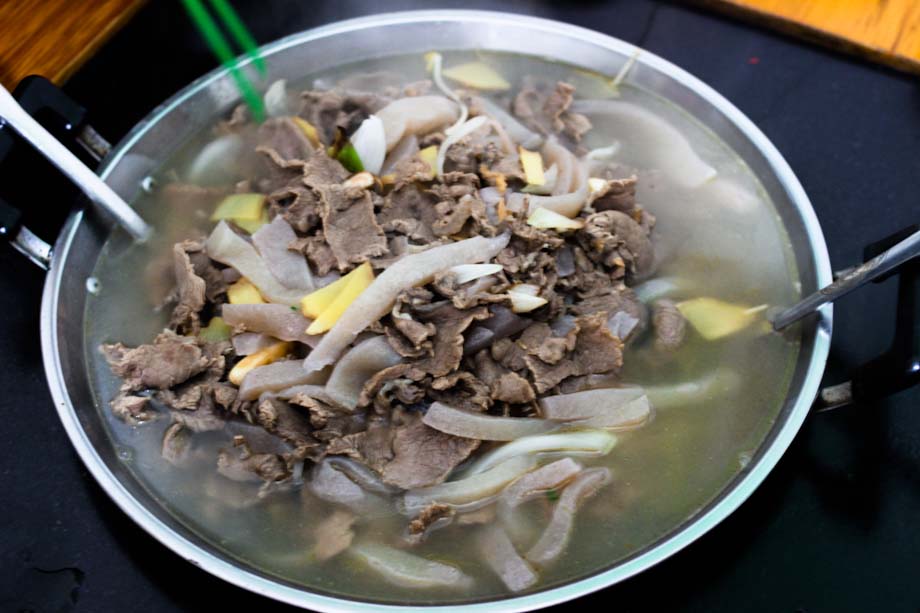 After the Karakul lake the population becomes Tajik. We arrive to Tashkurgan at about 8 p.m., look for an hostel and treat ourselves a well-deserved yak meat hot pot.