While we get on the night bus that will bring us to Hué I look at Jelen and tell her:

“I’m happy we are leaving Hanoi. I was craving a bit of peace.”

It wasn’t because of the insistence of the street vendors or the screams of the pseudo-backpackers that cross the world to get drunk in an hostel 24/7.

It was the traffic that exhausted me.

I had heard some horror stories about the traffic in Vietnam but I wasn’t prepared for it. I mean, I’ve spent the last two years and an half between Beijing and Shanghai.

What the hell could possibly affect me?

Heavy trucks that use you as a moving target like in Carmaggedon? Already seen.

Adolescents that don’t know the street signals and enjoy to drive their silent electrical scooters through the sidewalk? Done. And I curse one of them every other day.

Twelve line highways that you must cross almost running – the green light only lasts seven seconds – while avoiding the continuous stream of cars that arrives from your left because in China the vehicles can turn right even when the light is red? I do it every day.

But how does the traffic look like in Vietnam?

If you have already been to Vietnam or you watched the video at the beginning of the post you know that the main ingredient of the Vietnamese traffic are the scooters.

Biologists should start to study them because these scooters behave as a f*cking ecosystem. A flock of motorized bees ready to follow you anywhere as if you just destroyed their nest.

The drivers re-compact themselves at each red light, looking at each other with a mix of indifference and hate and trying to get the best spots on the starting line-up.

When the traffic light turns green they start up in a synchronized, almost romantic way (see photo story at the end of this article). They occupy all the street and if a car is brave enough to come in the opposite way they keep going.

Nobody slows down. It seems a medieval duel. And it’s only when you think that the crash is unavoidable that the metallic flock of scooters opens up to englobe the car. Fascinating.

Then the scooters start to leave the flock and move in any possible direction, no matters if it’s a sidewalk, a pedestrian street, an alley obviously too narrow for a motorbike (there are plenty in Hanoi and Saigon) or just another regular street. They will join another flock at the next red light. 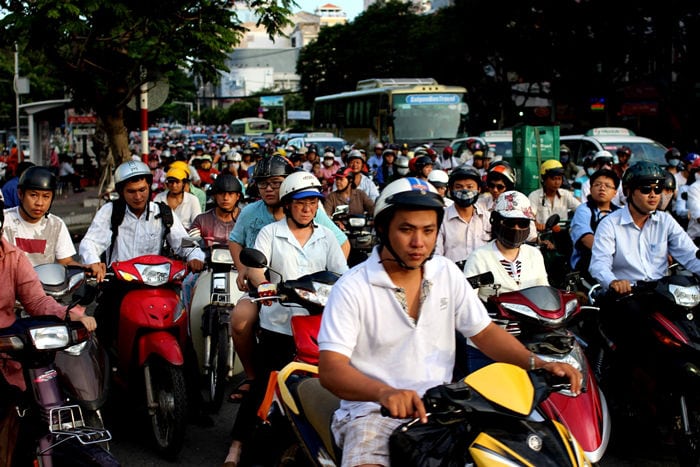 A typical gathering in front of a red light in Saigon, 2 p.m.

What if there is not traffic light whatsoever?

The main problem for the pedestrian is that traffic lights are extremely rare in Vietnam. Usually you have to cross the street knowing that nobody will stop. “To break” is not an action that Vietnamese drivers consider.

Don’t get me wrong. I don’t think that Vietnamese are mean. Well they are mean, it’s more correct to say that I understand their situation and I don’t blame them for being mean.

First they don’t have the culture of respecting pedestrians. Ignoring them is a socially accepted behavior. 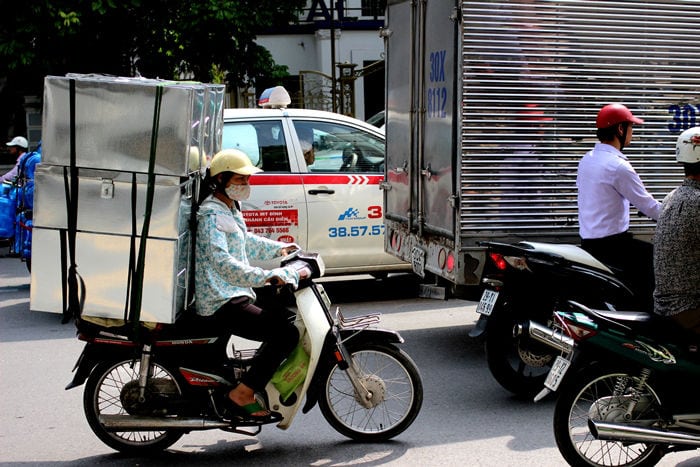 Just an example of what you can expect to see in each street of Hanoi.

Second, every driver knows that behind him there is at least another driver (or better a flock of other drivers) who is carrying heavy goods on the back of his scooter. He also knows that if he slows down for a pedestrian the driver behind him will only have two options: slowing down himself with the risk that the inertia of his goods will make him fall down or running over the scooter in front of his motorbike and hope to limit the damages.

It’s just the way it is. The Vietnamese don’t need a degree in statistics to understand that keep going in the hope that the pedestrian will be quick enough to avoid the scooters is the best choice.

So how do you cross the street?

You learn how to have faith. You start to walk and hope that the scooters that run in both directions will avoid you.

It’s important to keep in mind that, even if they never slow down, the drivers developed a sixth sense for avoiding the obstacles at the very last moment. The bad news is that sometimes they make a mistake.

I’ve never seen as many injured backpackers as in Vietnam. During the three weeks that I spent to cross the coast from Hanoi to Saigon it was normal to enter a hostel and see a blonde girl (or guy) watching the Olympics ping pong tournament with his brand new crutches resting on the couch. 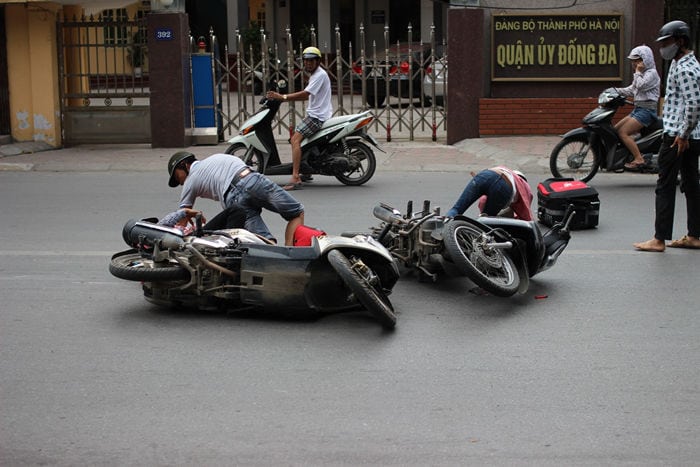 One of the accidents that I saw during my three days in Hanoi.

Besides having faith on the drivers skills, what can we do to survive?

What are the reasons of this crazy traffic?

In my opinion there are two main factors.

The lack of infrastructures

The most important factor is the complete lack of infrastructures. So far Hanoi and Saigon haven’t a subway system. Also, there are very few public buses and highways.

This means that people only can move by taxi, private car or motorbike.

Think about what it would become Beijing without the highway rings, bus and subway systems. Or if you’ve never been to Beijing think about the capital of your country without any public infrastructure. How would it be?

Finally, there are very few traffic lights in Vietnam. In most of cases the law of the jungle rules at the crossing roads. 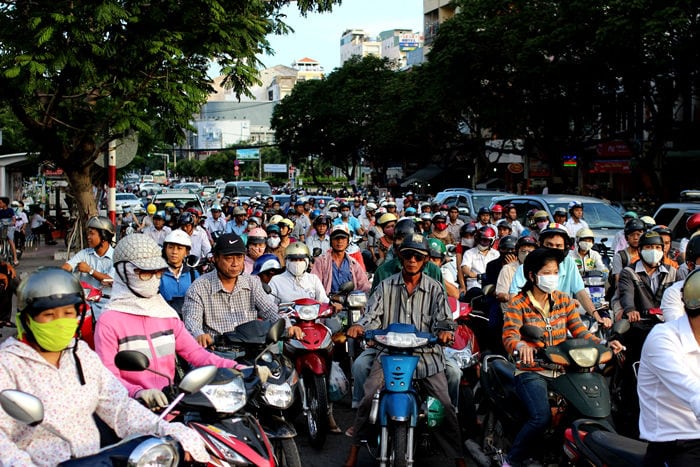 Another red light in Saigon.

The nature of the vehicles

Most of Vietnamese only have a scooter. While I was visiting the Mekong Delta our guide explain to me that this situation was created by the central government.

They judge that the country hasn’t enough infrastructures for surviving to an invasion of cars similar to the one that is happening in many other emerging countries. And I agree.

The motorways and the main streets of Hanoi and Saigon are too narrow. The second tier streets are are usually tiny alleys and no car can go in. Finally, there is no space whatsoever to park hundred of thousands of new cars.

So the government applied an high tax on the cars and only the rich citizens can afford one. My guide claimed that the tax is about the 200% of the price of the car. The percentage my be imprecise but you get the idea. Ordinary people buy scooters. Period. 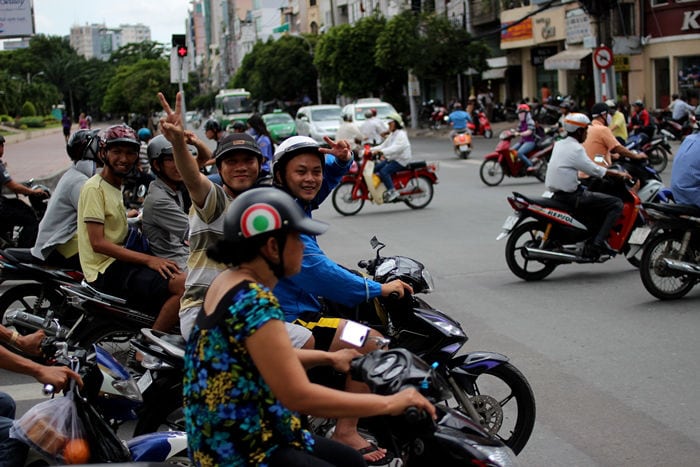 Two locals find the time to pose for a photo while driving in the district one of Saigon.

Given the lack of cars, people learned the art of optimizing their scooters.

Need to accompany your three kids to school? No problem, they can comfortable fit on your scooter and eat their breakfast at the same time.

Need to move from your old apartment in the District one of Saigon to a cheaper zone? No problem, you can transport your king size bed and fridge on your scooter. Better if only in a trip.

Now try to picture to yourself a street full of motorbikes in precarious equilibrium because they are transporting a whole family, a huge table or 200 liters of water. Don’t you think this would soon become a mess?

3, 2, 1… GO! A photo sequence of what happens when the light turns green 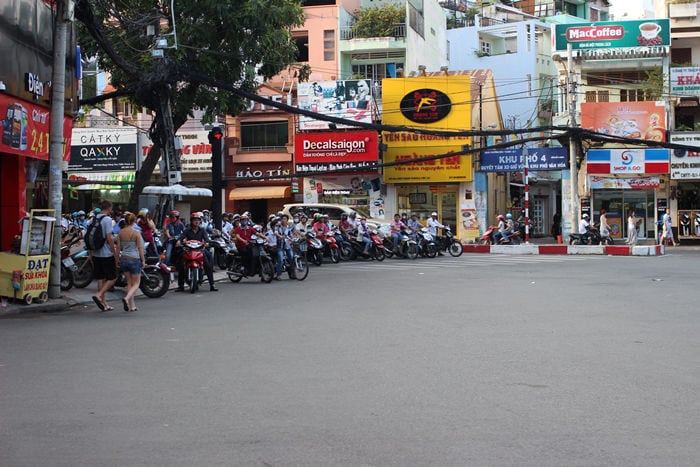 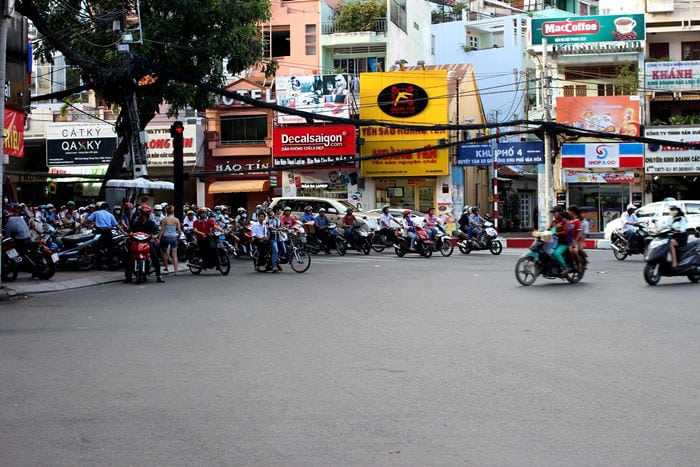 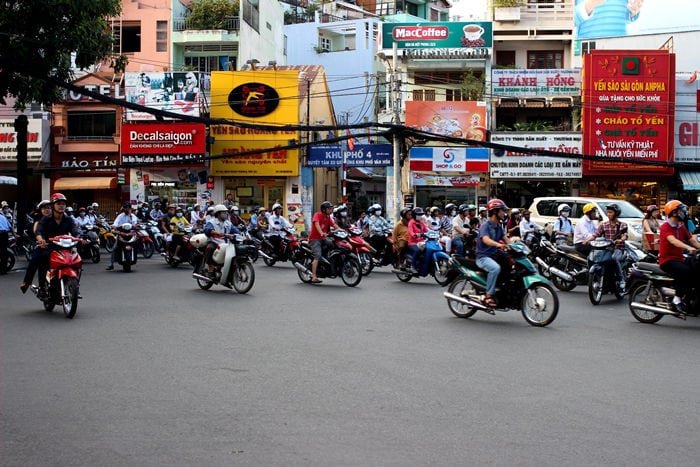 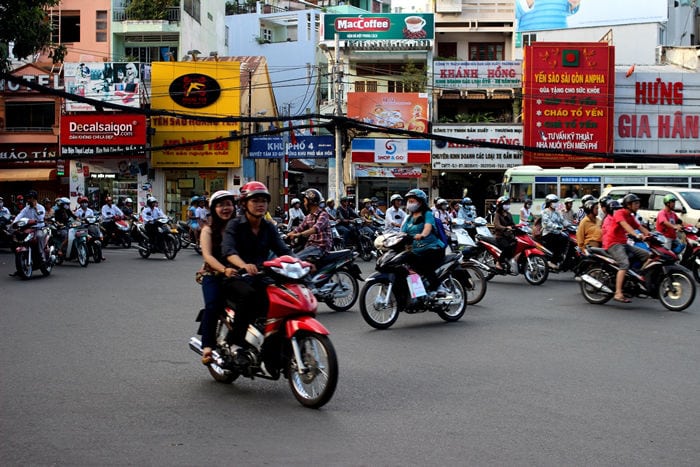 What is the town with the worst traffic you’ve ever seen?