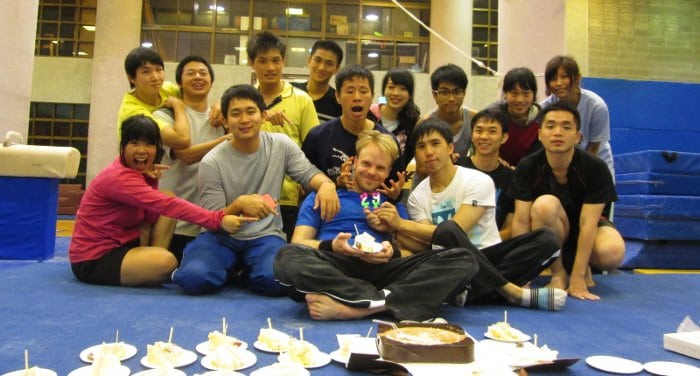 After almost a year we come back with our interviews to the superstars of Mandarin language, that this those people that not only are studying Mandarin but, through the internet, contribute to the always growing community of Chinese learners with their own wisdom.

Today we’ll talk with Olle Linge, a 30 years old Swedish guy that spent the last seven years learning Chinese (and how to teach it). Olle is the founder & soul of Hacking Chinese, one of my favorite website that focus on Chinese learning. But, as usual, we aren’t going to talk about how to learn Chinese…

Hacking Chinese was officially launched in the summer of 2010 and the goal was to create a place where I could share my thoughts on Chinese language education. I had already written quite a bit about this on my personal website earlier, but it took up more and more of my time and rather than cluttering my own site, I thought I’d create a new site which only dedicated to Chinese!

Is the goal still the same?

That was four years ago and a lot have happened since then. Back then, Chinese was still just something I did for fun. I still write/learn/teach mostly for fun, but I regard this more and more as my job rather than a side project. This is something I hope to be able to emphasise much more in the near future!

I know that building a fairly popular website without spending any money on ads or other promotions is difficult. What were your main challenges on making Hacking Chinese one of the most popular website about Chinese learning?

I think my main problem has been to overcome anxiety over that what I write isn’t good enough. I still have this problem when it comes to completely new areas, such as new services or products. It’s easy for me to do more of the same, but I’m much slower when it comes to moving in entirely new direction. My resource sharing section is an excellent exception where I have actually produced something entirely new that I hope will be genuinely useful for fellow students and teachers. 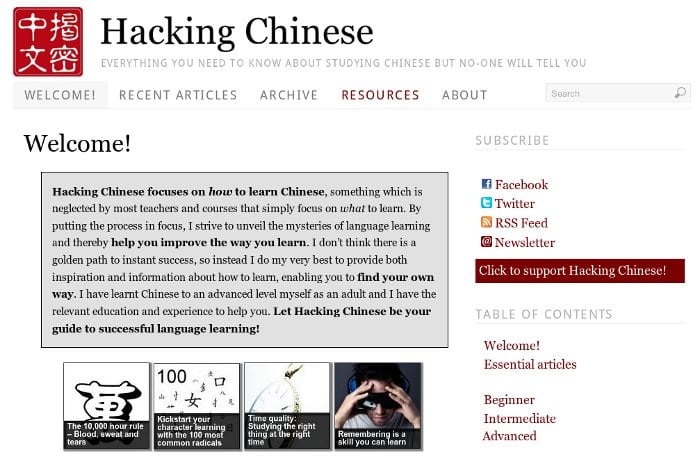 You just opened this new section of your website, called “Hacking Chinese Resources“. What is it, how it works and how people can participate?

Simply select your proficiency level, what kind of resource your looking for and you will find them all, sorted by popularity. You can also post your own resources, vote and discuss, but you need an invite from me to do that (anyone can get one simply by contacting me in some way).

So, what does “resource” mean here, you might ask. Well, it can be anything that is related to learning Chinese, including resource collections such as site with music videos, highlighted particular resources such as a video or an article you really like, information and advice about studying Chinese such as Hacking Chinese, tools and apps such as dictionaries and games, as well as courses and much more. There should be room for almost anything as long as it’s helpful for people who learn Chinese!

I know you’re enrolled in a master’s degree program in teaching Chinese as second language. Why shall somebody hire a Swedish teacher? What would be the advantages and drawbacks of this choice?

There are no particular advantages with a Swedish teacher in particular, of course, but there’s definitely a demand for non-native teachers. I think that anyone who has studied Chinese knows that teachers know a lot about some things and almost nothing about others.

When it comes to how to learn, what strategies to employ and how to design a personal curriculum, I’ve found that most native teachers simply have no clue. This is also true for some more theoretical aspects of Chinese, such as grammar and pronunciation analysis. I have learnt Chinese to an advanced level as an adult and i can teach you how to achieve that, too. 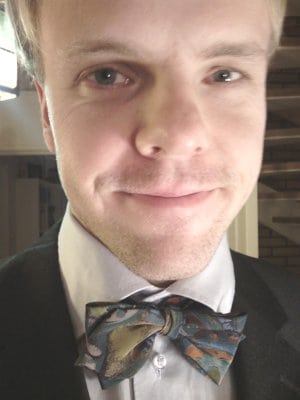 I noticed on your site that you offer yourself as language teacher and consultant. What kind of students hire you?

Most students hire me for pronunciation practice. I think this is because the average quality in this area in courses and schools is dismal (not enough time, education or resources), and the fact that I apply a scientific and systematic approach to pronunciation practice makes me desirable in the eyes of many students. I can also explain what’s really going on in fluent English, which is rarely the case for native speakers. I’ve also been hired a lot to help people create plans for tackling exams or courses.

After your master do you plan to become a regular teacher or start your own business related to Chinese teaching as John Pasden did?

I believe in the opportunity cloud; I plan to keep as many options open as possible and see where fate takes me. It’s my task to create opportunities, but I can’t control the future. I can see myself working as a teacher, consultant, researcher, translator, writer, educator and so on. All at once, perhaps?

Why did you choose to study in Taiwan instead of going to Mainland China?

I have spent a total of four years in Taiwan now, but I came here in two rounds for different reasons. The first time, it was mostly because of a scholarship and I didn’t even plan to go abroad at all before receiving the scholarship. It was all pretty random. The second time, I returned to Taiwan because I think it’s a great country populated by a fantastic people. It’s also a free and open country which feels closer to the world in general while still remaining firmly Chinese when it comes to culture. It’s a nice place to live in general.

Have you ever been to Mainland China? If so, what are the most remarkable differences you noticed between Chinese and Taiwanese people?

I’ve only been in China as a tourist so I’m in no position to make balanced comparisons. The immediate differences are very superficial, such as worse air quality, people spitting everywhere and being loud in restaurants. I’m sure these are only superficial differences that stand out mostly because of their absence in Taiwan (apart from air pollution, which we get here too, although not as much). I would probably like China if I ever chose to live there as well, but I would be worried about pollution.

As unhealthy as it is, I still have to say 雞排 (fried chicken).

What you miss the most from Europe, beside your family and friends?

I won’t ask you any question about “How to learn Chinese” because you already wrote a whole website on the topic. So I’ll close this interview with the following question: After seven years of study, what is your greatest weakness about Mandarin language?

Olle, thanks a lot for the interview and good luck with all your projects!