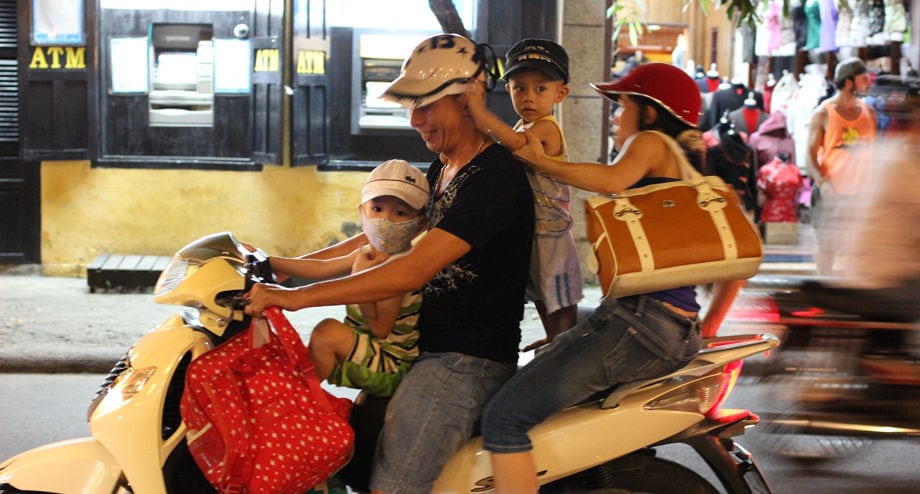 Before arriving in Vietnam I was expecting a country similar to southwest China with less pollution and more scooters. And I was right!

No, wait, I’m just joking. There are a lot of differences between China and Vietnam.

In this post I would like to underline ten habits of Vietnamese that surprised me (keep in mind this is the first time I visited South East Asia).

But lets the images talk!

Who says you need a car to grow a family?

In Vietnam, few people have a car and public transportation is quite poor. Hence people learned how to optimize the space on their scooter (see the above image).

Do you really need to rent a room to start a business? 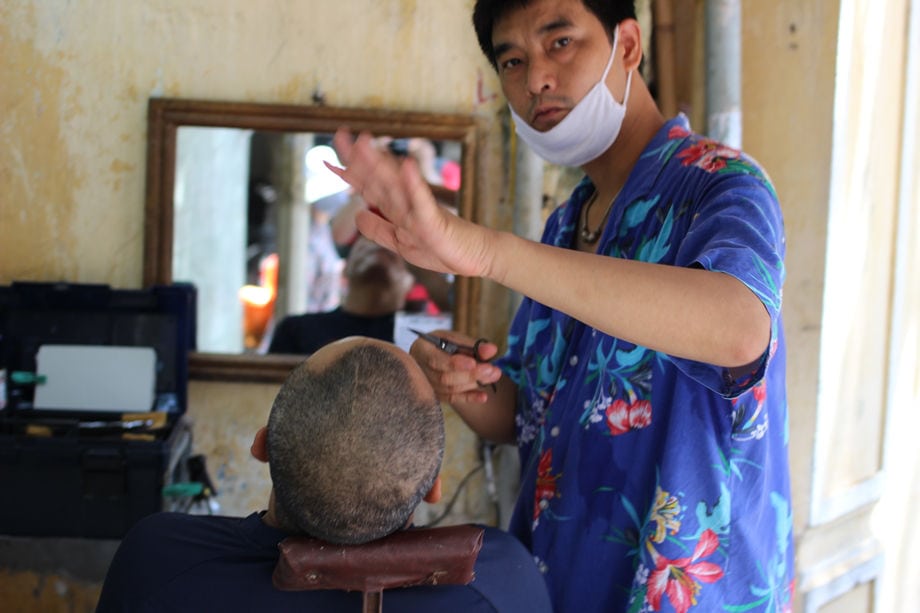 Walking around the old neighborhoods of Hanoi it’s not difficult to stumble upon any sort of street business. This man, for instance, opened a barbershop on the sidewalk. Despite this fact, he seems to care about his customers’ privacy. Contradictory. 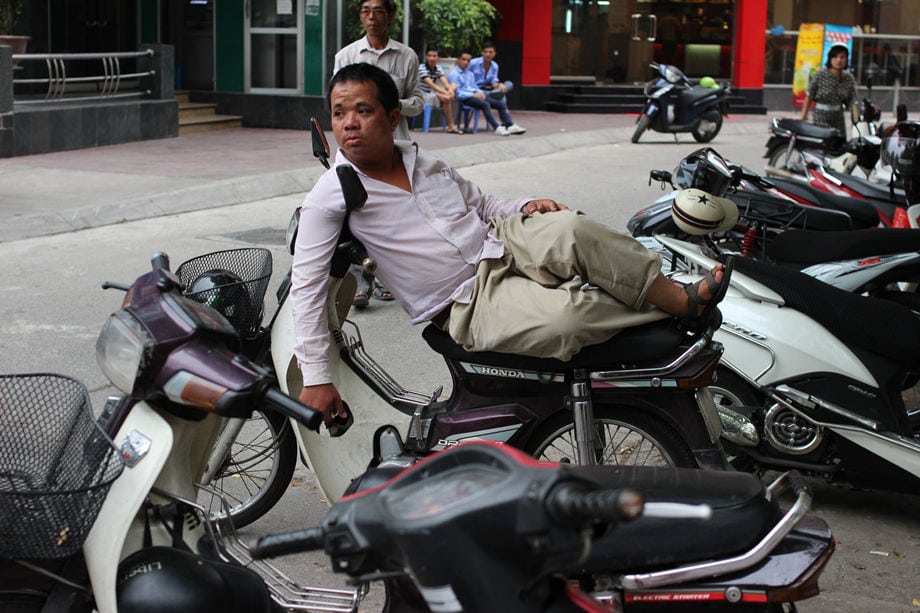 Vietnamese are able to perform any sort of action by keeping the equilibrium on their scooter. Reading a newspaper, eating noodles, sleeping, or just watching the tourists (as the guy in the photo above) are just some of the most common on-the-scooter activities. Amazing

How to transport anything in a scooter 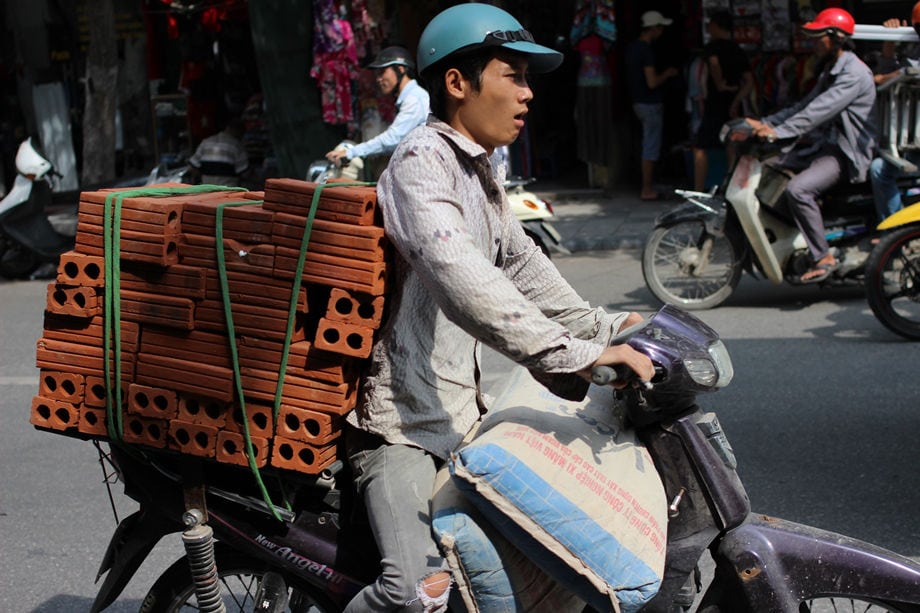 Not only they can fit their whole family in a scooter, but Vietnamese also have the ability to transport virtually anything on it. The only problem of this funambulistic performance is that to keep the goods in equilibrium they cannot stop. In fact, they cannot even slow down… 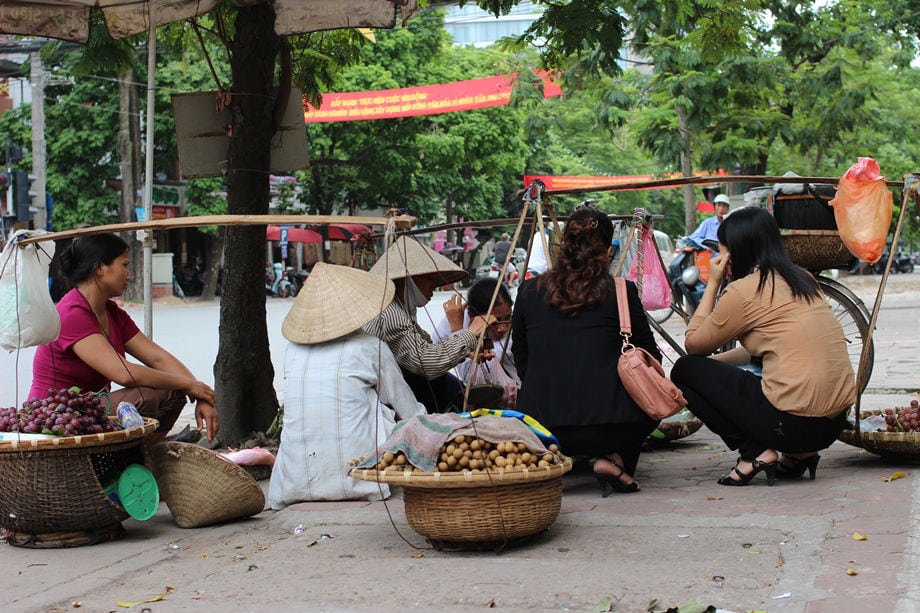 If you have traveled around Asia, you will already know how much Asian people love the squat position (not only at the toilet!). However, I found Vietnamese taking the “squat affair” much more seriously than Chinese people. In the above photo, for instance, customers and vendors carried out the entire bargaining-buying process of fruit in the squat position! 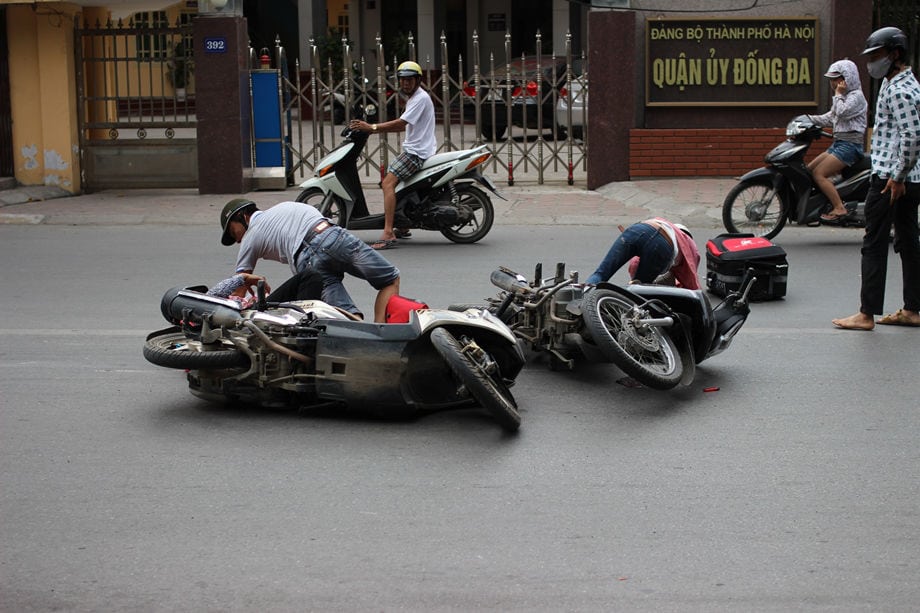 Especially in Hanoi and Saigon, it’s quite common to assist in a motorbike accident. This is normal if you consider that Vietnamese drivers never stop. Sometimes they cannot even consider the possibility of stopping because by losing inertia the heavy goods they are transporting will collapse and drag the scooter on the tarmac with them.

Instead of slowing down, Vietnamese prefer to avoid obstacles by keeping the same speed or, when they estimate it can help, accelerating. The only problem is that this strategy often fails to provoke an accident as in the photo. 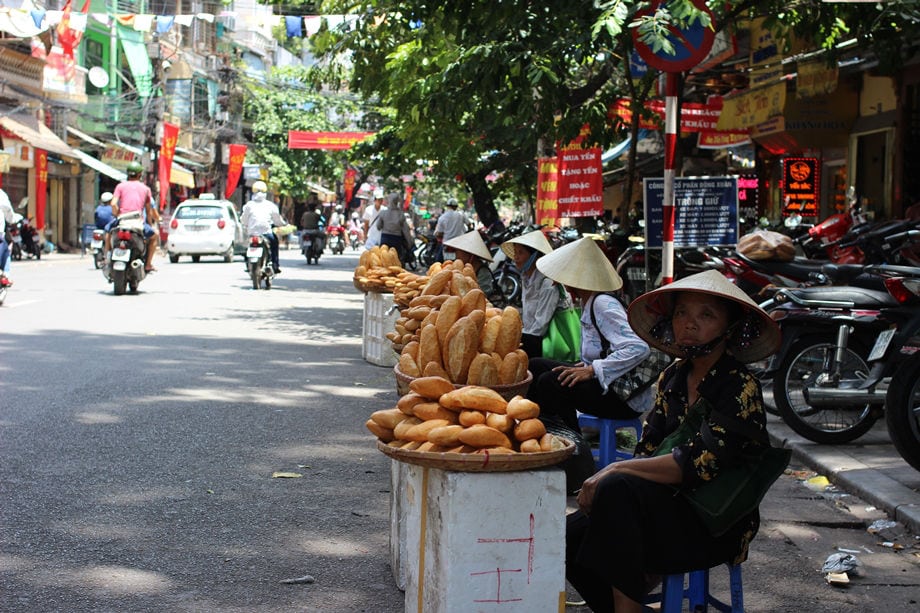 French people didn’t leave much wealth when they were kicked out of Vietnam. However, they left the tradition of coffee and baguettes! Hilarious.

What to do if you don’t have a scooter? 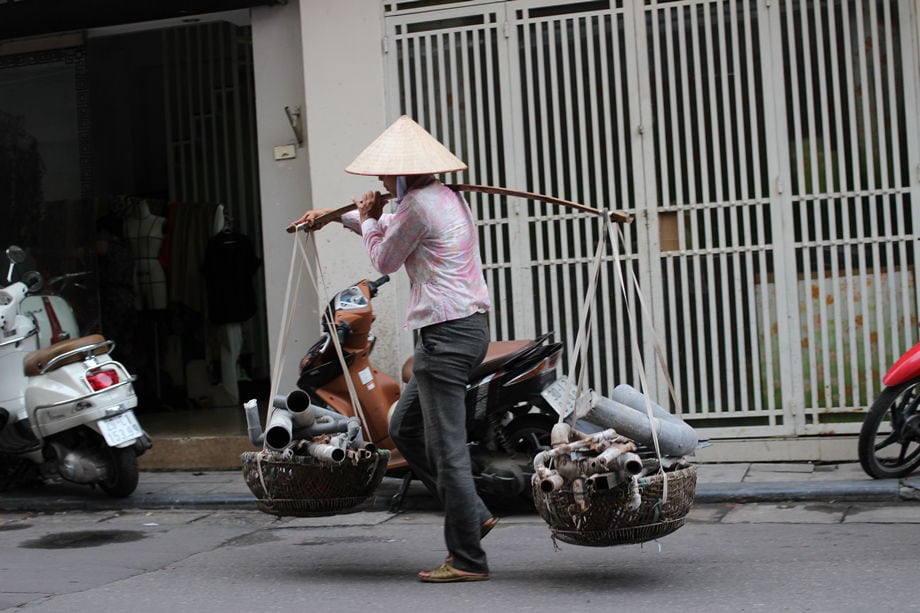 In Vietnam the most common way of transportation (after a scooter) is a balance kept in equilibrium in a shoulder. I did see Chinese people using a similar tool (especially in Guangxi province). However, I had never seen a girl walking around with pipelines or other building materials on it. 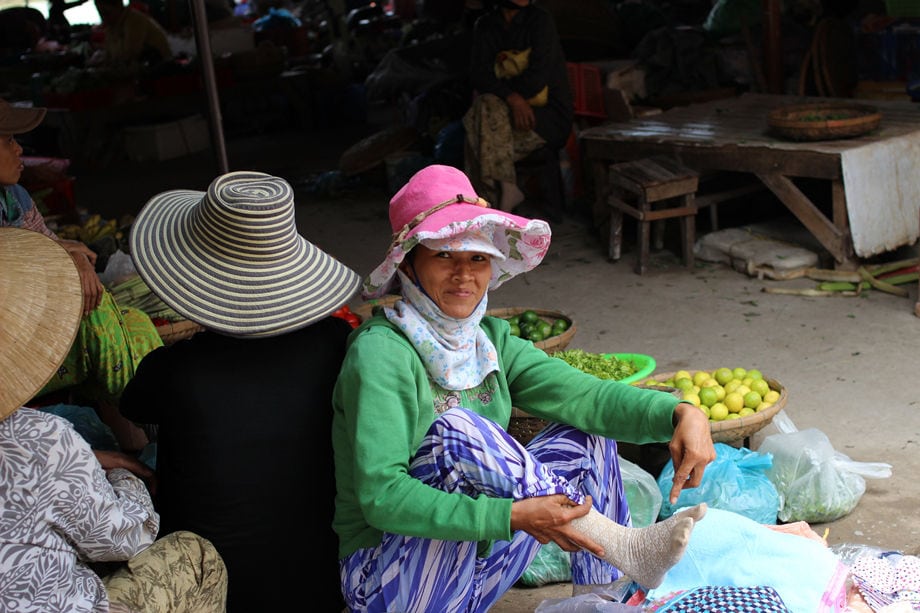 In Vietnam, virtually everybody will try to sell you something. I know this happens (as for the unconventional ways to transport building materials and so on) because it’s a very poor country.

So I try my best to avoid getting annoyed even if every guy on the street is trying to sell me fruit/photocopied-novels(?!)/fake-D&G-sunglasses/a-ride-on-his-scooter/whatever.

I must say Vietnamese vendors are full of inventive (especially in the most touristic spots as Halong Bay, Hoi An, or Nha Trang). For instance, the girl in the photo above was trying to sell me socks at the fish market. Her selling strategy was to point her dirty socks. Masochist.

I don’t get this one 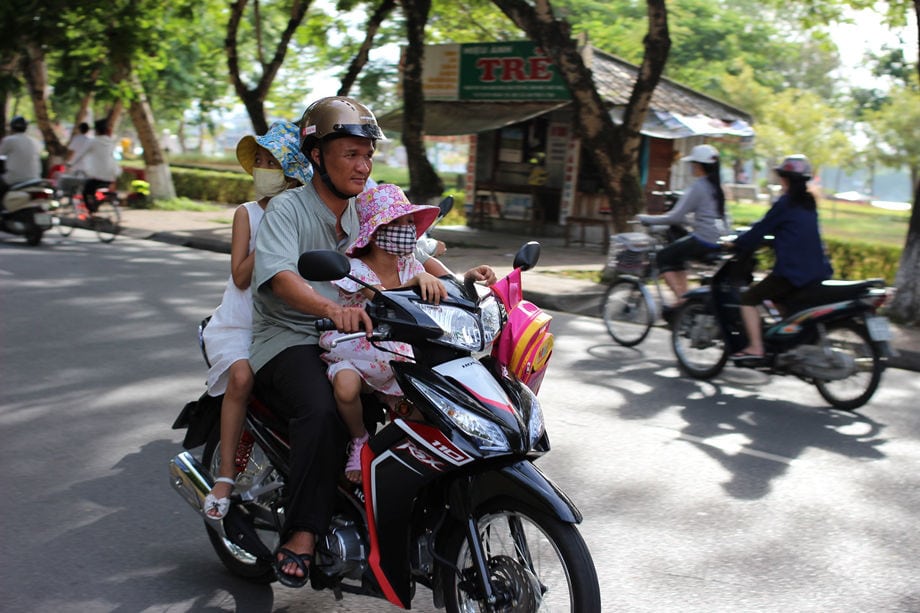 In Vietnam, it’s common to see an adult in a scooter with his kid. The problem is that often the adult is wearing a helmet while the kid is not. Weird.