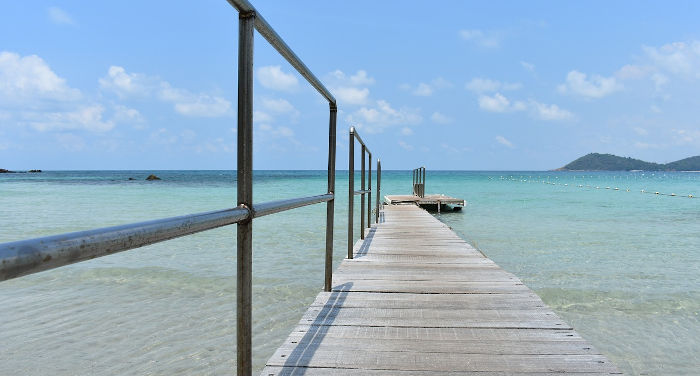 Koh Samet (often written also as Koh Samed) is one of the closest and easily reached islands to Bangkok. Located only 175 kilometers from the capital, the island is also called Koh Kaew Phitsadan by the Thais, which means “Jewel Island”.

Despite not being as touristy as Phuket or Phi Phi Island, Koh Samet is frequently visited by local tourists and foreign residents from Bangkok, who escape for just a weekend from the chaotic life of the city.

There’s no one best time of the year to visit the island since it has a dry climate all year long. It’s for this reason in fact, that Koh Samet is a popular destination during the months when monsoons strike the majority of Thailand, namely May to the end of October.

The island’s beaches are composed of white sand and clear water. Nature is master here, even if imposing luxury resorts are sprouting up like mushrooms, especially near the biggest beaches.

The only beaches where you can sunbathe and take a dip are those on the eastern coast. On the other side of the island there are no beaches but rather rocks that make water sports practically impossible.

Due to its wonderful beaches and tropical nature, Koh Samet was declared as a Thai national park, and as such, as soon as you get off the boat onto the beach at Haad Sai Kaew, you’ll see a local policeman who will ask you to donate (it’s mandatory) 220 THB to support the park. END_OF_DOCUMENT_TOKEN_TO_BE_REPLACED

Koh Samet is the closest island to Bangkok and a popular weekend destination for the residents of the Thai Capital. Here you’ll find a selection of some of the best hotels in the island for all kinds of budgets. 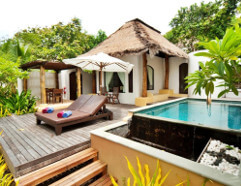 Offering beach front pool and garden view villas, The Paradee Resort is one of the top beach resorts in Koh Samet with 40 guestrooms. The resort is on the beach offering easy access to Sun, sand, and sea. It is also closely located to many other beaches with distance ranging between 0.9 km and 4km. The resort features a full serviced spa, fitness center, outdoor pool, and business center. The resort’s private beach is spotlessly clean and is equipped with beach umbrellas. The hotel‘s English speaking staff welcomes its guests with welcome drinks and are very courteous to make the stay truly relaxing by attending to every little need of their guests. The villas are equipped with modern amenities and feature comfy beds with gorgeous views. The hotel provides free Wi-Fi only in public area and not in rooms. In addition, guests can enjoy motorized water sports at the beach to add to their entertainment.